While the AMD Zen 2 architecture was unveiled at CES 2020, the top lineup of Ryzen 9 H processors have been left out of the initial announcement and only officially launched as of mid-March 2020.

We’re not going to discuss benchmark results in this article, but you can find our detailed review of the Ryzen 9 4900HS powered Zephyrus G14 via this link, and we’ll update once more 4900HS and 4900H options are available.

Instead, we’ll tell you what to expect from the Ryzen 9 HS APUs and how they differ from the existing Ryzen 7 4800H/4800HS mid-range variants, as well as compile a detailed list of all the available Ryzen 9 4900H/4900HS laptops that you’ll find in stores in the months to come.

So first off, here’s a quick specs sheet of the Zen 2 Ryzen H 7 and 9 processors:

In very few words, Ryzen 9 APUs are very similar to their Ryzen 7 counterparts, with a few small differences:

The number of cores and threads, Cache, memory support, or PCIe lanes are identical between the two, as well as the slew of optimizations and improvements the Zen 2 platform offers over the previous Zen 3000 lineup.

That being said, Ryzen 9 APUs might not seem like much of an upgrade over the Ryzen 7 models, especially since the GPU part shouldn’t weigh much in this case, as pretty much all Ryzen 9 configurations will include a dedicated dGPU that will negate the iGPU’s impact in demanding graphics loads.

However, there are a few other aspects to consider here. There’s a good chance Ryzen 9 platforms will be implemented into higher-tier products, where Ryzen 7 configurations might not be offered. Then, OEMs will most likely offer variable power profiles for these APUs and allow them to run at higher TDPs when needed, thus return improved performance, and we might see better optimization on those higher-tier higher-margin Ryzen 9 configurations. Furthermore, pricing is going to be important: a big gap between 4800H and 4900H configurations will make the latter a hard-sell, but a smaller increase and customers will favor the 9s just to get the higher-tier product and gladly pay a small premium for it.

Anyway, we’ll know more about the real value-increase of these Ryzen 9 4900H and 4900HS APUs once SKUs are launched and we get to test a few of them. They’ve been announced for Q2 2020 from multiple OEMs including Asus, Dell, Acer or Lenovo. For what is worth, though, AMD’s marketing materials claim solid productivity and gaming results for the Zephyrus G14 in the Ryzen 9 4900 HS + RTX 2060 65W (Max-Q) configuration, as illustrated below, but these are AMD’s test results and should be taken with a grain of salt until they’re verified by our tests (and other reputable 3rd party reviewers).

Update: Our detailed review of the Ryzen 9 4900HS powered Zephyrus G14 is available via this link. 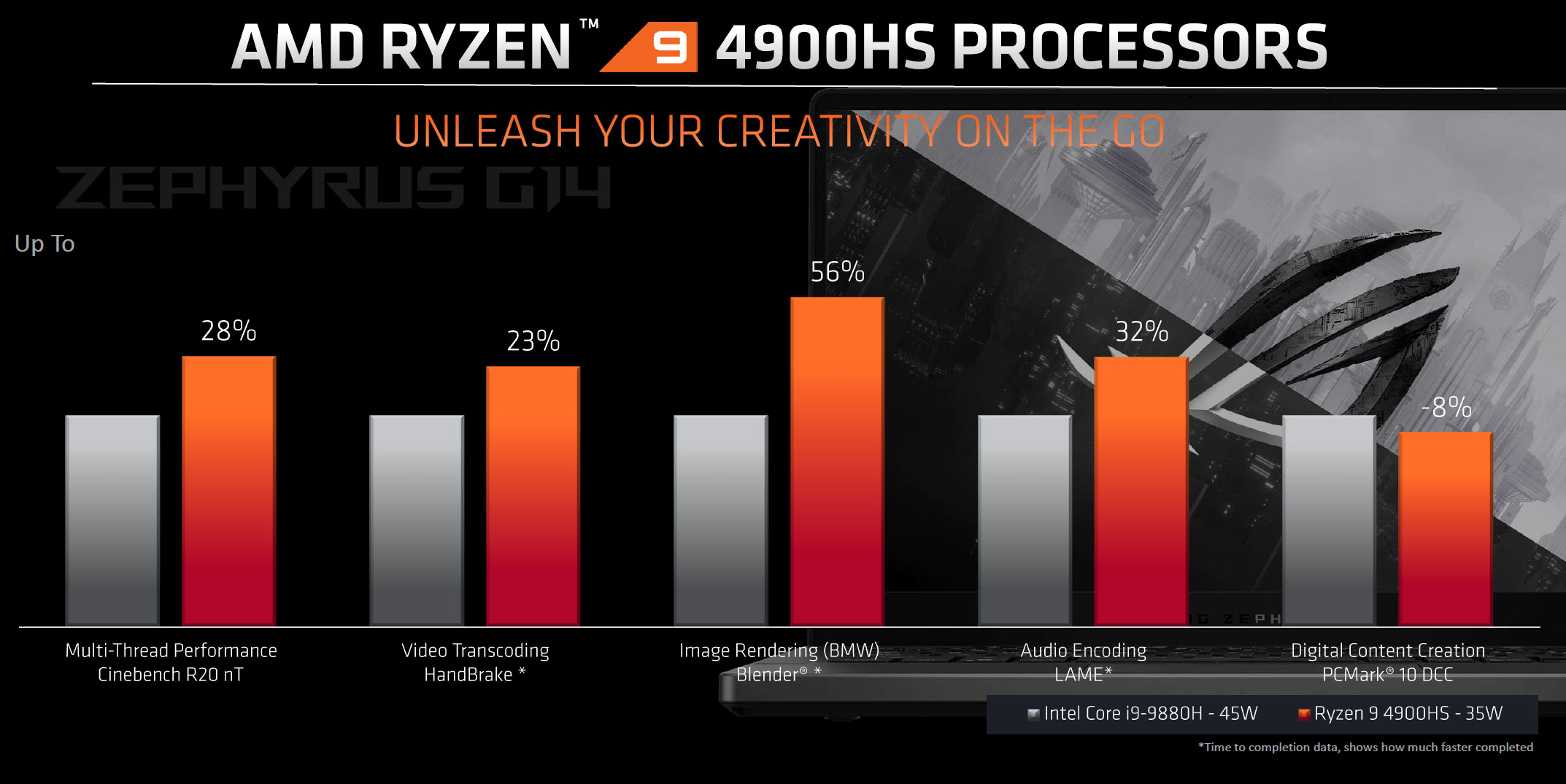 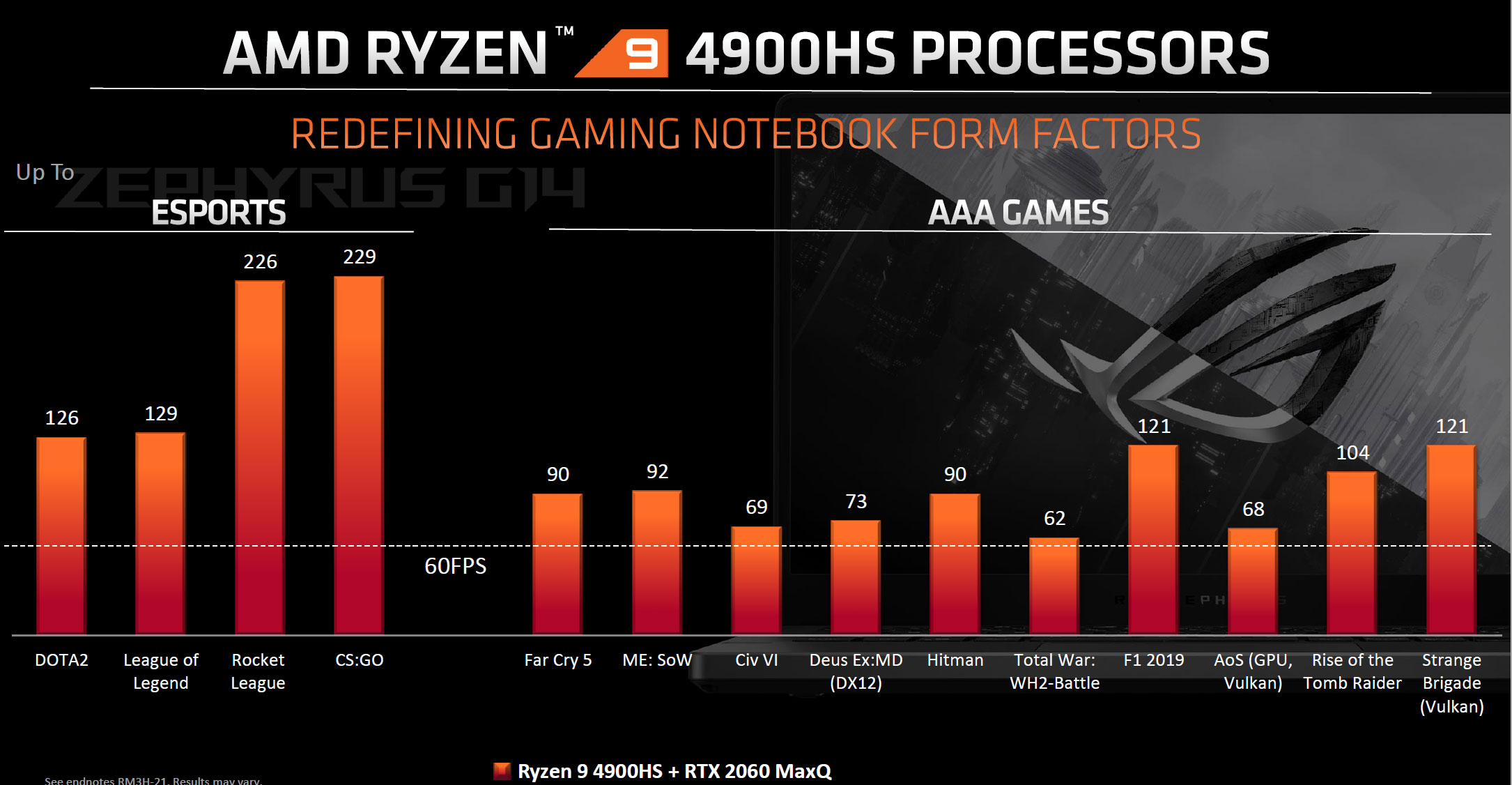 For now, here are the lists of rumored or announced Ryzen 9 4900HS and Ryzen 9 4900H notebooks. This is a work in progress and we’re constantly updating it with new entries as they are launched, so if you spot something that should be in here and is not, please tell us about it in the comments sections at the end of the post.

This section is reserved for the lightweight and portable products built on either the full-power Ryzen 9 4900H 45W or the more efficient 35W Ryzen 9 4900HS implementation.

Asus have exclusive access to the AMD Ryzen HS hardware for the time being (up to Q3 2020), and we’ll update once more Ryzen 9 4900HS ultraportables are available.

This section includes the full-size notebooks built on the 45W Ryzen 9 4900H hardware platform. Keep in mind that part of this is based on rumors at this point, and these Ryzen 9 4900H are not yet available in stores at the time of this update.

Please keep in mind that we’re constantly working on updating these lists and adding new products as they are released, but errors might slip in despite our best effort to keep things accurate. If you spot any mistake or any product that should be in here and is not, please get in touch in the comments section down below.

Furthermore, if you’re interested in the wider range of Ryzen 7 4800H/4800HS mid-range laptops that are available in stores these days, you’ll find them listed in this separate detailed article. Furthermore, we’ve also reviewed most of the available Ryzen 4000 products here on the site, as well as compared the performance and benchmarks of the several Ryzen H processors and their Intel counterparts in these articles: one and two.

Disclaimer: Our content is reader-supported. If you buy through some of the links on our site, we may earn an affiliate commission. Learn more.
Andrei Girbea, Editor-in-Chief of Ultrabookreview.com. I've been covering mobile computers since the 2000s and you'll mostly find reviews and thorough guides written by me here on the site.
← Previous Story AMD Ryzen 7 4800H/4800HS and 4600H/4600HS laptops – the complete list
Next Story → The complete list of Intel Core i9 laptops (10980HK/10980H, 9880HK/9980H options)