This article is a first look at the 2022 updates of the highly-popular Lenovo Legion 5 and 5 Pro series of gaming/performance laptops.

We’ve reviewed these Legions in multiple configurations over the past years and we consider them among the best-value products in their classes, especially in the mid-tier configurations. You’ll find all our previous reviews here.

For the 2022 models, Lenovo are bumping the hardware specs on both the Legion 5 Pro and the Legion 5 to the latest AMD, Intel, and Nvidia specs, with support for DDR5 memory and faster storage and connectivity. They’re also updating the power settings and the screen options on the two series.

Specs aside, the 2022 Legion 5 Pro gen7 is only a slight refinement of the gen6 model from 2021, but the base-tier Legion 5 gen7 has been completely revamped. The plastic chassis has been replaced with a metallic build, the laptop is overall smaller in size than in the past, the thermal module has been refined, the IO has been updated, and a QHD screen option is now available for most configurations.

Update: If interested, here are our thoughts on the updated 2023 Lenovo Legion Pro 5 and Pro 5i models.

We’ll get in-depth further down, but first, here’s a quick look at the specs sheets of these two 2022 Legion 5 models.

Aside from the performance and efficiency differences between the two platforms, which we’ll be able to properly assess once we get our hands on the review units, there are also a few other specific differences between the two. Among those, there’s the exclusive support for Thunderbolt 4 only on the Intel models, as well as the fact that both M.2 storage slots support PCIe gen4 speeds on the Intel models, and only one is PCIe gen4 capable on the AMD variants. Most of these tech details should not make a significant difference with actual use, but you should still be aware of them when deciding on the two options.

We’ll briefly go over this one as not a lot has changed from the 2021 generation, as already mentioned earlier.

Internally, it looks like Lenovo decided to offer an RTX 3080-class configuration for the 5 Pro gen7 series, while the previous versions could only be configured up to a 3070. It’s the full-power implementation that can go up to 165W with Dynamic Boost, which was previously an exclusive for the Legion 7 lineup. No word on the 2022 Legion 7 yet, which is probably why Lenovo pushed the upper GPU to the 5 Pro as well – a Legion 7 update is also available now, and we’ve covered it in this separate article.

Lenovo also mentioned an updated CoolFront 4.0 cooling module on the 5 Pro with additional heatpipes and larger exhausts, required to match the higher-power GPU. Don’t forget that this does not get the vapor-chamber cooling module that’s available on the Legion 7s, and that might impact the overall thermals and performance with the 3080 configurations. The beefier thermal design should be a welcomed update on the 125-140W 3060 and 135-150W 3070 configurations, which I still expect to be the better value options in this chassis. 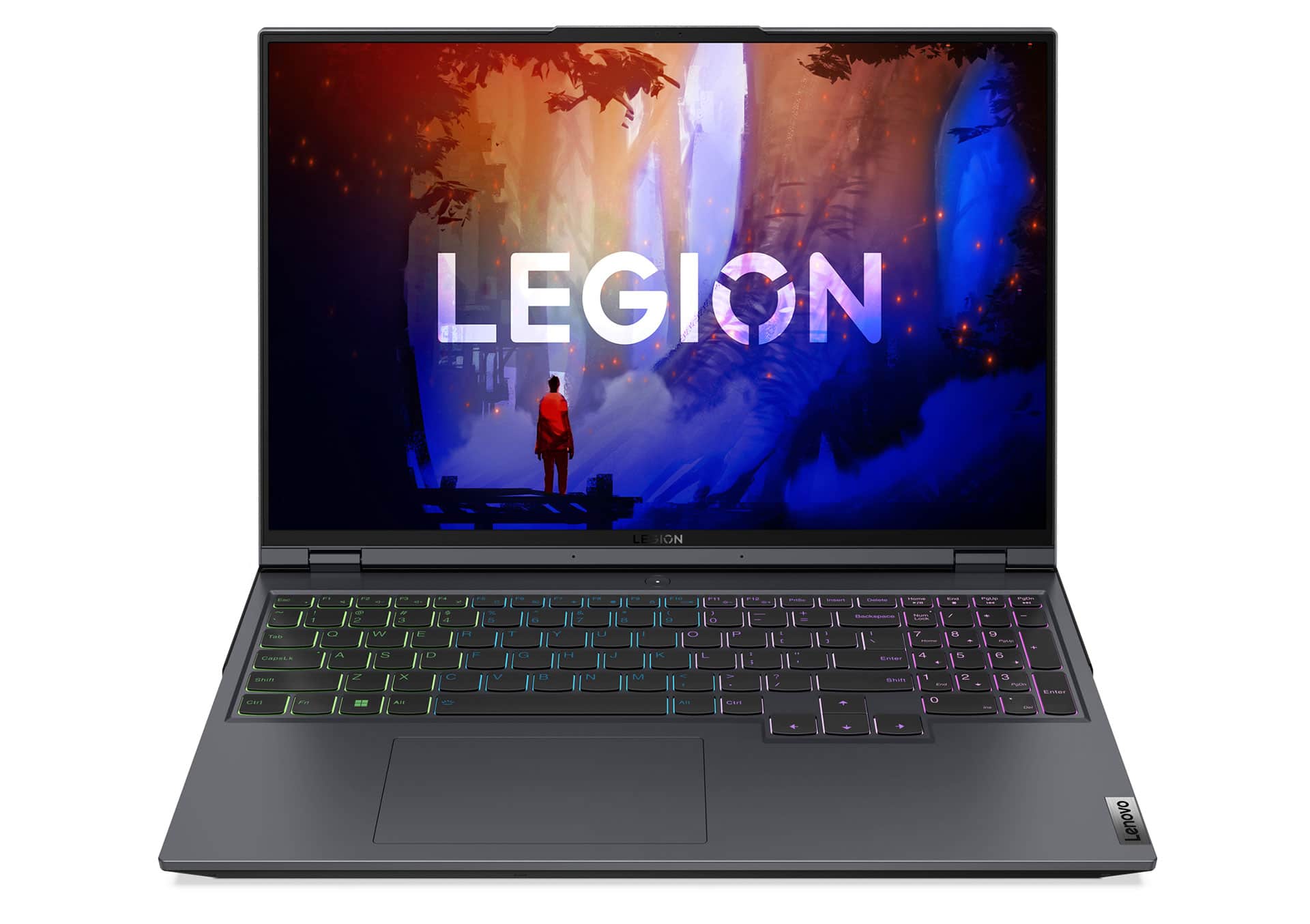 That aside, there’s still the same 80Wh battery on the 5 Pro series, with quick charging that allows to fill up to 80-percent in only around 30 minutes, plus support for PowerDelibery via USB-C. As a novelty for the 2022 model, USB-C charging is now possible at up to 135W of power, with a supported charger (Lenovo launched a compatible 135W GAN charger that you can get).

Another update that might not be immediately noticed is the new panel offered with the 2022 Legion 5 Pro lineups. It’s still 16-inch matte with a 16:10 aspect ratio, QHD+ resolution, and 100% sRGB colors, but it’s a little brighter than before at 500+ nits of peak brightness, a little faster at up to 240Hz refresh rate, and will support VRR – variable refresh rate with a later BIOS update towards the middle of the year. VRR technology has been available for TVs and monitors for a while now, but so far has not been implemented on the internal displays of laptops. It’s meant to completely eliminate tearing without any of the side effects of GSync or Adaptive Sync.

On the other hand, there’s no high-gamut display option on the 5 Pro series, something those of you looking for a balanced work/play computer might have appreciated. 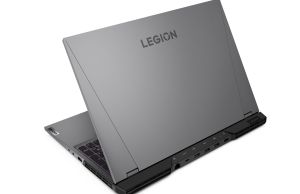 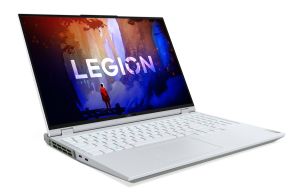 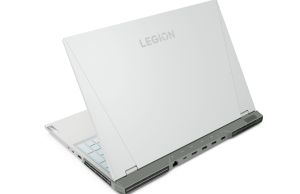 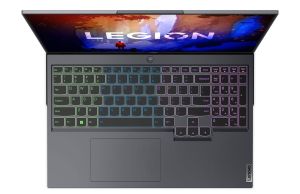 The construction and overall features of the 2022 5 Pros are mostly similar to the 2021 models, with aluminum-magnesium alloys used for the external case, the same 4-zone RGB Truestrike keyboard, and a plastic clickpad. You can also still get these notebooks in either a white/silver variant with a white keyboard or a gray variant with a dark-gray keyboard. The white one sure looks spectacular, but the keyboard is more practical in the black variant, thanks to the enhanced contrast with the illumination switched on.

I did notice a slight redesign of the lid and the IO. The A-panel looks much more professional now, as the backlit Y logo has been replaced with a cleaner design and the same kind of Legion branding we’ve been accustomed to on the Legion 5 and 7 series.

As for the IO, there’s one less USB-A slot on the back of the laptop, and there are now 2x USB-C slots on the left edge, with one of them being Thunderbolt 4 capable on the Intel variants, but only USB 3.2 on the AMD models. The audio jack has also been moved to the right side as a result, next to the e-Shutter button – not a fan of this change, as I prefer not having any cables around my mouse area at the right side of the laptop.

I would have also hoped for some sort of update on the audio and camera, as those were among my complaints with the previous generation, but I’m not seeing them mentioned in the press release. They might have replaced the camera with a FHD module, though, since that’s now available for the base Legion 5 2022 generation. We’ll need to further look into this detail and update.

Hopefully, the power profiles have been tweaked as well, there was some room for improvement there – Lenovo mention the Intelligent Mode where a refined AI Engine juggles with the power and fan settings in order to maximize the performance and comfort, but we’ll have to see how this performs in real-use once we get the review units. I’d also expect a better published Silent mode, given the inconsistencies we had on both the 2021 Legion 5 and Legion 5 Pro models in our reviews.

All in all, Lenovo refined what was already an excellent gaming/performance laptop with this 2022 Legion 5 Pro lineup, cleaning up the design and updating the hardware specs. This will for sure remain a highly popular product in its class.

The Intel-based 2022 Legion 5i Pro series is expected in stores around February, starting at $1500+ MSRP for most likely a Core i7 + 3060 configuration. The AMD-based Legion 5 Pro will be available later in the year, around April, from $1400+.

Lenovo have revamped the 2022 Legion 5 design across the board.

On the outside, aluminum alloys are now replacing the plastic case of the previous generation, available in two shades of grey and with clean branding elements. The overall chassis is now 15% thinner than in the past, but the overall weight remained constant at 2.4+ kilos due to the heavier metals used for the construction and the internal redesign.

Part of the internal changes are about a revamped thermal module meant to reduce the overall system noise in demanding loads, while not sacrificing the performance. Lenovo mentions up to 40% higher capacity fans and 45% larger radiators on these 2022 Legion 5s, as well as unobstructed air-intakes on the underside with taller rubber feet, and all these should allow the fans to run quieter. This would be a much-appreciated update, as the 2021 Legions did ramp up at 50+ dB with games and taxing workloads on the Performance profiles. 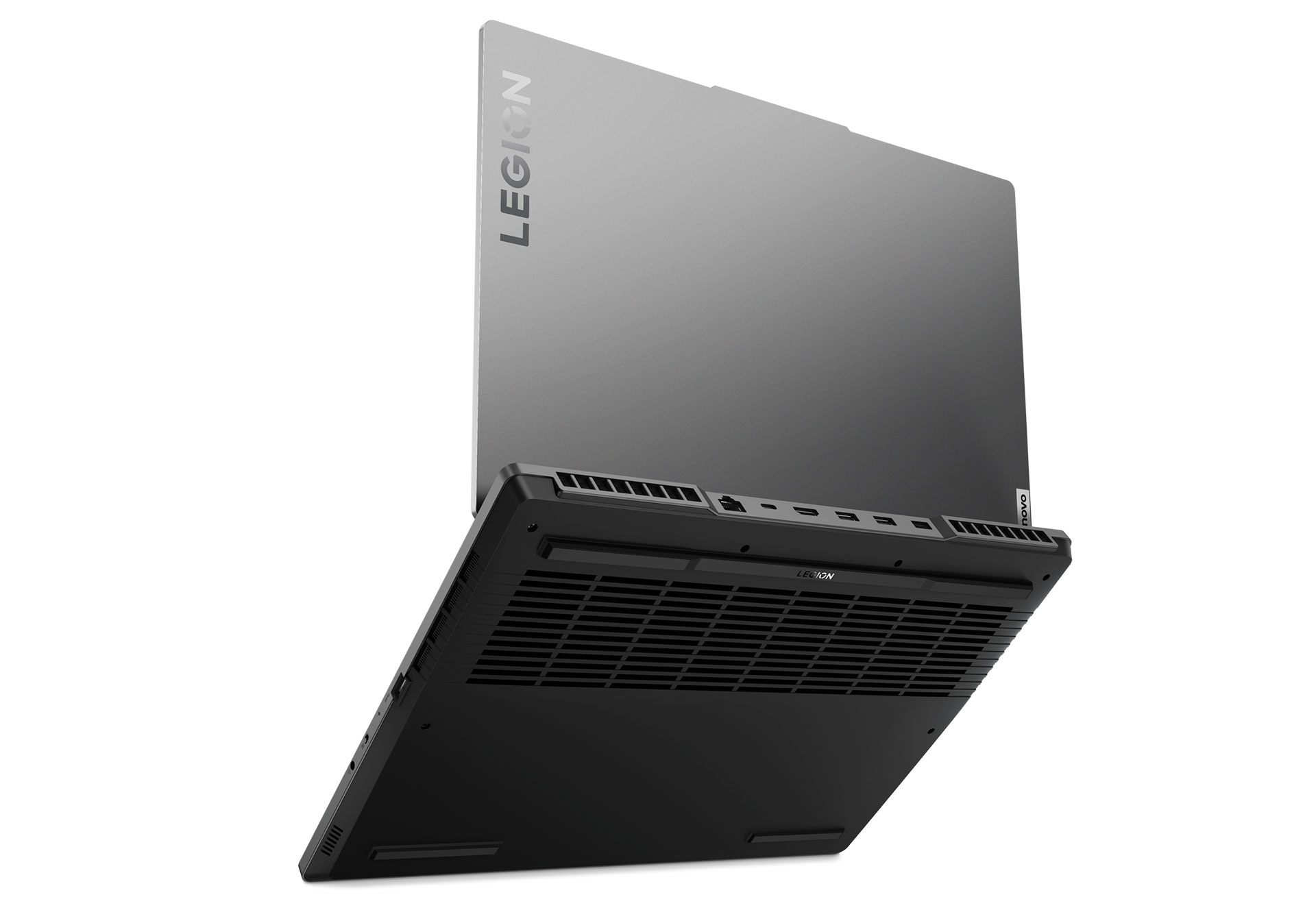 That aside, the Legion 5 series is built on Intel/AMD H-class processors and up to RTX 3070Ti graphics at launch, able to run at up to 140W of power with Dynamic Boost. That’s on par with the previous Legion 5s. A MUX is still implemented, and with the 2022-generation hardware, this series runs on DDR5 memory and PCIe gen4 storage.

You’re still getting 15.6-inch 16:9 screens on the Legion 5 series and not the 16-inch 16:10 options available on the 5 Pros and the 7s. Lenovo also opted for lesser quality panels here, with either FHD 165Hz or QHD 165Hz options, both with only 300-nits of peak-brightness, 100% sRGB color coverage, and no VRR support.

I did catch someone mentioning a FHD camera at the top of the display on the Legion 5s, with a kill switch on the right side, and that would be a welcomed update – looking for confirmation, though. 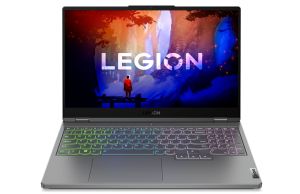 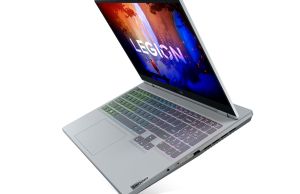 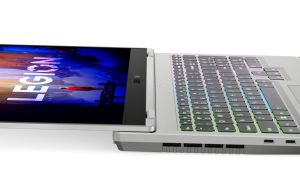 For what is worth, a 17-inch Legion 5 was also available for the 2021 generation, but is no longer mentioned with the 2022 update. Lenovo either ditched the larger version, or it will be updated later in the year. For now, though, only the 15-inch variant benefits from the redesign.

Lenovo also mentions what looks like a larger clickpad and an updated keyboard for this lineup. The keyboard’s layout is pretty much the same as before, but the actuations are a little shallower at 1.5 mm of travel depth and quieter than before, and the illumination offers 4-zone RGB control on most configurations.

The IO has been updated as well and now is identical to what Lenovo offers on the Legion 5 Pro series, including support for USB-C charging at up to 135W and Thunderbolt 4 on the Intel model, plus WiFi 6E and Bluetooth 5.2 connectivity on the top configurations.

The battery situation is a little unclear at this point, though, as it seems like all the Intel models ship with an 80 Wh battery, while on the AMD models you’ll get an option of either 60 or 80 Wh, depending on the other specs.

No word on whether the audio system has been updated or not, either; 2x 2W speakers are still mentioned, like in the previous generation, so I wouldn’t expect much better quality.

All in all, I have great expectations from this 2022 Legion 5 update. With the more premium and compact construction, the updated specs, and quieter thermal module, plus the revamped inputs, screens, and IO, this is going to be a very tough competitor in its niche. I do expect a price bump compared to the previous generations though, with all these updates, and that might weigh in favor of some of the cheaper alternatives like the updated Acer Nitro 5s (2022 Nitro review) or Asus TUF Gaming (2022 TUF Gaming A15 review) series.

From what we know right now, the Intel-based 2022 Legion 5i series is expected in stores around February, starting at $1200+ for most likely a Core i5 + 3050Ti configuration. The AMD-based Legion 5 will be available later in the year, around April, from $1100+.

Update: Our review of the Intel-based Lenovo Legion 5i Pro is available here for the RTX 3060 configurations, or here for the highest-tier RTX 3070Ti model. We’ll follow up with other reviews in the near future.