Razer are updating their entire series of Blade 14, Blade 15, and Blade 17 notebooks for early-2022.

The major changes are happening at the internal hardware level, where the specs are bumped to the latest CPU/GPU platforms from Intel, AMD, and Nvidia, as well as DDR5 memory, PCIe gen4 storage, and WiFi 6E connectivity.

But Razer are also refining a couple of other aspects. Among them, all the available sizes get a refreshed keyboard with slightly larger keycaps and hopefully improved feedback, a FHD webcam with an f/2.0 lens on top of the main display, a refined hinge design, additional cuts for ventilation, and an updated anodized coating that should be less prone to smudges than on the previous generations.

There are also a couple of other individual updates for each model, and especially on the Blade 17 2022, that’s now available with a bigger battery, much-improved audio with 8x speakers, and most likely a complete interval overhaul.

Update: Our detailed review of the Blade 15 is available here. We’ll update once we get to test the other sizes.

Here’s a specs sheet of all the 2022 Blades, and we’ll get further in-depth down below.

As the most recent addition to the Blade lineup, the compact 2022  Blade 14 is mostly a hardware bump from the previous generation.

All the configurations are now powered by an AMD Ryzen 9 6900HX processor, the latest available from AMD as of early 2022, and built on the refined Zen3+ architecture. It’s still 8C/16T, with slight IPC improvements over the previous generations, but with support for DDR5 memory, PCIe gen4 storage, and an updated iGPU, based on an RDNA2 design.

Such a pity Razer is still capping the RAM at 16 GB and are not offering 32+ GB options as well, especially when the memory is onboard and cannot be upgraded – I hoped this would have changed with the update. There’s also a single M.2 storage slot inside this 14-inch model, and not two as on the 15/17-inch Blades.

On the GPU side, the options are an RTX 3060 or an RTX 3070Ti, the latter working at up to 100W. No 3080 anymore. As a novelty for the 2022 generation, though, a MUX seems to be available on all variants; I don’t remember it being included on the 2021 Blade 14. Corroborated with the updated hardware, this should lead to significant gains in performance in games and certain GPU-heavy workloads.

Other than that, the generic updates mentioned earlier will make their way onto the Blade 14, including the refreshed keyboard, the smudge-resistant coating, and the brighter FHD camera. 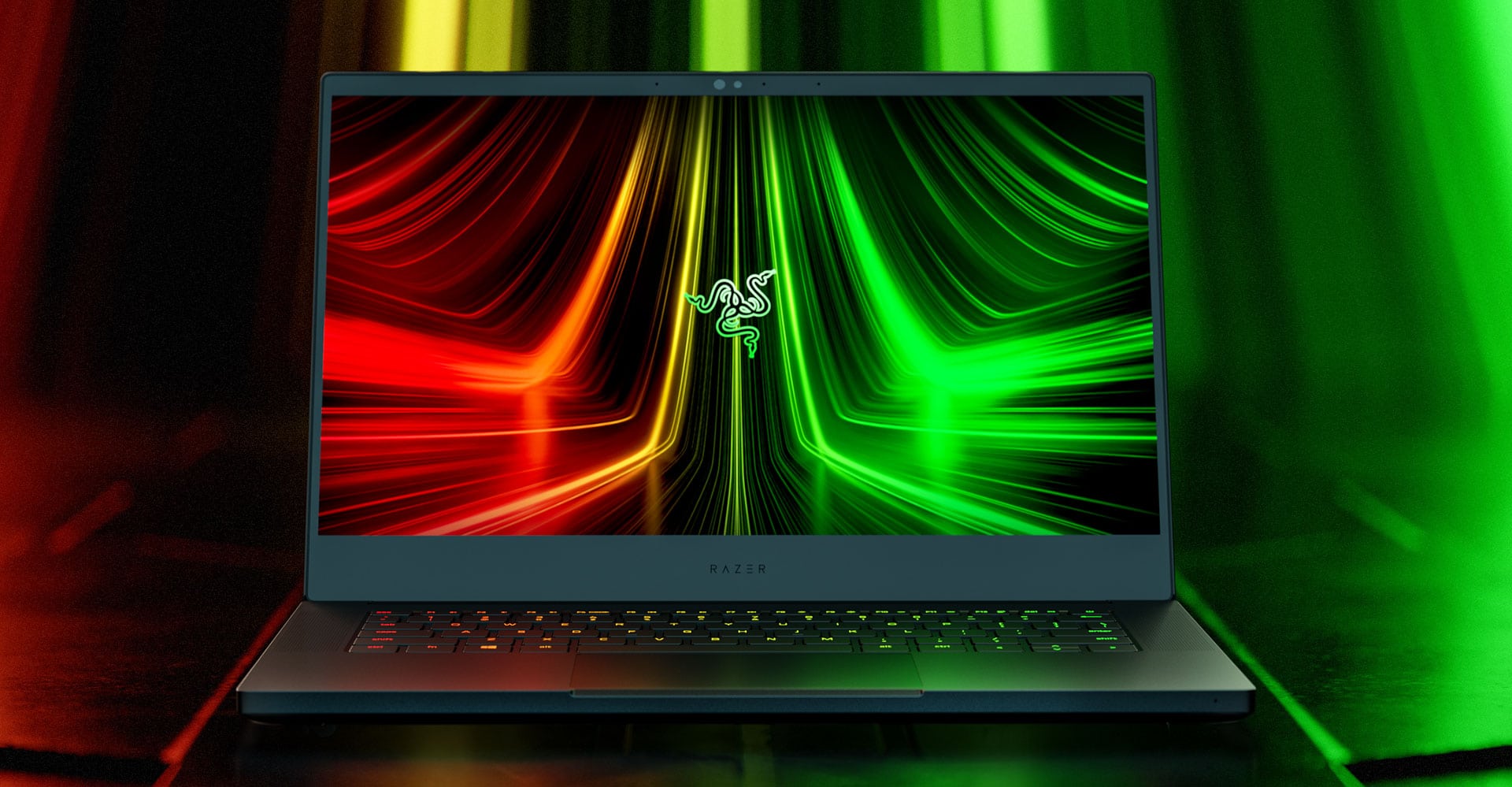 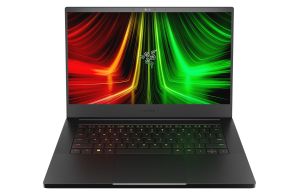 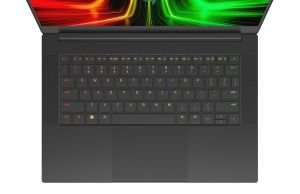 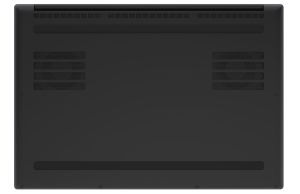 I’m especially interested in that updated keyboard, Razer only mentions that they’ve increased the size of the keycaps, but I’d like to know how/if the overall feedback has evolved. Truth is, Razer haven’t majorly updated their keyboards in the last years, while the competition has. Their large glass-clickpads, on the other hand, are still among the best you can get in the Windows space.

Stay close for more of our feedback in the reviews, Derek’s our Razer expert and will most likely get his hands on some of these 2022 Blades in the near future.

With the updated Blade 15, Razer seems to no longer offer a Base and an Advanced variation, as all configurations are now available with the larger 80 Wh battery and the slimmer chassis previously available on the Advanced. 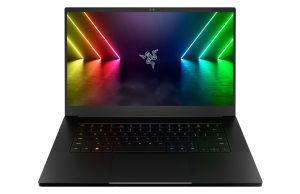 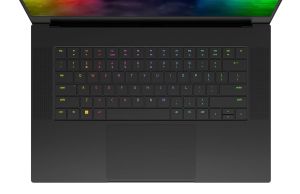 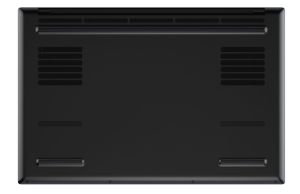 This aside, the Blade 15 is mostly an internal hardware refresh, now built on the hybrid Intel Alder Lake platforms with the Performance and Efficiency cores. A Core i7-12800H processor is available with most configurations, with an i9-12900H on the highest-tier specs with the 4K screen and the 3080Ti dGPU. No worries though, the i9 and the i7 are very much similar CPUs with a 6C+8c/20T design, and just slightly higher Clocks possible on the i9, but which will hardly make a significant difference even with demanding loads in this sort of thinner and somewhat power-limited designs.

The Alder Lake hardware is paired with DDR5 memory and PCIe gen4 storage, with dual RAM and dual SSD slots inside that you can use for upgrades. As far as I remember, the M.2 SSD slots are stacked on top of each other, and that’s why only single-side NVMe sticks will work in this design, and these are only available at up to 1 TB capacities at this point.

On the GPU side, the Blade 15 2022 is also available with RTX 3060, 3070Ti, and 3080Ti configurations running at up to 105 W, with a MUX and optional Advanced Optimus and GSync support on the QHD 240Hz screen options. FHD 360Hz panels and a 4K option are also available on select configurations, but without A-Optimus. I’m not entirely sure if these options get a regular MUX or just regular Optimus, I’ll have to further look into this.

Speaking of the screens, I would have liked to see a Blade 16 update at this point with a 16-inch 16:10 display and smaller bezels in the same 15-inch chassis. It’s not happening yet, but I’m keeping my fingers crossed for one later in the year. That awesome QHD+ 100% DCI-P3 panel available in the Zephyrus M16 would sure be an excellent option on a Blade 16.

Update: Our detailed review of the Blade 15 is available here. We’ll update once we get to test the other sizes.

The Blade 17 is the more consistent update in this early-2022 generation as far as I can tell, although Razer did not offer many specific details about some of the changes that I assume happened internally, alongside the other refinements already mentioned that affect the entire 2022 lineup such as the new fingerprint-resistant coating, the updated keyboard, etc.

What we do know is that while the laptop retains its compact format for a 17-incher, there’s now a higher-capacity battery inside (82 Wh, up from the 70 Wh in the 2021 Blade 17) and an updated audio system, with 8x speakers, unlike the 2x speaker system available before.

To my years, that sounds like an internal redesign of the lower third of the laptop using some space for the extra battery cells and speakers. I would have assumed Razer dropped the extra two small fans placed under the trackpad for these changes, but the image down below suggests those are still there, so I’m curious how they pulled things off internally. I don’t expect the vapor chamber cooling and the overall motherboard design to have changed significantly, but I might be wrong about it, so look for updates once we know more. 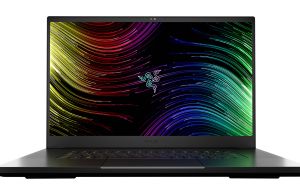 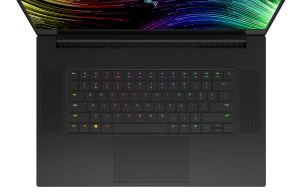 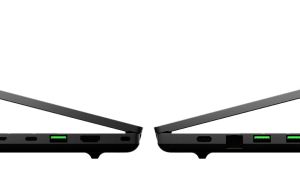 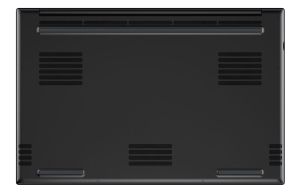 Razer also mention “advancements in power delivery” for the 2022 Blade 17, and I’m not yet sure what this actually means. They might have bumped the GPU power a little bit, although probably not by much considering there’s still the same 280W charger included with this generation. For the 2021 model, the 3070/3080 dGPUs could run at up to 130W with Dyn Boost, which is not bad for a slim design and competitive against other portable 17-inchers such as the MSI Stealth or the Asus Zephyrus S17.

With this generation, the graphics have been updated the 3070Tis and 3080Tis on the higher end configurations, once more with a MUX and GSync on the QHD 240Hz screen options- this only seems to be available with the 3070Ti, though.

The rest of the hardware is identical to what’s now available with the Blade 15 2022, with Intel Alder Lake Core i7-12800H/i9-12900H hybrid processors, up to 64 GB of DDR5-4800 memory, and dual PCIe gen4 storage slots. Since the M.2 SSDs slots are separated on this larger chassis, dual-sided sticks can also be used, allowing for up to 4 TB of storage as per the official specs. WiFi 6E also made it into this update, as well as Thunderbolt 4 and 2.5 Gigabit LAN, the latter not available with the smaller sizes.

That’s about it for this brief preview, but stay around for our detailed reviews in the weeks and months to come, and let me know what you think about these 2022 Razer Blade updates.

Disclaimer: Our content is reader-supported. If you buy through some of the links on our site, we may earn a commission. Learn more.
Andrei Girbea, Editor-in-Chief. I've been covering mobile computers since the 2000s and you'll mostly find reviews and thorough guides written by me here on the site.
← Previous Story Razer Book 13 review (16:10 FHD/UHD touch screens)
Next Story → 4K 120Hz and 144Hz laptops – the complete list – gaming & creator options