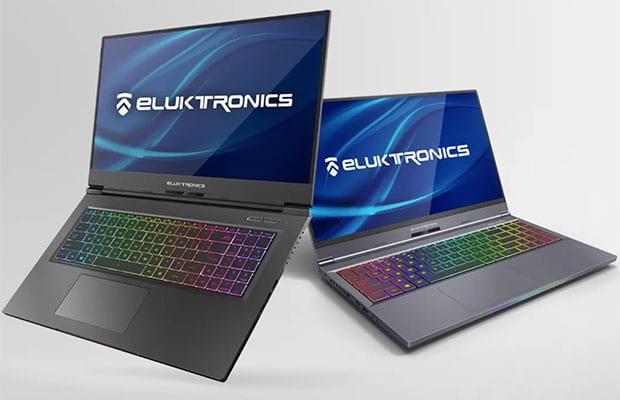 We haven’t covered Eluktronics gaming notebooks here on the site in the past, but their recent MAX-15 and MAX-17 updates are definitely worthy of our attention.

Eluktronics make enthusiast gaming units based on barebone designs, the kind that Maingear, Sager, or Schenker have also been doing for years. They’re available in the United States and are mostly utilitarian products with a focus on performance and excellent value for your money, and not as much on exquisite design and fancy features that you might get with A-brand products from Razer, Asus or MSI.

Nonetheless, their existing Mag 15 (Intel barebone) and Mech 15/17 (Tongfang barebone) lineups are very well-balanced products and score excellently with their audience. They had a rougher start, but follow-up software updates fixed most of the issues and have put them on the map for many looking for a good value performance and gaming computer in the second part of 2019.

That brings us to these early 2020 updates, the Eluktronics MAX-15 (with 15-inch screen and chassis) and its larger 17-inch MAX-17 kin. Eluktronics markets them as the lightest gaming options with full-power specs, starting at 3.8 lbs for the 15-inch model and 4.7 lbs for the 17-inch variant. They’re also compact and don’t compromise on the build quality, as they’re made from the same magnesium alloys used on the 2019 models, but with a redesigned chassis, so we’ll have to get our hands on them before we draw any conclusions.

However, there are a few aspects you’ll have to compromise on if you opt for one of these over a Mag or Mech model, especially on the 15-inch model, and we’ll explain these aspects down below. But first, here’s a quick specs sheet of the two.

Design-wise, the MAX series is basic (even boring by some standards), much like the previous Eluktronics lines. It’s also discrete, with a dark-silver color scheme and a subtly-branded lid that won’t draw attention at school or in meeting rooms. There is an RGB light-bar implement on the front-lip, but can’t be turned off from the software.

The MAX units are also lightweight and portable. The 15-inch model starts at around 3.8 lbs and is both lighter and smaller than the Asus Zephyrus M or the MSI GS65 Stealth. It’s slightly thicker, but that allows room for the IO on the sides and on the back edge, with pretty much everything you’ll need except for Thunderbolt 3 or a full-size card-reader. These might be deal-breakers for some of you, as they’re available on the only slightly larger and heavier MAG-15, which also gets a larger 94 Wh battery, while the MAX-15 only squeezes in a 62 Wh one. We’ll touch on the two further down.

The 17-inch model, on the other hand, gets Thunderbolt 3 and a larger 91 Wh battery in a 4.7 lbs shell, and I’d reckon that’s going this version will draw a lot of attention, especially since the competition in the 17-inch segment is not as tough as in the smaller niche. There’s no Intel-based MAG-17 and no ASUS ROG Zephyrus with a traditional form-factor, which leaves the MSI GS75 Stealth, Gigabyte Aero 17 and the Razer Blade 17 Pro as the only viable alternatives, but with a significantly higher cost. In-all fairness, Asus does offer the powerful and expensive Zephyrus GX701, but that’s a different design with its own particularities and quirks. 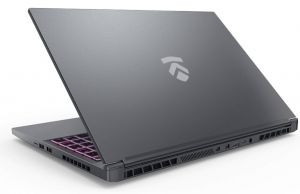 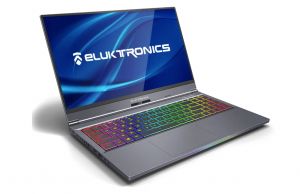 This aside, one more antagonizing feature of the entire MAX lineup is the full-size keyboard with a Numerical section and translucent keys, the kind MSI used to put on their laptops in the past. That means that each key gets transparent edges that allow the RGB lighting to shine through, but this design might not appeal to everyone. You should also wait for reviews on how this keyboard feels and sounds in actual use.

The clickpad is still fairly spacious and glass, with Precision drivers, so it should be pretty good for everyday use. The MAX notebooks also get an IR camera for Hello authentification, but it’s a nose-cam, thus placed underneath the screen on both variants.

Speaking of that, Eluktronics offers the MAX notebooks with FHD IPS 144 Hz panels, so not with the 240 and 300 Hz available on other gaming ultraportables. For what is worth, 144 Hz is still plenty fast for the average gamer, even for shooters and other fast-paced games, but if you’re playing those competitively at a high level, perhaps you should go with a 240/300 Hz option instead. 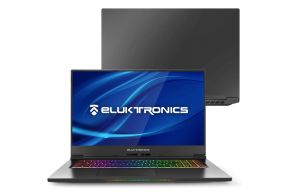 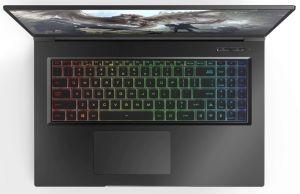 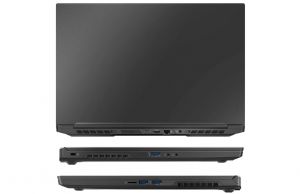 As mentioned earlier, Eluktronics does a good job of optimizing performance in their laptops. They’ve had problems in the past with CPU or GPU throttling in games, particularly with new models, so being an early adopter could be risky. But they fixed them rather quickly with BIOS updates that better tuned the CPU/GPU thermal limits and fan behavior.

Their software offers several power profiles and you can use them to juggle performance, thermals, and fan noise, boosting and sacrificing some over the other based on what you want at a particular time.

Specs-wise, the Eluktronics MAX 15 and 17 are both based on an Intel Core i7-9750H processor, with various amounts of RAM and storage, as well as options for full-power implementations of the RTX 2060 and 2070 chips. There’s also a GTX 1660Ti option for the MAX 17, but not for the smaller models. There’s also no option for an eight-core i9 processor.

It’s sure interesting to see the 115W 2070 in such a small chassis, few other gaming ultraportables go this route, such as the MAG 15 or the Zephyrus S GX502, with thermal and noise limitations. However, the more interesting particularity of Eluktronics laptops is their Eluktroboost technology, which raises TDP allowance for the graphics chips. This way, the RTX 2060 can run at up to 115W as long as within thermal thresholds, offering improved performance than on a regular 2060 laptop. Getting the 2060 to safely run at higher power on the MAX 15 might however require fiddling with undervolting and GPU tweaking, and you’ll find these explained in the article below that goes over the MAG 15 with November 2019 updates.

All in all, it’s early to draw conclusions on how well will these MAX models perform, especially without knowing details on the thermal module and overall design compared to the MAG 15. Thus, you should look for reviews that further dig into how these handle games before getting one. Unfortunately, we’re probably not going to review them since our US presence is limited, but we’ll link to reviews and videos once we find good ones.

There are definitely plenty of good ultraportable gaming laptops out there. Eluktronics, for instance, offer the competitive MAG 15 and even the beefier Mech 15.

With the MAG 15, you’re still getting a portable chassis at around 4.2 lbs, but with Thunderbolt 3 support, a clicky mechanical keyboard, a large 94 Wh battery and a known record of strong points and quirks. On top of these, with the MAG 15 you also get a number of software tweaks that address some of the initial issues, such as performance in demanding loads or improved audio/mic quality.

The same Intel-based design is available as the XMG Fusion 15 in Europe or the Vapor 15 in Australia.

Barebones aside, A-brand 15-inch ultraportables such as the Asus ROG Zephyrus M and Zephyrus S, Acer Predator Triton 500, Gigabyte Aero 15, MSI GS65 Stealth or the Razer Blade 15 are also options to consider. Most of these are more expensive, but they might offer design lines closer to what you’re looking for, extra features such as front speakers, GSync support or certain ports, higher-tier hardware, and better-tuned thermal modules that allow for solid performance with lower temperatures and noise. Support and warranty are also aspects to consider, but Eluktronics or XMG do a great job with their post-sale services as well, from the feedback I’m seeing online.

That being said, I wouldn’t be hasty jumping on the Eluktronics MAX 15 just yet. Yes, it’s lightweight and compact, but so is the MAG 15, which we consider the safer and better value choice, even if slightly more expensive.

The Eluktronics MAX 17, on the other hand, with the bigger battery, Thunderbolt 3, and less competition from A-brand models, that’s going to be a very interesting option for those of you looking for an ultra-light performance laptop with a 17-inch screen. MSI’s GS75 Stealth is perhaps the closest alternative, and a solid product overall as you can find from our detailed review, but also several hundred of dollars more expensive, even in the lower-tier configurations that would match what you can get with the MAX 17.