In this article we’re discussing the 2023 versions of the Lenovo Legion Pro 5 series, both the Legion Pro 5i Intel-based models and Legion Pro 5 AMD-based configurations.

The Legion Pro 5s are Lenovo’s mid-range lineup of performance/gaming laptops, slotting in between the premium-tier Legion Pro 7/7i series and the budget-tier Legion 5/5i models. The Pro 7s have also been updated for the 2023 generations, but the 5s have not, at least for now.

Much like in the past, the 2023 Lenovo Legion Pro 5s are 16-inch laptops built on mid-tier Intel/AMD specs and Nvidia graphics.

For this model year, they can be specced up to an Intel Core i9-13900HX processor on the Intel side and up to an AMD Ryzen 9 7845HX processor on the AMD side, both with up to Nvidia RTX 4070 dGPUs. Furthermore, QHD+ displays, a 4-zone RGB keyboard, and an 80Wh battery are available on both variants.

Down below we’ll touch on the important features of these 2023 Lenovo Legion Pro 5/5i lineups, and compare them to the 2022 Legion 5 Pros and the 2023 Pro 7 models. We’ll also follow up with updates and detailed reviews in the weeks to come.

These laptops are expected in stores around April 2023, starting at just shy of $1500 for both platforms.

While on a first look it seems that Lenovo are trying to minimize the differences between these mid-range Pro 5s and their top-tier Pro 7 models with these 2023 updates, there are still a handful of features that are not available on these Pro 5s and remain exclusive for the 7s. And for good reason, as these 5s are noticeably more affordable computers.

What the two share in common are the overall design lines and particularities, the IO layout, and the screen options.

However, unlike the Pro 7s which are an all-aluminum chassis, these Legion Pro 5s are part metal (lid, main deck) and part plastic (underside panel). There are also no RGB lightbars on these Pro 5s, unlike on the higher-tier models.

Furthermore, Lenovo implements a regular thermal module inside these, and not the more complex vapor chamber cooling solution that’s available with the 7s. All these combined allow the Pro 5s to be lighter by a few hundred grams. The 2023 Pro 7s start at 2.8 kilos, and these Pro 5s start at 2.5 kilos, which can be a significant difference if you plan on lugging around your laptop every day to work or school. Otherwise, the two are about the same footprint and thickness.

Of course, the build quality suffers a little when plastics are involved in the construction, but I wouldn’t be concerned about it. We’ve reviewed multiple Legion 5 Pro models over the years, and they all felt premium and reliable. Plus, the surfaces that you’ll mostly come in contact with are all sturdy metal pieces on these laptops, with only the main internal chassis and the underside being plastic.

As a novelty for this generation, these Legion Pro 5 models are available in either Onyx Grey or Abyss Blue variants. Both are dark colors and will most likely show smudges and fingerprints easily. Both are available with a dark-grey keyboard that matches the overall theme of the Onyx Grey model, which means there’s no color-matched keyboard on the Blue variant. 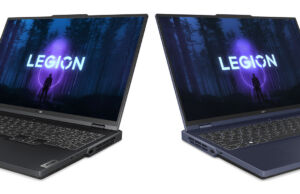 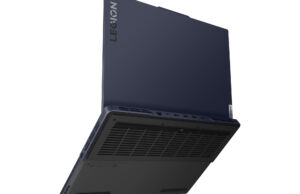 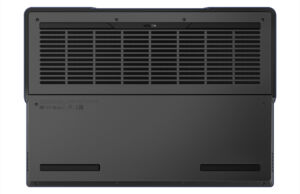 In the past, Lenovo offered the mid-tier Legions in either a lighter grey version with grey keys or a white version with white keys, but these options have been discontinued for the 2023 generation.

Speaking of the inputs, the keyboard and touchpad haven’t changed from the previous Legion 5 Pro generation, with the standard Legion layout that includes a NumPad and properly spaced full-size arrows keys. This is a slightly shallower implementation than on the Legion Pro 7s models, though, with 1.5 mm of key travel, and doesn’t offer per-key RGB lighting. Instead, you’ll get either a white-lit keyboard on some entry-level configurations, or a 4-zone RGB keyboard on most other options.

The specs mention switchable WASD keycaps for this keyboard, a feature that was previously exclusive to the top-tier Legions.

The touchpad is mid-sized and made out of plastic, but handles swipes, gestures, and taps well. As for biometrics, there’s no finger sensor here, but I’m not entirely sure if the camera supports IR or not – it’s probably optional on the configurations with Tobii Horizon technology. 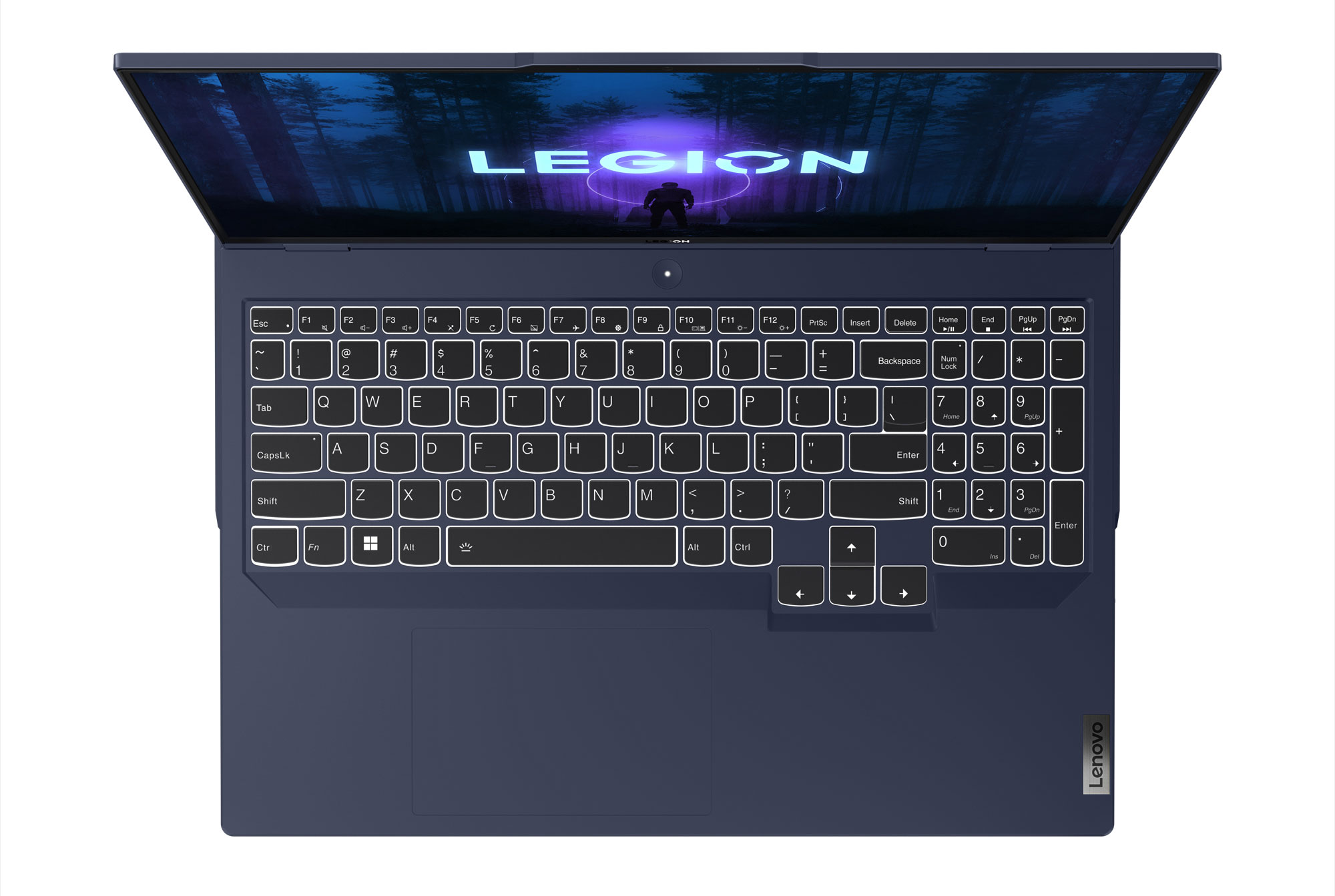 The camera is 2MPx and placed at the top of the display, flanked by microphones.

The entire design of the display ensemble hasn’t changed, with the same smooth dual hinges and the ability to lean black flat to 180 degrees, the same slim bezels all around and the same notch at the top, where the cameras and microphones are placed.

Both are short of impressive by today’s standards, especially with the competition now offering better panels with 100% DCI-P3 color coverage on their mid-tier lineups. Lenovo are lagging behind in this regard, and don’t even offer better panels on their top Legion Pro 7 updates yet. Hopefully, this will change later in the year. 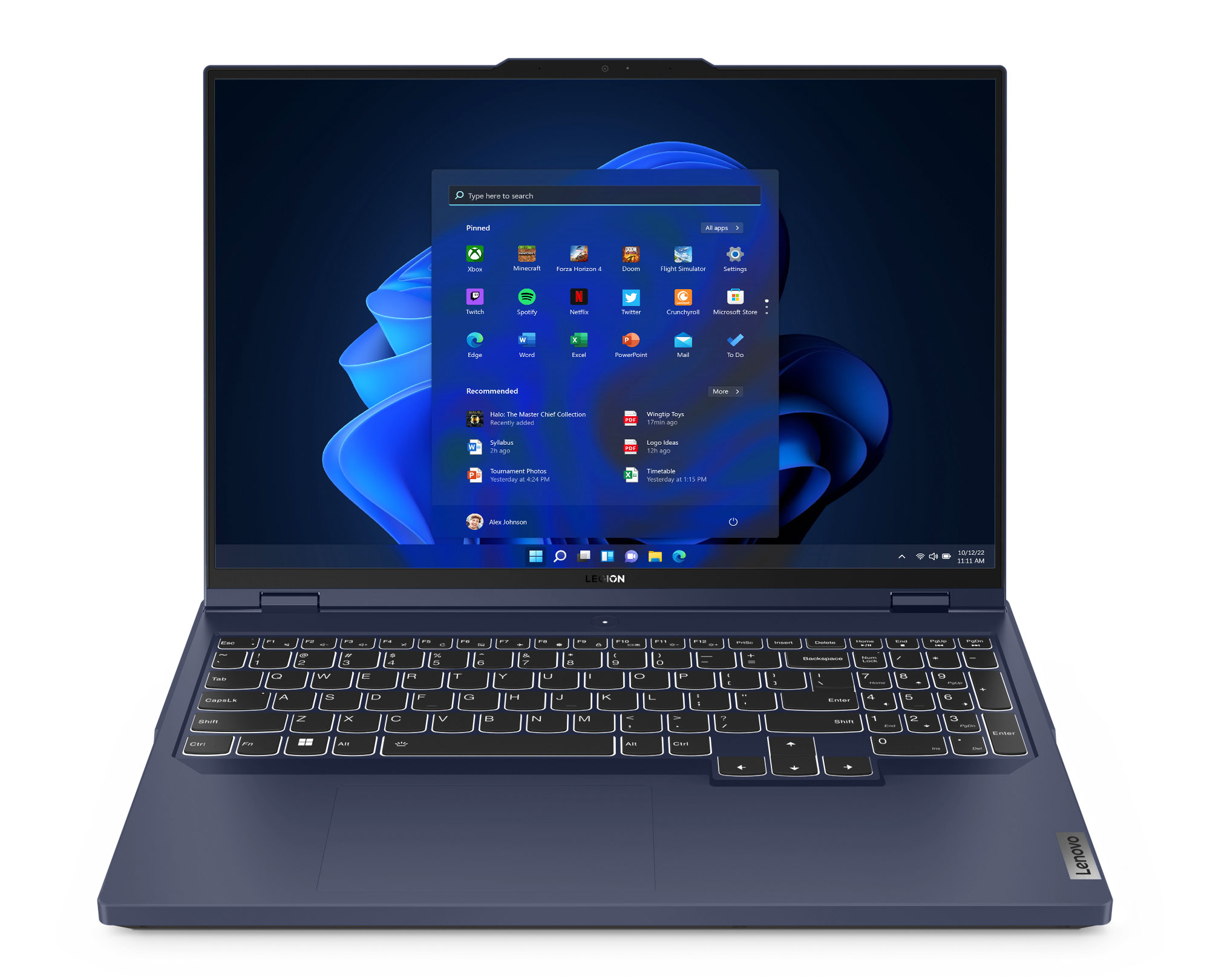 Before we move on I’ll also mention that the IO has been slightly rearranged around the sides, but doesn’t offer anything that wasn’t available before. Most ports are conveniently tucked on the back edge, behind the display, but USB-A ports are available on both the left/right edge. There’s no card reader on these laptops, no Lock, and no Thunderbolt 4 support on the Intel models. Both variants support USB-C charging, though.

These Legion Pro 5 notebooks are available with the latest hardware specs from Intel, AMD, and Nvidia.

For comparison, the 2023 Legion Pro 7s can be specced with more powerful graphics, up to RTX 4090 175W. The two lineups are close in terms of CPU specs on the Intel variant, although I do expect most Pro 5 configurations to be available with the mid-tier Core i5 and Core i7 HX processors. As for the AMD variant, that can be specced up to the 12C/24T Ryzen 9 7845HX, with the 16C/32T Ryzen 9 7945HX remaining exclusive for the Legion Pro 7. Nonetheless, most models will probably be available with the mid-tier Ryzen 57645HX and Ryzen 7 7745HX CPUs anyway.

Aside from these differences in hardware specs, the Legion 5 Pro is also a more basic thermal design than the Pro 7s. Those get the vapor-chamber cooling and support up to 235W of combined sustained power, while these Legion Pro 5 models are a more traditional cooling module with regular heatpipes, and sustained up to 200W of crossload power. The difference is mostly in what can be allocated to the GPU, with up to 175W on the Pro 7s and up to 150W on the Pro 5s.

I don’t have an exact image of the motherboard and cooling module of the 2023 Legion Pros, but I expect it to be similar to the thermal design of the previous generation, illustrated below.

Still, the 2022 Legion 5 Pro was a roughly 185W combined design, and the 2023 models should go up to 200W, so perhaps some aspects have been tweaked as a result. I’ll have an updated image in here as soon as possible. 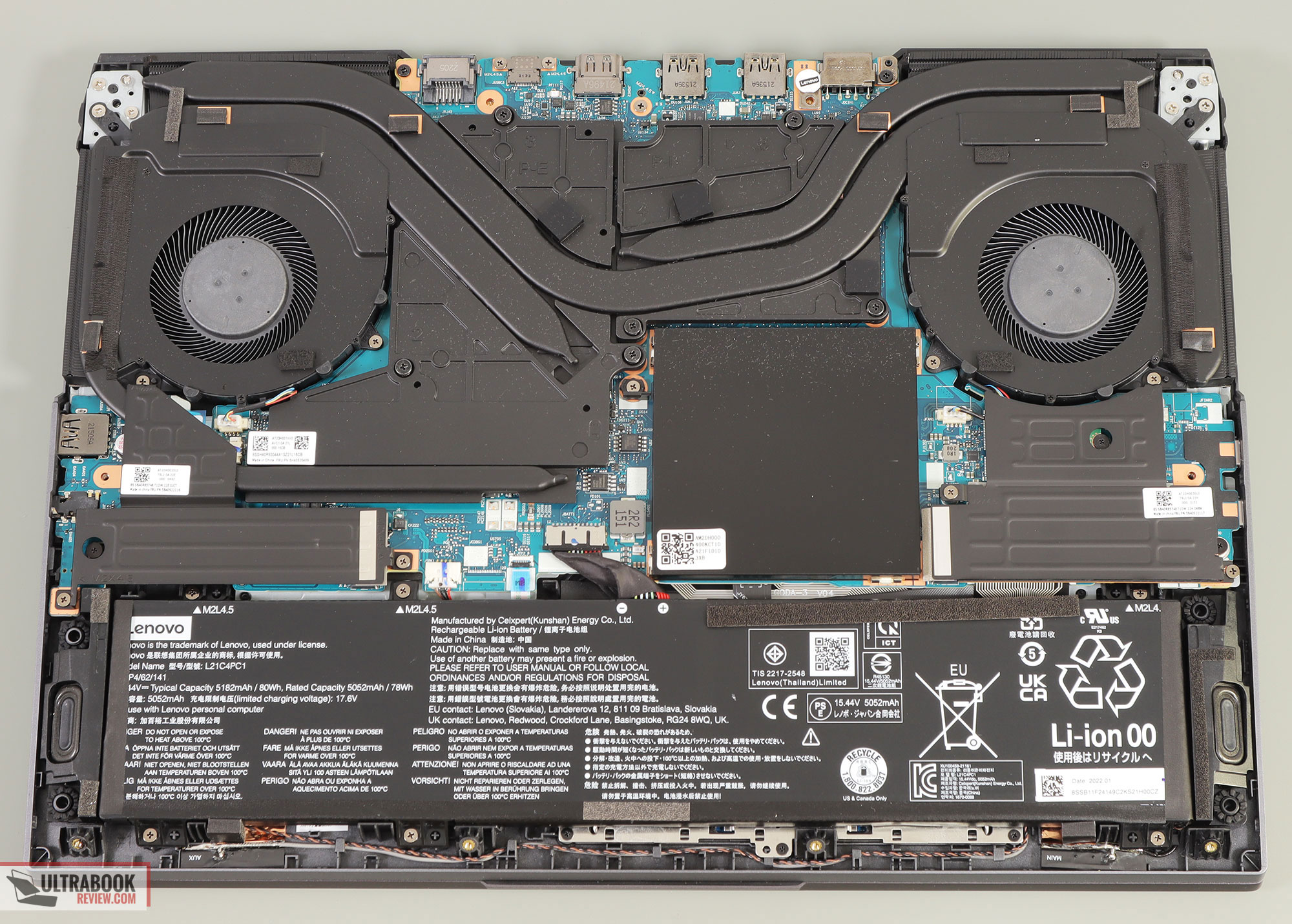 Based on our findings on the previous Legion 5 Pro models reviewed over the years, this sort of thermal module should handle mid-specced configurations well, but might struggle at the higher limit, especially when having the laptop flat on a desk, with the intake fans slightly choked. That means you’ll mostly want to go for mid-specced configurations on these Legion Pro 5s, and opt for the higher-tier and higher-power specs on the Pro 7s if you can spare the extra expense, as those are superior thermal designs.

Nonetheless, I’m eagerly looking forward to reviewing these laptops and sharing my findings with you.

Just like the Pro 7s, these lineups get the same Legion AI chip and machine learning software designed to automatically tune the performance in Vantage. I’m curious if it actually has a noticeable impact on the overall behavior in games and workloads. We’ll see.

The Tobii Horizon technology is also implemented with these laptops, allowing for gearless head tracking in some apps and games. I don’t think this was included with the 5 Pros in the past.

Expect these Lenovo Legion Pro 5 models in stores around April 2023.

Much like with the Legion Pro 7s, I expect these mid-tier Pro 5s to provide a notable boost in performance over the previous generations, both on the CPU and on the GPU side. We’ll have to test the thermal designs before drawing conclusions, though, and I’m not entirely sold on the new dark design language and the fact that Lenovo are still not offering high-gamut panels on these laptops.

Anyway, that’s about it for now, but look for our detailed reviews in the near future. And in the meantime, let me know what you think about these 2023 Lenovo Legion Pro 5 updates in the comments section below.