The AMD Radeon 680M is the much-awaited top-tier RDNA2-based integrated GPU bundled with the majority of the 2022 AMD Ryzen 6000 Rembrandt processors.

In this review article, we’re taking a deep look at this iGPU’s performance in benchmarks, as well as at its overall capabilities in workloads and games. We’re also going to compare it with a couple of other similar-tier GPU solutions, including the Vega-based iGPU in the previous Ryzen 5000 hardware, the Iris Xe iGPU in the Intel 12th gen Alder Lake and 11th gen Tiger Lake platforms, as well as some entry-level Nvidia RTX 3050Ti Max-Q dGPU implementations.

Our results are based on the AMD Ryzen 9 6900HS processor in the Asus ROG Zephyrus G14, where we disabled the dGPU to be able to test the iGPU in all sorts of loads.

It’s important to understand that the G14 hardware implementation provides more than sufficient power and cooling capacity for a Ryzen-only configuration, and is indicative of the maximum performance you can expect from the Radeon 680M iGPU. Implementations without the same thermal design, especially the ultra-portable Ryzen U/H ultraportable formats that will be available this year, might not be able to perform the same way, due to various power/thermal limitations.

That’s why I’ve run some tests at a few different power settings, in order to better understand how the 680M is going to perform in an ultraportable and power-limited implementation.  I also recommend going through detailed reviews for a more in-depth analysis of what each unit can do.

I’ll also mention that there are two AMD Radeon 600M RNDA2-based iGPUs with the current AMD generation, and this article goes over the top-tier Radeon 680M option, bundled with the Ryzen 7 and Ryzen 9 6000 processors. We’ll also follow up on the Radeon 660M bundled with the Ryzen 5 6000 CPUs in a separate article at a later date, once we get to properly test that as well.

I’ve listed the specs sheets for both RDNA2 chips down below, next to the previous-gen Vega 8 chip.

Based on these alone, the 680M seems to be a significant update of the 2021 Vega 8 iGPU, while the 660M is clearly a more budget implementation with less than half of its processing power.

With that in mind, let’s go over some benchmark results first:

When provided with 50+ W of CPU package power, the AMD Radeon 680M iGPU is more or less twice as fast as the previous AMD Vega 8 chip found in the 2021 Ryzen Cezanne hardware.

However, in a power-limited 25W implementation, which is indicative of what we could expect in a potential ultraportable Ryzen design this year, the results drop by 20+%. Of course, the CPU scores will drop as well with the power-limited design, but that’s a topic for a different article.

Compared to the Iris Xe chip in the 12th and 11th gen Intel processors, the Radeon 680M ends up scoring ~50% higher in 3Dmark and Superposition, but trails the Intel iGPU in the Passmark test. The Intel iGPU runs at maximum potential in the M16 design, and at about 95% of its potential in the slightly power-limited ZenBook 14X implementation.

Finally, none of these integrated iGPUs are a proper match for even an entry-level Max-Q dGPU such as the RTX 3050Ti in the XPS 15. The Radeon 680M is roughly 60% of its performance.

Further comparison with the older GTX 1650 MQ chips and the base-level Nvidia MX450 and MX550 chips would make sense here, but we don’t have any recent tests for a proper analysis. I’ll update once we get to test those.

Moving further, let’s dive into some real-life workloads that would utilize the GPU to some amount, such as image/video editing in Adobe Photoshop and Premiere, as well as various other workloads part of the Specviewperf suite of tests.

Photoshop is primarily a single-core CPU-heavy load, so not something you should weigh in heavily in this GPU test. Premiere, on the other hand, utilizes the iGPUs and gives a significant edge to the Iris Xe chip thanks to supporting Intel’s QuickSync technology, so editing videos in Premiere is going to be faster than on a Radeon 680M configuration. I haven’t tested DaVinci Resolve to see how the two platforms fare in that aplication.

For everything else, when supplied with enough power (50+ W), the newer AMD iGPU is 1.6 to 2x the performance of the Vega 8, and 1.3 to 1.5x of the Iris Xe Intel implementation. In a power-limited 25W design, though, the performance drops by 10-20%, but even in this case, the 680M outmatches the full-power Vega 8 and Iris Xe units by a major margin.

Next, let’s look into some games.

Here’s what we got on Medium settings at FHD+ resolution (FHD for the G14, as FHD+ is not an option). I’ve added two RTX 3050Ti MQ configurations, for comparison. The Radeon 680M was tested at max power, and we’ll also touch on the power limited profiles down below.

With most games, the Radeon 680M delivers almost 2x the framerates of the previous Vega 8 chip, both in the Zephyrus G14 chassis. We’re also looking at ~30-50% higher-framerates versus the Iris Xe chip in the Zephyrus M16.

Of course, keep in mind there’s always a potential margin of error to consider here, as these results are measured on devices that are not primarily meant to run on the iGPUs. Thus, better-optimized drivers might provide higher framerates on the iGPU-only configurations.

What I didn’t get to test on this unit is FidelityFX/RSR performance for the Radeon 680M chip. For what is worth, AMD’s materials suggest up to 50% higher framerates with RSR enabled in compatible titles such as Battlefield 5, Doom Eternal, or Cyberpunk.

These aside, here are a couple more games and FHD resolution and Low graphics settings, compared to a handful of other iGPU platforms from AMD and Intel.

The results are all in favor of the Radeon 680M chip, but the gains vary in percentage between the older and the more recent and more demanding titles.

One other aspect that I wanted to clarify is that all these platforms tested above are able to deliver maximum sustained performance on the AMD/Intel iGPUs, with the minimal exception being the lower-powered ZenBook 14X implementation, as in that case the Iris Xe chip only runs at about 95% of its potential. Here are some logs provided as evidence. 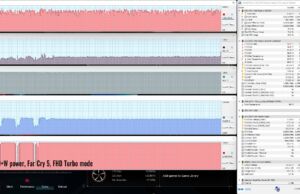 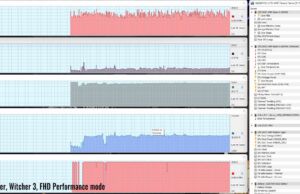 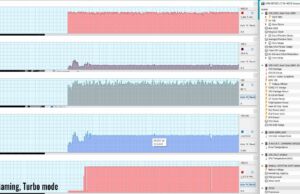 All in all, the RDNA2-based iGPU looks like the most powerful iGPU technology available as of early-2022. That’s going to be especially important for ultraportable thin-and-light devices without any sort of dGPU. However, it’s crucial to understand that those would require a competent thermal module capable of at least 50W of sustained CPU-package power in order to provide the Radeon 680M iGPU with the power required to run at full load, at its maximum frequency of 2.4 GHz, as in our tests.

That’s illustrated in the benchmarks sections above, and I’ve also tested the GPU’s behavior in games at a couple of other power settings. Here’s what we got: 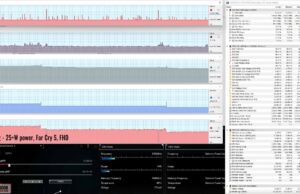 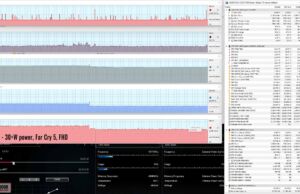 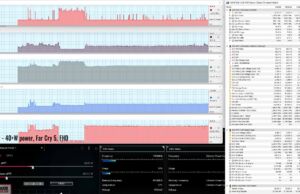 Realistically, most ultraportables won’t go above 30W, and the ultrathin ones might even struggle to deliver 25W sustained. So what I’m saying is that not all of the RDNA2-based Radeon 680M AMD ultraportables will be able to deliver the performance numbers illustrated in this article. In fact, the majority will not.

Of course, what we have here is a Ryzen 9 6900HS implementation, and these findings might differ a bit for the Ryzen 7 6800U ultra-efficiency platforms. However, based on our past experience, I wouldn’t expect major differences, as the Ryzen U and HS are the same architecture and should behave similarly at matching power settings.

Ok, at this point that’s about it for this AMD Radeon 680M iGPU performance analysis. Looking for your feedback down below, as well as questions on anything else that you might be interested in testing.