This is a detailed guide on performance/gaming laptops built with modern AMD Radeon GPUs.

While AMD processors have been a competitive choice on a multitude of modern laptops in recent years, AMD graphics cards have failed to win quality designs in the past.

That, however, is changing with the release of the AMD Radeon RX 6000 Mobile series of GPUs (up to RX 6850M XT laptop series as of 2022), based on the AMD RDNA2 architectures, with powerful compute units, variable-rate shading, RT acceleration, and AMD Infinity Cache. The RX 7000 Mobile series is expected for sometime in 2023, and we’ll keep you updated when we know more.

In all fairness, AMD mobile graphics have not been proper alternatives to the Nvidia mobile options up till now, but with RDNA2 which promises a 50% increase in performance and 40% reduction in power use, AMD laptop GPUs now stand a chance. There are a couple of different GPU sub-series as part of the RX 6000 lineup:

We’ll have a quick look at these chips down below and explain what they’re meant for, and then in the second part of the article, we’ll go through all the available/announced laptops to feature this sort of 2022 AMD graphics.

The majority of these products pair AMD Ryzen processors with Radeon graphics, enabling the AMD Advantage framework of software and hardware technologies meant to amplify your performance and everyday experience, such as SAM – Smart Acces Memory or SmartShift or Radeon Boost/Chill or FreeSync, among others. Of course, you should always look past the marketing and check out detailed reviews in order to decide on the best product for your needs and budget.

Nonetheless, based on our reviews so far, the laptops based on RX 6000 AMD graphics are worth at considering with this generation and have some strong points in certain workflows, but do show their limitations when it comes to thermals and RT performance.

They also have a price advantage over their Nvidia-based piers, and AMD promises there won’t be major compromises with these products, which will benefit from modern designs, good quality screens (144+ Hz, low latency, 300+ nits, and at least 100% sRGB), fast storage and long battery life, alongside the works and gameplay performance you’d expect from a 2022+ gaming device.

Ok, so here’s a quick summary of these Radeon RX 6000 hardware specs.

It’s difficult to properly judge the performance of these chips at this point, especially since the TGPs might vary between the different implementations. We do have some gaming results for you down below, based on the data presented by AMD, and we’ve also reviewed a couple of AMD Advantage laptops on the site, with benchmarks, gaming results, the whole deal. 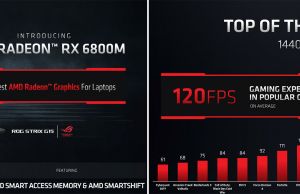 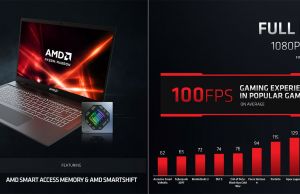 For the most part, though, expect the RX 6850M / 6800M full-size laptops to deliver 60+ fps at QHD resolution with maximum settings in modern AAA titles, and trade blows in performance with high-powered RTX 3070s and 3070Tis. The Radeon RX 6800S, on the other hand, is a lower-power chip meant for ultraportable designs such as the Zephyrus G14, and fares somewhere between a 3060 and a 3070Ti at around 100W of power.

That aside, AMD advertises the 6700M at 100+ fps for QHD gaming with High Settings, and the 6650M/6600M for 60+ fps at FHD resolution and Max Settings. On the mobile space, this detailed article covers the performance differences between the RX 6800S and the 6700S chips, and even compares them to mid-powered RTX 3060/3070Ti implementations.

Nonetheless, take all these with a grain of salt and look into our reviews for a more in-depth analysis of these AMD Radeon laptop graphics platforms.

The remainder of this article lists the complete selection of AMD Advantage laptops built on the top-tier AMD RX Radeon chips, namely the full-power RX 6850M XT and RX 6800M, as well as the efficient RX 6800S/6700S/6600S hardware meant for ultraportable designs. Mid-tier RX 6700M, 6650M, and 6600M are also included here for the time being, but we’re transitioning those to a separate section in the near future.

The list is a work in progress, so if you spot any mistake or something that should be in here and is not, please let us know about it in the comments sections down below.

That’s about it for now on this selection of laptops with AMD Radeon RX graphics cards, but stay tuned for updates, and don’t hesitate to share your thoughts on these in the comments section down below.

Disclaimer: Our content is reader-supported. If you buy through some of the links on our site, we may earn a commission. Learn more.
Andrei Girbea, Editor-in-Chief. I've been covering mobile computers since the 2000s and you'll mostly find reviews and thorough guides written by me here on the site.
← Previous Story Best laptop for school/students in 2022 – portable lightweight options
Next Story → Complete list of Intel Core i9 laptops (12th gen i9-12900HK/i9-12900H) in 2022