AMD were finally able to compete with Intel in the ultrabook space with their 2021 and 2020 Ryzen U hardware iterations, and they’re further pushing the technology with their 2022 Ryzen 6000 Zen3+ updates with higher clocked 8C/16T processors, improved IPC and RDNA2 graphics, the most capable iGPUs of their generation.

The AMD Renoir platform launched in 2020 consists of Ryzen Mobile 4000 APUs that include a Zen 2 processor with up to 8Cores/16Threads and a Radeon Vega integrated GPU with up to 8 Compute Units.

In 2021 AMD launched the updated Ryzen 5000 series of APUs, which, confusingly, consist of two broader types of processors: some based on a marginally revised Zen2+ architecture, as part of the Lucienne Zen2+ platform, and some based on the newer Zen3 architecture, under the Cezanne platform. These are 10-25W base TDP designs, and the performance differs between each implementation based on the allocated TDP and overall design, so you should check out our detailed reviews for a more complete picture of what these AMD Ryzen 5000 U platforms are all about.

As of early-2022, AMD launched their Rembrandt Ryzen 6000 mobile hardware built on the revised Zen3+ architecture and TSMCs 6 nm process node. For now, we’re looking at a Ryzen 7 6800U 8C/16T processor and a Ryzen 5 6600U 6C/12T option in this class. Both run at 15-28W between the different configurations, and include RDNA2 graphics, with 12CUs on the Ryzen 7 and only 6 CUs on the Ryzen 5. Here’s what you can expect in terms of performance from the 12CUs Radeon 680M chip.

Update: More performance details about the Ryzen 7 6800U are also available in our review of the Asus ZenBook S 13, one of the first ultraportables built on the Rembrandt 6000 hardware platform.

Finally, a Ryzen Barcelo 5000 mobile platform is also available, just to make things more confusing. This includes processors such as the Ryzen 7 5825U 8C/16T and the Ryzen 5 5625U 6C/12T, and is a minor revision of the Ryzen Cezanne hardware from 2021, built on the same Zen3 cors and Vega graphics. The only difference is that the Barcelo processors offer +100 MHz CPU clock speeds, and -200 MHz GPU clock speeds. In other words, the Ryzen 7 5825U is 5800U with 10% slower graphics. This platform doesn’t make much sense to me, but is available in some 2022 products.

On top of that, here’s a recent selection of Ryzen U laptops available in your region, and we’ll also get cover the detailed list of all the Ryzen U options available in stores further down in this article.

But first, a quick insight into the 2021 Ryzen U 5000 platform, starting with a summarized specs-sheet of the different APU options and their important particularities.

On top of these, AMD also offer a subseries of Ryzen Pro U processors that will make their way into a handful of business notebooks, which we’ve covered in this separate article.

The Ryzen 7 5800U (8C/16T), Ryzen 5 5600U (6C/12T), and Ryzen 3 5400U (4C/8T) are part on the Cezanne platform and get Zen3-based processors with 4-8 Cores, HyperThreading, an upgraded memory controller and increased amount of L2+L3 cache memory, faster integrated Radeon Vega graphics, and a multitude of other IPC improvements and optimizations.

In comparison, the Ryzen 7 5700U (8C/16T), Ryzen 5 5500U (6C/12T), and Ryzen 3 5300U (4C/8T) are part of the Lucienne platform and get Zen2+ based processors, with only a handful of smaller optimizations over the Renoir Zen2 processors from 2020. The Lucienne architecture is better explained in this detailed article from Anandtech.

Before we move on and talk about some performance differences between these platforms, I’ll also add the specs sheet of the 2020 Renoir Ryzen 4000 lineup, so we can also include them in the comparison.

Moving into Lucienne, AMD ditched the non-hyperthreaded Ryzen 4000 processors, upped the Base and Turbo clocks speeds, updated the memory controller and per-core voltage control, and upgraded the iGPUs. And then, further moving into Cezanne translates in superior overall performance in both single and multi-thread CPUs tests, but also in productivity loads, as well as slight gains in graphics loads.

The numbers below came straight from AMD, so take them with a lump of salt. This first batch pitches all the Ryzen 5000 processors against their Ryzen 4000 counterparts in the Cinebench R20 single and multi-threaded CPU tests. 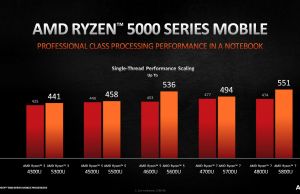 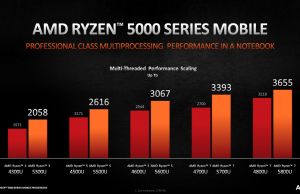 This next pictures shows the GPU performance gains moving from the 4800U to the 5800U, in 3DMark Timespy. 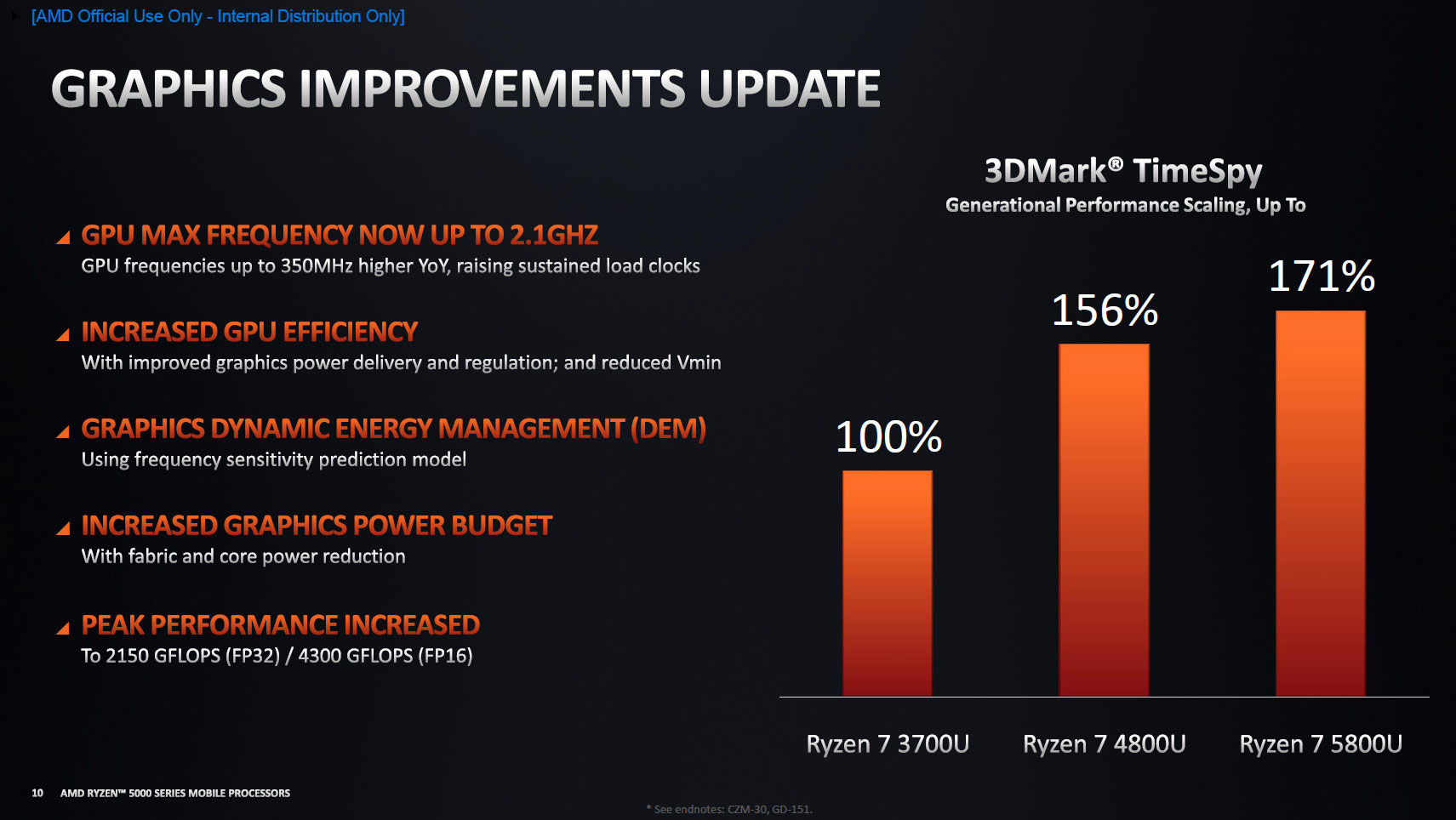 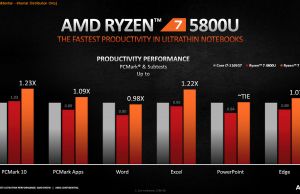 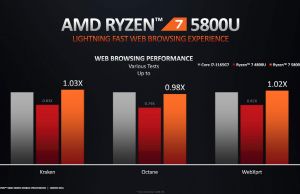 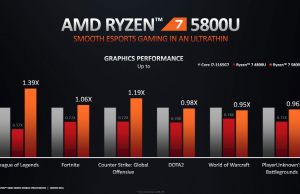 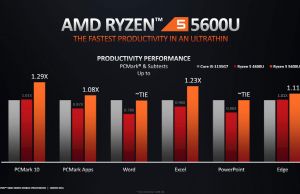 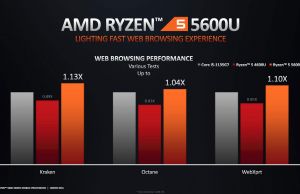 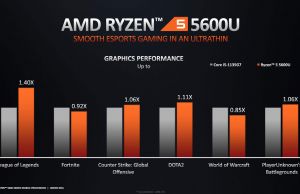 In broad lines, the AMD Ryzen 5000 and Intel Tiger Lake 11th-gen Core platforms are close in daily-productivity and single-core loads, they trade blows in GPU loads and games, and AMD wins across the board in the multi-threaded loads, where it benefits from the increased number of cores over the 4C Tiger Lake processors. The AMD Ryzen 4000 platforms fall a fair bit behind in all tests, but still beat the Intel options in multi-core tasks.

If you’re looking for more insights on the Ryzen platform’s performance in comparison to the Intel options you should check out the multitude of reviews available here on the site, as well as this review of the Ryzen 7 5800U platform inside the ultraportable ZenBook 13 OLED from Asus.

With that in mind, down below we’ve split the list of Ryzen U Mobile laptops into two sections: top tier products based on Ryzen 7 5800U/4800U APUs, and mid and budget-tier devices that can only be configured up to the Ryzen 7 5700U APU, with links towards our reviews and towards up-to-date configurations/prices at the time you’re reading this article. Most of those links are affiliate, so buying through them helps support our work here on Ultrabookreview.com.

Keep in mind that the availability of the top-specced 6800/5800 configurations is limited in most regions, but mid-tier Ryzen 5 6600U/5600U configurations of these laptops should be more widely available. For what is worth, though, you should also check out our article on the AMD Ryzen HS platform if you’re looking for a powerful ultrabook.

That aside, the mentioned MSRP starting prices are usually for the Ryzen 5 or even the Ryzen 3 variants, with the Ryzen 8 models going for significantly more where available.

There are also a handful of business models based on the AMD Pro Mobile platforms (up to the Ryzen 7 Pro 5850U) that are not included in this list. Instead, we’ve covered those in this detailed article on the Ryzen Pro lineup.

Keep in mind that we’re constantly working on updating these lists, yet the information is scarce right now, and some of the info is based on leaks or rumors. Thus, if you spot any errors or any AMD Ryzen U notebook that should be in here and is not, please get in touch in the comments section down below.

Disclaimer: Our content is reader-supported. If you buy through some of the links on our site, we may earn a commission. Learn more.
Andrei Girbea, Editor-in-Chief of Ultrabookreview.com. I've been covering mobile computers since the 2000s and you'll mostly find reviews and thorough guides written by me here on the site.
← Previous Story AMD Ryzen 7 6800H/HS, Ryzen 5 5600H/HS laptops and previous Ryzen 7 5800H – the complete list
Next Story → Best small laptops (11.6 and 10-inch screens) in 2022, with reviews