Dell Alienware m18 and m16 – the most powerful 2023 Alienware laptops

In this article, we’re discussing the 2023 Dell Alienware m18 and Alienware m16 lineups of full-size gaming/performance laptops, the most powerful Alienware notebooks available for the 2023 generation.

Anyway, the form factor allows Alienware to push up to 250W of crossload sustained power through the CPU and GPU in this notebook, as well as implement a complex thermal module with quad-fans, seven heatpipes, and a massive vapor chamber. Throw in the known Alienware build quality and a refreshed design, the RGB full keyboard with CherryMX low-profile switches, a full set of ports, and a 97 Wh battery, and this Alienware m18 could be the best-specced desktop-replacement notebook of 2023.

There is, however, one area where the Alienware m18 seems to come short: screen options. We’ll discuss them further down, where we’ll go over the important features of these two Alienware 2023 models, and then we’ll hopefully follow up with our detailed reviews sometime throughout the year.

Here’s the complete specs sheet of the 2023 Dell Alienware m16 and Alienware m18 models. We’re still filling up the blanks on certain aspects, so stay tuned for updates

Alienware mostly focused on the m18 in their press release, thus so far we only know little about the particularities of the mid-sized Alienware m16 model. As mentioned above, I’ll fill up the blanks and update the article over the next few days, and for now, mostly touch on the m18 model.

As far as looks go, these 2023 models are a result of the revamped design language that Alienware call “Legend 3.0”, with a dark-gray color scheme, a full-metal chassis, and some neat Alien branding elements on the lid and on the inside, in the power button.

Here are some more images of the 18-inch Alienware m18 model. 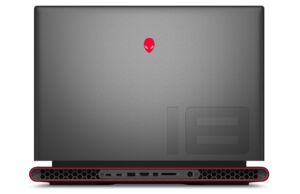 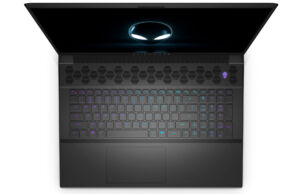 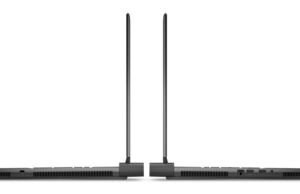 And here are a few more of the mid-sized Alienware m16 variant. 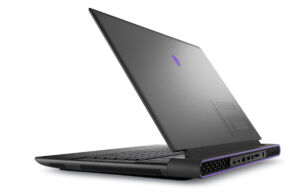 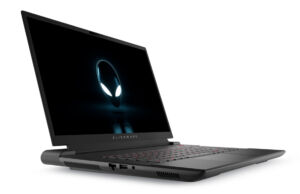 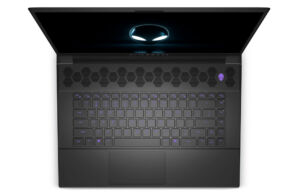 Now, despite the fact that these laptops are massive, they do appear somehow not as bulky as the previous generations with daily use, because of the taller implemented 16:10 displays that translate into somewhat smaller bezels. Also, some of the main body is tucked behind the display, in that hump that incorporates part of the IO and some of the thermal module, so the screen is positioned a little closer to you than you would expect on a device that’s 320 mm deep.

Most of the sides are reserved for vents as well, especially on the right. That’s why the majority of the available ports are tucked on the rear edge, behind the display, where the m18 offers everything you could want on a modern laptop. The m16 ditches some of those connectors, but still offers a good set of ports.

Speaking of the screens, Alienware mention two panel options for the m18:

Neither is quite a proper match for the other specs on this laptop. The QHD option is fine as far as the resolution goes, but still dim at only 300-nits of max brightness, so even if you keep the laptop indoors, the colors and images won’t look as vivid as on other panel options. Plus, watching HDR content is definitely not possible here either. There are no options for 4k+ 120/144Hz panels or any of the miniLED options with dimming zones and 1000+ nits of brightness available with other full-sized notebooks these days.

It’s unclear at this point whether better panels would be offered for the Alienware m16, but I’m hoping at least that one will support a miniLED option at some point later in the year – there’s a fair chance it won’t, though.

As far as inputs go, the Alienware m18 gets a full-size keyboard with a NumPad section and optional CherryMX low-profile switches, similar to the one offered with the previous-gen Alienware m17 models. This is the best mechanical keyboard available on a laptop these days.

Underneath the keyboard, there’s enough space for a spacious glass touchpad on this 18-inch model, but the touchpad on the Alienware m16 is much smaller, and that unit also implements a simplified keyboard without a NumPad. That’s a consequence of the fact that a big part of chassis space in between the keyboard and the display is used for air-intake by the thermal design, leaving for a narrow arm-rest on the 16-inch m16 model, and thus limited space for the touchpad. The previous m15s offered a similarly small touchpad as well. 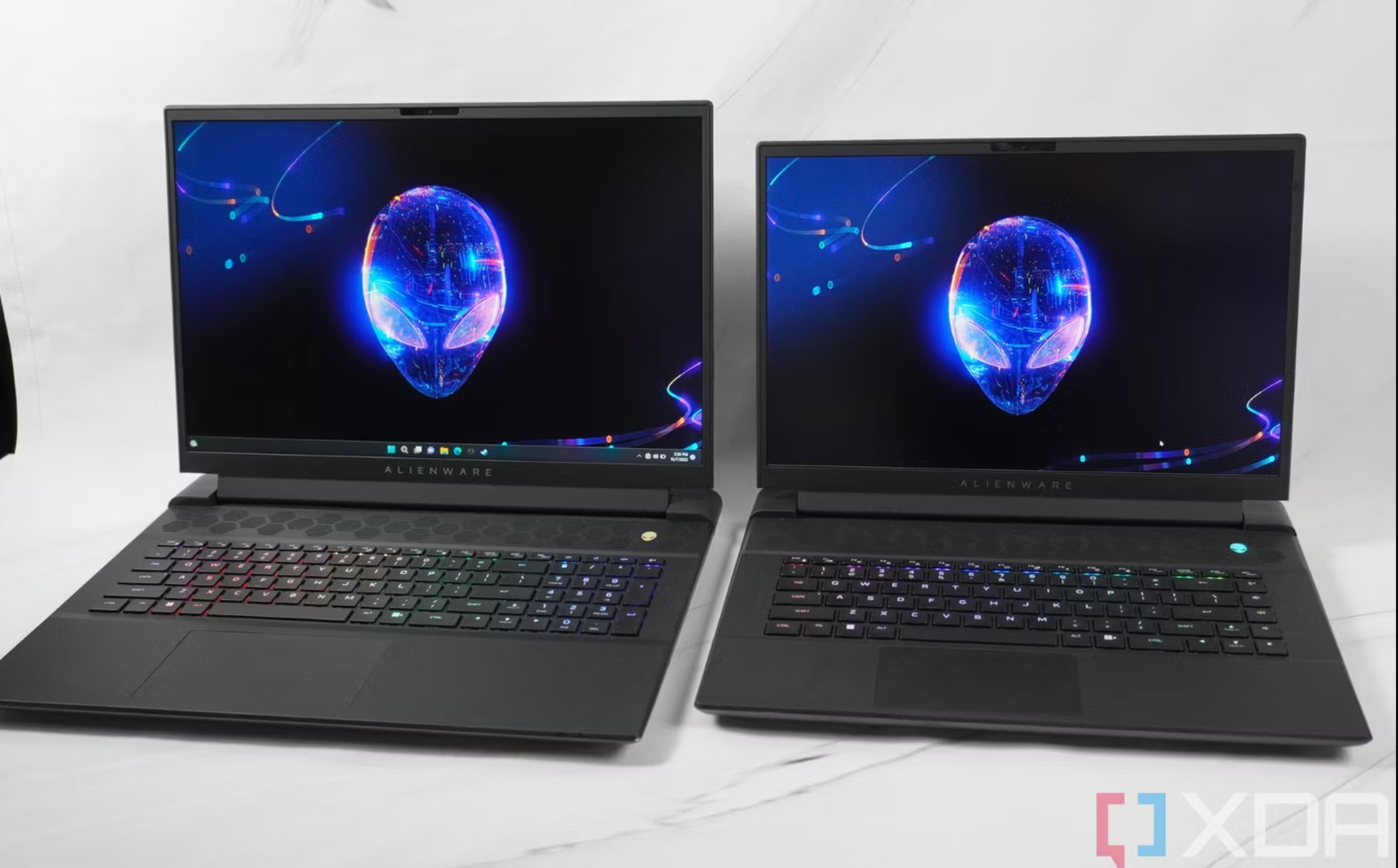 Alienware didn’t go into specific details on the power settings applied to the components here, and only mentioned up to 250W of crossload CPU + GPU power. That should translate into up to 175W TGP on the 4090/4080 models, with the rest going to the CPU, and I’d be surprised to see a higher-power GPU given what we already know from the other brands. Similar settings should be possible on both the m16 and the m18, but with arguably better thermals on the m18, due to its larger chassis.

On the AMD side, these Alienware laptops are some of the very few 2023 models to offer an AMD Advantage platform with both AMD processors and AMD GPUs.

That’s because AMD’s offer cannot compete with Nvidia’s RTX 4000 chips at the higher end, so these AMD Alienware models are rather contenders in the mid-tier segment. In fact, they’re quite unbalanced, as on the CPU side you will be able to specs these with up to the beastly 16Core/32Thread Dragon Range Ryzen 9 7945HX processor, but on the GPU side, there’s only the option for a Radeon 7600M XT 120W chip.

Moving on, Dell mention a thermal module that consists of quad-fans, quad radiators on the back and sides, seven heatpipes, a vapor chamber, and their proprietary Element 31 encapsulated gallium liquid metal thermal compound, which should be able to tame the components in this 18-inch m18 model. The Alienware m16 gets a similar thermal module, just a little shrunk down in order to fit inside the more compact chassis.

It’s unclear at this point whether there will be any difference in cooling design between the Intel and AMD-based models.

The other specs include up to 64 GB of RAM on both sizes, with 2x DIMM slots, 4x SSD slots, and a 97 Wh battery on the m18, but an 86 Wh battery on the m16 – to be confirmed. Furthermore, an up to 330W charger is included with both models, and both support USB-C charging as well, useful when traveling if you didn’t want to bring along the bulky main brick.

We’ll update this section once we get more details on these two Alienware performance laptops and perhaps a peek at the internals. Stay close, and get in touch down below if you spot any mistakes in the article or find out any useful information that we’d want to add here. Thanks!

Mid-specced variants will follow up around Q2, starting at $2099 for the Alienware m18 and $1899 for the m16. That’s not that bad for Alienware laptops, which are notoriously expensive compared to similarly-specced alternatives.

The AMD configurations will be available as well sometime around Q2 2023.

That’s about it for now, but look forward to our future updates and, in the meantime, let me know what you think about these 2023 Alienware M16 and Alienware m18 designs.