Lenovo are updating their lineups of Slim and Yoga thin-and-light ultrabook notebooks for 2022.

Among the novelties, we’re looking at a hardware bump to current Intel Core 12th-gen Alder Lake and AMD Ryzen 6000 Rembrandt hardware platforms with DDR5 memory and PCIe gen4 SSD storage, various display options including wide-gamut and OLED, larger batteries, and a bunch of extra features and traits meant to build up these products into competitive choices versus the alternatives offered by the other OEMs.

We will review most of these computers in the following months, as they become available in stores.

In this article, though, we’re discussing arguably the most interesting launches, the 2022 Slim 7/7i and Slim 7/7i Pro X, all-rounders with competitive specs in portable designs.

If interested, we’re also discussing the even thinner and lighter, but not as powerful, Slim 9 and Slim 7 Carbon updates in this separate article.

First off, the Slim 7/7i Pro X series is a new addition to Lenovo’s lineup this year, as 14.5-inch portable designs built on Core H/Ryzen H hardware and mid-range Nvidia dGPUs, alongside high-gamut and high-refresh 16:10 displays, good inputs and connectivity, and fairly-sized batteries.

To make things more complicated than they should be, these are branded as Lenovo Slim 7/7i Pro X on the US market, and Lenovo Yoga Slim 7/7i Pro X in Europe and a few other regions. Way to go, Lenovo!

Nonetheless, you should expect these to be versatile all-purpose computers, slightly more powerful upgrades of the regular Slim 7/7i series (which we’re also discussing further down), and the past Yoga Slim 7 Pro model reviewed here.

Here’s a specs sheet of the Slim 7 Pro X (AMD-based) and Slim 7i Pro X (Intel-based), and down below we’ll get in-depth on the important aspects to consider.

The AMD and the Intel models are identical in most ways, with some small but potentially important differences. Among them, there are the color choices available which each side, but mostly the differences in the IO, where the Intel configurations get two Thunderbolt 4 ports and an HDMI port, while the AMD models only get USB-C gen2 10G ports (with video and charging support), but also replace the HDMI connector on the left side with an extra USB-A. The USB-C part is no surprise, and we might even get USB4 support through a later update once AMD and the USB forum figure out their licensing issues, but ditching the HDMI for an extra USB is weird and doesn’t make much sense to me.

As far as the hardware goes, we have already reviewed a handful of Intel 12th gen and AMD Ryzen 6000 platforms so far, and I expect the AMD way to make more sense in this sort of a thinner product. The i7-12700H is a beastly processor when supplied with a lot of power, but that’s not happening in this design, and we’ve seen that the Ryzen HS hardware is actually more competent at around 40-50W. It’s also more battery-efficient, especially with video streaming and light use.

Nonetheless, the Intel hardware will have an edge in burst loads and single-core CPU heavy activities, as well as when it comes to software that supports QuickSync, such as Adobe Premiere. I suggest checking out our reviews of the ROG Flow X13 and ROG Flow Z13 for a more detailed analysis of the two hardware platforms at around 50W of power, which is what I’d also expect from these Lenovo Slim Pro X models.

On the GPU side, Lenovo haven’t provided clear info on the GPUs included here, but I expect Max-Q implementations of the 1650 and 3050Ti chips, at around 35-50W, with a combined system power of up to 65W. They do mention a next-level thermal design, which should hopefully translate into a proper balance of performance, thermals, and noise levels. Based on past experience with these sorts of Lenovo laptops, I wouldn’t expect unpleasant surprises. We’ll know more once we get to review these. 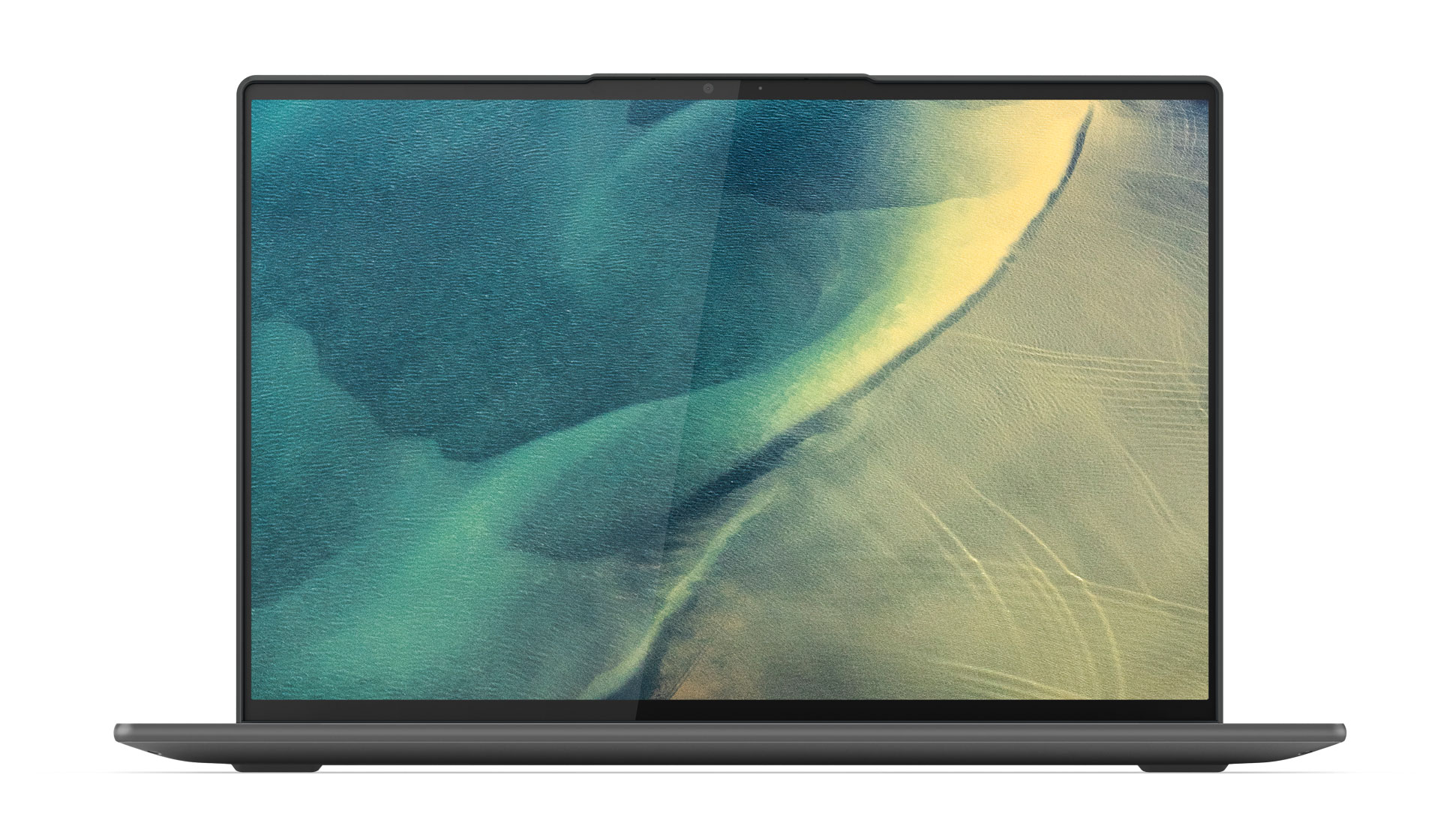 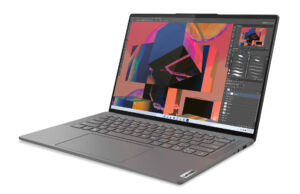 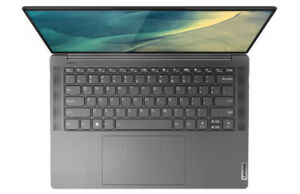 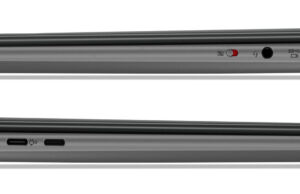 As far as everything else goes, these Slim 7 Pro X models borrow most design lines and characteristics from the previous Slim 7 and Slim 7 Pro generations, with all-metal constructions, a centered keyboard and spacious clickpads, and good screen-to-body ratios, without sacrificing the webcam experience. An FHD webcam is placed at the top of the screen, with IR support for Windows Hello and an eShutter.

Compared to past generations, these 2022 Lenovo Slim 7 Pro X models get an 14.5-inch 16:10 display with a new-generation IPS panel. We’re looking at 3K resolution, 120Hz refresh, wide-gamut color coverage at 100% DCI-P3, and options for either a matte, glossy non-touch, or a glossy touch finishing. All these combined will be a solid differentiator for the Pro X series vs. the competition, especially as most of the alternatives are pushing OLED panels these days, and very few still offer a proper IPS option.

As far as the competition goes, I’m seeing these as solid alternatives for the Acer Swift X and Asus VivoBook Pro 14X lineups, with similar characteristics and specs. At the same time, these Slim Pro X notebooks might even be considered as side-choices for the ROG Zephyrus G14 or Acer Predator Triton 300 SE lineups to some extent – not as powerful in heavy loads and games, but thinner, most likely more affordable, and still a well-balanced mix of work/play/daily-use capabilities.

Lenovo plans to have these Slims Pro X in stores around June 2022, starting at $1499 for the AMD models and $1699 for the Intel versions. The pricing seems to further skew the balance in favor of the AMD configurations. These are MSRP, though, and I’d expect some massive discounts later on in the year.

The regular non-Pro Slim 7/7i series of this year are thinner and lighter alternatives for the units mentioned above. BTW, these are still sold as Yoga Slim 7/7i in Europe, and Slim 7/7i in the US, with the i moniker reserved for the Intel specs, and the non-i for the AMD models.

Furthermore, these are available in either 14 or 16-inch formats, with Intel or AMD hardware, OLED or IPS screens, and with or without dGPUs, but in a much wider range of possible configurations.

The 14-inch models start at 1.3 kilos in weight and are available with either 14-inch OLED or IPS screens with 180-hinges, and 61 Wh batteries. Here’s a full specs sheet of the available options.

And here are some pictures of these 14-inch models. 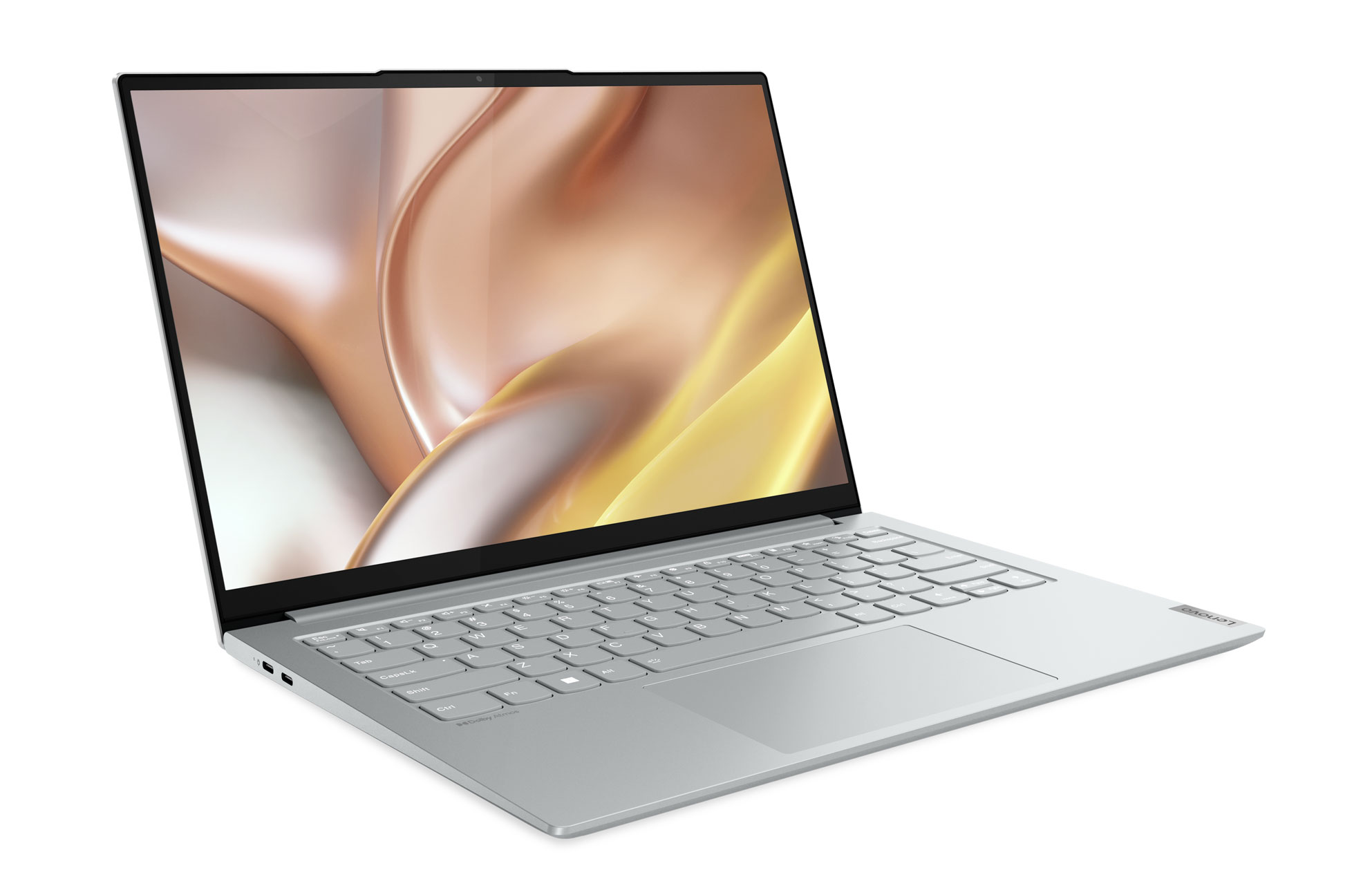 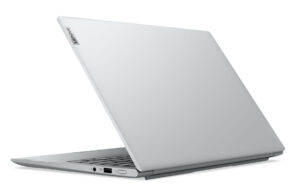 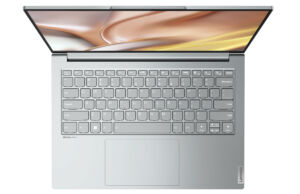 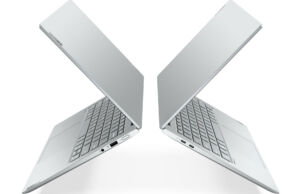 I’m eager to test the performance of those Intel + dGPU options, but I also expect the AMD Ryzen HS models to be excellent daily drivers. This article will help you understand what to expect in terms of performance from those AMD configurations with the Radeon 680M iGPU.

However, as far as I understand, the AMD variants are only going to be available in Europe and Asia, and not in the US. That’s a bummer. The Intel Slim 7i models start at around $1199 MSRP in the US, and are expected in stores in May 2022.

As far as the 16-inch models go, these are larger and heavier, starting at 2.1 kilos in total weight, come with a 16-inch 16:10 display, a wider keyboard with a NumPad Section, more ports, and a 75 Wh battery, as well as a multitude of hardware combos.

Here’s a full specs sheet of the available options.

The 16-inch Slim 7 models are refined iterations of the Slim 5 Pro 16 2021 reviewed over here, with a nicer metallic construction, improved IO, and a redesigned interior in order to accommodate the higher-power hardware and dGPU options. Otherwise, the general design lines, inputs, battery life, and the 2.5K screen are the same, and that review will showcase what to expect from the 2022 generation. 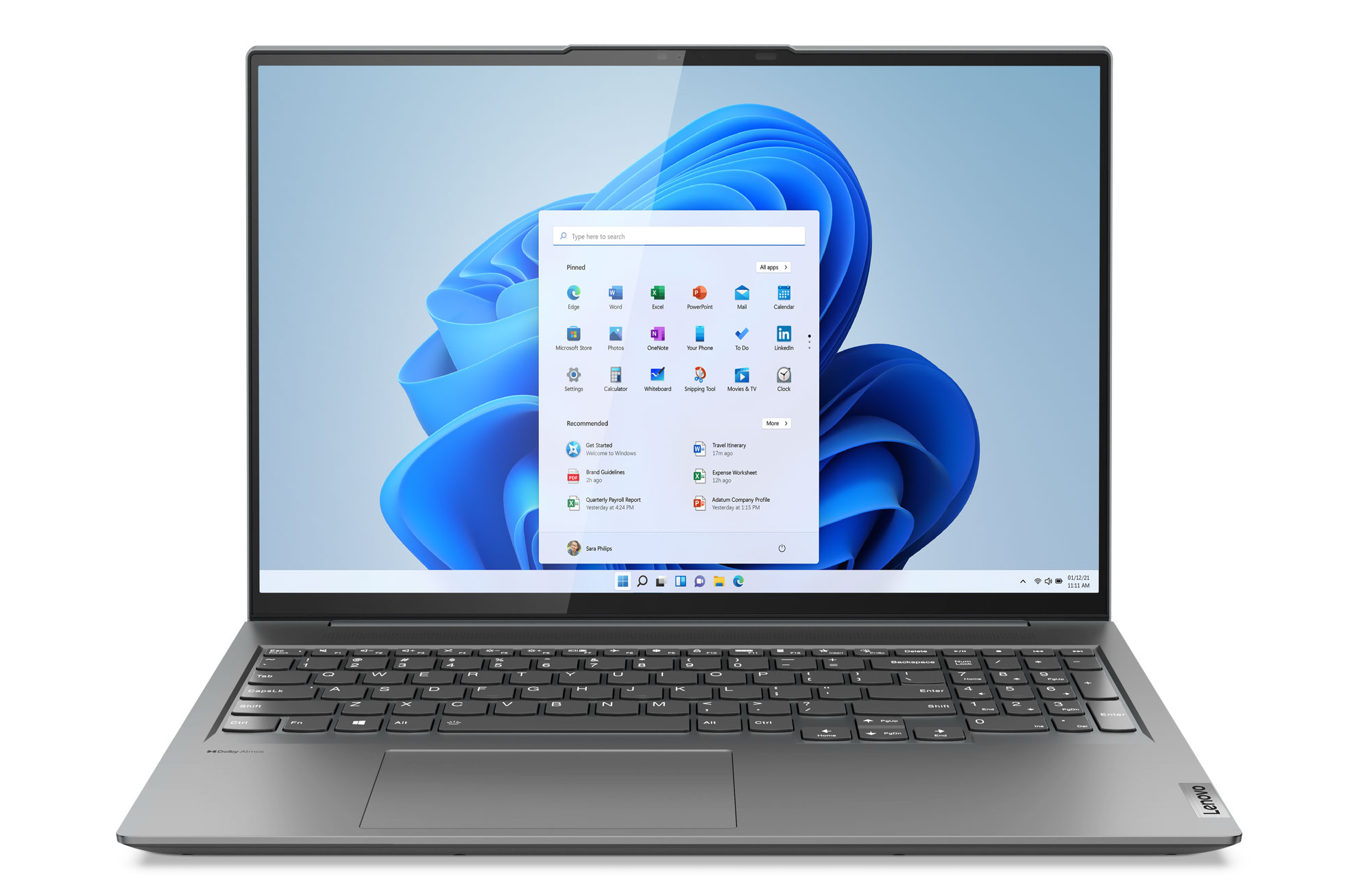 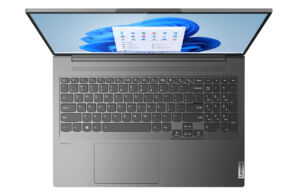 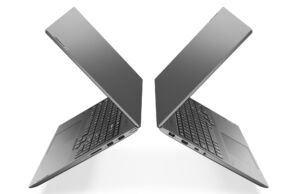 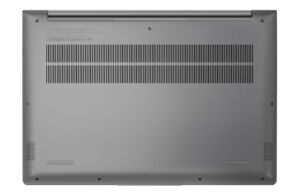 With these 16-inch lineups, I’m curious about the capabilities of the Intel Arc 370M configuration and how it compares to the AMD options in performance. We do know already that AMD will have the efficiency on their side, and I’m looking further to finding out if/how the Arc dGPU can compensate for it.

That’s a wrap for this quick preview of the 2022 Lenovo Yoga Slim 7 lineups. Waiting for your feedback down below, and look for our future reviews for a more in-depth take on these devices.