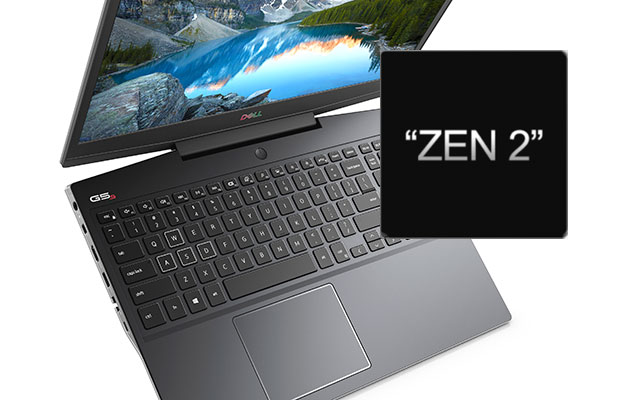 It’s now scheduled to be available in stores around May 2020, though, so plenty of time to test and figure out what these new AMD platforms are all about, how they fare against the previous AMD Ryzen-H 3000 implementations and the available Intel/Nvidia models that have dominated the mid and high-tier gaming notebooks in recent years.

This 2020 Dell G5 15 is not just a hardware update of the existing Dell G5 15 5590 SE from 2019, based on Intel Core H processors and Nvidia GTX/RTX graphics, but actually a complete redesign, both in terms of looks, features, and functionality.

Among the new features, the 2020 G5 15 gets an optional RGB keyboard (4-zone), an upgrade from the blue-lit one on the previous G5, as well as an optional 144 IPS Hz screen with FreeSync support and Nvidia G-Sync compatibility.

I’m not necessarily sold on the new aesthetics. They remind me of the Lenovo Legion Y720 and older Asus ROG laptops, with the mid-hinged display, fairly thick top and bottom bezels, chunky exhausts on the back and all the ports lined on the sides. To me, this is a step back in terms of design and especially functionality from the 2019 G5, which sported boxier lines and most of the IO on the back edge, keeping cables tucked out of the way.

That’s no longer the case here, but at least the important ports are on the right, and Dell didn’t seem to have compromised on any important feature.

I’d reckon the hardware implementation had much to do with this redesign. There’s now a big piece of unused space between the exhausts on the back edge, occupied by the redesigned hinge. Perhaps Dell could no longer route the connections around the thermal module, or maybe they just found this to be the optimal implementation, as the previous G5 did run hot and experienced thermal throttling issues on the higher-tier configurations.

As for that AMD hardware, while still subject to change, Dell plan to offer the 2020 G5 15 SE with up to eight-core 16-thread Ryzen R9 4900H (and R7 4800H and R5 4600H as well) processors, built on the updated 7nm Zen2 architecture and with improved Radeon embedded graphics.

The R7 4800H marginally outperforms the Intel Core i9-9880H in CPU tests such as 3DMark FireStrike/TimeSpy Physics, but I wouldn’t get hasty with conclusions just yet. AMD are strict on benchmarks and have imposed various NDAs for publishing benchmarks results, around the second part of January, as they’re working on improving drivers and software support on their Zen2 notebooks, both the Ryzen-H and Renoir Ryzen-U variants.

Lower tier variants with Ryzen 5 4600H mobile processors will also be available, with various amounts of RAM and storage. Speaking of RAM, Ryzen 4000 offers support for DDR4 3200 MHz memory, a bump from the 2666 MHz supported by 9th gen Intel Core H CPUs and the 2400 Hz limit on the Ryzen 3000 chips.

As for the graphics, early leaks also suggest that the AMD Radeon RX 5600M is nearly a match for Nvidia’s existing RTX 2060 80W implementations. We’ll be able to dive deeper into these AMD platforms past the AMD Keynote on Jan 6th, so stay tuned for our updated articles.

What we can add right now is the fact that the AMD CPU and GPU are supposed to be seamlessly coordinated by AMD’s SmartShift technology, meant to optimize performance and power-use based on your requirements, to provide the snappy experience you’d want, but also efficiently manage power-drain when using the laptop unplugged.

No word on whether the 4000-series AMD hardware will finally add support for undervolting and manual tweaking in AMD Master, with an impact over thermals and performance, something possible on Intel-based systems. Update: It doesn’t.

All in all, the 2020 Dell G5 15 SE is a first glimpse at the AMD platform that could revolutionize the gaming-notebook industry this year, much like the Zen2 processors did for desktop PCs in 2019.

As mentioned, this series is expected in stores around late May 20, with an MSRP starting price of under 1000 USD in the US. That’s competitive and on par with the current base starting price of the Core i5/ GTX 16 Ti Dell G5 5590, for most likely improved performance. Nonetheless, Dell’s base configurations lack many of the goodies you’ll want in a modern gaming laptop, and you’ll have to significantly bump your budget for the high-tier hardware, the RGB keyboard, and the 144Hz screen, among others.

Look forward to our detailed review of the Dell G5 in the months to come, where we’ll take a deeper dive into the performance, thermals, noise-levels and all those other important aspects that you should account for when shopping for a value gaming laptop.