This article is a brief first look at the 2022 ROG Zephyrus G15 and Zephyrus M16 updates.

These two have been some of the most popular Asus laptops in 2021, and excellent options overall in the niche of premium full-size computers with a portable/lightweight format and powerful specs. The G15 came in at the beginning of 2021 and offered an AMD + Nvidia platform and a 16:9 display, while the M16 was added later in the year as an Intel + Nvidia exclusive with a 16:10 display and a few extra tweaks over the G15.

For this article, we had an M16 pre-production sample to go over for a little bit, but no Zephyrus G15 yet, that’s why this is not as in-depth as some of my other first-impression articles. Instead, I’ll go over what has changed between the 2021 and 2022 models, and as in the past, we’ll cover everything that matters about these two in the reviews, somewhere in the next couple of weeks.

Spoiler alert: very little has changed at far as the design, features, and ergonomics go, but plenty as far as the internal specs go, where the 2022 updates should deliver a significant boost in performance, with the update to 2022 AMD Rembrandt/Intel Alder Lake hardware with faster RAM/storage, plus Nvidia RTX Ti graphics options with a MUX design.

Here’s a specs sheet of the two, and down below we’ll touch on some of the important details that you should be aware of when considering these two Zephyrus laptops in 2022.

Asus updated the M16 series, and here are our thoughts on the redesigned ROG Zephyrus M16 GU604 chassis. The GU603 chassis isn’t dead, though, and continues as a new model, the Asus ROG Zephyrus G16 GU603. The G16 is not a follow-up of the G15 lineups, because it’s no longer built on AMD hardware.

As I mentioned, the 2022 updates are 99% identical to the previous generations, and you can read our detailed thoughts and impressions in the previous reviews of the G15 and M16 2021 models.

I do expect slightly improved build quality for both chassis with the 2022s, though, as the honeycomb structural reinforcements that were introduced with the M16 should also make their way in the G15. This would translate in fewer (hopefully none) of those creaky noises when picking up the laptop from the corner, or placing your hands firmer on the armrest.

Everything else should remain unchanged, and that means both are compact and lightweight notebooks at around 2 kilos/4.4 lbs with max RAM and 2x SSDs, the same Ergolift hinge design with the exhausts placed right under the screen, the same punchy audio system, the 180-displays, and the same IO, mostly lined on the left-front edge.

I’m still not a fan of this IO placement or the Ergolift kind of cooling. And I don’t like those bright indicator LEDs placed just under the screen, I find them very annoying when using the laptop in the dark.

There are of course some obvious differences between the two. The G15 is available in either a white version with a white keyboard, or a dark-gray version with a black keyboard, while the M16 is only available in a completely matte black color, with a somewhat softer finishing than on the G15s, but also one far more prone to showing smudges and fingerprints. On the lid, both get these tiny machine-drilled dots with a prismatic light effect. 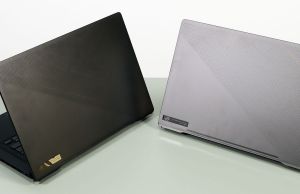 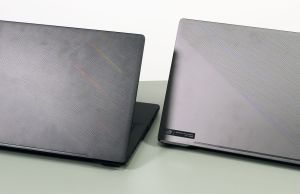 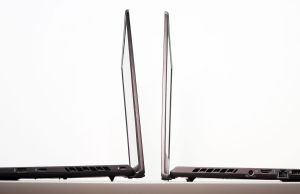 There’s also a much smaller chin under the screen on the M16, as a result of the 16:10 format. However, while it sure looks cool, the extra bezel on the G15 actually improves its practicality with real-life use, by soaking up some of the exhausted heat and allowing the display to run a little cooler than on the M16, as well as not reflecting the status LEDs’ light as noticeably as on the M16. You’ll find these two particularities explained in-depth in the reviews.

One final aspect to mention here is that you’re getting 2x Thunderbolt 4 ports on the Zephyrus M16, but only USB-C 3.2 gen2 on the G15. Both support data, video, and charging, but with the extra capabilities for faster storage, higher-resolution displays, and eGPU compatibility exclusive for the M16.

No complaints here, the keyboards and the clickpads on these laptops are among the best in the segment. There’s also a finger-sensor in the power buttons on both, with Hello support.

If I’m to nitpick, I would mention that per-key RGB control would have been nice on these premium products, as the keyboards only offer single-zone illumination control. You should also consider the potential poorer readability on the white keyboard variant of the G15, due to the limited contrast on those white keys with the illumination activated. 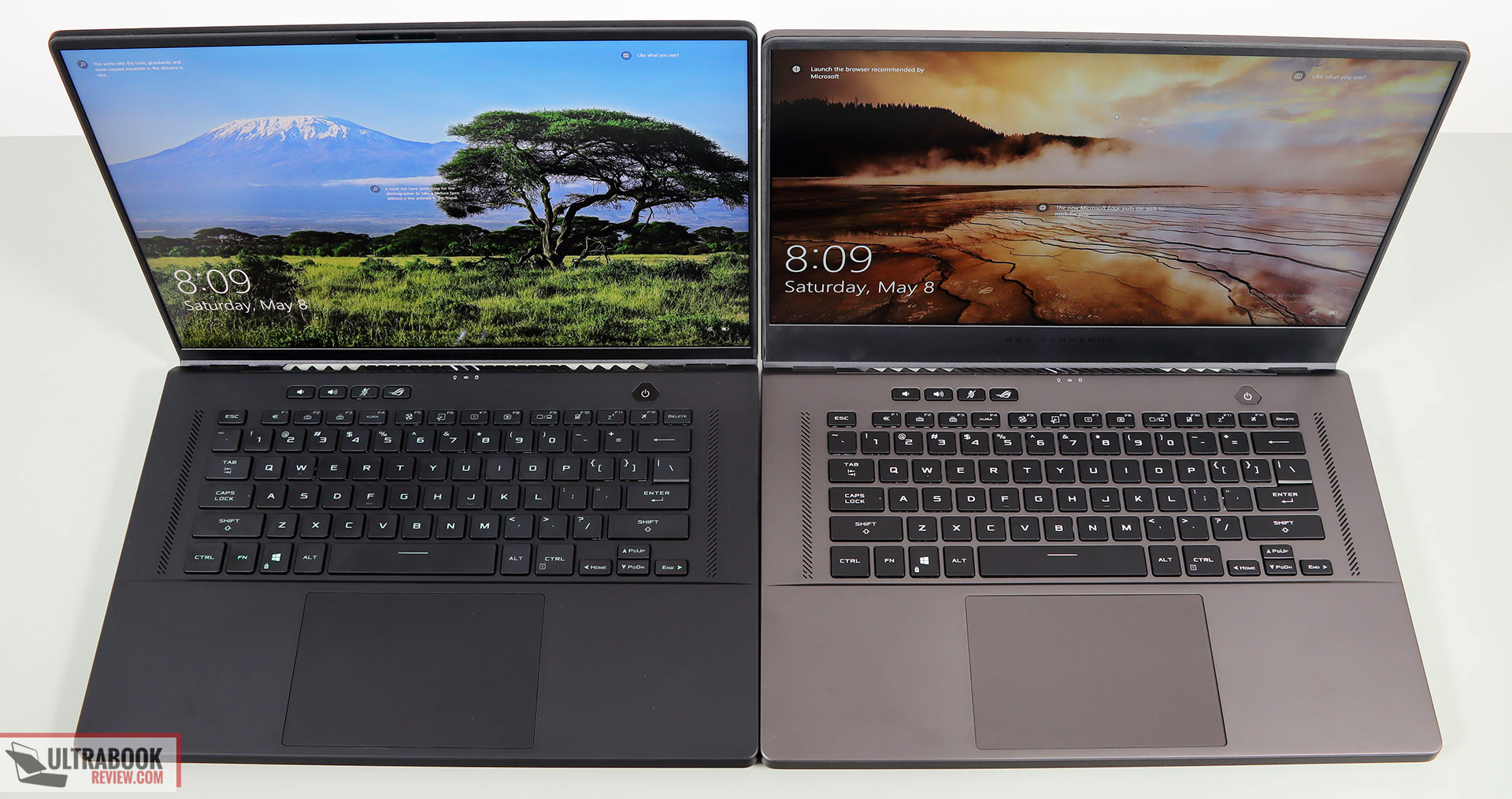 As far as the screens go, the 2022 M16 gets the exact same 16-inch QHD+ panel previously offered with the 2021 model, which is an excellent option for pretty much every use case. It’s bright at 500+ nits, offers good blacks, contrast, and uniformity, vivid colors with 100% DCI-P3 color coverage, as well as excellent gaming abilities, with 165Hz refresh, very fast response times, and Adaptive-Sync support to prevent tearing.

For the G15, Asus have slightly updated the panel from the 2021 generation, and I don’t have the exact specs and test results yet, but I’d expect it to be a close match for the M16’s panel, and overall brighter than the 350-nits panel previously offered. It’s also a 240Hz refresh option now, up from the 165Hz on the M16 and previous G15.

All in all, the displays on these two ROG Zephyrus laptops are among the best-balanced options out there, and the inputs are also among the best in the niche. PLus, there’s a finger sensor and an IR Hello camera on both.

Like with the previous generation, the Zephyrus M16 remains an Intel + Nvidia exclusive design, while the G15 remains an AMD+Nvidia platform. Both have been updated to the latest hardware specs available as of early 2022, though.

As far as the CPU performance goes, the AMD Rembrandt Ryzen 6000 is only a slight refresh of the previous Ryzen 5000 Cezanne hardware, so I wouldn’t expect major changes between the two generations.

For the Intel, side, though, Alder Lake is a completely refreshed platform with the hybrid mix of Performance and Efficiency Cores. On paper, this should end up more powerful than the AMD hardware in demanding loads, and closer in efficiency than before, where the Intel hardware suffered on battery use. It’s too early for now to tell how this hardware is going to actually cope in real life, but we’ll know more once we get the review units.

Aside from the updated memory and potential support for faster memory, the major hardware refresh of these 2022 Zephyrus generations is in the GPU departments, where Ti Nvidia chips are also available now, but especially where the max TGP has been increased to 120W with Dynamic Boostm on most options, and a MUX has been added on all variants. Combined, we could be looking at 20+% extra performance in specific games and GPU workloads, which is no easy feat for a YoY update.

Once more, we’ll need to run proper tests before we can draw any conclusions, once we get the review units. I’m also especially interested in the thermals and noise of these high-CPU-power 2022 Zephyrus models, given the 2021 model already ran rather hot and loud already at max load.

Down below I’ve included a picture of the interior design on the 2022 M16, 2021 M16, and 2021 G15, for the top-specced models. They are very similar, with minor differences that you can observe between the 2022 and 2021 M16s in one of the thermal plates and the spongy material used the isolate the cooling module for the rest of the components, and isolate the airflow over the components.

I’m also looking forward to documenting the efficiency on battery use with these 2022 Intel/AMD platforms, and figuring out if the hybrid Intel design is actually as good as intended and can bring the M16 closer to the G15 in runtimes. There’s still the same 90 Wh battery inside both laptops, and both ship with up to 240W main charger and 100W USB-C PD extra chargers for traveling/commuting.

All in all, I expect both of these 2022 Zephyrus models to remain very competitive and popular within their segment this year.

Last year, the G15 had an advantage in efficiency, configurability, and pricing, while the M16 was the faster gamer. Aside from the mentioned differences in colors, screen size, and Thunderbolt compatibility, this year, the two lineups are going to end up a lot closer in features and overall behavior.

I wonder if the G15 will retain its significant price advantage, though. If yes, many potential buyers would probably still choose the AMD route once more, despite the Intel platform being potentially superior this year.

One other thing I’m curious about is how a mid-tier Core i7-12700H + RTX 3070Ti configuration of the M16 is going to fare against a top Ryzen 9 + 3080Ti configuration of the G15. Depending on your use scenario, if these end up close in performance – which I would expect to be true with gaming and some other loads, that could even bring the value proposition on the Intel side.

We’ll see, lots of things to test out before we can draw proper conclusions, so stay around for our reviews.

In the meantime, I’d like to know what you guys think about these 2022 Asus ROG Zephyrus G15 and M16 updates, which do you prefer, and why, so get in touch in the comments section down below. Plus, if there’s anything in particular that you’d want us to cover in the reviews, let me know as well.