In this article, we’re discussing the 2023 updates of the ROG Flow X13 and Flow Z13 13-inch performance/gaming ultraportable laptops.

I’ve already documented the previous generations in our reviews, over here for the Flow X13 and here for the Flow Z13, so I’m familiar with the particularities of these designs, as well as their strong points and flaws.

These two are the smallest ROG laptops available to date and pretty much the most powerful compact ultrabooks money can buy, able to tackle sustained demanding workloads and games, despite being 13-inch sub-3lbs formats.

The ROG Flow X13 is a 2-in-1 convertible design with a 360-degree screen, while the ROG Flow Z13 is a tablet design with a detachable keyboard folio – think of it as a Surface tablet on steroids.

The illustration below pictures the two 2022 ROG Flow models side by side, and I’ll update it with the 2023 designs once I get my hands on them.

For the 2023 model years, the Flow Z13 tablet received a bump in hardware specs to the latest platforms available from Intel and Nvidia, as well as an updated display option and a few other tweaks.

The convertible Flow X13, on the other hand, is a complete overhaul of the previous generations, with a thicker chassis and refined IO, updated AMD Ryzen + Nvidia RTX specs running at higher power than before, a 75 Wh battery, and a new screen.

We’ll go over the two 2023 Asus ROG Flows down below, comparing them to the previous iterations, and then we’ll follow up with our in-depth reviews in the near future, once these are available in stores.

For starters, here’s a complete specs sheet of the two.

On the outside, the ROG Flow X13 GV302 generation builds on the design principles of the previous model, with textured black metals used for the chassis, and the same convertible hybrid format with a 360-degree display. Hopefully, Asus are able to get their quality control in check, as there were some complaints about the coating on the armrest peeling off with general use around the front edge and corners on the previous models.

The 2023 model is a little more compact footprint that its predecessors, which translates into smaller bezels around the screen and especially on the bottom chin. At the same time, it’s also thicker, which I don’t mind, as it allows for updated internals that we’ll touch on in a bit. Furthermore, the available details suggest that the 2023 ROG Flow Z13 is about the same weight as the previous model, at ~3 lbs for the basic specs. 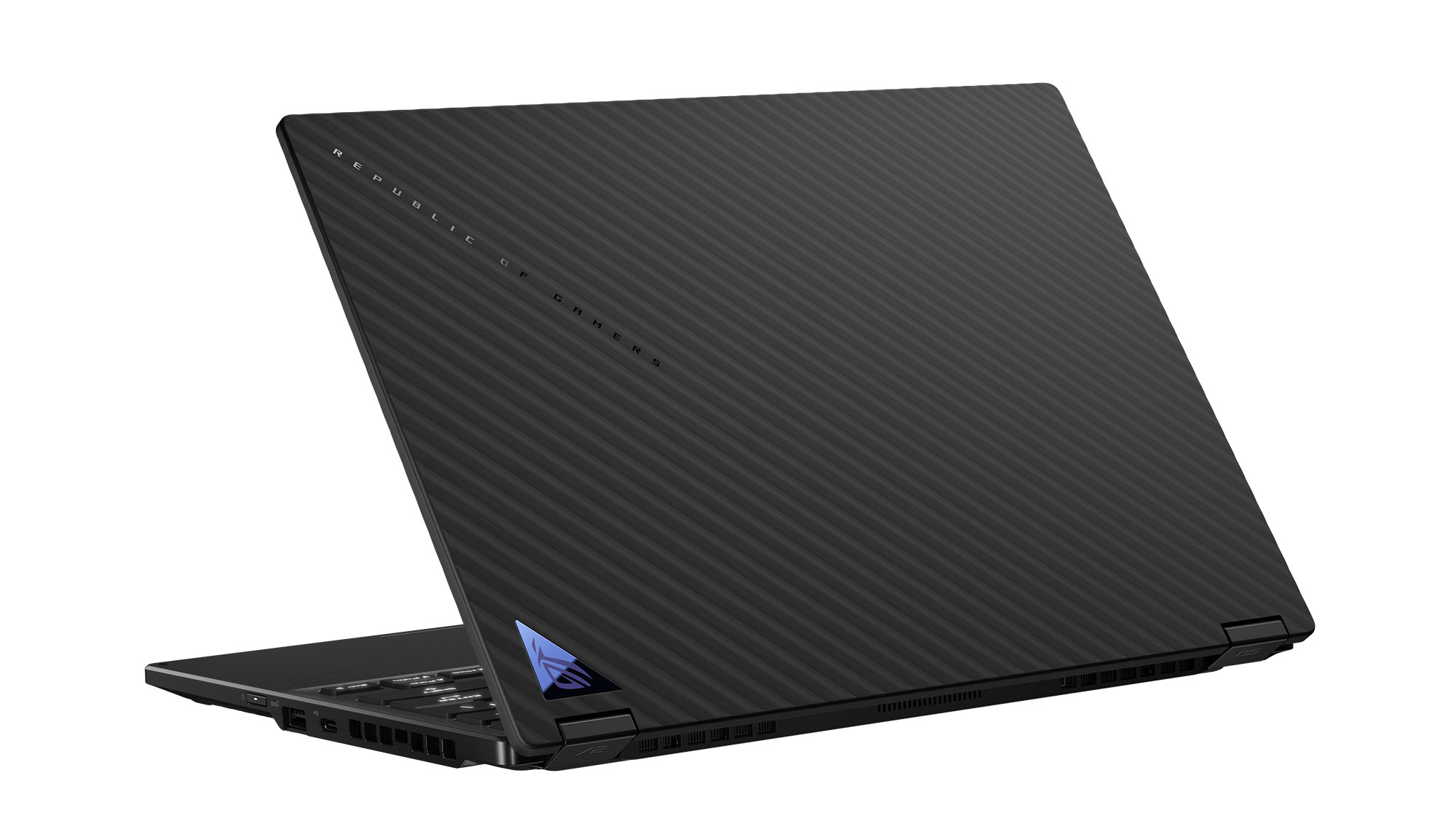 That aside, despite the smaller footprint, Asus were able to keep the ROG keyboard implemented on the previous generation, with 1.7 mm of key travel and dedicated macro keys in the top-left corner of the chassis, but also implemented a bigger touchpad (56% bigger). Plus, they squeezed in a few more ports around the edges, including one USB-C 4.0 port on the right, a full-size HDMI 2.1, and a microSD card reader, alongside the XG Mobile + USB-C port, USB-A, and audio jack available in the past as well.

Compatibility with the XG Mobile external dGPU units remains a strong suit of the ROG Flow lineups, and Asus mentioned they are bringing updated XG units with the latest Nvidia RTX 4000 dGPUs. In the past, the XG Mobile units were only available as bundles with certain configurations of the Flow X13/Z13, and I don’t know if that’s changing for the 2023 models.

For the screens, the laptop is still a 13-inch 16:10 format, with a choice now between either an FHD+ or a QHD+ panel. The latter is a Nebula panel and truly impressive, with QHD+ resolution, 500+ nits of brightness, 100% DCI-P3 color coverage, 165Hz refresh rate, 3ms response, and touch/pen support. This is better suited for a compact gaming laptop than the UHD+ panel option on the 2022/2021 generations. 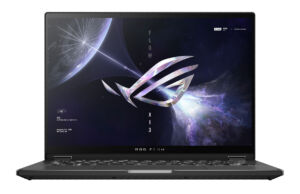 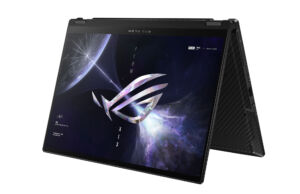 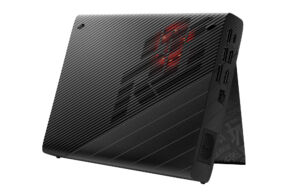 Update: Here are the configurations available for the Asus ROG Flow X13 (2023) generation:

They also mention that they’ve updated the cooling for better air intake, as well as the charger capacity (130W vs 100W before) in order to allow for higher power settings than in the past. That could perhaps mean up to 50-60W sustained on the dGPU and perhaps around 70-80W sustained combined, or something of that sort? For reference, the previous-gen X13 was a 55W combined power design. I’ll update this section once I know more.

One other platform detail worth mentioning for the 2023 ROG Flow models is the support for Advanced Optimus, while the previous models only got a standard MUX that required a restart when changing between modes. GSync support is also mentioned, for both the laptop’s main display and through the USB-C ports to compatible external monitors.

Finally, the motherboard layout is still a little unclear, with most sources mentioning soldered RAM (with faster LPDDR5-6400 memory on this generation) and   still an M.2 2230 SSD slot (for up to 2 TB of space).

The cooling module doesn’t seem to have changed, although I expected it would. It’s still the same dual-fan, tri-heatpipe, tri-radiator design with Arc Flow fans and Thermal Grizzly Liquid Metal compound applied on the CPU. I wonder how this will cope with the updated power settings, given our experience with the previous models, which ran pretty hot, especially when having the laptop flat on a desk with the intake fans choked up. We’ll specifically look into this aspect in the review.

One other notable interior change is the updated battery, now 75 Wh in capacity, a notable increase from the 62 Wh battery in the previous models. The charger has been updated as well, to a 130W brick – it’s still USB-C and a little bigger than the previous 100W charger.

I can’t tell yet if the speakers were updated in any way, though, and I’d reckon they probably have not, otherwise, Asus would have mentioned them in the press brief. Nonetheless, the audio quality was alright already, so an update wasn’t crucial.

They did mention an updated 2 MPx camera with IR functionality placed at the top of the screen, which is a welcomed addition, given the poor camera quality on the previous X13 and the lack of IR. Not sure if the finger sensor in the power button is still available for this 2023 model year, though.

All in all, the 2023 Asus ROG Flow X13 GV302 series is a little more compact than the previous X13 generations, while offering a better mid-range display, better inputs, significantly faster hardware, and a larger battery. You’ll have to wait for our detailed review before drawing any conclusions on how much faster is this Ryzen 9 7000 + RTX 4070 generation compared to the previous Ryzen 9 6000 + RTX 3050Ti model, as well as whether Asus were able to refine the fan-noise or the performance in sustained loads in any way with the new model.

Availability for the new X13 should be around February-March, with prices to be further announced. Given the bump in specs, I expect the higher-tier models to easily go for 2000++ USD/EUR.

Here’s a complete specs sheet of the two Z13 generations.

Unlike the 2023 Flow X13, the 2023 Flow Z13 convertible is a hardware bump and minor refinement of the previous 2022 Z13 chassis albeit these early specs sheets suggest a slight increase in thickness for the new model. Not sure if that’s right.

Regardless, the Z13 was already a newer and superior design than the previous X13, and to some extent, remains one. Sure, it’s a tablet format so not as practical to use on the lap or on the go, but at the same time, it’s a more comfortable tablet and a better desk laptop, due to its excellent thermal module and unrestrained flow of fresh air into the fans. 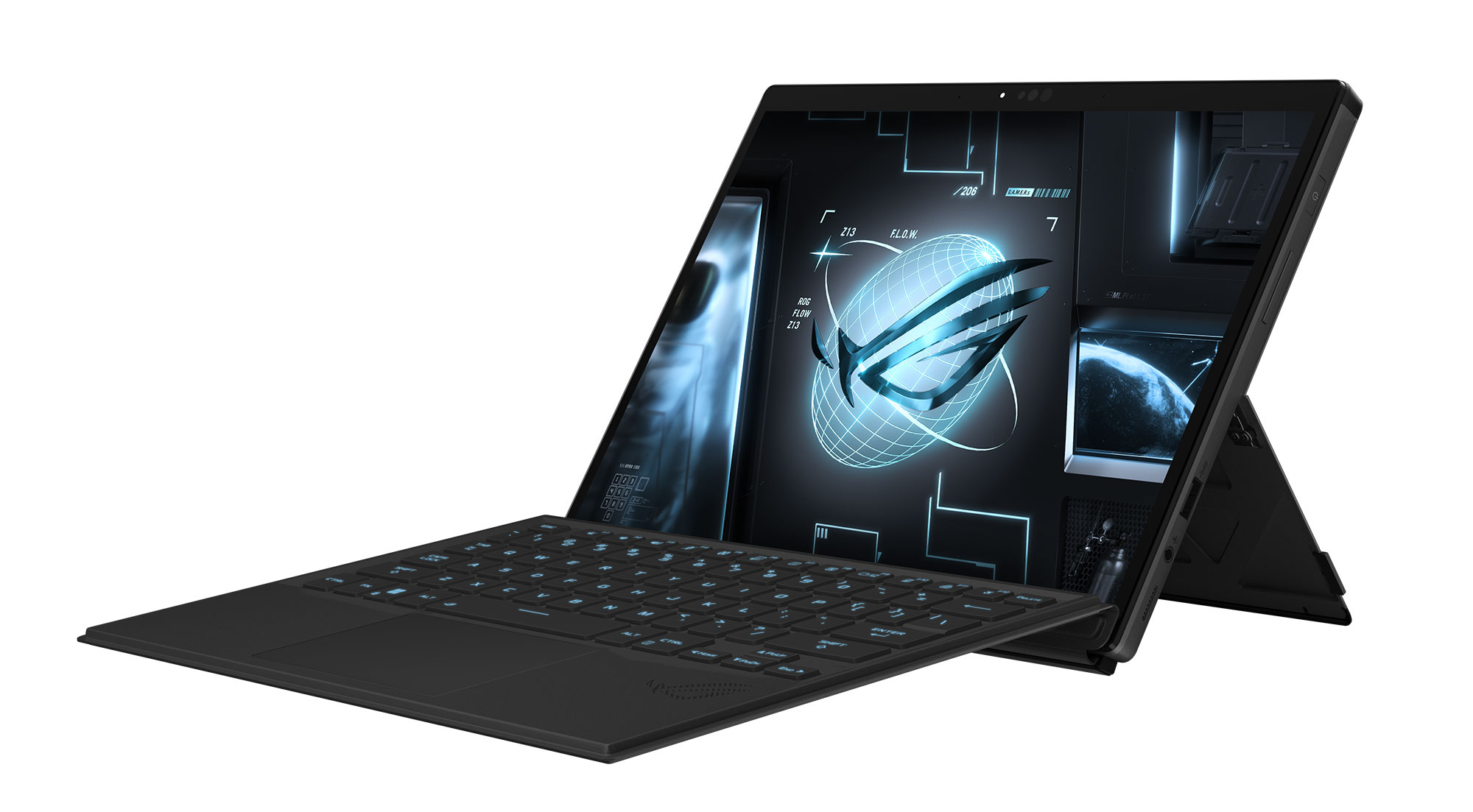 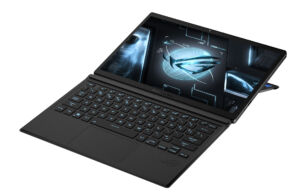 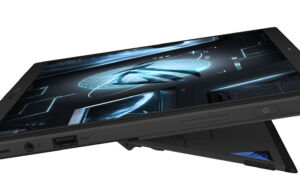 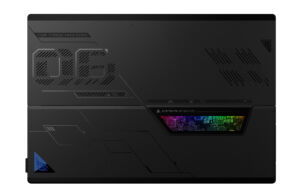 You might already know from our past reviews that the Z13 is a quieter and cooler running computer than the X13. For the 2023 model, Asus updated the charger to 130W and bumped the power settings, implementing an up to 65W sustained GPU and 70+W combined CPU+GPU settings. That’s 10+W higher than on the 2022 Z13, and will translate in a boost in performance, but also a possible increase in fan noise and/or temperatures.

Furthermore, the 2023 model gets an updated Intel 13th-gen Core i9-13900H processor and up to an RTX 4060 8GB dGPU, which should translate in notable performance gains, especially on the GPU side.

Update: Here are the configurations available for the Asus ROG Flow Z13 (2023) generation:

However, as far as the rest of the specs go, looks like the new Flow Z13 is still limited to up to 16 GB of RAM configurations and up to 1 TB of SSD storage, due to the M.2 2230 implemented SSD format. It still gets the same 56 Wh battery as before, so is not going to be a match for the AMD-based ROG Flow X13, especially with the larger 75 Wh battery in the newer model.

Specs aside, Asus have also updated the cameras on this Flow Z13, implementing a 5 MPx front webcam with IR and a 13 MPx back camera, and they offer the same QHD+ 500-nits Nebula display here that is also available on the X13.

As far as availability and pricing goes, the 2023 ROG Flow Z13 should also be available in stores around February-March of this year, and will probably sell for a few hundred more than a similar-tier X13, based on past experience. That means the i9 + RTX 4060 model will easily set you back more than 2000 EUR/USD.

We’ll update the article once we know more about these two Flows and correct any of the errors that might have slipped in this early preview. We’ll also cover these in in-depth reviews in the weeks to come, so stay close for those.

In the meantime, let me know what you think about these updated ROG Flow X13 and Flow Z13 performance ultrabooks. I have to admit I’m excited about the bump in performance with these 2023 models.