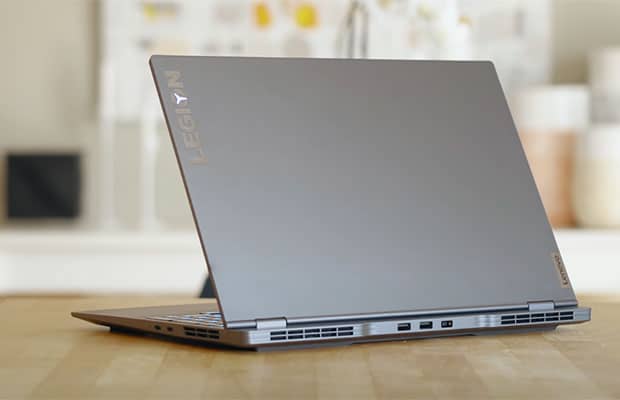 This article originally covered the mid-2020 launch of the Lenovo Legion Slim 7, which eventually never arrived in stores.

In the meantime, though, as of early-2021, Lenovo announced the updated Legion Slim 7, similar to the 2020 model in many ways, but with some slight refinements and this time built on 2021 hardware: AMD Ryzen 5000 processors and Nvidia RTX 3000 graphics.

Lenovo have yet to provide the full picture on this new Slim 7, except for a couple of blurbs of information and some renders, so stick around as we’re filling up the blanks here.

From what we know so far, this Legion Slim 7 is a compact and slim 15-inch laptop that weighs around 1.9 kilos (4.2 lbs) and is entirely crafted out of magnesium and aluminum alloys. This time it also comes in a Shadow Black color variant, alongside the standard Storm Grey color normally offered with Legion 7 models in recent years.

Update: Our full review of the Legion Slim 7 series is available over here.

It also gets a white or RGB-lit Corsair iCUE full-keyboard with a NumPad section, and a larger glass clickpad than any Legion before, plus a camera at the top of the screen, a quad-speaker system, and the IO lined around the sides. I’m looking at USB-C slots on the right side, a full SD card reader and the audio jack on the right, and the PSU and two USB-A slots on the back. That’s similar to the Slim 7 announced in September 2020, but with some design changes around the exhausts and what looks like an even smaller footprint, judging by the size of the bezels around that screen. 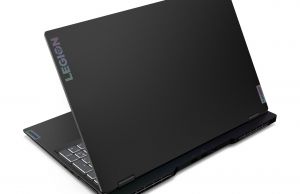 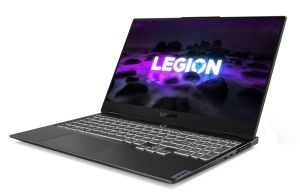 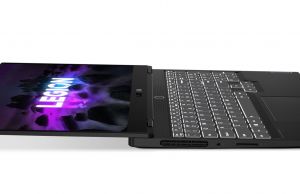 This aside, the press info also mentions an updated Coldfront 3.0 thermal design, with two fans and quad-radiators, as well as liquid metal applied to the processor.

The 2021 Lenovo Legion 7 Slim series is built on Ryzen 5000 and RTX 3000 hardware, with a 71 Wh battery and hopefully dual RAM slots and dual M.2 SSDs. That’s yet confirmed and based on the specs of the original Slim 7 launched last year.

The official specs don’t mention whether we’re looking at Ryzen 9 H 45W or HS 35W processors, or the exact kind of graphics, but an AMD Ryzen 9 5900HS with an RTX 3060 dGPU (probably MQ) would make the most sense to me in this sort of a chassis. Update: THis has been confirmed with 45W Ryzen processors, up to Ryzen 9 5900H, and an RTX 3060 MQ dGPU.

Competent performance/noise profiles, ActiveSync, and Dynamic Boost technologies meant to divert power between the CPU and GPU based on loads should make it into this flagship product.

That’s about what we know of this 2021 Slim 7 series for now. Oh, and it’s also scheduled ins stores around May 2021, at yet undisclosed pricing. So if you’ve been waiting for this for a while, as I know some of you have, tough-luck, it’s still several months out of reach.

I’m quite excited about this myself, and I’m seeing it as a more powerful alternative for the ThinkPad X1 Extreme, with beefier AMD hardware and graphics. Not a big fan of the full keyboard layout, but it does otherwise seem to tick all the other right boxes. Judging by the popularity of the X1E series, I’d expect this to attract its own crowd, when eventually available.

Lenovo sell some of the best-value performance/gaming laptops available these days with their Legion 5 and 7 series, yet those are full-size laptops and might not always cater to potential buyers that are looking for something perhaps not as powerful, but lighter and easier to grab along.

If that’s you, then these newer Lenovo Legion Slim 7s models that are scheduled for release in this last quarter of 2020 might be of interest.

In just a few words, these are slimmer and lighter iterations of the popular Legion 7, with still powerful hardware specs, long battery life, and solid screen options. They do compromise to some extent on the hardware specs, IO, and thermal design compared to the full-size Legion 7, though, aspects that need to be balanced out by the more portable form-factor.

This clip down below quickly compares the Legion Slim 7 to the regular Legion 7, so you’ll know what to expect in terms of design, IO, inputs, and technology when opting for one over the other. It’s about the Intel-based Legion Slim 7i, but most of it also applies to the AMD-powered Slim 7 as well. We’ll get to that in a bit.

Then, here’s a quick specs sheet of the Legion Slim 7 lineup next to the standard Legion 7, and we’ll dive into some details further down.

Ok, it’s obvious that while the Legion 7i is primarily a gaming laptop with those screen and GPU options, as well as the Advanced GSync support, the Legion Slim 7 is more of a multi-purpose laptop and a powerful notebook targeted at creators/editors/professionals on the go. It’s the only one of the two to offer an SD card reader or a UHD screen option with 100% AdobeRGB color coverage, and is also the only one available with a choice of either Intel or AMD hardware.

That aside, the Legion Slim 7 is .3 of a kg lighter and slightly smaller and thinner than the full-size Legion 7, and with the less powerful hardware, it also ships with a smaller power brick, something else to consider when carrying the laptop around every day.

On the other hand, the standard Legion 7 has its own share of advantages, such as the faster screen options and more powerful GPU choices, the dual-storage with RAID support, the more complex IO, and the larger battery, among others, as well as what I expect to be a more capable thermal implementation with the vapor-chamber design. This is especially something to look for in the detailed reviews of this Slim 7 version, which implements a more standard thermal module similar to what we’ve seen in the Legion 5.

Sure, that only needs to cope with a 65W dGPU, but still needs to cool the power-hungry processors in this space-constrained chassis. 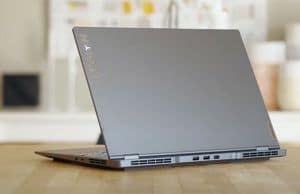 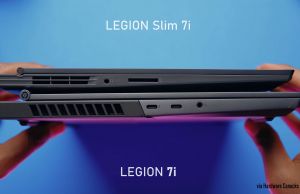 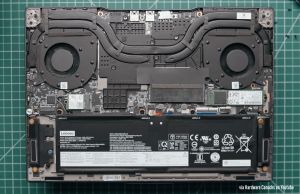 And here’s where we get to what;s perhaps the most interesting part of this Legion Slim 7: it’s one of the very few compact laptops built on AMD Ryzen 4000 hardware, with up to a Ryzen 9 4900H processor at the very top.

So far, the Asus ROG Zephyrus G15 was the only other such available laptop that I can think of, but with its own share of compromises, as that is an older 2019 chassis updated to 2020 hardware. Sure, there’s also the Zephyrus G14 out there, but that’s a smaller screen model. In comparison, Lenovo had a lot more time on their side to put up a better-balanced product that can hopefully tame that Ryzen 9 processor and mid-range Nvidia GPU the right way.

As for the Intel-based configurations, those can be specced up to an Intel Core i9-10980HK processor with the same kind of Nvidia graphics, but Comet Lake is more power-hungry and less efficient than the AMD platform, and should be your choice only if you’re primarily looking to run workloads that would benefit from some of Intel’s design particularities and superior single-core performance. Otherwise, I’d recommend going with AMD.

One thing to keep in mind, though, is that Lenovo mentions that they’ve implemented the Max-Q Dynamic Boost technology on the Nvidia GPUs, which allow the system to increase the GPU’s allocated power by up to 15W when needed, while subtracting it from the CPU. That means more power can be allocated to the GPU in games, which could push the 65W 2060 in these laptops to perform closer to a full-power 80W 2060 implementation. However, what I don’t know at this point is whether this is properly supported by both the Intel and AMD variants, or is just something reserved for the Intel configuration. 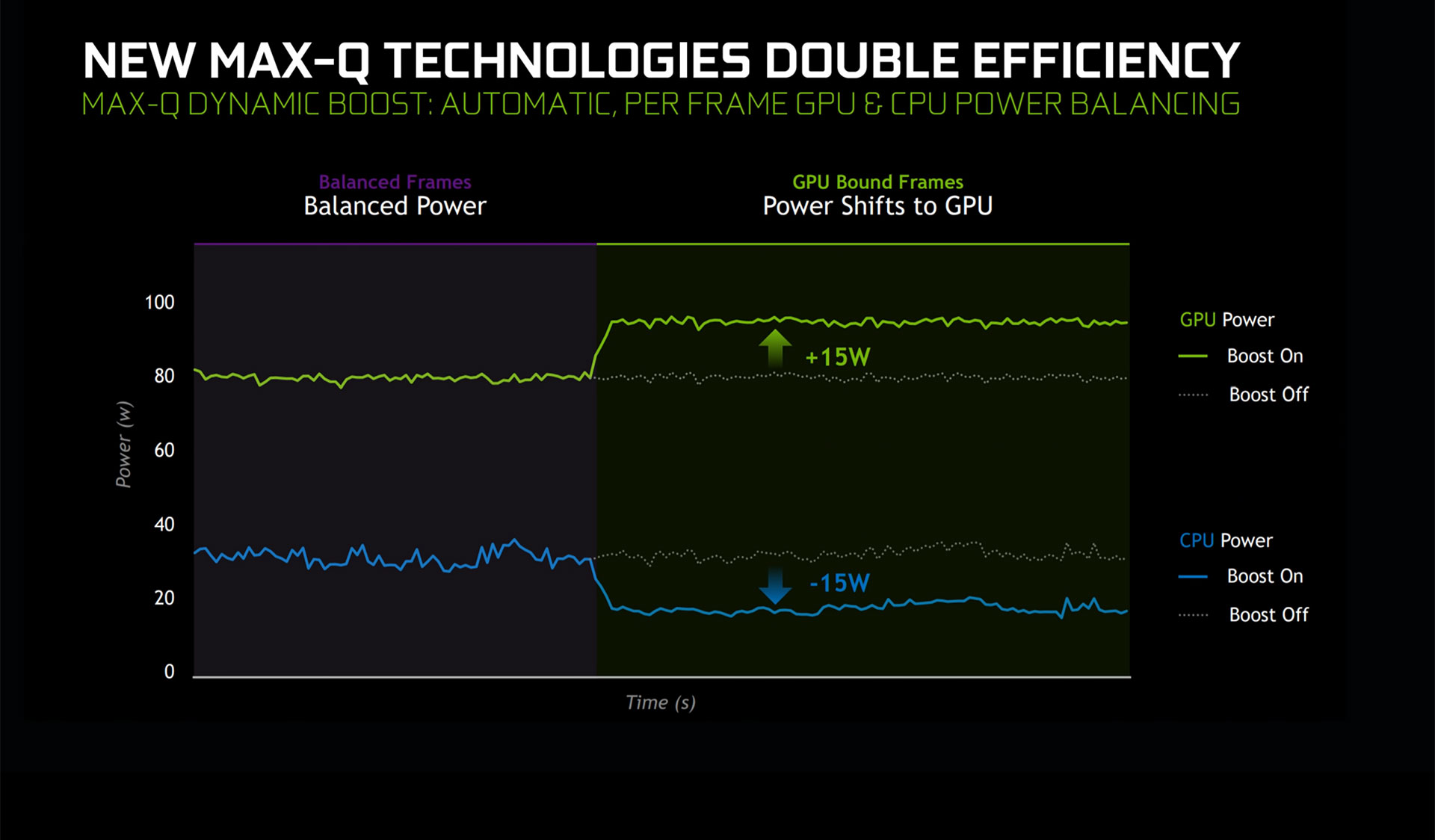 Nonetheless, we should have our answers shortly, as the Legion Slim 7 should go on sale in late October 2020, starting at $1369 for the AMD model and $1349 for the Intel versions.

Image credit: This video made by Hardware Canucks on Youtube.