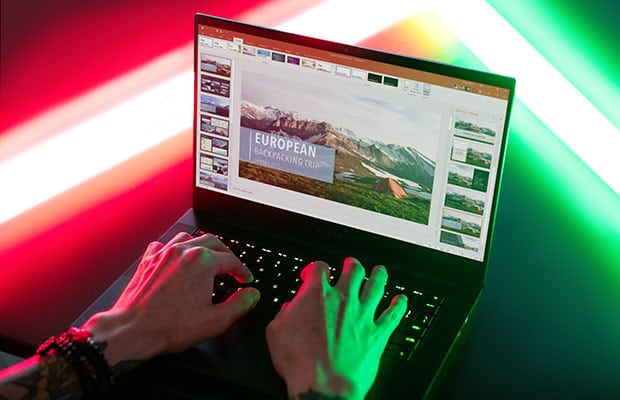 But what was a true shocker was that they managed to cram a full-power Ryzen 9 5900HX processor and anything bigger than a 3060 in a 14-inch product.  In fact, they actually have a model with a 3080 GPU that runs at up to 100W!

This will, by far, be the smallest laptop to carry this kind of graphics, and on top of that, Razer joins the Ryzen club with potentially better battery life and CPU performance than their previous Intel-exclusive notebooks.  The pairing of a Ryzen 9 5900HX with a RTX 3070/3080 is about as good of an entrance as you can make, too.

I do reserve some doubts as to how they are managing to keep these components cool in such a thin chassis.  It’s actually a safe assumption that there are going to be some power limits on both the CPU and GPU in order to keep thermals in check. 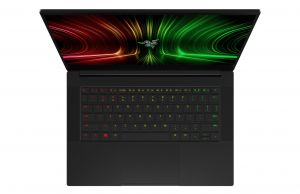 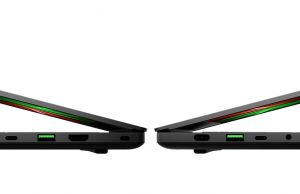 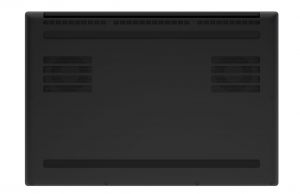 The GPU TGP is reportedly up to 100W, which is on par with what the Razer Blade 15 is set at.  But “up to” doesn’t necessarily mean it will stay there – it could very well sit at 80W under constant load.  Even so, a 3070/3080 at around 80W is still faster than anything else out there at this weight class.  We’ll soon find out when we get a review unit in to test.

At the same time, all models are locked into 16GB of soldered RAM, due to space concerns. Bummer, 32 GB options would have been nice. The SSD is 1 TB and is upgradeable, so no worries there.  Only a single SSD slot, though, not two. 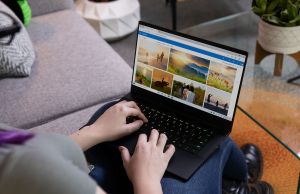 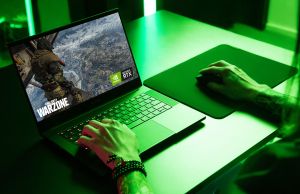 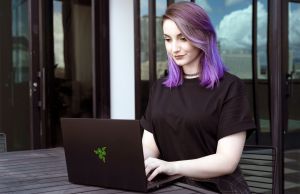 As for the size, we’re looking at a laptop that’s only .66” thick and weighs just under 4 lbs.  On paper, it’s a tiny bit heavier than the 2021 Asus Zephyrus G14, but it’s 17% smaller in overall volume.  Compared to the Blade 13 Stealth, it’s only 1 mm thicker and a little over half a pound heavier.

Either way, you look at it, this Blade 14 is small.

Other notable mentions are the inclusion of up-firing speakers, a Windows Hello webcam, and a 61.6Whr battery.  The battery is small, but this is nonetheless a small device.  The CPU being Ryzen base will likely help, even if it’s not an HS series.

The best part is this Blade 14 is on sale right now, at launch.  Retailers such as Amazon, Microsoft, and Best Buy will have units on sale starting today.  Also check out Razer’s webpage for all three models, if you want to buy it directly from them.

All in all, I’m really looking forward to getting a review unit in and putting it through the paces.  I’m interested to hear if this is something of interest for you all too.  Stay tuned for my full review.

Since Razer directly pitches this Blade 14 against the ROG Zephyrus G14, and I wanted to add my thoughts on this as well. BTW, this is Andrei writing this part of the article.

Question is, can this deliver on the performance suggested by the HX CPUs and 100W GPUs? That’s something Derek will be able to test once he gets the review unit.

I find the fact that Razer bundles this model with a 230W charger somewhat reassuring. They also mentioned the vapor-chamber cooling module that supposed to keep everything in check in this compact chassis, something that worked well on past Blades products. Furthermore, the GPUs are advertised at up to 100W, so I’d expect they’re 80W with + 20W Dynamic Boost shifted away from the CPU, similar to the 15-inch Blade.

I also wanted to touch on the fact that Razer put up to 3080 GPUs in this product. We’ve actually tested the 80-100W 3070 and 3080 versions of these chips in the Zephyrus G15 series, which is a larger 15-inch chassis, and concluded there that the 3070 is the better value of the two, as the 3080 provides little improvements to justify paying the premium for. Which is significant here, at $600. So I would aim for the mid-level 3070 configuration, that’s the smarter choice imo.

Razer also went with a Ryzen 9 5900HX processor in this laptop and not the more efficient Ryzen HS bins, which look to still be an Asus exclusive for now. Shouldn’t matter much, though, the HX can be power-controlled and adjusted, and as Derek mentioned, I’d also expect some power limitations to be set in order to cope with the hardware inside this compact format, especially since Razer products tend to run quietly, and normally at lower power settings than their direct competition.

Specs aside, I’m glad to see that the Blade is a standard design, with the IO, inputs, fans, and radiators placed where they should be. I’m also happy to see up-firing speakers, a webcam with IR, and uncompromised inputs, although that’s one aspect where the Zephyrus G14 is very competitive as well.

However, I’ve never been a fan of the Ergolift form-factor that Asus implement on their G14 (and G15/M16, for that matter), which blows the hot air into the screen and squeezes all the ports on the front left edge, which makes me appreciate Razer’s traditional format even more. I also expect the build quality to be excellent on the Blade, much like with all their other products, and overall better than the Zephyrus. Hopefully, they also keep their QC in check.

The G14 and Blade 14 are otherwise about the same footprint, but the Blade is thinner and looks like the G14 is lighter. The extra space inside also allows Asus to include a larger battery, which paired with the Ryzen HS platform should give it an edge here. There are also quad-speakers on the G14 and I’d expect better audio quality, at least based on our past experience with the speakers in the Blade Stealth.

All in all, the G14 is now a 1.5 years old design, so Razer sure had their time to design what could be a better product in the 14-inch niche of performance notebooks. Even so, the Zephyrus remains a competitive product and looks like can still outmatch the Blade in some areas.

You will also have to pay a premium for this Blade 14, especially once you jump to the 3070 and 3080 configurations, so we’ll have to wait for the review to figure out the value in those options.

Either way, this Blade 14 has the potential to be one of the best performance ultraportables of the year, and I’m looking forward to our review for the full picture.

Disclaimer: Our content is reader-supported. If you buy through some of the links on our site, we may earn a commission. Learn more.
In addition to being a tech enthusiast, Derek has a career as a biomedical engineer. He enjoys taking things apart, figuring out how they work and finding ways to make them better. His other hobbies include spending time with his family, "Do it yourself" projects such as home automation and running.
← Previous Story Asus ROG Zephyrus S17 GX703HM review (i7-11800H, RTX 3060, QHD)
Next Story → 4K 120Hz laptops – a complete list – Razer Blade Pro 17, Asus StudioBook and others