Most gaming laptops these days ship with fast screens, with refresh rates of 240/360 Hz or more recently, even 480 Hz. However, many of these options are only FHD (1920 x 1080 px) in resolution, which is fine for most configurations and most gamers, but might not suffice for the enthusiasts looking for the most powerful gaming laptops and the sharpest of details, but also for a competent work companion.

In recent years, performance laptops with 4K 120 Hz screen options have also been launched, as well as middle options with QHD resolution and 165-240Hz refresh, which are a topic for another article. This one is all about the laptops available with UHD 4K 120Hz displays.

Razer were the first to offer a 4K 120Hz screen option for their retail Blade Pro 17 (which we’ve previously reviewed in the FHD variant over here), even if Asus initially mentioned it for the ROG Zephyrus GX701 and their StudioBook One workstation in 2019. Other OEMs followed up quickly, and while the offer for such computers is still limited today, there are quite a few to choose from. In recent years, there are also 4K UHD 144Hz panels offered in several of these premium-tier devices.

Several panel manufacturers make this sort of fast 4K screens, available in either 15-inch, 16-inch or 17-inch sizes. All of them are high-gamut, with 100% coverage of the DCI-P3 and AdoneRGB color space and factory calibrated with most configurations, as well as above-average in brightness (400-500-nits), contrast, and blacks, but also 120 Hz refresh and fast response times (advertised at as low as 3ms). That’s why these 4K screens are not just meant for gaming, but they’re actually excellent tools for creators and professionals that require a color-accurate display in their line of work.

So while in the past you could only have one or the other: either a fast FHD screen, or a 100% AdobeRGB UHD screen at 60 Hz, now you can have both fast refresh and 4K-UHD resolution in a single product. That’s if you’re willing to pay the hefty price tag, of course, which is roughly several hundred dollars on top of the FHD/QHD variants. Inf act, you’ll probably pay even more, as these 4K 120Hz screens are most of the time only available on the highest-tier notebook configurations. 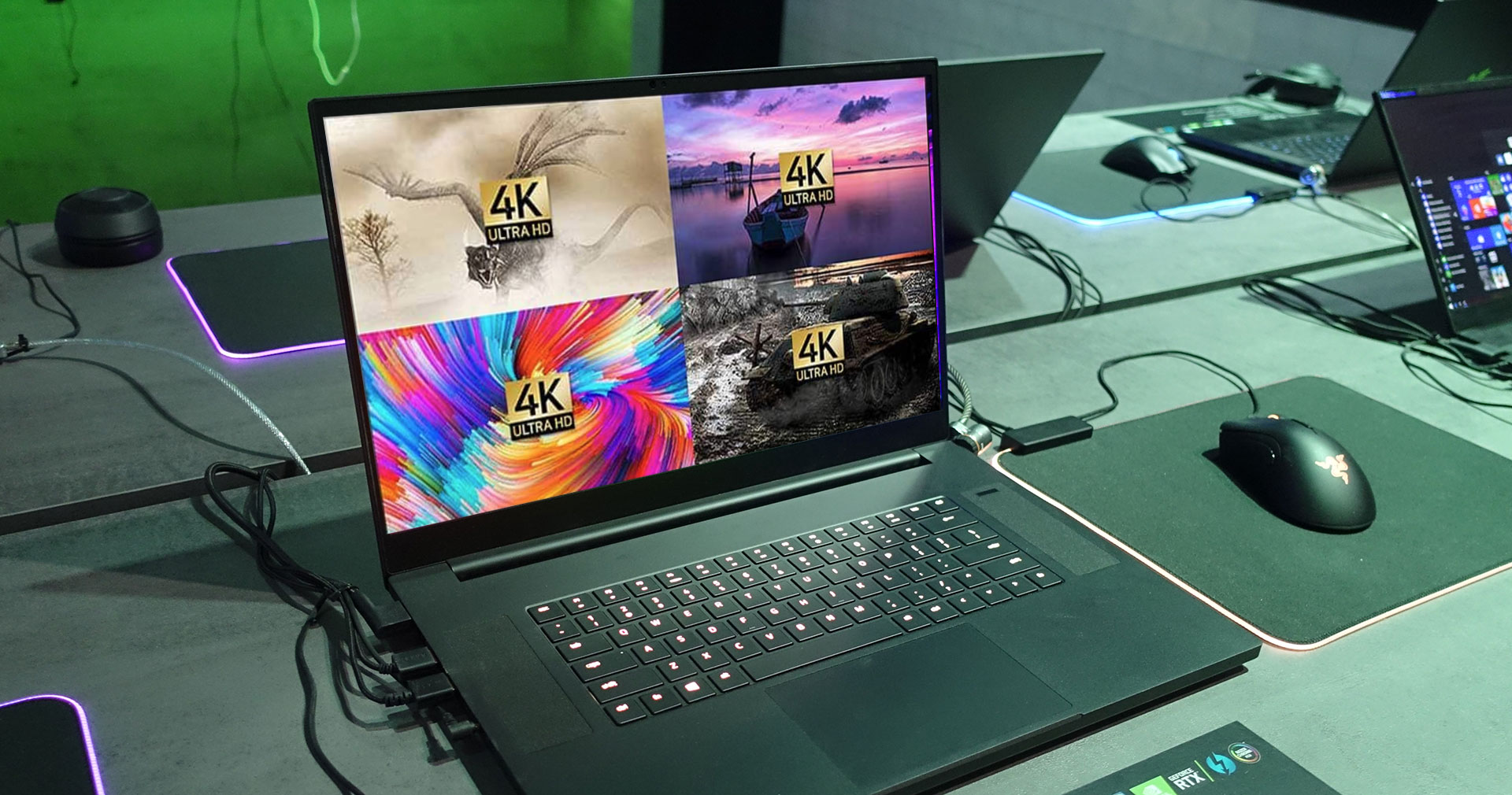 And there’s one more reason these 4K 120/144 Hz screen options only make their way into the highest-end configurations of the highest-end performance and gaming notebooks out there: it takes beastly hardware to run moderns games at high details and 60++ frame-rates, in order to justify gaming on this kind of a display.

That actually means that most OEMs only offer this screen option alongside RTX 3080/3080Ti (or later) graphics, or the equivalent Quadro A-class options for workstations. And even if you can find the high-res high-refresh screen on a mid-tier system, I’m not sure I’d recommend it anyway, due to the hit in graphics performance at this resolution over QHD.

We’re keeping our eyes peeled in order to update the list below as more options are being announced, but so far, here are all the laptops that you can get with 4K UHD 120Hz and 144Hz screens right now. And if you spot anything that should be in here and is not, make sure to tell us about it in the comments section down below. Thanks!

These aside, there’s also a larger selection of laptops available with 4K 60 Hz OLED or IPS screens, also excellent choices for creators, but less so for gaming. We haven’t included those in here, but if you’re interested in OLED laptops, you’ll find more about them via this link.

That aside, there are also a few laptops with 120Hz OLED displays available on the market right now, from Asus or Lenovo, but those are 2.8K 120Hz OLED panels, not 4K, thus we will not go over them in this article. For the time being, there are no 4K 120Hz OLED laptop panels, but they might come in the near future.

Also, I for one am far more interested in the fast and good-quality QHD panels available these days at either 15 or 17 inches, which we’ll cover in a separate article. They’re just better balanced for the hardware available with laptops today, more affordable, and still versatile enough at 100% DCI-P3 color coverage in most cases, and 300++ nits of brightness.

Disclaimer: Our content is reader-supported. If you buy through some of the links on our site, we may earn a commission. Learn more.
Andrei Girbea, Editor-in-Chief. I've been covering mobile computers since the 2000s and you'll mostly find reviews and thorough guides written by me here on the site.
← Previous Story Asus TUF Gaming F15 review (2022 FX507ZM – Core i7-12700H, RTX 3060)
Next Story → Lenovo ThinkPad Z16 and Z13 – AMD Ryzen Pro 6000 premium laptops