AMD Ryzen platforms have been at the core of budget-gaming laptops in recent years, but that’s changing as of 2020, with the release of the Ryzen 4000 H platform.

This time around AMD laptops are able to compete and even outmatch their Intel counterparts in terms of performance, features, efficiency, and pricing, thus I expect a lot of interest around these AMD products in the months to come.

While we’re testing and working on our reviews for several different Ryzen H notebooks, this article will provide details on the mid-range Ryzen 7 4800H and Ryzen 7 4800HS platforms, as well as the mid-tier Ryzen 5 4600H/HS options, which will power the vast majority of these 2020 laptops. It also includes a detailed list of all the devices built on Ryzen 4000 hardware platforms, both those already announced and launched, as well as those rumored to be unveiled in the near future.

Update: A handful of Ryzen 4000 laptops are available in stores now. See this link for updated configurations and prices.

But first, a quick specs sheet of the Ryzen 4000 H lineup.

All these processors are built on the same Zen 2 7nm process and offer similar features and characteristics. What sets them aside is the number of cores/threads, Base and Turbo frequencies for those cores, as well as the type of integrated Radeon Vega iGPU. The entire lineup consists of APU, with distinct CPU and iGPU.

The Ryzen 7 4800H is the workhorse of the platform, a followup of the wide-spread Ryzen 7 3750H and a direct match for the Intel Core H i7s available in most modern laptops (i7-9750H, i7-10750H). It will make its way inside most AMD SKUs this year, and most likely offer the best bang for your buck. Budget configurations will also be available with the Ryzen 5 4600H 6C/12T processor.

The Ryzen 7 4800HS/Ryzen 5 4600HS are the more efficient bins of the 4800H/4600HS, with similar capabilities, but within a more efficient 35W implementation. These APUs will find their way inside some of the higher-tier ultraportable SKUs, such as the Asus Zephyrus G14 and G15, and will cost more than the 45W variant.

Furthermore, AMD will only offer HS processors to select OEMs that accept to work alongside on the design and the software of their products, in order to make sure that Ryzen HS products offer the best user experience the platform is capable of.

The Ryzen 5 4600H (and its 35W Ryzen 5 4600HS variant) are the lower-tier variants with 6C/12T and lower-level graphics, budget alternatives for the Ryzen 7 and 9 builds, as well as tier-matches for Intel’s Core i5 H platforms. Most laptops that offer Ryzen 7 and 9 configurations will also be available with Ryzen 5 hardware for their base-level configurations.

Finally, I can’t yet share the results of our benchmarks with you (will update in the future), but I will include AMD’s own results of a Ryzen 7 4800H notebook versus an Intel i7-9750H configuration, both paired with an Nvidia RTX 2060 graphics chip. AMD seem to have a significant edge in productivity tests, but also in most games, the Achille’s heel for past Ryzen laptops. Take these with a lump of salt though, and make sure to check out 3rd party benchmarks results as well, once those are available. 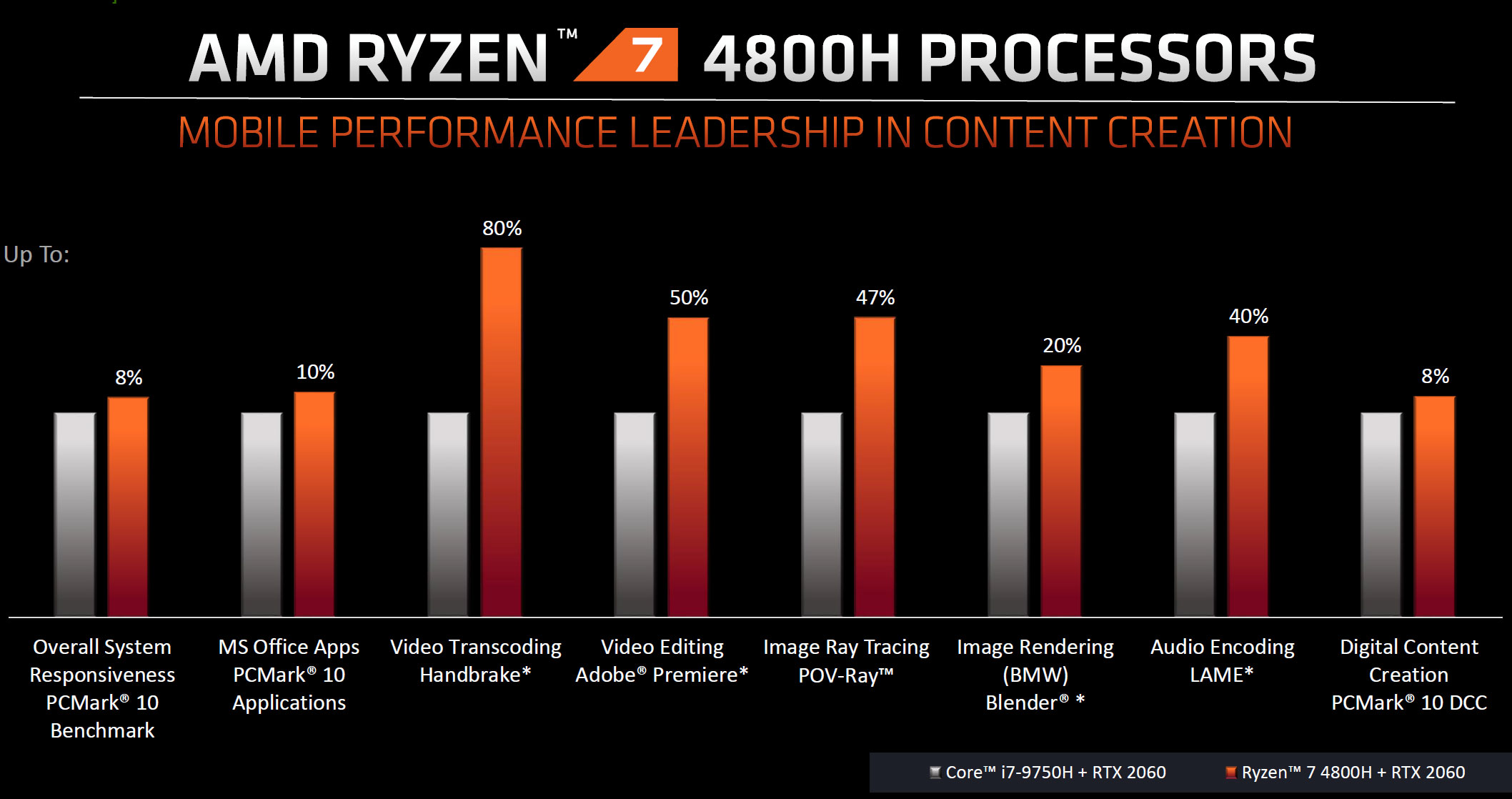 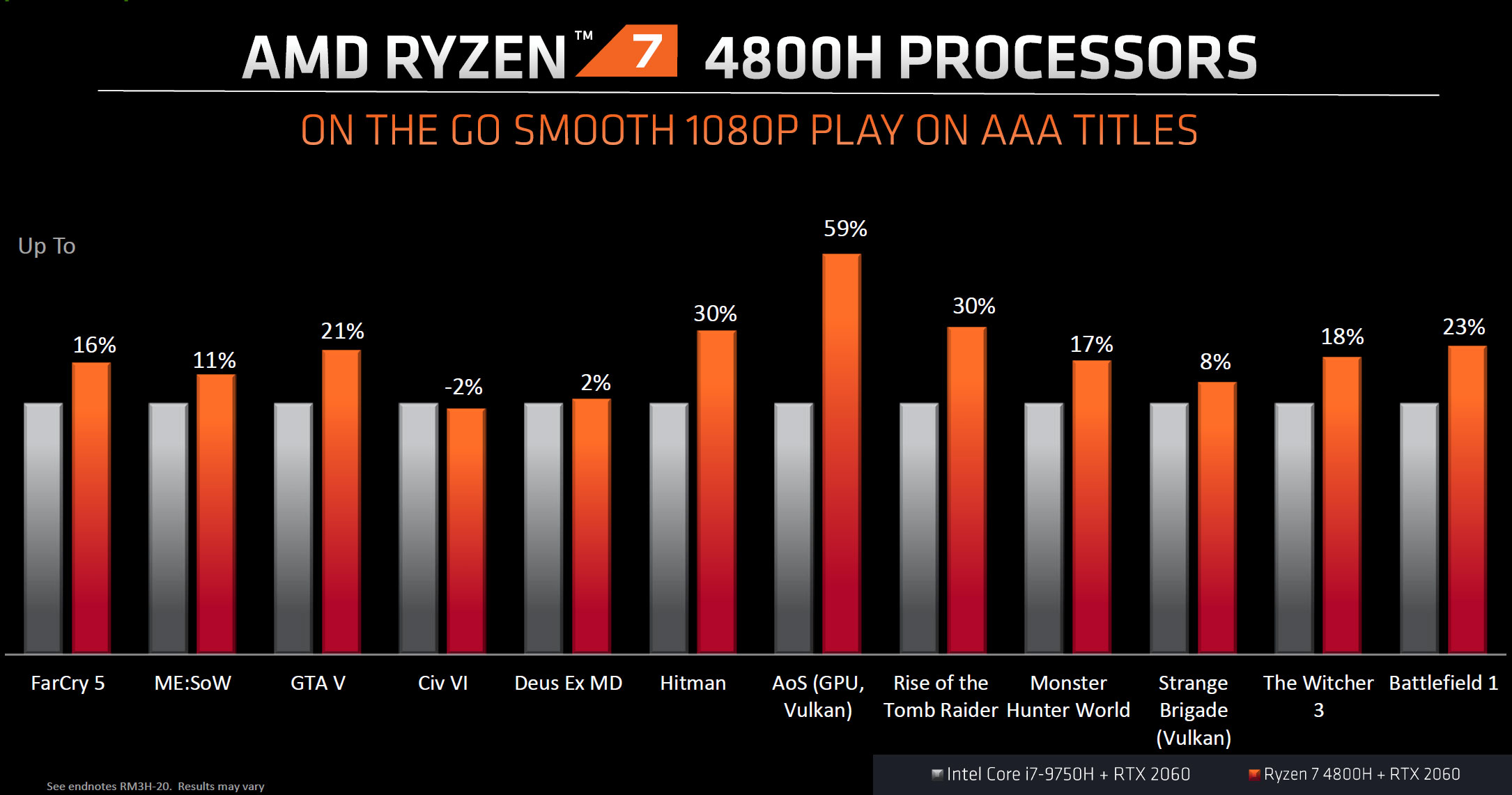 Those being said, here are the lists of the announced or rumored Ryzen 7 4700HS and Ryzen 7 4800H notebooks. This is a work in progress and we’re constantly updating it with new entries as they are launched, so let us know in the comments below if you spot any mistake or any product that should be included here and is not.

This section includes ultra-portable notebooks built on the Ryzen 7 4800HS or Ryzen 5 4600HS 35W versions of the AMD APUs. Some of these are also available with higher tier Ryzen 9 4900HS hardware, which is mentioned when true.

Asus have been given exclusive access to the AMD HS processors for a few months (up till Q4 2020), so it will be a while until we’ll see Ryzen HS products from other OEMs.

This section includes the full-size notebooks built on the 45W Ryzen 7 4800H and Ryzen 5 4600H hardware platforms. Some of these are also available with the higher-tier Ryzen 9 4900H processor.

My attention would go primarily towards the Asus TUF Gaming A15, Eluktronics RP-15, HP Omen 15 and the Lenovo Legion 5 if you’re looking for full-size performance/gaming laptops, or those Huawei MateBooks if you’re after a powerful productivity-focused ultraportable.

Disclaimer: Our content is reader-supported. If you buy through some of the links on our site, we may earn an affiliate commission. Learn more.
Andrei Girbea, Editor-in-Chief of Ultrabookreview.com. I've been covering mobile computers since the 2000s and you'll mostly find reviews and thorough guides written by me here on the site.
← Previous Story Intel Core i5-1035G1 benchmarks and tests, vs i5-10210U, i5-8265U and Ryzen 5 3500U
Next Story → AMD Ryzen 9 4900H/4900HS laptops – benchmarks and complete list of notebooks