Over the last many years, Razer made some of the best premium performance thin-and-light laptops available on the market with their Blade lineups (and we’ve covered most of them in our past reviews). Pristine build quality and a balanced set of features and specs put these on the map of many enthusiast buyers with a thick wallet, as these were always among the most expensive Windows notebooks available.

For the 2023 models, though, Razer took a slightly different approach with these Blade 16 and Blade 18 updates. They’re still excellently made and expensive, but these finally offer 16:10 displays and powerful implementations of the latest Intel + Nvidia hardware. However, as a result, these Blades have also gained a fair bit in thickness and especially in weight in comparison to their predecessors.

Thus, the 2023 Blades are no longer competing against other lightweight performance/gaming laptops, but rather against the full-size options with uncompromised performance, such as the Lenovo Legion Pro 7, the Alienware m16/m18, or the Asus ROG Scar 16/18 lineups.

Down below you’ll find specs sheets of these 2023 Razer Blades alongside the 2022 models, as well as further details on the important changes of each variant.

Update: Here’s our detailed review of the 2023 Razer Blade 16 series. We’ll follow up with our review of the Blade 18 in due time.

And here are some images of these two 2023 models side by side (source: Engadget.com) 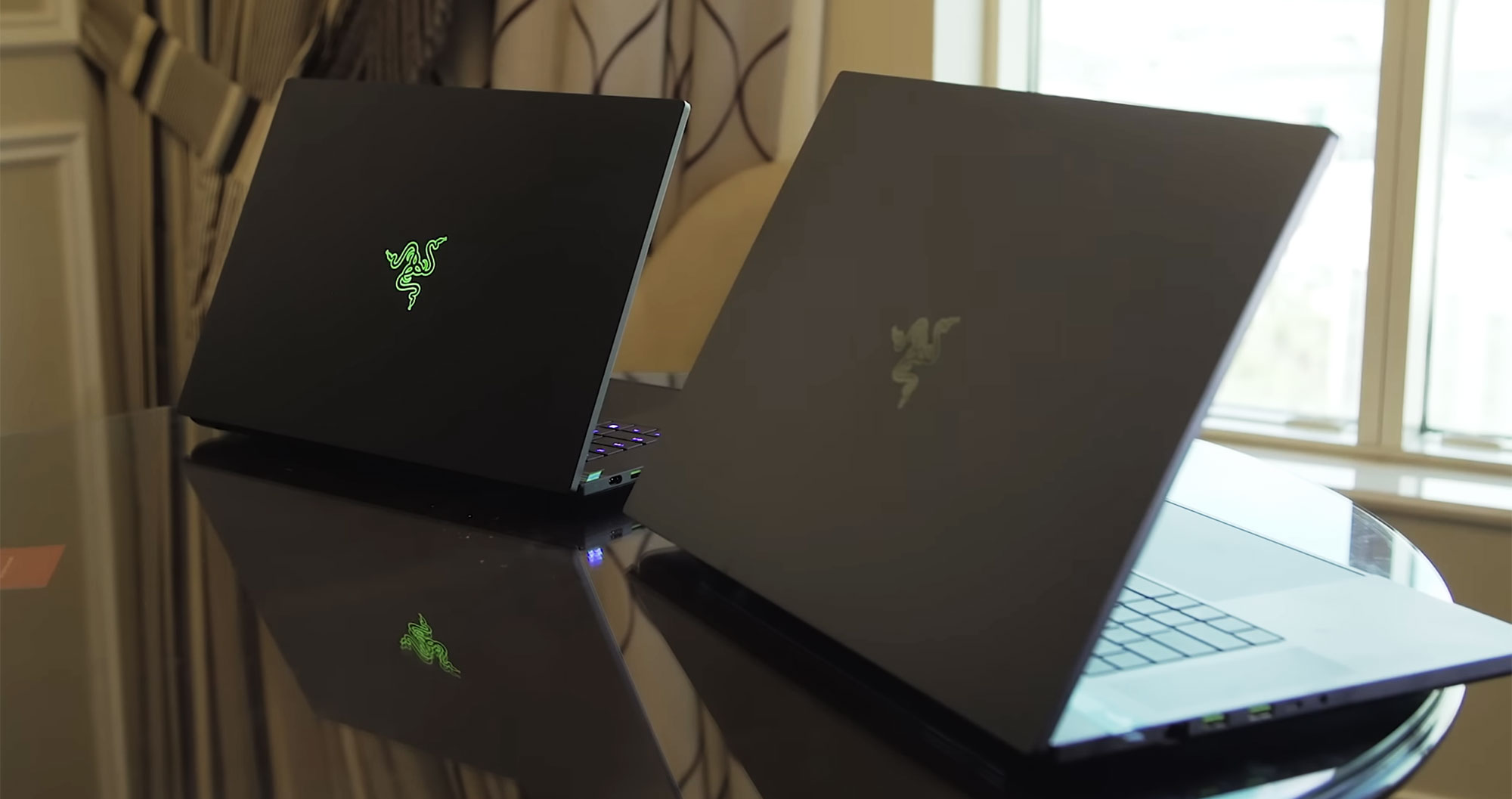 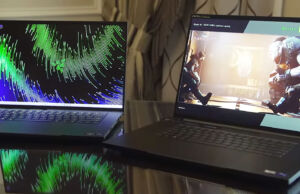 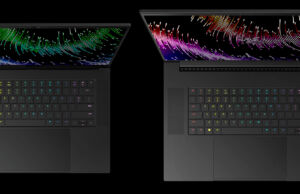 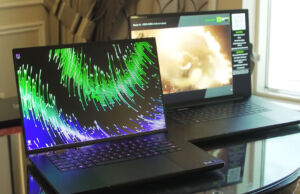 The Razer Blade 16 is the mainstream mid-sized 2023 model.

The premium feel and build quality of the chassis CNC-milled from a single block of aluminum hasn’t changed, and nor have the looks of the black anodized matte finishing. This is supposed to resist scratches and fend-off smudges better than other dark metals, but I would adjust my expectations realistically, based on our impressions of this finishing on the previous Blade 15 generation.

Speaking of, the 2023 Razer Blade 16 is still compact for a 16-inch laptop, only a little deeper in footprint than the Blade 15 2022, but at the same time noticeably thicker and heavier. The video down below, from Engadget, briefly illustrates the two generations side by side.

At 22+ mm and 2.5 kilos now, this is no longer a thin-and-light performance laptop, but rather a premium full-size computer, about the same weight as an Alienware m16 or Alienware x16, an Asus ROG Scar 16, or an MSI Raider GE68, but still more compact than those. Furthermore, this is still smaller by a few mm and lighter than the 2023 update of the Lenovo Legion Pro 7 16-incher.

Will this increase in thickness and weight deter previous Blade buyers towards a lighter option?

Perhaps, but at the same time, it’s important to acknowledge that the 2023 Blade 16 offers a larger 16-inch display now and is significantly more powerful than the previous generations, and this important aspect will attract other segments of buyers that previously dismissed the Blades due to their only mid-power hardware implementations.

The bezels around the display are tiny on this laptop, smaller than on most other 16-inch laptops out there. As for the offered panels, there are two to choose between, both with a matte finish:

The latter is most likely reserved for the 4090 versions of this laptop, and is somewhat similar to the dual-spec panel previously experienced on the 2022 ROG Zephyrus Duo 16, as it allows choosing between two modes: full 4K resolution for daily use and creator work, or FHD+ resolution with 240Hz refresh times for gaming. The software maps 4 pixels into 1 in this mode, eliminating the fuzziness that you’d normally have to accept when using regular panels at lower than default resolution.

This is, however, a mini LED panel, with 1000 nits of max HDR brightness (but 600-nits SDR) and better contrast than on the regular IPS panels. The exact amount of dimming zones is still unclear at this point, as well as whether Razer offer a multi-zone and single-zone backlighting setting, which would make a difference when using the laptop for any sort of creative color-accurate work.

As far as the specs go, the 2023 Blade 16 can be configured up to an Intel Core i9-13950HX processor, one of the fastest mobile CPUs in the 2023 Intel 13th-gen Raptor Lake platform. It’s a hybrid design with 8PCores and 16 ECores, 32 combined Treads, and up to 5.5 GHz Turbo speeds. This runs at significantly higher sustained power than on the previous Blade 15 implementation – exact details were not yet provided, but I’d reckon a sustained TDP of around 100W.

On the GPU side, this goes up to an Nvidia RTX 4090 dGPU running at up to 175W TGP with Dynamic Boost. In comparison, the 2023 Blade 15 implements up to an RTX 3080Ti 120W, hence the power difference between generations is massive and should translate into significant performance gains. Details on the crossload CPU + GPU power settings are not yet available, but we’ll discover them in our future reviews.

The other specs include support for up to 64 GB DDR5 memory (with 2x DIMMs), 4 TB of SSD storage (with 2x gen4 M.2 2280 slots) and a 95Wh battery, an update of the 80Wh battery in the previous Blade. I will mention that dual-stacked SSDs are compatible with this Blade generation, while the previous one used a stacked SSD layout that could only accommodate single-stacked drives. Hence, the Blade 16 supports higher-capacity SSDs.

Of course, a beefy thermal module is required to keep these components at bay. Razer haven’t provided exact details on their internal design, but the cooling module is still dual-fan quad-exhaust with a beefy vapor chamber (and maybe liquid metal? – to be clarified). The image down below further showcases extra intake vents around the back of the D-panel, behind the rubber feet, which were not available with the previous Blade 15.

As for other details on this Blade 16 worth mentioning, here’s a quick summary:

I find it weird that Razer implemented a 1.0 mm keyboard design on this Bklade 16, and I look forward to giving it a try in real use, as I fear this might be an antagonizing feature for such a full-size laptop. And maybe even a deal breaker…

The Razer Blade 18 is the larger and slightly more powerful offer in the 2023 Razer lineup.

Just as in the past, the bigger Blade member is mostly identical in design and functionality to the mid-sized Blade 16. They share the same build and aesthetic lines, almost the same inputs and IO, and are identical in ergonomics.

However, the keyboard is a slightly different implementation with 1.1 mm of stroke depth (still shallow for a full-size laptop, though), and there is an extra LAN port on this model that is not available on the Blade 16.

Those aside, Razer offers a few other extras on this Blade 18, though, such as an updated 5MPx camera with IR at the top of the display, and a 6x audio system, with 2x tweeters flanking the keyboard and 4x woofers on the bottom of the laptop.

The Blade 18 runs on the same Intel HX + RTX 4000 hardware platform that’s also offered on the Blade 16, but with a few differences.

Furthermore, Razer mentions that they are running the i9-13980HX at 120W sustained in the Blade 18, which is higher than the i9-13950HX runs on the 16-inch model. From what we can tell right now, though, there are higher-powered implementations of the i9-13980HX in a few other 17 and 18-inch full-size laptops.

This 18-inch Blade gets a slightly different cooling module, though, with two-fans quad-radiators and a large vapor chamber in the top part of the chassis, but also an extra fan further down, at the battery level. This design carries on from the previous Blade 17 and the extra fan is meant to pull in extra air into the chassis and over the vapor chamber, helping the overall cooling capacity and reducing the perceived temperatures around the keyboard/touchpad areas.

As a result of this third fan, though, the battery on the Blade 18 is a little smaller than on the Blade 16, at 91 Wh capacity. It’s still an upgrade from the 82 Wh battery in the 2022 Blade 17, though. Furthermore, the Blade 18 now comes with the redesigned and more compact 280W and 330W GAN chargers, between the different configurations.

Razer will have Blade 16 in stores in Q1-Q2 2023, starting at $2699. That’s for an RTX 4060 + IPS screen configuration, but we’ll have to update this section once all the specs and configurations are unveiled.

That’s about it on these 2023 Razer Blade updates. I’m intrigued by Razer’s approach for these generations, as they steered away from the thin-and-light segment of performance laptops where past Blades competed in, and moved the 2023 Blades into the realm of full-size laptops, with the increase in size and the implementation of higher power components.

I’m looking forward to finding out how where these new Blades stand in rapport with the established competition in this new space. Look for our reviews in the weeks to come.

Update: Here’s our detailed review of the 2023 Razer Blade 16 series. We’ll follow up with our review of the Blade 18 in due time.

And in the meantime, I’d love to hear your thoughts on these 2023 Razer Blade 16 and Razer Blade 18 models, so get in touch down below in the comments section.