MSI offers a multitude of gaming/performance laptops, and having covered the brand new GS77 Stealth, in this article we’re also going to have a look at the uncompromised full-size 2022 options: the GE Raider and the GP Vector lineups.

Both are full-size computers built on the latest Intel and Nvidia hardware in the more power-capable variants, and both are available as either 15.6-inch or 17.3-inch models.

However, while the GP Vector series (previously known as the GP Leopard) is designed with price in mind and thus offers FHD screens only, and a smaller battery alongside those powerful specs, the GE Raider series is the premium and more expensive option. As a result, it’s mostly built out of metal, comes with a 99.9 Wh battery, better audio, and multiple screen options, as well as higher-tier components.

Here’s a quick specs sheet of the 2022 GE Raider series, and we’ll further go over the GP Vector mainstream lineup down below.

The 2022 GE76 and GE66 Raider are only hardware and software refreshes of the 2021 models, so nothing has changed in terms of design, ergonomics, inputs, and screen options from the previous generations. Hence, you should go over our reviews of the GE66 and GE76 for our impressions on the various aspects of interest.

Both the 15 and the 17-inch series are now built on Intel Alder Lake hardware, with the hybrid design and configurations up to an unlocked and overclockable Core i9-12900HK processor, as well as support for DDR5-4800 memory and PCIe gen4 storage, plus WiFi 6E and 2.5 Gigabit Lan connectivity. These latter technologies were also available on the 2021 models, though.

On the GPU side, both Raiders can be specced up to an Nvidia GeForce RTX 3080Ti 16 GB and there’s a MUX on both sizes, as well as boosted power profiles.

However, the smaller GE66 Raider only supports up to 140W of power on the dGPU (to be confirmed), while the novelty for the GE76 Raider is the ability to run the 3080Ti at up to 175W of power with Dynamic Boost 2.0, and a total of 220W of combined CPU+ GPU power. Both settings outmatch what the vast majority of the competition offer, yet options such as the Lenovo Legion 7i or the Asus ROG Scar 17 SE come close. All these are possible while the laptop is plugged in, running on a single 330W charger for the 3080Ti configuration.

The 3070Ti models can also run at up to 140W TGP and 195W CPU+GPU combined power. These come with a slightly smaller 280W charger. 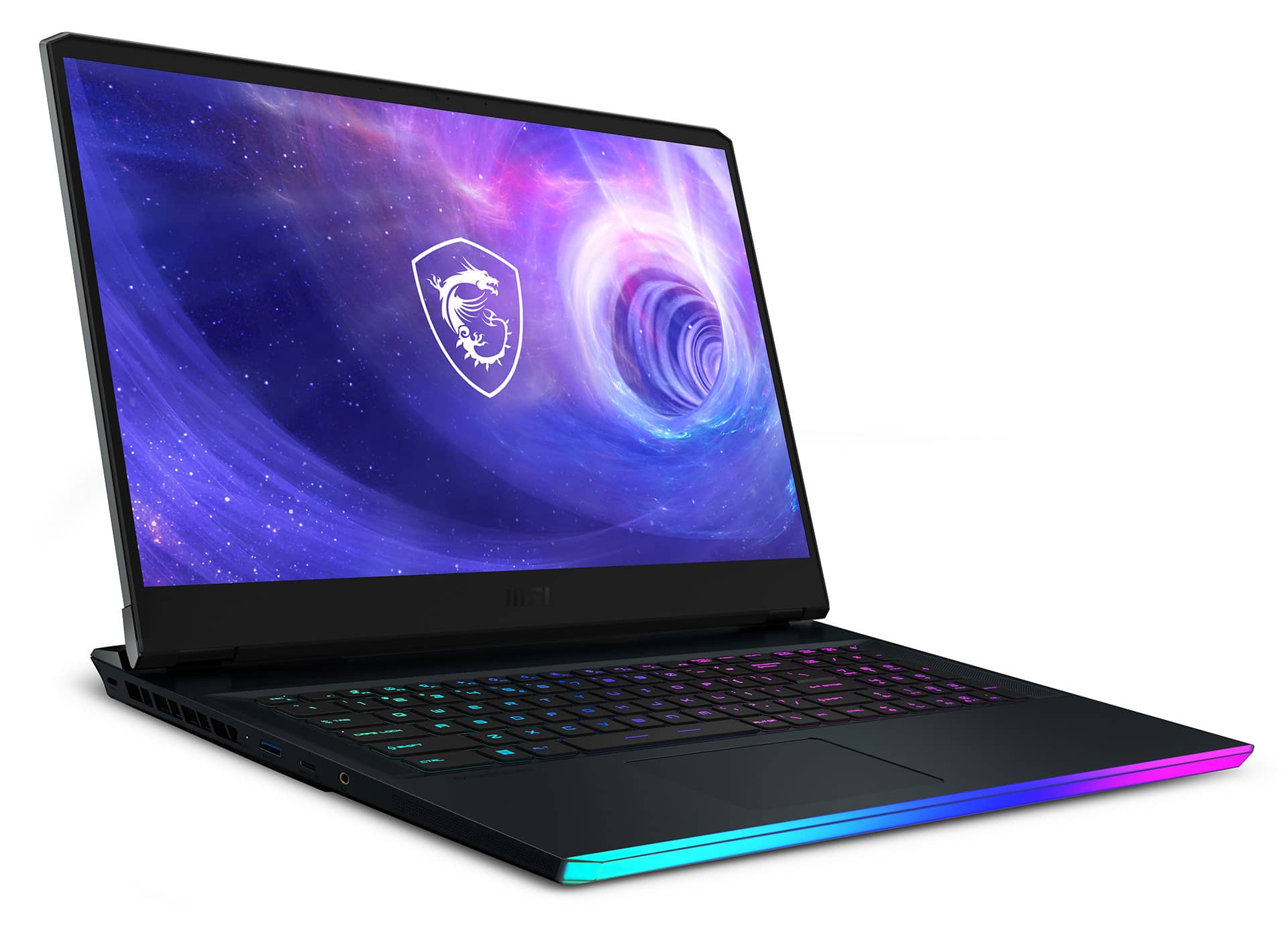 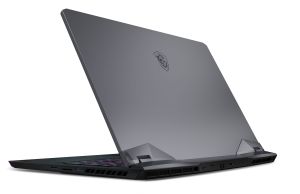 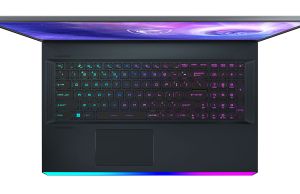 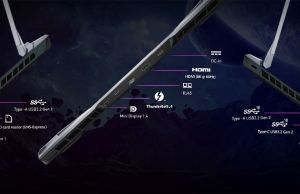 One other aspect to mention here is the fact that MSI implemented what they call the “Phase Change Liquid Metal Pad” technology on their 2022 GE lineups. This means that a liquid metal compound is used on the Core i9 CPU configurations instead of regular thermal paste, allowing for higher clocks within the same thermal limits. Other OEMs have been using liquid-metal on their CPUs in the past, but the novelty here is that this compound is capable of transitioning between a solid form (when the laptop is off or the CPU runs at low temperatures) and a liquid form (in high loads), thus preventing any metal leaks that might otherwise happen when traveling, based on MSI’s pitch.

We’ll have to test the impact of this technology in real use in our reviews, but I’d expect this update to be one of the reasons MSI were able to push the GPU higher than on the previous generation on the GE76 Raider 12UHS.

As for the software updates, the 2022 Raiders are running on Windows 11 and get a handful of tweaks in the MSI Center control app, such as an Auto profile and an updated Silent mode capable of dynamically adjusting the performance/fan speeds based on the ambient noise levels.

All in all, the 2022 GE Raider models promise updated performance over the 2021 models, while otherwise identical in every way. I’m looking forward to further test these gains offered by the Alder Lake processors, DDR5 memory and higher-power RTX graphics.

As far as availability goes, you’ll find the updated Raiders in stores around February, starting at 2500-3000 USD/EUR for the 14Core and RTX 3070Ti configurations, while the top-tier i9s+RTX 3080 models will be listed at closer to 4000 USD/EUR MSRP.

The GP Vectors are the alternatives to potentially consider if you’re after performance levels close to what’s offered by the GE Raiders, but in a more affordable package.

At a first sight, these Vectors might appear like simpler variations of the Raiders, with a cleaner black design and no RGB. However, once you start looking into the details, you’ll realize that you are compromising a fair bit with this series compared to the Raiders, starting with the , still a metal construction, or the fact that you can only get the Vector GP models with a FHD 360Hz 100% sRGB display on most configurations, and a QHD 240Hz 100% DCI-P3 option on only very few of the higher-tier configurations.

You’re also cutting some corners on the IO side, with this series dropping the support for Thunderbolt 4 and USB-C charging, as well as the fast SD card reader. The audio quality takes a slight hit as well, with just a set of stereo speakers on both the 17 or the 15-inch models, instead of the 4x speakers available with the GE76 Raider. The camera is also replaced with an HD module, instead of the FHD from the Raiders. 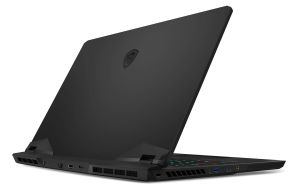 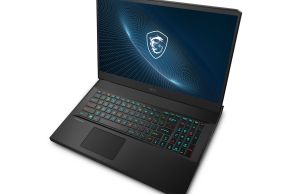 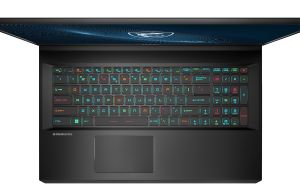 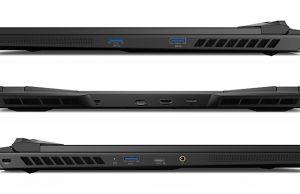 At the same time, with the different design and a smaller battery inside, the GP Vector models are lighter than the Raiders, despite the two series being otherwise nearly identical in size and format.

And then we get to the specs.

I’m still looking to fill up some of the blanks, but there are several important differences between the Vector and Raider 2022 lineups: there’s only DDR4-3200 memory on the Vectors and no DDR5 support, there are no RTX 3080Ti configurations available for the Vectors, there’s no liquid metal compound used for the i9 CPU, the combined CPU+GPU power settings are slightly lower on the Vector series, and there’s only a 65 Wh battery inside.

As a result, if you’re looking for the best specs and you’re willing to pay the price, the MSI GE76 Raider is the one to go for, with the GE66 being the more compact and lighter alternative.

Compared to the Raiders, the Vectors are a few hundreds of dollars cheaper specs-for-spec. Sure, you’re sacrificing on all these aspects mentioned earlier, but the overall performance in demanding loads should be close between the two in the mid-specced configurations, where the GP Vectors series seems to make the most sense for potential buyers.

Look for our detailed reviews in the weeks and months to come, and in the meantime, let me know what you think about these updated 2022 MSI GE Raider and GP Vector series of performance/gaming notebooks.