Tiger Lake is Intel’s 11th-gen Core hardware designed for ultrabooks and portable laptops, and their most recent platform at the time of this article, available in stores from Q4-2020. Higher-power Tiger Lake H35 and H45 series have also been released after the initial low-power platform, and we’re covering those in separate articles, this is all about the 12-28W versions of Tiger Lake.

This follows-up on Intel’s Ice Lake 10th-gen platform and is mostly a refinement in terms of CPU design, features, and clock speeds, supplemented by a significant update in iGPU performance, with the inclusion of Intel Iris Xe graphics on most i5 and i7 processors of this generation.

We’ve tested quite a few different laptops based on Intel Tiger Lake hardware so far, and you’ll find all our reviews via this link.

Still, we’re not going to focus on the platform’s overall performance in this article or compare it to AMD’s Ryzen U alternative, that’s something we’re touching on in separate posts (and can also check out in this analysis from dr. Ian Cutress), especially since Tiger Lake implementations vary greatly between products, based on their power settings and thermal solutions. That’s why it’s important to go through detailed reviews that get in-depth on important aspects such as the performance, thermals, and noise, in order to get the best value with these Tiger Lake laptops.

Instead, we’ll quickly touch on what to generally expect from the 11th-gen Intel Tiger Lake platform and compile a detailed list of all the available laptops built on this hardware, split into two sections: sub-14-inch ultrabooks and full-size 15+ inch notebooks.

In a few words, expect Tiger Lake devices to snappily handle everyday use and run efficiently on battery, as the 11th-gen processors run at higher clocks (and thus slightly increased performance) at similar power, as well as require less power for basic chores, compared to the 10th-gen options. Furthermore, they significantly improve on their predecessors in GPU-loads such as light-gaming or video-processing, but don’t expect significant changes in multi-threaded performance, and keep-in-mind the previously mentioned performance variation between different SKUs.

As far as the actual Tiger Lake processors go, there are actually two different kinds, code-named UP3 and UP4. The term UP3 designates what we previously knew as Core U processors, with TDPs between 12 and 28 W. Details below.

We’re mostly looking at quad-core processors based on Willow Cove Cores built on Intel’s refined 10nm SF-SuperFin lithography, and running at up to 4.8 GHz in Single-Core loads, while previous-gen Ice Lake 10th-gen processors ran at up to 4.0 GHz.

These are paired with an updated memory controller, updated media encoders, integrated Thunderbolt 4 and PCIe gen4 on the SOC, and a couple of other technological improvements, but especially Intel’s Iris Xe G7 graphics on the i5s/i7s, which is by far the major step-up for the Tiger lake platform in comparison to Ice Lake. 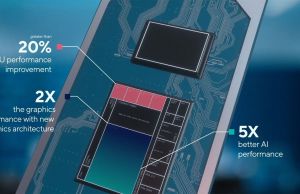 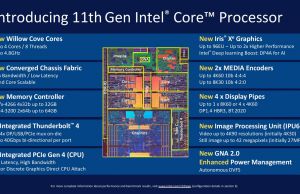 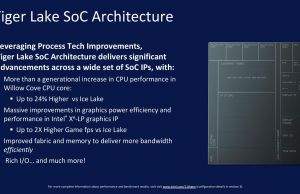 Some of the information presented here and pictures are based on this article.

With these out of the way, UP4 designates what we previously knew as the Core Y processors, with TDPs between 7 and 15 W. Details below.

The immediate result is that there’s no more U and Y distinct branding for the Tiger Lake platform, and that’s going to generate further confusion, especially paired with the fact that each OEM can implement the processors at various TDPs within the allowed limits.

Generally, expect the UP4 Class processors to be implemented in the lightest and thinnest devices, such as the Lenovo ThinkPad X1 Nano. Hopefully, some of these might also get fanless cooling, and we plan to further cover these UP4 SoCs in future articles here on the site once they’re available and we get to test them.

However, most Tiger Lake laptops that you’ll find in stores run on the Class UP3 Intel i7-1165G7 and i5-1135G7 processors, both quad-core CPUs with Intel Iris Xe G7 graphics. The Core i7-1165G7 runs at slightly faster clocks and includes a more powerful iGPU with 96 Execution Units, but based on what we’ve seen so far, it’s primarily an option I’d recommend on designs with adequate power-profiles and thermal solutions. At the same time, the i7 will most likely throttle with combined loads based on our experience in the thinner or the more basic models, that’s why the i5 is the better value here, even if it runs at lower cocks and integrates the more basic Iris Xe iGPU with 80 EUs.

As for the Core i3 available in the more affordable units, that’s only a dual-core processor with previous-gen Intel UHD G4 graphics. Based on our tests, it’s fine for basic use when paired with at least 8 GB of RAM and SSD storage, but the i5 is the more solid choice and worth paying extra if you can squeeze it within your budget. A quad-core i3 is also available, but still with previous-gen G4 graphics.

Finally, the Core i7-1185G7 sits at the top of the list as the highest-tier Tiger Lake processor currently available, but so far we’ve only seen it on an Intel platform-showcase and hardly on any real retail products. When available, expect this to be primarily implemented in larger laptops with beefier cooling, able to sustain that maximum power envelope of roughly 28W in sustained loads.

With these out of the way, let’s get to those detailed lists of available Tiger Lake laptops. We’ve split the reminding of this article into two sections: portable thin-and-light models with 14-inch or smaller screens, and full-size laptops with 15+ inch screens. You can find more about each product by following the links to our detailed articles and reviews on each unit’s name, as well as check out the latest configurations and prices at the time you’re reading this article by clicking on the links in the Price section. Furthermore, if you’re interested in the more succinct selection of premium Tiger Lake laptops that earn the Evo certification, we’ve discussed those in this separate article.

We’re constantly updating these lists, but if you spot anything that should be in here and is not, please tell us about it in the comments section at the end of the article.

And here’s the second part that includes full-size 15 and 17-inch laptops.

Given how the Tiger Lake platform is greatly dependent on the thermal module and can be implemented in a couple of different power envelopes, there’s a good chance most of these full-size devices will outperform the more compact options in demanding loads and games, especially in the more premium designs.

There’s no way to tell without going through reviews for each of the models than end-up on your shopping list, though, and we’ve linked our more detailed articles where available.

We’re constantly updating this list of Intel 11th-gen Tiger Lake laptops and adding up new launches. Nonetheless, we’re a small team and there’s still a fair chance we’re going to miss some, so if you spot any device that should be in here and is not, please get in touch in the comments section down below so we can add it in.

With that kind mind, that wraps up this list of Tiger Lake ultrabooks and notebooks. Hopefully, this has helped you narrow down your options, and don’t forget that more details are available in our detailed reviews and buying guides.

Disclaimer: Our content is reader-supported. If you buy through some of the links on our site, we may earn a commission. Learn more.
Andrei Girbea, Editor-in-Chief. I've been covering mobile computers since the 2000s and you'll mostly find reviews and thorough guides written by me here on the site.
← Previous Story The best birthday gift I’ve ever received (MightyBliss massager review)
Next Story → So, I finally switched to Mac…