12th gen Intel Alder Lake desktop hardware was launched in 2021, and then quickly followed by the 12th-gen laptop and ultrabook mobile platform as well.

The Alder Lake mobile platform was officially unveiled at CES 2022, and in the meantime, we’ve reviewed various designs and products, so we know what to generally expect from Alder Lake laptop chips.

I’m going to take you through what we know so far, and add in my own thoughts, to help you decide whether you should get an Alder Lake laptop at this point, or rather wait for the next-iteration of Intel 13th-gen Rocket Lake products to be available in stores somewhere next year.

Unlike with Tiger Lake and previous mobile platforms, Alder Lake is Intel’s first take of a Big.Little platform, an approach common in recent years for smartphones and tablets, as well as something implemented on recent Apple products built on Apple M1/M2 silicon.

In simple words, Big.Little means that bigger and higher performance cores are paired with smaller and more efficient cores in a single processor. The Big cores are meant to fire when demanding loads require increased processing power, and rest dormant otherwise. At the same time, the Little cores are active all the time and either in charge of efficiently running everyday demands, or helping out the Big cores with the taxing chores, based on the requirement.

In theory, this approach would primarily address efficiency, one of the known issues of the recent Intel platforms in comparison to the AMD Ryzen options, while also helping out the overall performance is sustained loads.

IPC per-core performance was never a problem for the 11th gen Tiger Lake chips over Ryzen 5000 platforms, but because of the increased power demands, Intel were only able to squeeze in fewer cores than AMD could within a given power envelope on their processors, and thus Tiger Lake Core U CPUs only topped at 4C/8T SKUs, and were trumped as a result in multi-thread performance by the up to 8C/16T AMD SKUs.

With Alder Lake, Intel still went with a limited number of Big Cores, but supplemented them with clusters of Small cores on each SKU.

Intel haven’t officially revealed their roster of mobile Alder Lake CPUs at this time, but we do know there’s an entire stack in preparation:

Here’s a more detailed look at the leaked roadmap: 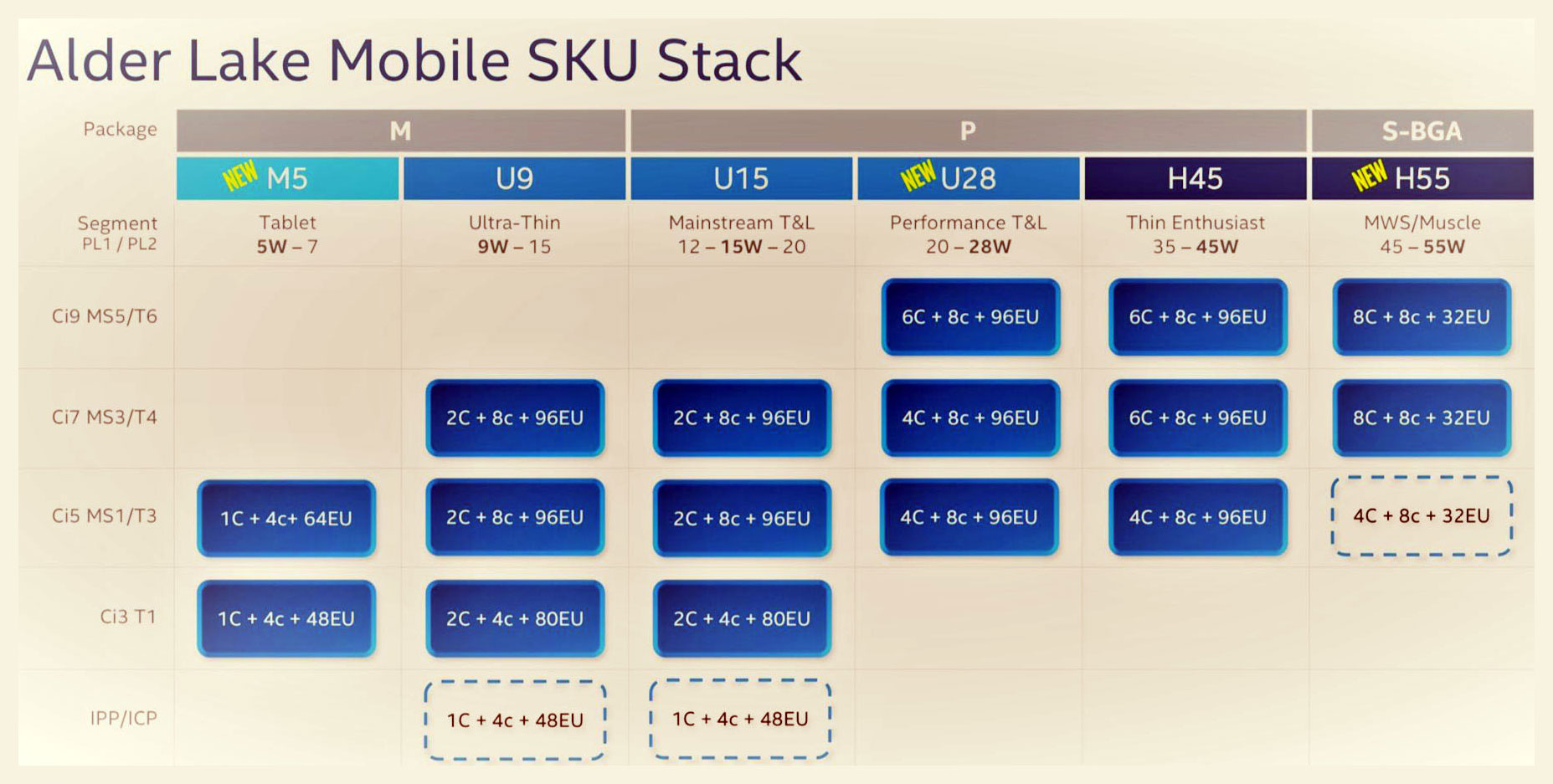 Down below I also put up a short summary of the mainstream Alder Lake-P H45 options based on what we know so far from various sources. Take them with a lump of salt, as some of the info is based on rumors and leaks. The Big cores are marked as P (Performance) and the Little cores are marked as E (Efficiency).

As far as the Core U class of Alder Lake processors go, expect multiple options in the U28 subfamily meant for performance ultrabooks ranging between a Core i5-1240P (4C + 8c, 12 MB cache) and up to a Core i7-1280P (6C+8c, 24 MB cache). Also expect a multitude of CPU options in the U15 lineup of mainstream chips, ranging between 2C+4c and 2C+8c (i7-1255U) designs, as showcased in the roadmap mentioned earlier.

Let’s quickly dive into the P and E Cores that form this hybrid design.

The P-Performance cores are based on Intel’s Golden Cove architecture, a follow-up of the Willow Cove cores in the Tiger Lake processors. This is the first significantly-improved Intel microarchitecture in quite a few years, as very well explained in this article at Anandtech, and results in a combined 19% IPC increase over Cypress Cove as per Intel’s claims (not compared to Willow Cove -Tiger Lake, though), based on measurements in several workloads and benchmarks such as SPECviewperf, PCMark, WebXPRT or Geekbench.

The E-Efficiency cores are based on the Intel Gracemont architecture, a follow-up of Tremont and Goldmont that were at the basis of Intel Atom processors of the past. They’re quite an upgrade in performance over previous Atoms, though, as shown in this video. What’s important here is the performance per surface, as a cluster of 4 E-Cores is about 90% of the size of a P-Core, but offers roughly 120-130% of the performance of a P-Core in sustained loads, as per the mentioned video. 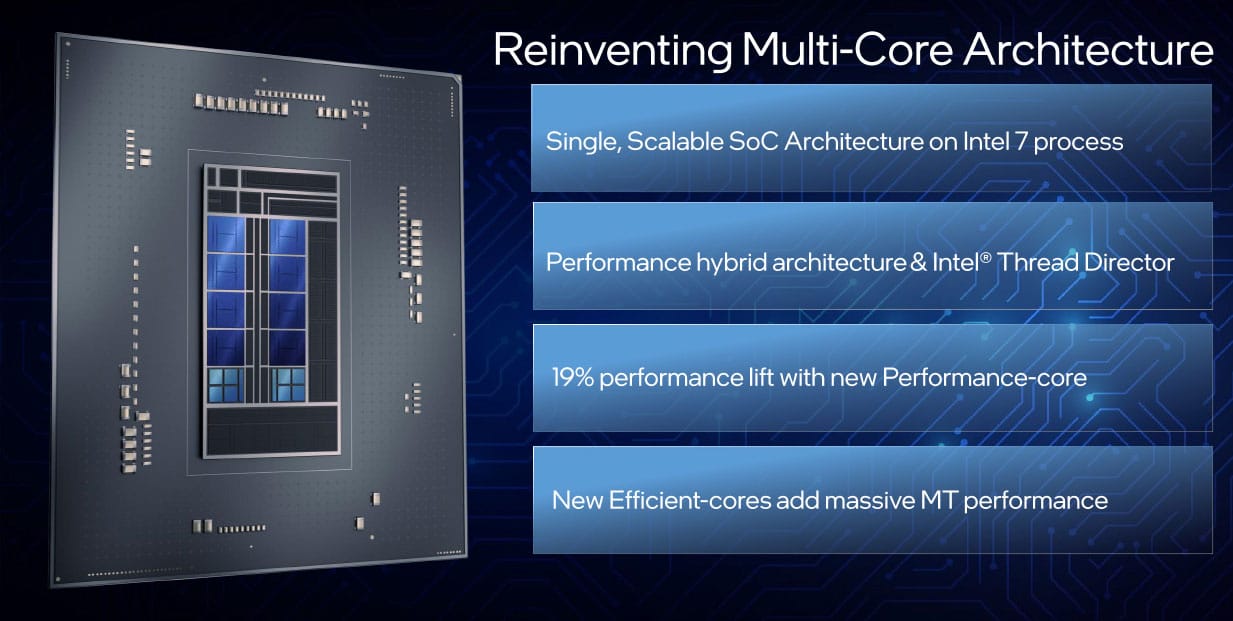 As a result, in an overly simplified explanation, with Alder Lake processors Intel replaced 2 Big P cores with two clusters of Little E cores compared to the TigerLake SKUs. That means the i7-12700H is now a 6Pc + 8Ec processor, with a total of 20 threads, compared to the i7-11800H which was an 8C/16T processor.

The E cores allow for efficient and low-temperature use on battery, with the laptops unplugged, but also make up for more than the performance of a replaced P core in demanding loads. Hence, paired with the improvements in IPC and various other design updates, Alder Lake processors should provide a significant increase in high single/multi-core performance over the Tiger Lake chips, alongside the more obvious improvements in energy drain with everyday chores.

And here we get to touch a little bit on the expected performance, based on a few rumors and what we already know from the PC Alder Lake parts, which are already available and have been reviewed by multiple trusted sources. But first, a few more details and the Alder Lake-P mobile hardware:

Performance with daily use and demanding loads

With the increase in IPC and extra processing power, we can generally expect Alder Lale laptops to feel very snappy with everyday use and multitasking, while also running significantly more efficiently. However, I doubt you’ll be able to notice a performance difference with general use over the previous 2019-2020 hardware generations, though.

The efficiency part should translate in significantly longer runtimes on battery, though, as well as cooler/quieter runs while plugged in, so hopefully, silent passive cooling with daily use would become the norm on more and more 2022 laptops.

However, all these will depend on the software’s ability to schedule and optimize workflows between the P and E cores, and that’s probably easier said than done. Alder Lake laptops will ship with Windows 11, and we’ll just have to wait and see how the scheduler does. I’d expect a bumpy road at first, and perhaps smoother later on with software patches. Look for our reviews for updates.

With demanding loads, early rumors suggest a significant performance boost in CPU multi-threaded tests, but I would take the early Geekbench leaks with reserved enthusiasm. We’ve seen an i9-12900HK leak scoring 1851 – Single Core and 13256 – Multi Core in a potential MSI GE76 Raider update. In comparison, the current i9-11980HK GE76 Raider scores up to 1650 – SC and 10000 – MC (source), so we could be looking at 15% higher single-core and 30% higher multi-core results. That would be impressive indeed, but I’m skeptical about that MC score. For what is worth, the previous i9-10980HK only scored 1250-SC and 7500-MC in the same Geekbench test in our review, so Alder Lake looks like a major update over the Comet Lake-H hardware generation from 2020.

Of course, we could look for more answers into the already available reviews of the desktop K chips, but keep in mind that Alder Lake K hardware runs at much higher power in sustained loads, and the K chips also offer extra P Cores over the mobile H parts. Thus, expect lower performance on the H SKUs, as well a wide variation between the different implementations, based on the allowed power settings. That GE76 Raider mentioned above is a full-size laptop with one of the most permissive power settings you will find in a notebook (at 100+ W sustained), so even if we’re to believe those numbers, they would be best-case expectations for the i9-12900HK.

Look forward to our updates and reviews for more performance details.

With notebooks rarely being CPU bottlenecked in games, unless you’re playing fast-paced titles at very low graphics settings in order to get 300+ framerates (such as CS:GO, Fornite, etc), I’d expect the impact of Alder Lake hardware in games to be even smaller than in sustained workloads and CPU benchmarks.

However, the combination of potentially higher sustained clocks and the extra bandwidth provided by the transition to DDR5 memory might benefit some games in a measurable and noticeable way. Our reviews will go over gaming tests in detail, and for now, I’ll just leave you with the video down below that goes over the gaming performance of the main-stream Core i5-12600K desktop chip. These results are especially interesting because the desktop i5 is a 6Pc+8Ec architecture, similar to what we’ll get with the mobile Core i7 and i9 options.

From what we know so far, I expect Intel Alder Lake hardware to be a competitive option in 2022, and possibly a first pick over the AMD options in certain scenarios. Tiger Lake had an edge over the AMD Ryzen 5000 Cezanne platforms in IPC and gaming, and was able to trade-blows in multi-threaded performance, but with higher power demands and lower efficiency.

With Alder Lake, the IPC difference increases, and the efficiency in daily chores should improve, but I’m not sure what to expect in terms of power draw and efficiency with demanding loads, and there’s also the question of how the software will be able to keep up with the hardware design.

Of course, AMD Ryzen 6000 Rembrandt is also coming on mobile computers next year, and that’s what Intel will have to take on with their Alder Lake hardware. However, given how Ryzen 6000 is a Zen3+ architecture, thus a refinement of their previous Zen3 Ryzen 5000, I’d expect Intel to have a slight edge, especially in the higher-performance products with dGPUs, where the integrated graphics won’t matter much. We’ll see.

AMD Zen4 is also coming later in 2022, but so does the Intel 13th gen Raptor Lake. However, for most of 2022, your mobile CPU choices will go between Intel Tiger Lake and AMD Rembrandt platforms. Look for our updates and reviews for more details.

Finally, check out the following articles for a deeper research on available 2022-generation laptops built on the latest mobile platforms: our guide on the best portable gaming laptops, our list of Intel Core i9-12900HK/H laptops, and our list of AMD Ryzen 9 6900HX options. This article also offers an in-depth analysis of the Intel i9-12900H and the AMD R9 6900HS platforms, in similar designs.