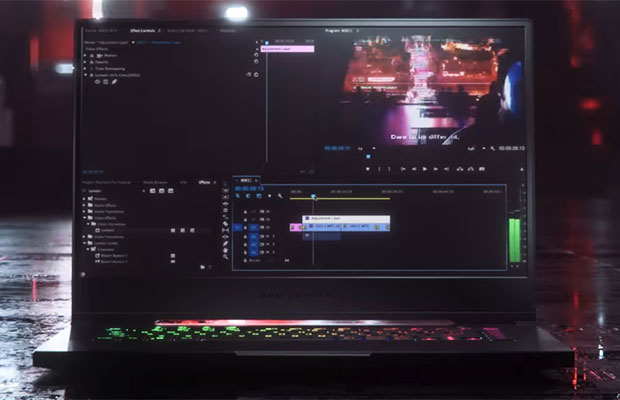 For the last few years, the ROG Zephyrus has been Asus’s top-tier line of thin and light gaming laptops.

While in the beginning there was a single ROG Zephyrus series, the GX501, later on, Asus added the Zephyrus M (GM501), a slightly larger variant with a full-performance GPU, and the Zephyrus S (GX531), with the S coming from Slim, a thinner option with Nvidia Max-Q graphics.

Quick forward to mid-2019, Asus introduced three new Zephyrus subseries: the updated Zephyrus S GX502, the updated Zephyrus M GU502, and the brand-new Zephyrus G GA502. At this point, everything gets highly confusing, that’s why in this article we’ll explain the main similarities and differences between these models, as well as how they relate to the previous Zephyrus S variants launched at the beginning of the year (GX531 and GX701), which are still part of the lineup.

In a few words, all the ROG Zephyrus models are compact and light ultraportable laptops with metallic builds, backlit chiclet keyboards, high-refresh rate screens, and powerful hardware specs. They’re also all standard clamshell laptops, unlike some of the previous Zephyrus models, which used an inverted design with the keyboard downshifted to the bottom of the chassis, in order to leave the top for the hardware and thermal implementation.

So what are the differences, then? We’ll get to that in a second, but first, here’s a specs sheet of the three line ups, as well as the early-2019 Zephyrus S GX531, which will shed light over their particularities. 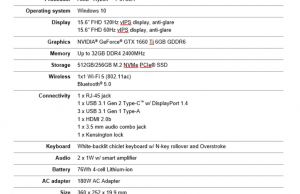 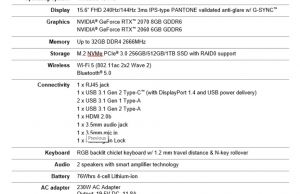 Update: Our detailed review of the Zephyrus GX502 GW with RTX 2070 graphics is available over here.

Both are full-performance implementations of each Turing chip, and that’s rather unexpected, given the fact that the GX502 is now a standard clamshell design, with a proper arm-rest and the hardware tucked beneath the keyboard, so doesn’t benefit from the thermally-favored design of the Zephyrus S GX531.

I really am looking forward to seeing how that RTX 2070 115 W chip performs inside such a slim envelope, as this is normally something we’re used to seeing in thicker devices, like in the previously reviewed ROG Scar, for instance. Asus’s official swear by its performance, but I’m waiting for the review unit for confirmation.

The Zephyrus S GX502 still gets a mechanical raiser on the underside (the AAS – Active Aerodynamic System), which lifts up the laptop and allows extra space to suck fresh-air from, and more details on the thermal implementation are available on Asus’s website and in the clip below.

Hardware wise, this updated Zephyrus S also gets up to 32 GB of RAM (2x DIMMs), dual M.2 SSD storage with RAID0 support and a larger 76 Wh battery, which mostly brings it in line with the competition. The GX502 also gets an updated screen, with an IPS panel and refresh rates of up to 240 Hz, with GSync support. A MUX switch and BIOS option for switching between Optimus and GSync are enabled here, like on the Zephyrus S GX701.

The GX502 is also smaller and a bit lighter than the previous Zephyrus S GX531 model, but also a little thicker, at 18.9 mm. The design and aesthetics haven’t changed much, though, as aluminum and magnesium are still used for the chassis and outer shell, with structural reinforcements meant to improve the overall rigidity. The interior is, however, made from a magnesium alloy, and feels but sturdy and reliable to the hands, while repelling fingerprints much easier than the aluminum finishes on the previous Zephyrus models.

The redesign still hasn’t ditched the backlit power button, the annoyingly placed status LEDs and the lit ROG logo on the lid-cover, and also pushed the speakers to the bottom of the laptop, but hopefully, that’s a welcomed upgrade of the poor front-facing ones placed beneath the screen on the GX531.

You’ll also notice that the updated version no longer gets a webcam at the top of the screen, and I’d expect an external one to be included in the pack, like with the GX701. On top of that, Asus didn’t add any sort of biometric login options on this generation, but I’ve been told they’re working on integrating a finger-sensor in the next-gen variants. 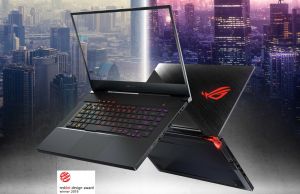 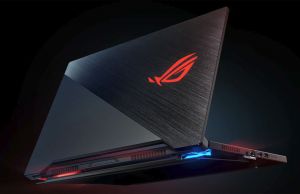 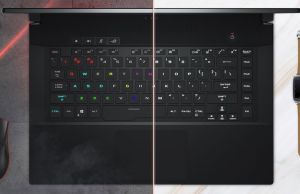 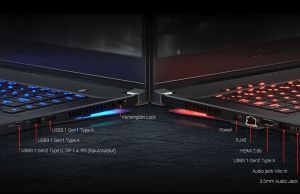 The IO hasn’t changed much either, as there’s still no support for Thunderbolt 3 or a card reader, but the sides do lineup several USB-A and one USB-C slot with DP and power delivery, as well as a LAN port, as the only new addition. I’ve asked the Asus officials why no Thunderbolt 3, and they replied it’s not a feature most users actually use. Yes, it’s something that some users want and tech journalists are vocal about, and they’re looking into implementing this kind fo technology in the future updates (with PCIe 4 support), but the adoption rate of Thunderbolt eGPUs and other accessories is in fact very limited, so they don’t feel that the lack of TB3 support is a deal-breaker. Do you agree?

Asus also tweaked the keyboard of the Zephyrus S GX502, which now includes an improved layout, per-key illumination, as well as N-trig rollover and Overstroke technology. Based on my limited hands-on experience with the product, the feedback is also firmer than on the GX531, whose keys felt rather shallow and mushy.

All in all, the Zephyrus S GX502 addresses many of my complaints mentioned in the GX531 review, with the updated specs, new form factor, and improved ergonomics, the improved screen with GSync support, improved keyboard and hopefully improved audio quality. It still lacks features offered by the competition, like IR cameras, front-facing speakers or a Thunderbolt 3 port, but for most these are secondary traits, and the changes should make it an interesting buy for those interested in a powerful and well priced ultraportable. On top of that, if proper cooled, that RTX 2070 variant could prove a tough challenge for the RTX 2080 Max-Q options out there, at a significantly lower price, but let’s wait for the review unit before drawing conclusions.

Update: Our detailed review of the Zephyrus GU502 GU with GTX 1660Ti graphics is available over here.

We’ve already covered it in a previous article, so we’re not going to get in-depth here again. In very few words, though, this laptop is identical to the Zephyrus S GX502, with the following differences:

Update: Our detailed review of the Zephyrus G GA502DU with RTX 1660Ti graphics is available over here.

Aesthetically, it’s very much like the other two, with some slight design differences in the area above the keyboard, a slightly thicker profile (20 vs 19 mm), slightly higher weight (2.1 vs 2.0/1.9 kg) and a plastic interior and underside. Metal is still used for the lid-cover, and the overall footprint is identical, with the same small bezels and design particularities.

On the inside, though, the Zephyrus G is fairly different, and for a few different reasons.

For starters, its keyboard gets the same layout as the ones on the M and S models, but there’s no RGB backlighting, just white LEDs beneath each key. Then, you’re not getting 144 or 240 Hz IPS screens with this laptop, but only a 60 or a 120 Hz lower-tier panel called vIPS in the specs-sheet, and you should further look into this matter to find out more about its brightness, contrast, viewing angles and response times. This also gets a more basic 1×1 wireless implementation than the other two.

On top of that, the Zephyrus G GX502 is built on a rather unusual AMD Ryzen 7 3750H hardware platform, supplemented by up to 32 GB of RAM, a single stick of M.2 SSDs storage (or perhaps two, but without RAID support) and Nvidia GTX 1660 Ti graphics.

The Ryzen processor is perhaps the most interesting feature of this laptop, a Picasso SoC built on the 12 nm Zen+ microarchitecture, with 4-cores, 8-threads, a TDP of 35 W and integrated Radeon RX Vega 10 graphics. This is a fairly new CPU in the mobile segment, though, so you’ll have to look into reviews for more details on performance, efficiency, and thermals, as well as its overall value, compared to the existing 6-core 12-thread Coffee Lake options that power most other performance laptops these days. 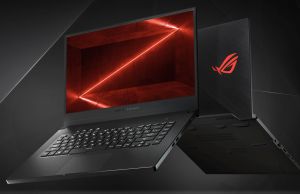 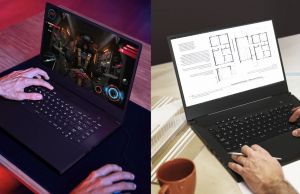 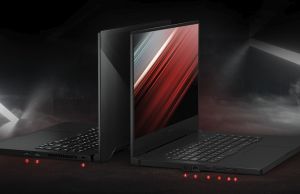 Overall, there’s no doubt you’re giving up a fair-bit when opting for a Zephyrus G over the other options, but for some, the pricing might compensate. This is expected in stores from the end of April, starting at $1099 in the US and 1199 GBP in the UK, making it one of the better-priced ultracompact GTX 1660 Ti laptops on the market.

It’s not the only one though, as you can find from our detailed listing of GTX 1650 and 1660 Ti notebooks, and I’ll have to wait for a proper review unit before drawing any conclusions on its worth.

Disclaimer: Our content is reader-supported. If you buy through some of the links on our site, we may earn a commission. Learn more.
Andrei Girbea, Editor-in-Chief of Ultrabookreview.com. I've been covering mobile computers since the 2000s and you'll mostly find reviews and thorough guides written by me here on the site.
← Previous Story Asus ROG Zephyrus M GU502 (i-9750H, RTX 2060/GTX 1660Ti) – what to expect
Next Story → A deeper look into the 2019 Asus ROG Zephyrus lineup