I was hoping to get a review sample of the 2022 Asus Zenbook Pro 16X OLED UX7602 series before the launch event, but it didn’t arrive in time.

As a result, this article only gathers my initial thoughts and impressions on what I consider to be one of the most interesting all-purpose laptops of the year, and a strong potential competitor for the Dell XPS 15/17 and the Apple MacBook Pro 16 in Asus’s lineup, something they’ve been missing for the last few years. I’ll follow up with a detailed review in the next couple of weeks.

In just a few words, the ZenBook Pro 16X is the most powerful ZenBook to date, a design capable (according to Asus, and something we haven’t yet tested ourselves) of up to 140W of combined CPU+GPU power, in a 16.9 mm thin product, while only ramping to fans to 40 dB.

The thermal design is the special ingredient that makes this kind of hardware power possible in a thin chassis.

Inside, Asus implemented a 3D vapor chamber cooling module with two high-capacity 12v fans, while on the outside, they put on this product the moving AAS keyboard deck mechanism that was first introduced with the Zephyrus S17 last year.

This way, the keyboard deck is separated from the hot components underneath, allowing for more pleasant surface temperatures under load, while the flow of fresh air into the fans happens through intakes placed between the keyboard and the main chassis, and less so through the bottom of the laptop. This way, the intakes are not choked when the laptop sits on the desk, and the internals do not overheat. I am a fan of this design on the Zephyrus S17, and I’m looking forward to testing it on this lineup as well.

Here’s a specs sheet of the Zenbook Pro 16X OLED series, and we’ll follow up on the important details down below.

This series is a unibody design made entirely out of CNC machined pieces of aluminum, so the build quality and durability should meet even the highest expectations.

Visually, it looks a lot like ZenBook 14 Duo reviewed here, with the same dark-gray color scheme and the clean branding lines adopted by most ZenBooks in 2022. As particularities for this model, though, there’s a lit monogram Asus logo on the lid, and some RGB elements in the AAS system, which are hopefully all controllable from the software. 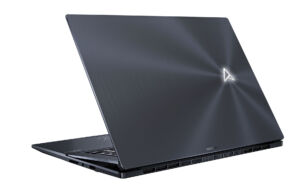 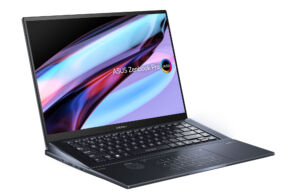 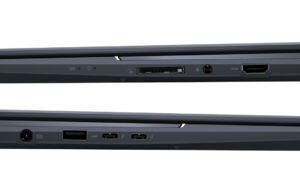 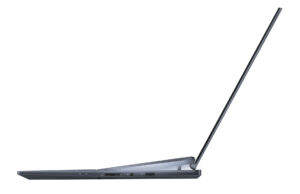 The interior implements a full-keyboard and a large glass touchpad with secondary NumberPad functionality, as well as a physical DialPad, slimmer than the variant previously implemented in the ProArt models. The keyboard offers WRGB backlighting with per-key control, and the touchpad is an immovable surface with haptic feedback, similar to what Apple offer on the MacBooks.

Of course, it comes without saying that the AAS system tilts and inclines the keyboard just like on the Zephyrus S17, allowing for an ergonomic typing position. 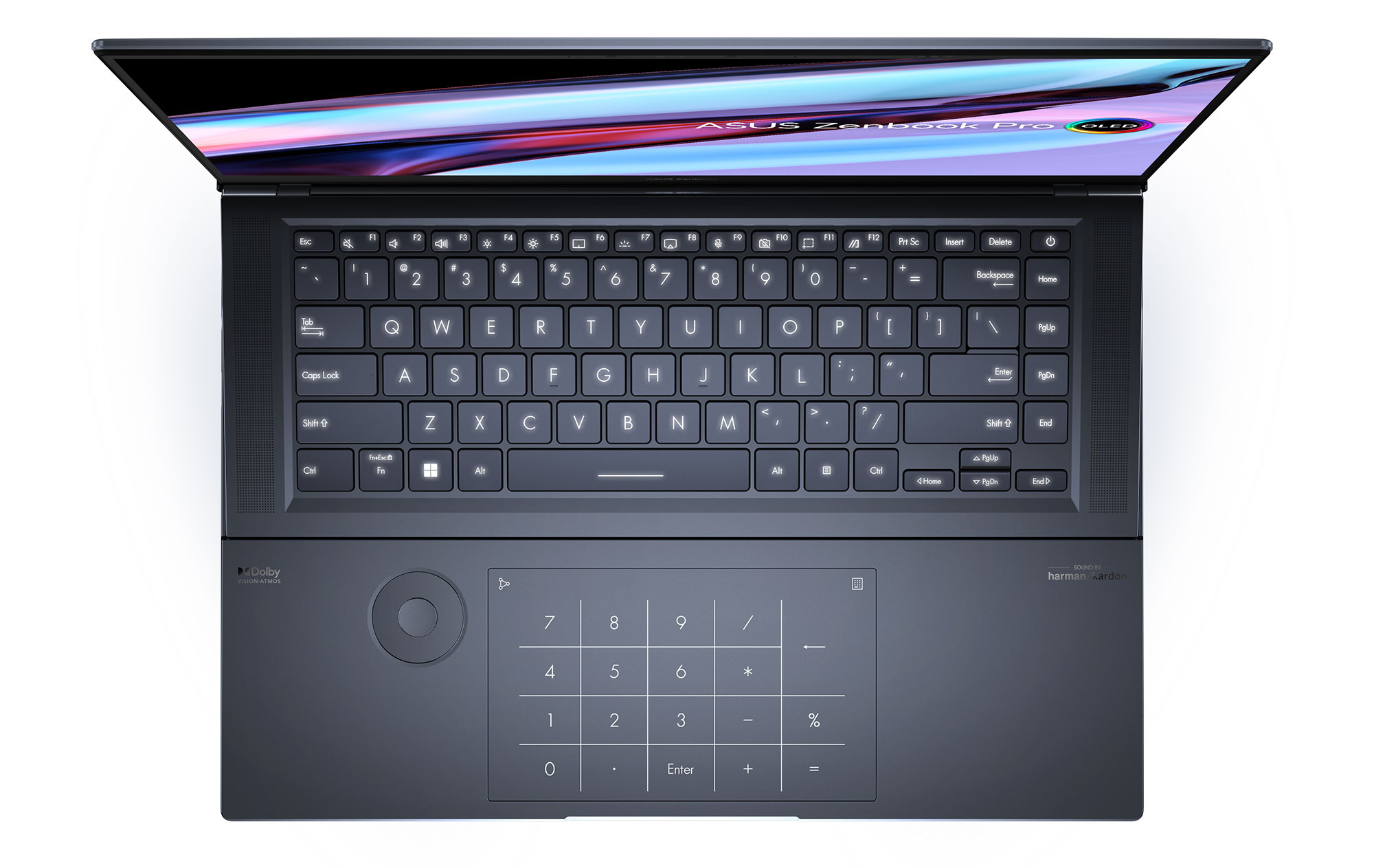 You probably noticed by now that there are some speaker grills flanking the keyboard, and that’s because the ZenBook Pro 16x implements a set of 6 speakers, most likely similar to what Asus offers with the Zephyrus M16/G15, with up-firing tweeters and bottom-firing main woofers. Given our past experience with the Zephyrus models, I expect excellent audio quality here.

That’s paired with most likely pristine image quality, thanks to the implemented 4K OLED display with 100% DCI-P3 color coverage. This is only 60 hz refresh, though, and there’s no other IPS or miniLED panel option for those few not interested in OLEDs.

As far as the IO goes, there’s everything you’ll want here, including USB-C ports with Thunderbolt support, an HDMI 2.1 ports, and a full-size SD card reader. They’re lined on the sides and there are no connectors on the back, and that’s because that is reserved for cooling, with exhaust radiators on the sides and an intake grill in the middle, between the exhausts. As mentioned already, the fans draw most of the fresh air from underneath the keyboard deck, which allows for an unhindered performance with the laptop sitting on the desk. The screen/keyboard physical mechanism is similar to the one implemented in the ZenBook Pro 14 Duo reviewed here, with a wide-open back where cables can tangle through, so you’ll need to be careful about that with the ZenBook Pro 16X.

Here’s a video preview of the ZenBook Pro 16X, from Asus:

All in all, I’m looking further to testing Asus’s claim of 140W of combined power at sub 40 dB noise levels in this product, which no other laptop in this niche can do. The Zephyrus S17, with a similar AAS cooling design, was capable of 150W of combined power on the Performance mode at around 41-42 dB, so there’s hope Asus can deliver on their claims here with the vapor chamber.

Even if they do, at this point, it’s difficult to tell much about the potential performance of this series. The few numbers provided by Asus suggest CPU sustained performance within 10% of the Zephyrus M16 reviewed here, and GPU performance around what is offered by the RTX 3060 configuration of the TUF Dash F15 tested here. Asus made many references to the previous ZenBook UX535 in their presentation, showing massive gains in workloads such as Photoshop, Blender, or 3DSMax, but that’s not really a proper competitor at this level.

For now, though, take my assumptions with a lump of salt, and wait for our final review for more details. In the meantime, I’d love to hear your thoughts on this series and its overall competitiveness in this niche.

Disclaimer: Our content is reader-supported. If you buy through some of the links on our site, we may earn a commission. Learn more.
Andrei Girbea, Editor-in-Chief. I've been covering mobile computers since the 2000s and you'll mostly find reviews and thorough guides written by me here on the site.
← Previous Story The lightest laptop and ultrabook in the world (2022)- complete list
Next Story → Asus ZenBook S 13 OLED UM5302 (2022 UM5302TA – AMD Ryzen 7 6800U)