Asus have been offering the M16 series in stores for the last two years, but the 2023 model is a significant revamp of the previous models, although it might not seem so on a first glance.

That’s because the notable changes are on the inside, where the M16 GU604 series borrows the motherboard design and improves on the thermal module previously implemented in the ROG Flow X16 series. That allows for higher power and higher-tier specs than on the past M16 generations, as well as hopefully cooler temperatures and/or quieter fans in sustained gaming and work sessions.

The 2023 Zephyrus M16 can be configured up to an Intel Core i9-13900H processor and RTX 4090 16GB dGPU running at up to 145W of power, a notable step up from the 120W dGPUs in the past M16 and fairly close to the capabilities of the previous full-size ROG Scar laptops.

At the same time, the 2023 M16 is a little thicker and heavier than the previous models, and requires a higher-capacity charger on the top-specced models, but even so, remains a compact and portable design that you can comfortably grab along in your travels or commutes, especially if you’re willing to opt for a USB charger while on the go.

Down below we’ll go through the notable features and particularities of the 2023 Asus Zephyrus M16 series and compare it to the previous M16 model reviewed here, and we’ll follow up with an in-depth review somewhere in the next few weeks.

The overall design of the 2023 M16 hasn’t changed in any significant way from the previous chassis. The laptop is a similar boxy shape with an aluminum lid and a soft-coated main body made out of magnesium alloys.

However, some sources hint at both a black and silver variant of this M16 generation, while previously only a black model was offered. It sure looked classy and professional, but also smudged very easily and was difficult to keep clean.

That aside, Asus implemented their Anime Matrix array of dots on the lid, which they previously only offered on the Zephyrus G14 series. This is a somewhat interesting geeky feature, but one that adds up to the cost and weight, so not necessarily something I’d personally go for. 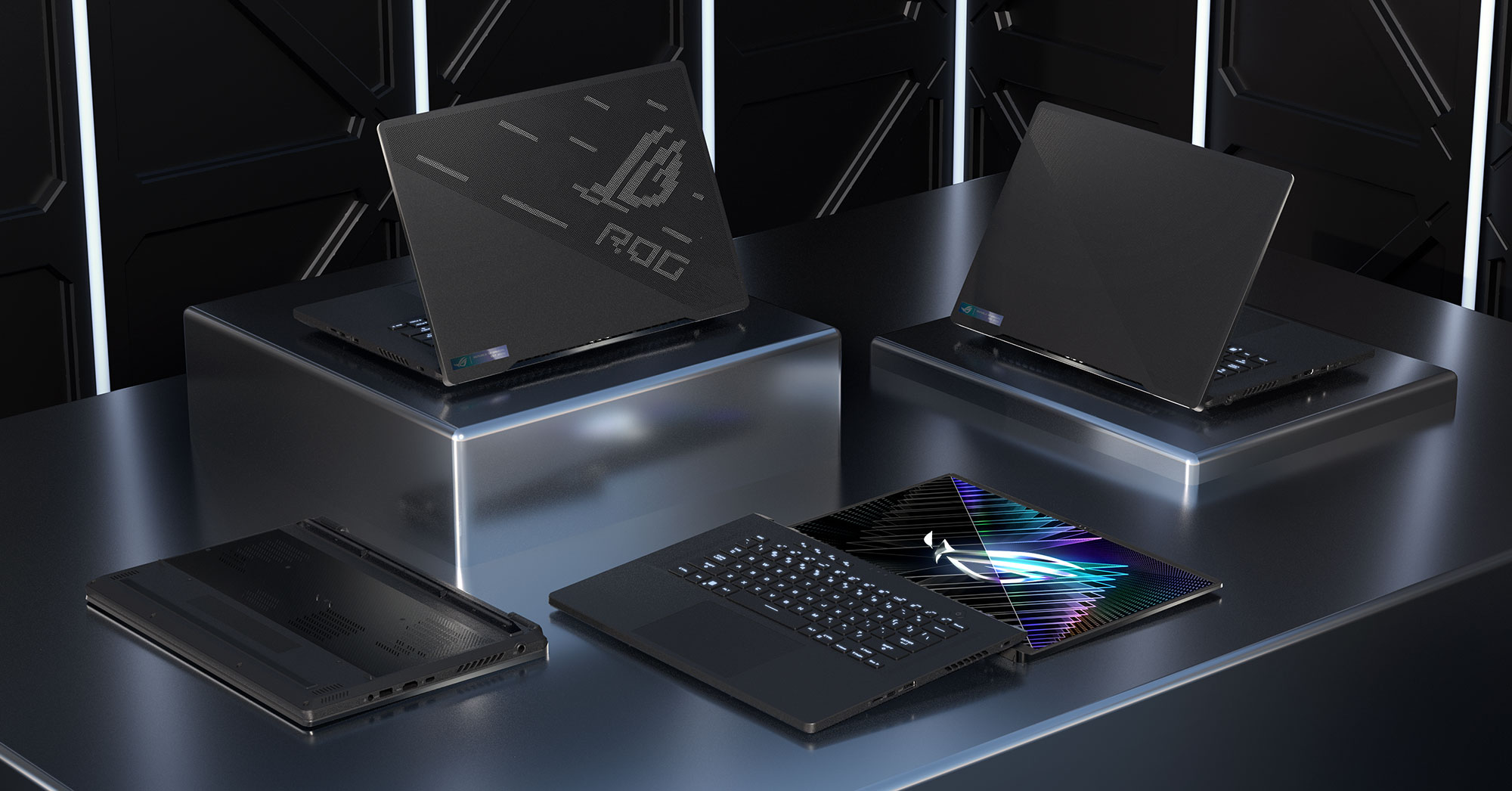 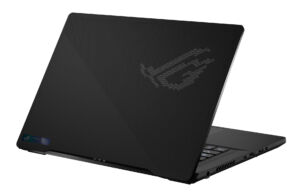 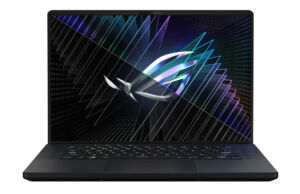 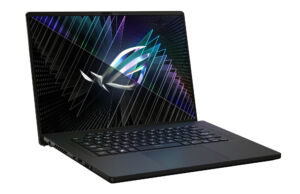 Speaking of, this 2023 ROG Zephyrus M16 is a little thicker and heavier than the previous models, at between 2.1 to 2.3 kilos between the various configurations. The heaviest variant includes fully specced internals, the Anime Matrix array, and the miniLED display option, which seems to be heavier than the standard IPS panels.

As far as these panel choices go, Asus offers a QHD+ IPS panel on most configurations, similar to the one offered on past M16s, as well as a mini LED Nebula HDR panel on the top models, with 1024 dimming zones and up to 1200-nits of peak HDR brightness. We’ve experienced the Nebula HDR panel in the ROG Flow X16, and this generation is a refined iteration, with twice de number of zones that should lead to better HDR performance and improved uniformity at lower brightness settings.

Another notable design change with this updated M16 concerns the IO, which has been slightly rearranged around the edges – there are no extra ports, though.

The PSU is now on the left edge towards the back of the laptop, so the charging cable won’t be in the way as much as on the previous model, and most of the important connectors are centrally positioned on the chassis. There are also USB-C ports on both the left and right edge now, for convenience when connecting peripherals. However, only the left one can be used for charging, from what I understand so far.

The redesigned IO brings a slight update of the intake/output air grills as well, especially around the rear edge of the laptop, but we’ll discuss the cooling module further down.

For now, I’ll just point at that big rubber feet on the underside of the laptop, designed to facilitate proper airflow into the fans. The laptop is also an Ergolift hinge design, which means the main body lifts up on the bottom of the screen to further facilitate airflow under the main chassis. The hinges also allow for the display to lean back flat to 180 degrees, something I greatly appreciate for lap/couch use.

These aside, I’m noticing that the keyboard/touchpad haven’t changed in any significant way, so there’s no per-key RGB control on the keyboard. I’m also seeing the status LEDs still placed just under the screen, so they’re annoying when using the laptop at night. The audio system is still the same as well, with up and bottom firing speakers and solid quality for a portable laptop design – no complaints here.

Finally, the camera seems to have been updated to the newer 2MPx shooter that Asus are offering on most of their ROG notebooks this generation – it’s a little sharper and better than the past 720p shooters, but still not much.

It’s also a higher power design, as a result of implementing an updated cooling module with triple fans, a complex array of heatpipes, and a Pulsar full-length heatsink across the entire rear edge of the laptop. This allows up to 160W of crossload CPU+GPU power and up to 145W of GPU power with Dynamic Boost, a notable increase from the previous generation (140W crossload, 120W GPU).

Looks like RTX 4060 and lower configurations are not available with the M16 series this year, but only with the previous chassis that’s now sold as the Zephyrus G16.

Down below is a rough image of the motherboard design and the cooling module on the 2023 Zephyrus M16 series.

This thermal module is a more advanced iteration of the cooling on the ROG Flow X16, as it gets one extra radiator and an extra heatpipe on the CPU side. The design principles are similar, though, with two main Arc Flow fans and one extra smaller fan in the middle of the chassis, meant to pull in extra fresh air over the components and onto the rear radiator. Liquid metal is applied on the CPU (not sure about the GPU) to further help out in taming these specs inside this sort of compact chassis.

Now, our past experience with the tri-fan Pulsar thermal module in the Flow X16 was more than positive, as the X16 ran cooler and quieter than the previous G15 and M16 generations. Sure, the hardware runs at higher power in this 2023 Zephyrus M16 model, so we’ll have to wait for the reviews before drawing any conclusions on this design. Our review should be available in the next few weeks.

Before we wrap this up, there are a few more things that I must add here.

First off, a larger 280W charger is required in order to cope with the power settings of this M16, but other configurations will still get the compact 240W charger used before.

Furthermore, Asus will offer this series in a multitude of variants, and while the i9 + 4090 is sure going to deliver impressive performance in this format, is also going to be very expensive. Hence, I’m rather looking forward to the mid-specced variants with maybe i9 and RTX 4070 specs, which should be the sweet spot in capabilities for money in this chassis.

The Zephyrus M16 2023 is expected in stores around the end of Q1 2023, so we should know more about the available configurations and their prices in the near future. Stay close for updates and for our reviews.

In the meantime, let me know what you think about this updated Asus ROG Zephyrus M16 GU604 generation.

I admit that to me this seems to be the most exciting Zephyrus launched so far in 2023; I don’t mind the slight increase in weight considering everything else offered here. Especially when this remains lightweight in comparison to the 2023 updates of other past thin-and-light designs, such as the Razer Blade 16 or the Alienware x16.