Unlike the XPS 13 Plus 9320 model launched a few months ago and reviewed here, the XPS 13 9315 carries on the design lines of the iconic XPS 13 series as a more standard 13-inch thin-and-light notebook with a more affordable price, starting at $999 for the base configuration.

If you’re not new here you probably know already that the XPS 13 has been my personal ultrabook of choice for many years now, and that I’ve followed and reviewed the multiple XPS 13 launches available over the years.

On first glance, this mid-2022 XPS 13 looks like a hardware bump of the previous XPS 13 9310 chassis, now configurable with 12th-gen Intel Core U processors, LPDDR5 memory, and PCIe gen4 storage, but it actually comes with a few controversial and even potentially deal-breaking changes. Among them, there’s the minimized IO that only includes 2x USB-C ports with Thunderbolt 4 now, which means that there’s no longer an audio jack on this XPS 13 generation, as well as the transition towards a lower-power hardware platform with a more basic thermal module.

If you’ve seen an XPS 13 in the last few years, you’ll know what to expect in terms of looks and overall feel from this mid-2022 update. Dell kept the design lines consistent with their past models, but made this generation a little bit thinner and lighter than in the past, as shown in the specs above.

They sacrificed the IO in the process, ditching the audio jack and microSD card reader that were available with the previous chassis. At least they spread the two USB-C ports on either side, so you can charge this or plug in peripherals on either side.

I don’t care about the card reader that much, but the lack of an audio jack on a laptop makes little sense to me, and I expect some potential buyers to steer away from this XPS as a result. Sure, USB-C to USB-A and USB-C to 3.5 mm audio jack adapters are included in the pack, but that’s not the same. Even Apple backed away from this minimal IO approach with their latest MacBook Air, despite the popularity of their wireless AirPods among Apple users, but Dell still cut out the audio jack with both this regular XPS 13 and their 2022 XPS 13 Plus. Up to you if this matters or not.

IO aside, this XPS 13 is one of the best-looking and crafted ultraportables on the market, and new for this generation are the two color schemes: Sky – a shade of blueish gray, and Umber – a shade of chocolate brown. Both look amazing and unlike in the past, the design is uniform all-over the laptop, which means the lid, interior, bottom, and keyboard are color-matched on both variants. 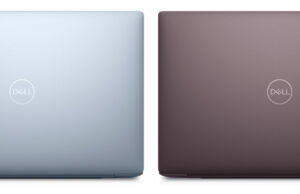 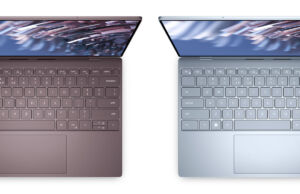 Other details worth mentioning here are the smooth feel of the aluminum materials used for the entire construction, the fact that lifting the lid is an easy one-hand operation and that the IR camera allows to seamlessly log into Windows, as well as that the screen doesn’t lean back flat to 180 degrees on the back with this design, which I’d want with this sort of an ultraportable laptop.

Speaking of the keyboard, the XPS 13 9315 inherits the standard chiclet keyboard layout of the past generations, and a standard mid-sized glass clickpad.

In fact, these inputs are one of the main differentiators from the more futuristic XPS 13 Plus design, with its unusual inputs. Here’s a picture of the two, for comparison.

Based on our experience with past XPS 13 units, the typing experience is going to be fine here, but the shallow feedback is not for everyone and will require some time to get used to.

As for the screen, at the time of the article – late-June 2022, there’s only a single panel option available for the XPS 13 9315 series on Dell’s US website, the matte IPS panel with 500 nits of brightness and 100% sRGB color coverage, which was also offered with base-level configurations of the previous XPS 13 generations. This is a solid option for everyday use in all sorts of conditions, especially thanks to its high brightness and non-glare finishing, but it lacks the punchy colors offered by other panels available on ultraportables today.

From what I’m seeing, Dell are positioning the XPS 13 9315 as the entry point into their 2022 ultrabook lineup now, and try to steer you towards the XPS 13 Plus model for specific display options and for higher-performance specs.

However, the specs and manual also mention an FHD+ touch and a UHD+ touch (with 90% DCI-P3) panel options for this series, but the OLED panel remains exclusive to the XPS 13 Plus. Not sure if these will be added to the US listing later on, or if they will only be offered in non-US markets.

One other aspect worth mentioning is that you’re also getting slightly better audio with the XPS 13 Plus, as this XPS 13 9315 inherits the middling audio solution of the past XPS 13 models, with only two bottom/side-firing speakers. Those are fine for everyday use, but no match for MacBook speakers or even the audio in the 13 Plus, with the dual-force speakers.

That means this series can be configured with either an Intel Core i5-1230U or an Intel Core i7-1250U processor, both hybrid designs with 2 Performance cores and 8 Efficient Cores, as well as 12 Threads. These are paired with Iris Xe graphics, LPDDR5 memory, PCIe 4.0 storage (BGA x2 connection), and fast wireless connectivity.

Compared to previous XPS 13 models, this 2022 update no longer offers an easily upgradeable M.2 2280 SSD, but steers towards a soldered BGA SSD format. So you’ll need to get the required SSD capacity from Dell, which can be costly. Plus, you can only get up to 1 TB of storage space on this unit, and not up to 2 TB as in the past, which might matter to some of you.

As for the choice between the i7 and i5 processors, the P cores on the i7 run at higher Turbo clocks and benefit from extra cache memory, while the Iris Xe graphics on the i7 get more EUs and run at higher frequencies than on the i5. Nonetheless, both these platforms are power-limited designs, with a base design power of 9W and the ability to run at around 15W (my expectation) of power on the Ultra-Performance profile. At this point, Dell haven’t provided details on the power settings and overall performance of this XPS series, but we can make some assumptions.

First off, though, I must touch on the thermal design of this XPS 13 9315 series. The previous XPS 13 9310 got a dual-fan single-heatpipe thermal module with an open air-grill on the bottom panel, and was capable of around 20W of sustained CPU power in demanding loads.

With the 9315 update, the D-Panel no longer includes an open air-intake grill over the heatpipe, and the cooling module gets a single fan and a single-heatpipe. Thus, we can expect the overall power to drop to around 12-15W sustained, based on the specs and available service manuals. 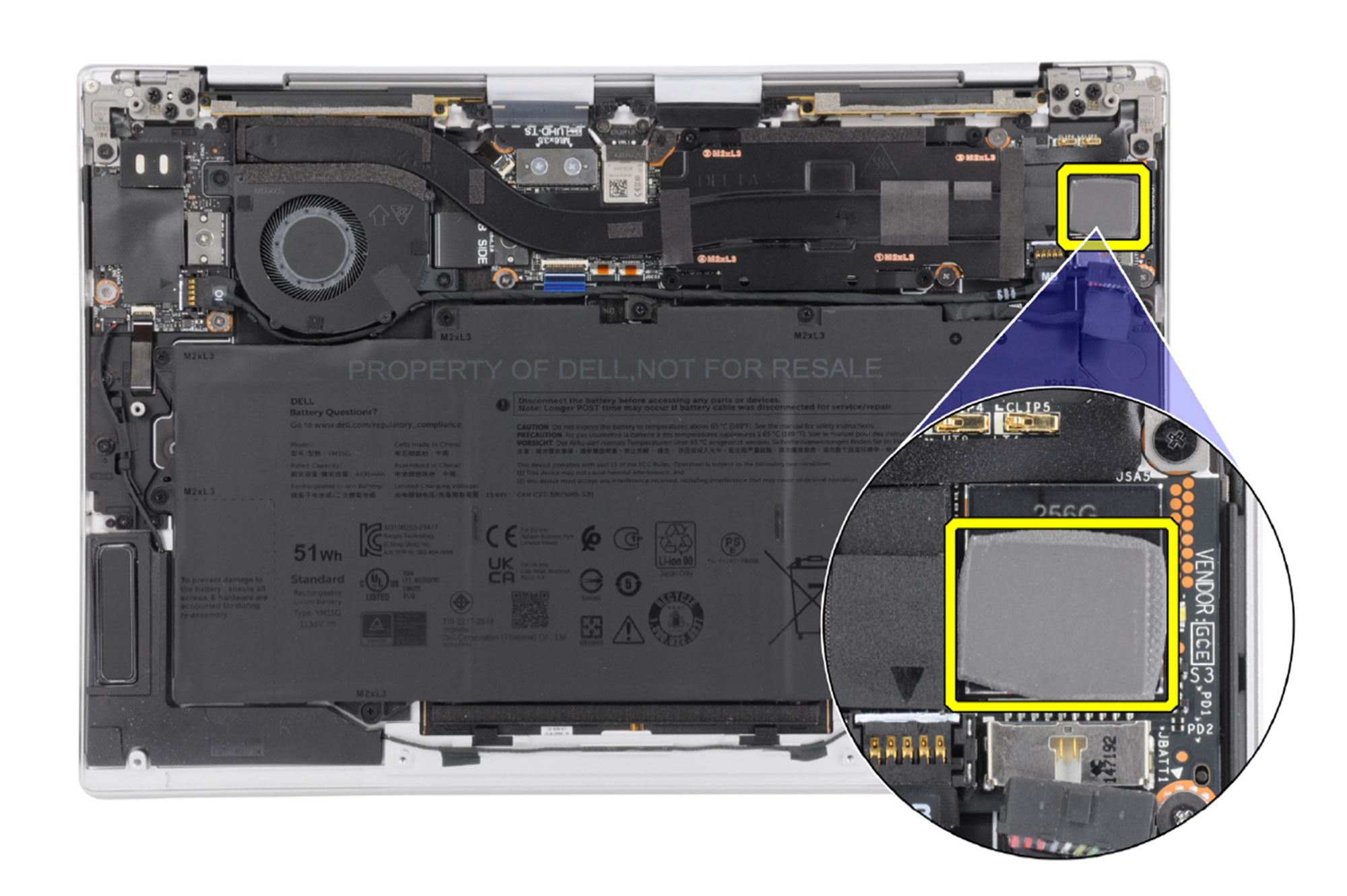 And here’s the bottom panel design, which is identical to the design of the XPS 13 Plus 9320. Based on our review of the Plus model, the lack of an intake grill shouldn’t be a concern here. 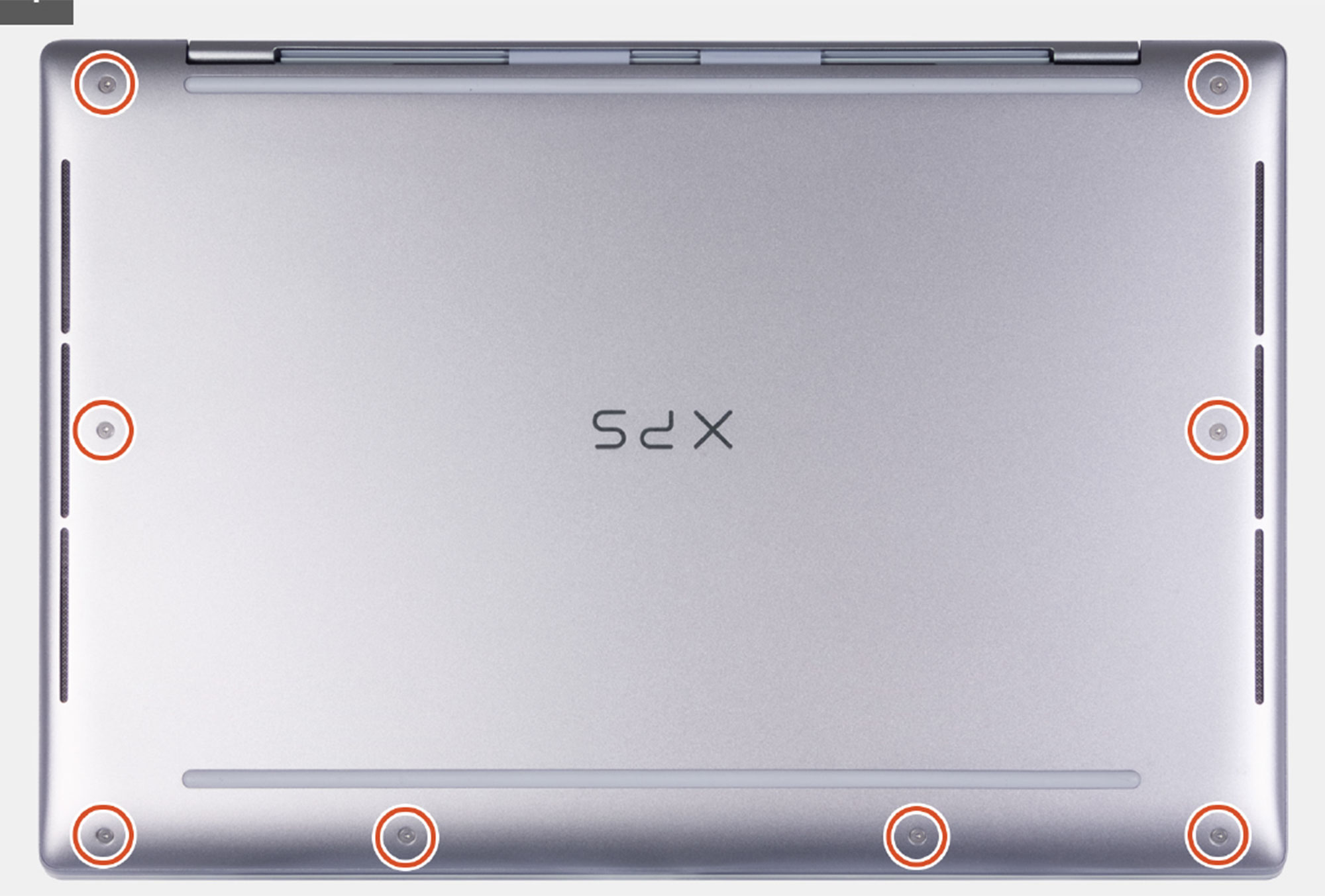 Knowing these, I wouldn’t expect the XPS 13 9315 to perform significantly faster than the XPS 13 9310, despite the updated platform. It should do better in CPU multi-threade loads, though, with the extra cores and threads, and it should also feel snappier with light use and multitasking, thanks to the IPC improvements offered by the Alder Lake platform over Tiger Lake.

At the same time, I’d also expect the overall GPU performance of these 12th-gen Core U platforms to decrease compared to Tiger Lake, as the Iris Xe chips in these processors are running at lower frequencies than the Iris Xe iGPUs in the i7-1165G7 or the i5-1135G7. We’ll know more once we get to properly review the XPS 13 9315 model, but for now, we can comfortably conclude that you should not get one of these for their processing capabilities in demanding loads.

If that’s what you’re after, the XPS 13 Plus built on the 12th-gen Core P28 hardware or something like an Asus ZenBook S 13 built on the arguably better-balanced AMD Ryzern 7 6800U platform are alternatives worth considering. You’ll also find a wider selection of recommended ultrabooks in this separate article.

Instead, the regular mid-2022 XPS 13 9315 should be considered as an ultra-compact daily driver, much like the previous XPS 13s have been. For that kind of use, this generation is going to perform a little snappier with daily chores, multitasking, and light workloads than the previous models, while being a little more portable and as nicely-crafted.

I’m hoping that this XPS 13 generation won’t compromise on noise levels, temperatures, or especially battery life. There’s a 51 Wh battery inside this laptop, rather small by today’s standards, and our encounters with multiple Alder Lake units so far have failed to impress in efficiency. Hopefully, that’s not the case with these 12th-gen low-power U implementations, as short battery life would be a major deal-breaker for the series.

Sure, you can pay extra for the i7 processor or 32 GB of RAM and 1 TB of storage space, but they’re not going to make much difference with this sort of power-limited design. Instead, if you need a more powerful ultrabook, I’d rather look into something else entirely, as the XPS 13 9315 is not designed with performance in mind.

We’d need to dig deeper in a proper review before I can draw proper conclusions on this mid-2022 Dell XPS 13 9315 series, but the first impression leaves me with mixed feelings.

Update: Our detailed review of the Dell XPS 13 9315 is available here.

On one side, I’m happy that Dell are still offering this series at a sub $1000 price point in today’s environment, where everything else gets more and more expensive, especially as the base-level model should be adequate for the average user looking into one of these laptops. I also like the new colors and overall feel offered by this series.

On the other, I’m not happy with the USB-C-only IO or with the limited screen back-angle. At the same time, I’m looking forward to testing the efficiency of this implementation with daily use, where I’m hoping the 12th-gen U hardware won’t disappoint in the same way Core P and H do.

Bottom point, it’s important to understand that this XPS 13 9315 is no longer the multi-purpose ultrabook that could go heads-on against any of the other options out there in the ultrabook space. Instead, this is now meant for casual use and daily multitasking, and designed with efficiency in mind, as a result of the implemented hardware and the minimal cooling module, both a step-back in concept compared to previous XPS 13 models.

From now on, the XPS 13 Plus subseries steps up as the more versatile compact XPS, while this standard XPS 13 remains the more affordable and less powerful option. And that’s perfectly fine, as long as you understand the differences and choose the right option for your needs.

Look for our future review for more details, and in the meantime, let me know what you think about this Dell XPS 13 9315 update and how it compares to the other similar ultraportables out there, such as the MacBook Air, the Surface Laptop, or the ThinkPad X1 Nano (X1 Nano review available here).