However, their 2021 generations lacked a few important details that prevented them from competing against the heavyweights, and from what I can tell right now, Asus were able to address some of these with the 2022 updates of the SCAR lineup. Not all, though.

Last year Asus revamped the SCAR 15 and SCAR 17 designs, opting for a more compact chassis than before, cleaner looks, and a new internal layout. Because Asus usually implement a 2-year redesign cycle, the 2022 SCARs are pretty much the same chassis as the 2021 models, thus Asus were only able to address some of our complaints of the previous models.

That means the 2022 SCARs are still laptops with 16:9 screens, without a camera, without biometrics, and with an arguably useless Keystone on the right edge instead of a more practical SD card-reader. These haven’t changed, but many other aspects have.

I got to spend a few days with these pre-production implementations of both the SCAR 15 and the SCAR 17 and can share some thoughts about them with you. We’re not going to get in-depth on the performance of the new hardware platforms at this point, that’s coming once we get the finalized products with final software, hopefully in the next couple of weeks.

Update: Our detailed review of the 2022 ROG Scar 17 series is available here.

Update2: Redesigned Scar models are available in the meantime, with the ROG Scar 18 and Scar 16 lineups, as well as the hardware-refreshed ROG Scar 17 AMD model.

So, on the outside, these SCARs are nearly a perfect replica of the 2021 models, but with a more minimalistic design for the lid and a more subtly lit ROG logo.

Before, the entire logo was backlit, and now only the perimeter is lit, and the interior is not. I liked how the previous SCARs look and I do like the cleaner exterior of these updates as well. There are still plenty of RGB elements, but they are all controllable in the software and can be switched off individually if you want to.

Other than that, these laptops are still built like small tanks and feel robust and sturdy. Metal is only used for the lid, while everything else is different kinds of plastic, with a soft smudgy finish for the arm-rest and a translucent part that shows off the components, as well as rougher plastic for the sides and underbelly. Asus didn’t ditch those pesky status LEDs that are placed just under the screen, or the always-on red light in the power button.

I just noticed that somehow the 2022 SCAR 15 weighs in a little less than the 2021 model we tested last year, but the 17-inch model is similar to the 2021 Scar in weight. Not sure what’s what here, but take it with a grain of salt. Speaking of weight, though, with the higher-power settings on both models, Asus also bundled in a higher-capacity 280W charger, which is their older bulkier design that weighs in heavier than the 240W charger offered with the 2021 SCAR models. 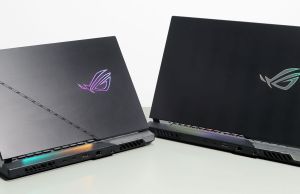 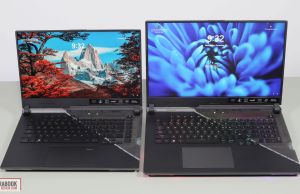 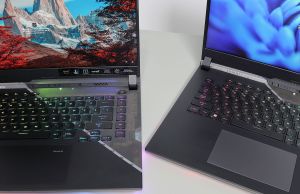 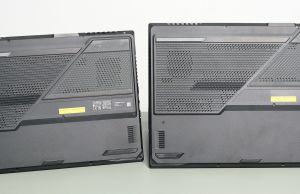 That aside, the screen still doesn’t lean back past 110 degrees or so, but is sturdily kept in place by the stiff hinges and can be adjusted with a single hand. The limited angle is OK for desk use, but inconvenient when using the laptop on the lap or while laying on the couch.

As for the IO, that’s still mostly on the back of the laptop and on the left side, with the right reserved for the Keystone. As a novelty, there are only 2x USB-A slots now, and 2x USB-C ports on the back: one of them supports Thunderbolt 4 with data and video and is plugged into the iGPU, and the other supports data and video through the dGPU. 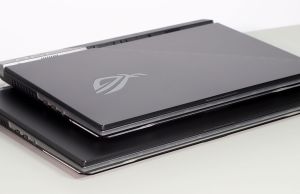 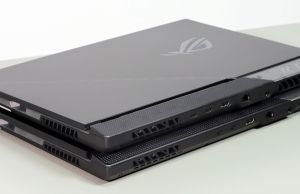 As mentioned already, there are still 16:9 panels on these SCARs, with a 15.6-inch option on the smaller model and a 17.3-inch version on the SCAR 17. Both come with hefty chins and no cameras at the top.

I sure would have appreciated a 16-inch panel with a smaller bezel on a potential SCAR 16, such as the one that Asus offers with the Zephyrus M16. That could have made the SCAR an excellent counterparty for the Lenovo Legion 7.

At least Asus have slightly updated the panel options here, with either FHD 360Hz or QHD 240Hz options available on the Scar 17, and QHD 240Hz on the Scar 15 – tehre’s no 15-inch FHD 360Hz due to supply issues. The QHDs are by far the better-balanced choices and what I’d recommend, both excellent for daily use with the balanced contrast and brightness, for color-accurate work with the 100% DCI-P3 gamut coverage, and for gaming with the fast 3ms response and high-refresh rates. 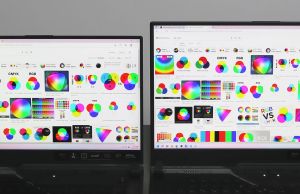 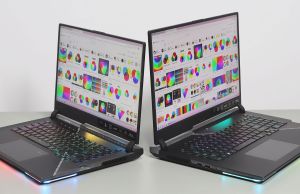 . Scrap that, I was wrong, there’s only Adaptive Sync on the internal display in either the dGPU or Optimus modes, and GSync is only supported on compatible external monitors. However, there is a MUX, and that’s one of the major updates of these 2022 SCARs.

Screen’s aside, it seems that Asus have decided to ditch the mechanical keyboards offered on the 2021 SCARs for the rubber-dome keyboards available before on the regular Strix models.

I can’t tell for sure if the mechanical keyboards will remain potential options for these 2022 SCARs, but I for one am not going to miss them. Sure, they felt interesting and sounded like a nice differentiator on paper, but to me (and many others, based on reviews) they just didn’t feel right. They were also quite noisy with the clicky actuations.

So as far as I’m concerned, rolling back to the rubber-dome RGB keyboards was the right thing to do. The layouts are a little different between the two sizes, with a column of media keys at the very right on the Scar 15, and a NumPad section on the Scar 17.

There are a few important details to take out.

For starters, the 2022 ROG Strix SCAR lineups are now Intel exclusive, while the 2021 models were AMD exclusive. Don’t worry, though, the regular ROG Strix G15/G17 models remain AMD exclusive, with small design changes and almost all of the technologies and features offered by the SCARs, so overall we’re now given options of either Intel or AMD hardware between the two series.

We’re looking at the Intel Alder Lake Core H platforms, with CPU options up to the 14Core Intel Core i9-12900H, up to 64 GB of DDR5-4800 memory, and two PCIe 4.0 storage slots. I can’t get into any details on the performance of these chips, but expect a noticeable update over the previous Intel and AMD generation. I’d also expect the CPUs to able to run at 80+W of sustained power on the Performance profile, given the past experience with the 2021 SCARs.

There’s also a MUX, so a direct connection between the Nvidia dGPUs and the internal display if you opt for that mode, with a positive impact on the gaming performance in most titles. There’s no Advanced Optimus technology here (thankfully, given the experience of the Zephyrus S17), just the regular MUX that requires a restart when changing between modes. 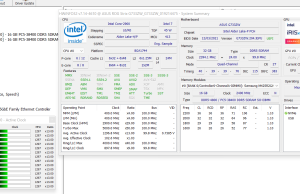 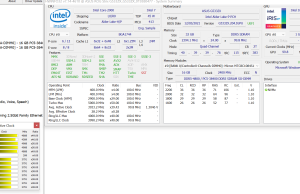 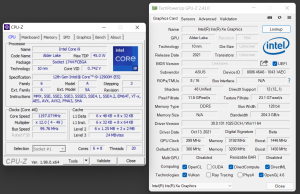 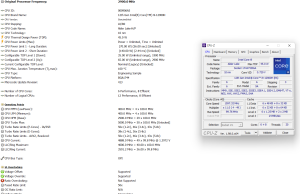 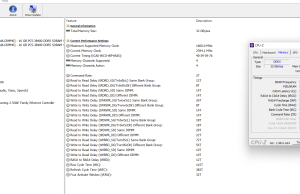 With the bump to 12th gen Intel platform Asus have also updated the connectivity of these laptops, with WiFi 6E and Bluetooth 5.2 through Intel AX211 modules, as well as 2.5 GbE for wired Internet access.

One other aspect to mention is the updated thermal compound that Asus are using for the CPU on the 2022 SCARs and select few other ROG models such as the ROG Zephyrus Duo 16 GX650, called Thermal Grizzly Coductonaut Extreme liquid metal compound. This no longer uses tin in the formula and helps lower the temperatures in comparison to the liquid metal used in the past (and still used on the 2022 ROG Strix and Zephyrus G/M models), but it’s also twice as expensive and more difficult to apply, according to Asus, that’s why it’s only offered with their highest-tier notebooks.

There’s still regular thermal paste on the GPU, and the thermal modules have not been altered between the 2021 and 2022 models. Asus did mention slightly updated rubber feet, taller in order to improve the airflow into the fans, but they don’t seem any different to me on these early samples. This aspect would be important, as the small-profile feet choked the intakes on the previous SCARs in our tests, leading to increased temperatures while using the laptops on a desk.

I’m curious how these 2022 generations are able to deal with the internal temperatures, considering the GPUs have now been bumped to 150W, and Asus are still aiming for a 45 dB fan-noise level (which we’ll further test in the reviews) on the Turbo profile, so they’re not ramping up the fans to 50+ dB in the same way other manufacturers do on their top-profiles. You do get the ability to ramp up the fans in the Manual mode in Armory Crate.

Speaking of, both SCARs implement the 0dB technology as well, which allows the fans to shut off with light use as long as the components stay under 60 degrees Celsius. Based on my time with the previous gens and these early samples, the fans keep silent for most of the time with everyday use on these notebooks.

Anyway, for now, I couldn’t run any tests on these early samples. So look forward to our final reviews, hopefully in the next couple of weeks.

All in all, I’m happy with most of the changes on these 2022 ROG SCAR laptops. Among the important updates, these now support Thunderbolt and USB-C charging, get faster WiFi 6E connectivity, dumped the pesky mechanical keyboards for a more balanced rubber-dome keyboard that I prefer with everyday use, cleaned up the design a little bit, and updated the hardware.

The fact that these are now Intel exclusive might make some of you angry, but I’m looking forward to the Alder Lake hardware. Given how this is so much different than what Intel offered before and how the Big.Little design sounds like a potentially great match for laptops, plus given how AMD are in a tok cycle with the Ryzen 6000 Zen3+ hardware, I feel that Intel platforms could be the better choice for most laptop segments in 2022, as long as the software is able to cope with the design.

Paired with the DDR5 memory, faster storage, updated graphics chips, and the MUX, I’d expect 10-20% performance gains in combined loads and 5-25% higher framerates on these 2022 SCARs compared to the 2021 models.

For the AMD enthusiasts, Asus still offer the regular ROG Strix G15 and G17 series with Ryzen 6000 hardware, the same kind of memory, storage, graphics, and MUX, the only difference being the updated thermal compound that’s only used on these Intel options available on the SCARs.

So at this point, I’m looking forward to testing out the 2022 platforms and comparing them to the previous gens and the other options out there. Stay around for those reviews and updates.

Nonetheless, I’m still salty Asus did not put a 16-inch screen on the smaller SCAR chassis, and a bloody camera at the top. Those two updates would have made a big difference to me, and I think would have greatly mattered to many other potential buyers. What do you guys think?

Update: Our detailed review of the 2022 ROG Scar 17 series is available here.