Alongside the multitude of other launches, Asus have also updated their mainstream lineups of ZenBook 14 ultrabooks for 2022, and didn’t stick to just a hardware refresh.

In fact, these 2022 ZenBook 14s are completely different than the previous generations, with a cleaner design, an updated IO and keyboard, OLED screens on most configurations, a new thermal module, and a bigger battery. Plus the refreshed Intel and AMD hardware.

On the Intel side, the 2022 ZenBook 14 UX4302 series is built on 12th-gen Alder Lake U15 and P28 processors, with DDR5 and PCIe gen4 storage, while on the AMD side, the ZenBook 14 UM4302 is only available with the refreshed Ryzen 5000 Barcelo hardware, and not the newer Ryzen 6800U/6600U processors, at least at launch – those are available in the smaller Zenbook S 13 chassis. That means these are still based on DDR4 memory, PCIe gen3 storage, and Vega integrated graphics, but everything else should be identical between the two.

Well, except for the color schemes, where Asus offers either a silver – Aqua Celadon or Blue – Ponder Blue variant for the Intel models, and only a Jade Black color for the AMD options.

Update: Our detailed review of the ZenBook 14 UX3402 series is available here, and here’s our coverage of the 2023 Asus ZenBook 14 and Flip 14 updates.

They’re all a breath of fresh air in comparison to the previous generations, with cleaner lids inspired by Japanese traditional arts, and more subtle written or monographed branding elements. Out of the three, I lean towards the stealth looks of the Black version, although I do expect that to be a magnet for smudges. The Silver variant looks blander, but is most likely the most care-free of them all, while the Dark Blue is probably the jack of all trades within these options. 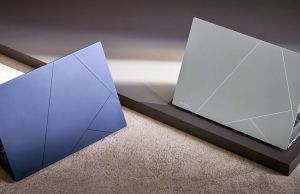 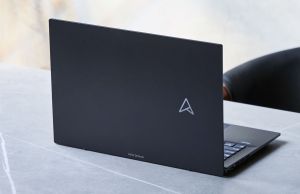 All in all, I’m happy to see Asus steer away from their traditional ZenBook lid design with the pattern of concentric circles spurring from the shiny ASUS logo – it felt more and more dated over the years.

Here’s a specs sheet of these early-2022 ZenBook 14s right next to the previous design from 2020/2021, and we’ll continue with our first-hand impressions further down.

Lots of changes, starting with the overall size and weight of this ZenBook 14 generation, now thicker, larger and heavier than before. That’s because both these 2022 ZenBook 14s get glass-covered 16:10 screens now, a slightly sturdier chassis, as well as updated internals and a bigger battery.

All in all, I don’t mind ~100 grams of extra weight for all these improvements, but sure, at 3+ lbs this is not as lightweight as other ultrabooks, so you’ll just have to look elsewhere for an ultra-light design.

It’s also not the most compact 14-incher either, as you can tell based on the bezels around the 16:10 displays, with a fair-sized forehead at the top and chin underneath. There’s an HD camera on that top bezel, but it no longer offers IR functionality. Instead, biometrics are now entirely handled by the addition of a finger-sensor in the power button, a design previously seen with the Zenbook 14X models in late-2021.

As far as ergonomics go, I appreciate this laptop’s grip on the desk, the more spacious arm-rest, and the fact that Asus slightly dulled the front lip and corner and ditched the beveled machine edges used with the previous generations. I’m also happy to see the status LEDs on the side, and not under the screen.

One other major update is the updated pair of Ergolift hinges, which now allow the screen to go back flat to 180-degrees. They still push up the main chassis from the desk in order to improve the airflow into the fans. 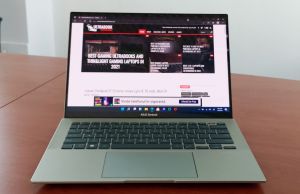 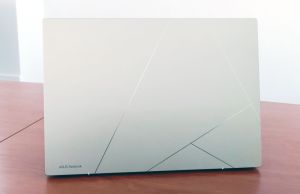 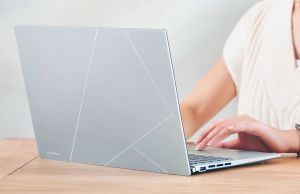 Speaking of, the thermal design has been completely updated as well, with the radiator now placed on the left edge and the hot air no longer blowing into the display. We’ll take a look at the internal redesign further down in the article.

However, with the radiator moved to the left side, most of the IO has been sent to the right edge, including the HDMI port and the two USB-C ports, which support Thunderbolt 4 on the Intel configurations, and USB-C 3.2 gen2s with data/video/charging on the AMD models. It’s unusual and rather impractical to have all the connectors and cables on the right, especially if you’re going to use a mouse with your laptop.

Asus should have given this aspect a little more thought; ideally, I would have liked to have one USB-C port on each side, or at least mirror this design and have the radiator on the right and all the ports on the left instead. Nonetheless, as far as I can tell so far, this IO placement is my only real nit with these 2022 ZenBook 14s designs. 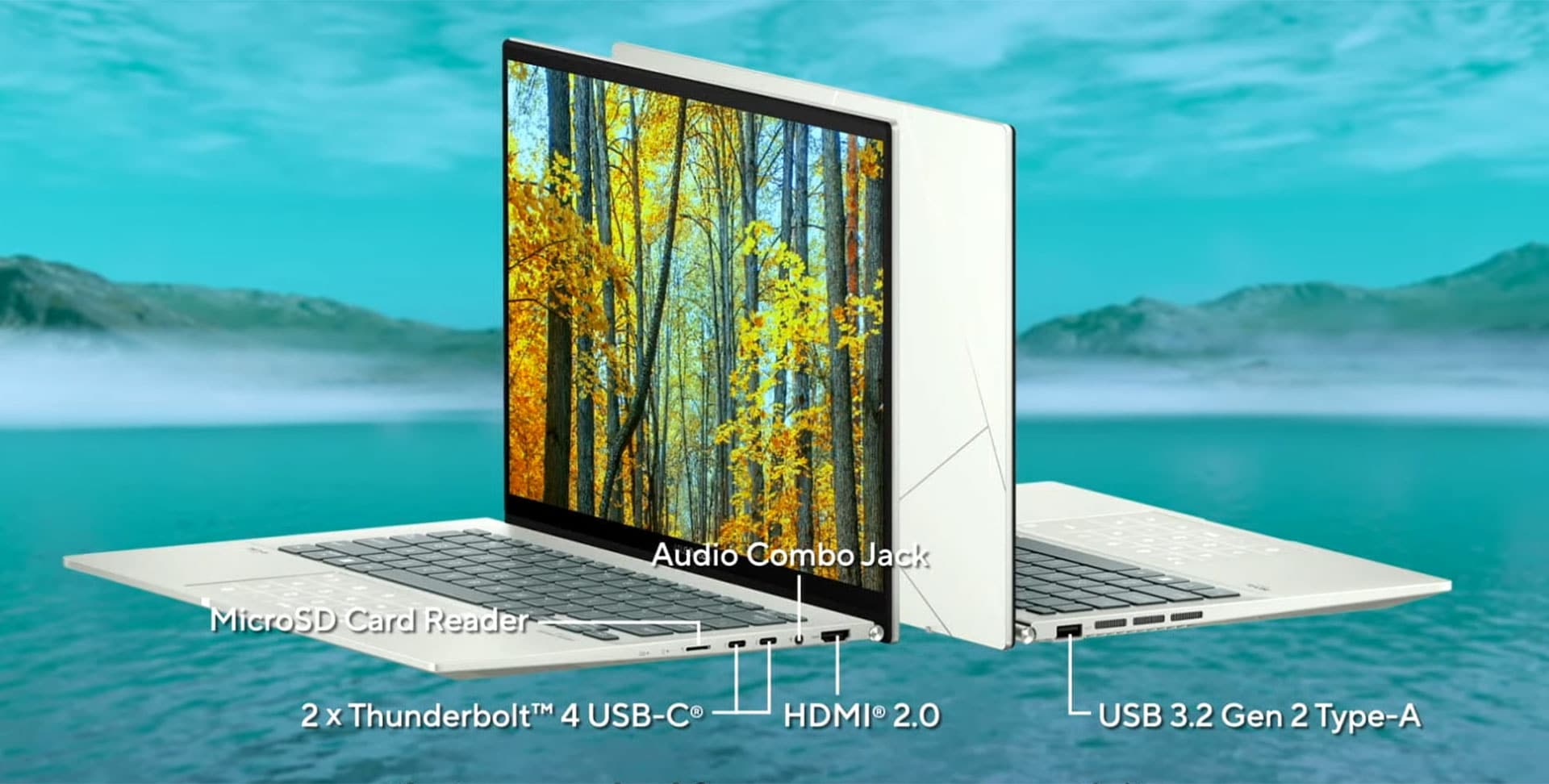 Asus only mentioned a 2.8K OLED panel with 550-nits of brightness and 100% DCI-P3 color coverage for the 2022 ZenBook 14s, but I’m pretty sure this can’t be the only panel option. The OLED on our sample is also covered in a layer of glass, with touch support.

Hopefully, matte IPS QHD+ options with good brightness and colors would also be available for this series, or even some decent FHD+ panels on the entry configurations. OLEDs sure look nice, but they’re also expensive and might not be for everyone on a laptop, due to potential flickering and even long term image-retention. 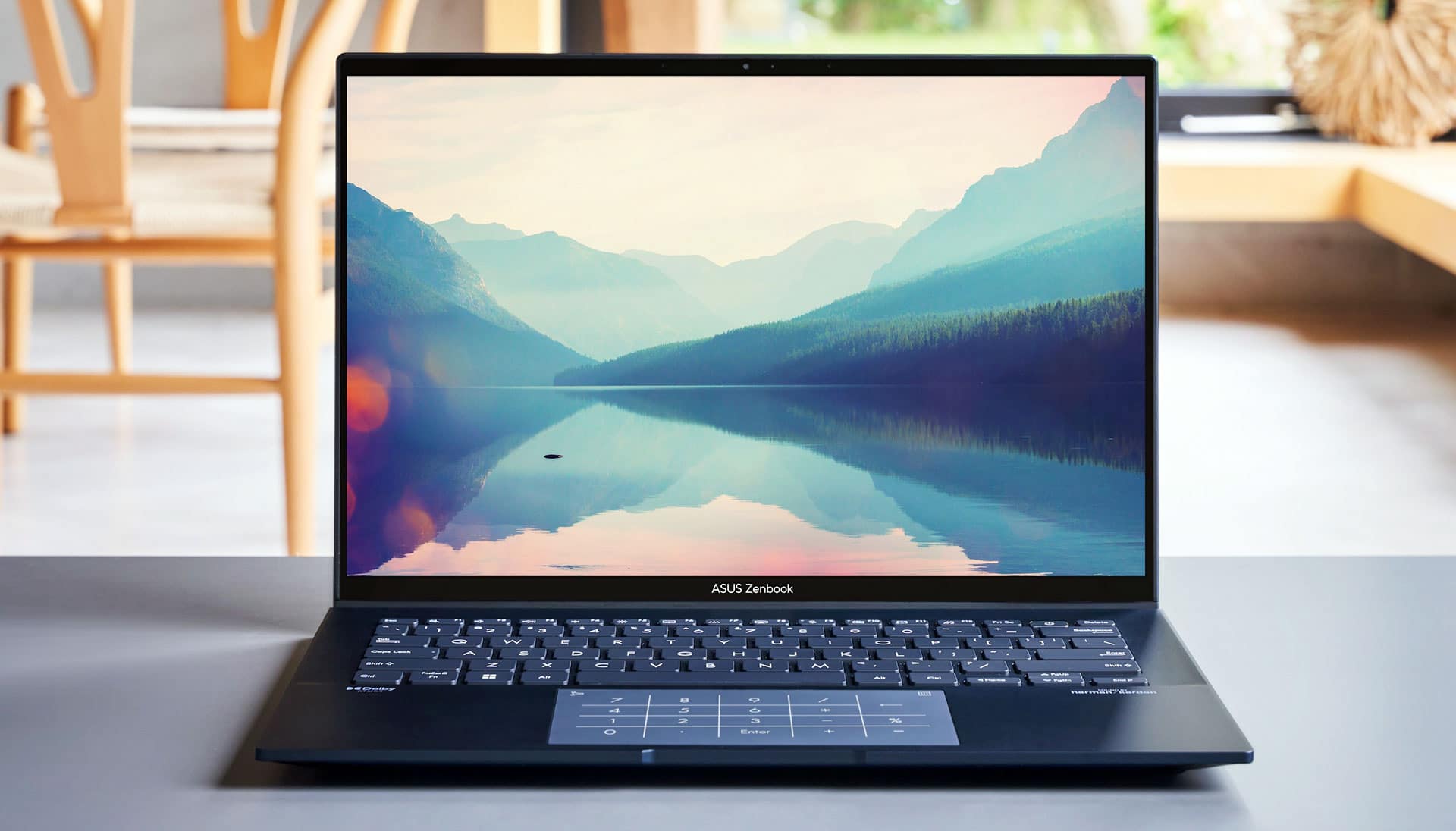 As far as the inputs go, I haven’t spent enough time with this sample to properly figure things out, but I can tell you that Asus have redesigned the keyboard layout and overall feedback in comparison to the previous generation, and I’m not happy with the change.

Compared to the previous ZenBook 14s, the layout is narrower and no longer includes that extra column of function keys at the very right. This is perhaps a consequence of the chassis being a few mm smaller with the 2022 design, but I could have well lived with 3-4 mm of extra width and side bezels if that didn’t affect what was one of the best layouts available in a 14-inch ultrabook.

The keycaps also have a small dish in them for better tactile feedback, and the travel depth is 1.4 mm, so I’m curious how the overall feedback was impacted. The previous ZenBook 14s offered one of my favorite keyboards implemented on any ultrabook, and I sure hope this hasn’t changed with the 2022 updates. My expectations are that this new keyboard is similar to the one in the Vivobook 14X, which I enjoyed during my time with it.

What I do like is how the keys color-match the overall design color. You’re also getting a more ample arm-rest on this ZenBook 14 update, and that allowed Asus to implement a taller, but shorter, clickpad with the same NumberPad functionality that we’ve seen on previous ZenBooks. It’s still glass, so it should work fine. 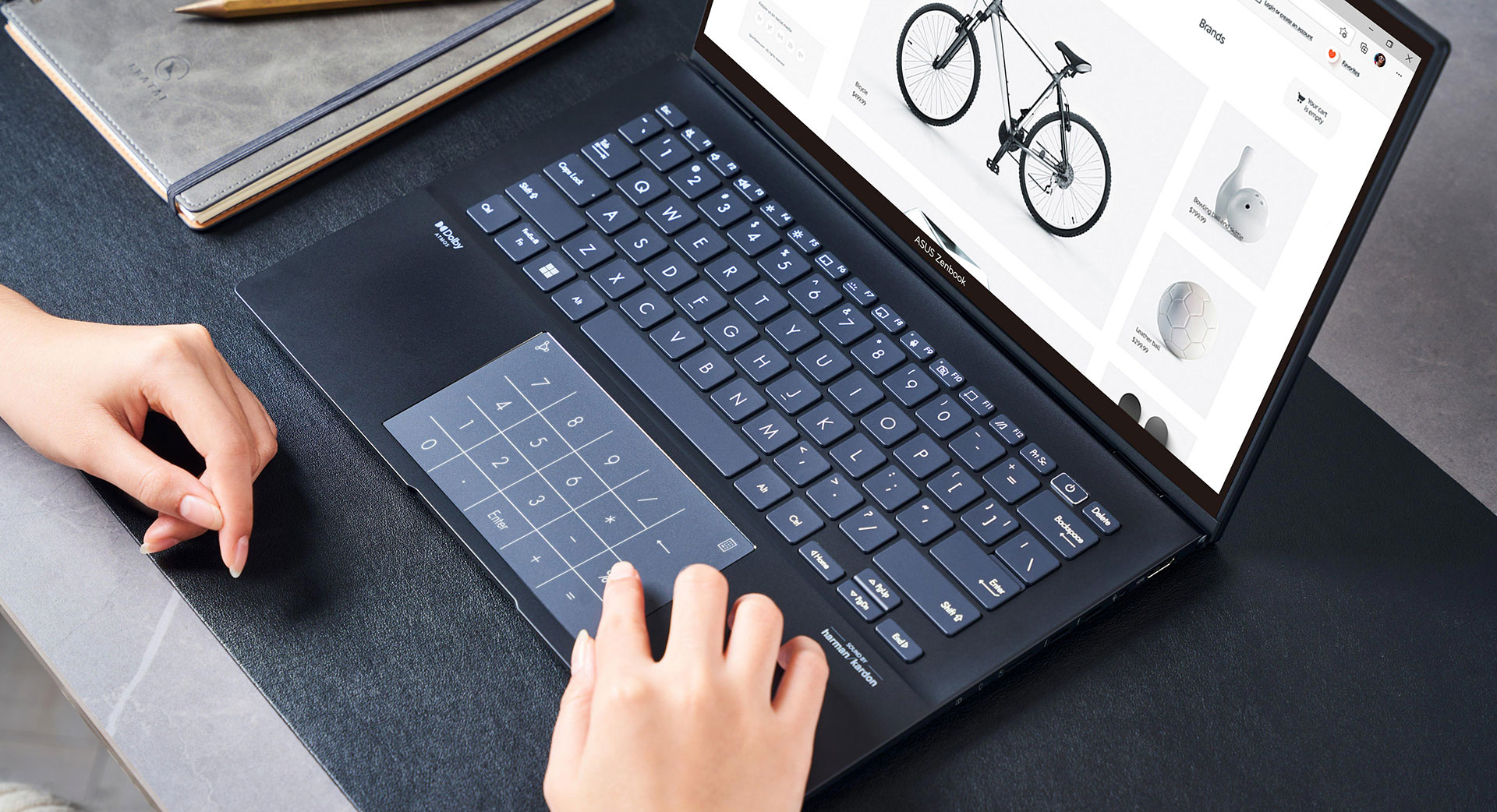 As far as the hardware goes, you can either get the Intel 12th gen Alder Lake variants of these ZenBooks, or AMD configurations based on a refreshed AMD Ryzen 5000 Barcelo platform.

For now, there are no options for the Rembrandt Ryzen 6000 U processors with the ZenBook 14 UM3402 configurations, with the DDR5 support and the RDNA2-based graphics. On Barcelo, you’re getting the higher-clocked CPU cores available with the Rembrandt platform, but you’re sticking with the previous-gen Vega graphics, DDR4 memory, and PCIe gen3 storage, which might not suffice for some of you. I was hoping to see Ryzen 6000 on this ultrabook platform as well, and perhaps it will be available later on when the availability for the Rembrandt chips improves. For now, Rembrandt is only announced for the ZenBook S 13 lineup.

In all fairness, the AMD Barcelo Ryzen 7 5825U that you can get for the top UM3402 configuration is definitely no slouch as far as the CPU performance goes, as a higher-clocked iteration of the 5800U from last year. It just doesn’t support DDR5 and is somewhat limited on the GPU side with the now-aging Vega chip.

As a result, as far as the multi-threading performance goes, I’d expect the AMD configuration to still have an edge over the Intel models. However, these offer faster graphics, memory, and storage.

Of course, it will all come on the power settings that Asus chose for these implementations, which are dependant on the overall capabilities of the thermal module. Previously, the ZenBook 14s were only able to run at 18-20W of sustained power in demanding loads, and I’m hoping the limit has been increased for these 2022 updates. No way to tell for sure at this point.

The efficiency and software support for these Intel/AMD platforms are other aspects to consider in our decisions. With the AMD hardware, we pretty much know what to expect already based on our experience with the 2021 implementations, but with the Intel Alder Lake configurations, all these are still a mystery that only proper reviews will be able to solve. Stay close for our full impressions in the weeks to come.

As far as the internal design goes, here’s the 2022 Zenbook 14 UX3402 next to the 2021 Zenbook 14 UX425. The heatpipe seems a little longer with this new design, and there’s a larger thermal plate over the VRMs, but aside from the fact that the layout is different, these two thermal modules are fundamentally fairly similar.

The pics above also show the larger battery, a consequence of the taller chassis implemented on the 2022 generation, as well as some redesigned speakers, which would hopefully translate in improved audio quality.

All in all, these 2022 ZenBook 14s are significant overhauls of the previous generations, both in terms of design and hardware specs, but also in terms of ergonomics and functionality.

I’m happy to see 16:10 displays on these and a 180-degree hinge and a thermal module that no longer blows the hot air into the screen. I’m also happy with the selection of ports, even if they’re rather unfortunately grouped together on the right edge, and I appreciate the bigger batteries that should offer excellent runtimes unplugged. And while not ideal, I’m also OK with the slight increase in size and weight.

At the same time, I’m still looking to fill up all the blanks on the performance of the updated platforms and cooling solutions, the ergonomics of the new keyboard, as well as the screen options that Asus will offer for this series – I expect to be given both IPS and OLED options. Oh, and I also hope these will remain as competitively proved as the previous generations, despite the updates.

Update: Our detailed review of the ZenBook 14 UX3402 series is available here.

We’ll know more once we get our hands on some finalized review units, so stay around. In the meantime, I’d also love to hear your thoughts on these early-2022 ZenBook 14 UX3402 and UM3402 ultraportable designs, so get in touch down below. 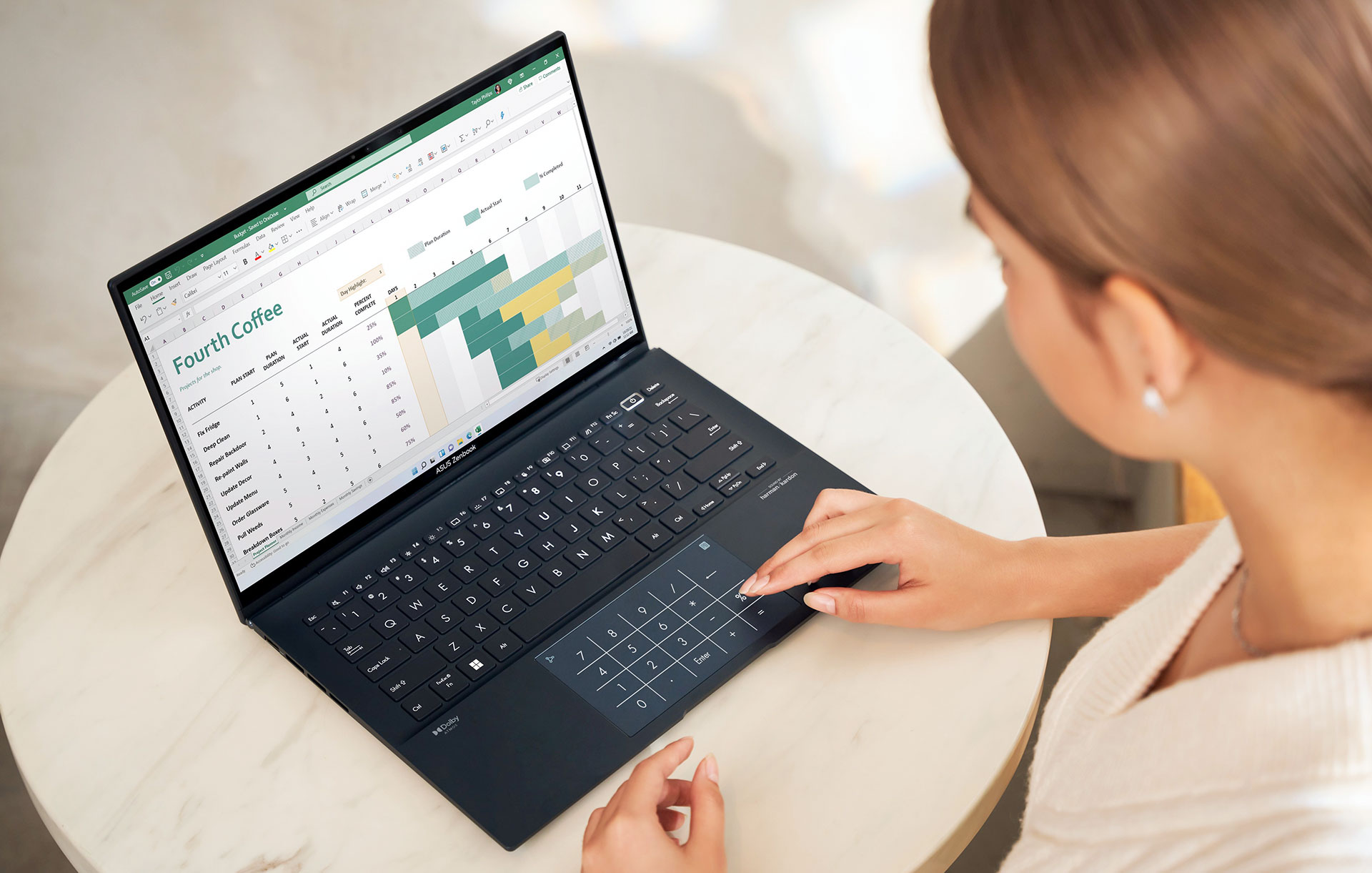