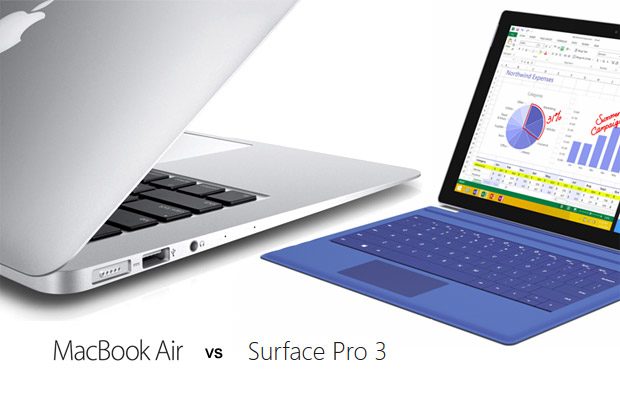 Microsoft’s Surface Pro lineup of tablets has been around for many years now, and received fairly well by customers across the world for primarily it’s ultra-portable form factor. However, the Surfaced Pro models of the past yeras were a diare need for a redesign, and the Surface Pro 8 is finally that potentially game changer that makes the lineup feel modern and premium again.

The latest Surface, while still a tablet format, is no longer advertised as an iPad competitor, but as “the tablet that can replace the laptop” according to Microsoft’s corporate vice president, Panos Panay.

But is it? Well, let’s see how this new Surface fares against the average Windows ultrabook and the Macbook Air of this generation.

The initial smaller Surface computers have been jacks of two trades, trying to combine the touch-friendliness and portability of tablets with the productivity of laptops, while not excelling at either. The tablet experience was dragged down by the lack of proper apps, while the small 10 inch screen was not always enough to get things done.

The Surface Pro series carries on from last year’s Surface Pro, but is different in a few ways: the new device has a bigger screen, thus a more extended working area, has a newer and sturdier keyboard/trackpad folio, is more powerful and includes a larger battery, for extra battery life, and finally offers USB-C Thunderbolt 4 connectivity.

In only a couple of words, the Surface Pro is more or less an ultrabook in a different form factor. If it were to replace a laptop though, the Surface should be able to do all the things a regular laptop does, in a similar way a laptop does.

Now, a regular notebook has a clamshell body, with a screen and a keyboard/trackpad/palm-rest halfs, plus the hardware tucked inside the lower part of this ensemble. That gives it a low center of gravity and makes it, well, easy to use in your lap, or as Microsoft says it, “lapable”. More recent 2-in-1 laptops and convertibles have steered somewhat off this classic path, but are still following the same principles, as devices that can be comfortably used in most places and conditions, whether on a desk, on a tight Economy seat of an airplane or while lying down on the couch.

The previous Surfaces failed to do that, and the current Surface Pro still doesn’t master it. The thing is, the Surface Pro is a tablet, with all the hardware tucked behind the screen, and it comes with an adjustable kickstand on the back, which lets you easily place the slate on a flat surface, but not so much on your lap. The kickstand is fully adjustable on this latest Surface and can be locked on any angle that you want, which is a step forward from the older versions, but it still needs tweaking and fiddling to get it in a right position each time, while with laptops, it takes less than a second to lift up the screen and have it properly set-up.

Microsoft also worked on the Keyboard/TrackPad Type Cover of the Surface Pro, which now has a few extra magnets to keep it tighter tied to the slate in most cases. But even so, actually using this device on anything but a flat Surface is going to be lacking. 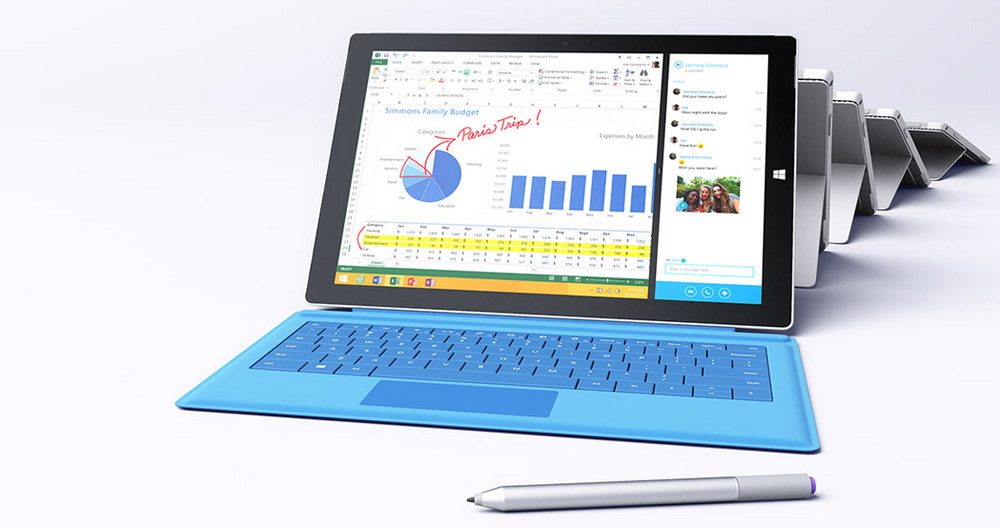 The Surface Pro is more interesting than the previous Surfaces

On top of that, the Surface has two other potential deal breakers: the ports around its side and the typing experience. Given how this is such a thin device, it was expected to have little room around the sides for connectors, but there’s still one USB slot on the Surface Pro, alongside a microSD card-reader and a Mini-DP. However, if you need more, the Surface is not the one for you. Or you can buy the docking unit (see the pictures below).

Last but not least, the Surface comes with a revised keyboard folio, called Type Cover. It packs taller and better spaced keys than before, plus a larger trackpad as well, and as a result the typing, tapping and clicking experience is much improved from the Surface Pro and the Pro 2. But the keyboard is still shallow, even by ultrabook standards, so heavy typists like myself might not find it good enough.

These are more or less the main things you might worry about when choosing between a Surface Pro and a regular ultraportable laptop (either ultrabooks or the Apple Macbook Air. Plus the fact that the Surface, with its 12 inch screen, might actually not be big enough for daily use. As someone who relies on a 12.5 inch laptop on a daily basis, that’s not going to bother me at all. You however might feel otherwise, but I’d suggest you should at least give it a try; with the 3:2 screen, the available screen-estate on the Surface is actually bigger than what you’re getting on 13 inch 16:9 displays. 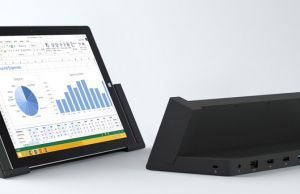 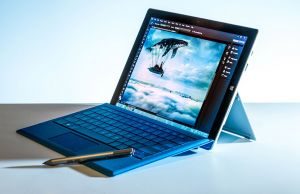 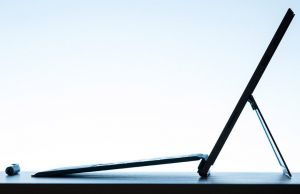 Where the Surface Pro 8 winds

All these aside, there are plenty of other reasons why you’d consider a Surface Pro 3 over an ultrabook or a Macbook Air.

This post from The Verge also looks at the Surface and the Macbook Air, as well as the video below, so you might want to check them out.

Unlike the 11.6 inch MBA, the Surface Pro  packs a larger 12 inch high-resolution touchscreen, with a 3:2 aspect ratio. And that’s more important than you might think on a first look, as it makes the tablet feel more “roomy” to use both in Portrait and in Landscape mode.

The Surface Pro integrates a digitizer (N-Trig though, not a Wacom one as on the Surface Pro 2) and comes with a preincluded pen, a combo that makes it suitable for taking notes, sketches, drawings and so on, but you will find the same bundle on some ultrabooks as well though, like the Sony Vaio Duo 13.

Hardware wise, the Surface Pro can be specced up to Intel Haswell Core i7 processors, 8 GB of RAM and 512 GB SSDs. Software wise, it runs a fully baked version of Windows 8.1 and thus all the standard software you’re already using on other Windows machines, and that puts it on par with any modern ultrabook.

The Surface Pro is also rated at up to 9 hours of battery life, which is comparable to what you’re getting with most ultraportable laptops these days. But we’ll see how that actually translates in real-life performances, I reckon we’ll be getting less from the beefier configurations, given how there’s a rather small battery inside this slim tablet.

A Core i5 / 4 GB / 128 GB SSD with the Type Cover will set you back a little over $1100 , and that’s a competitive price. Most premium 13 inch ultrabooks start somewhat higher than this, with a few exceptions, like the convertible Lenovo Yoga 2 Pro or the classic HP Spectre 13T-3000, to name just some of them. So price wise, the Surface Pro looks great. There are of course much cheaper ultrabooks you can buy these days, but those don’t exactly play in the same league as this Surface.

At the end of the day though, the Surface Pro is more or less a bump from the previous Pro models. The increased screen size is definitely an important change and alongside its other tweaks, like the revamped Type Cover and kickstand, longer battery life and fair price, the Surface Pro 3 is in my opinion a more interesting device than the previous Surfaces were.

It’s not necessarily meant for tablet use, although you can use it like that if you want to and it’s going to offer a more pleasant experience than the 13 inch 2-in-1 laptops do, since it is smaller and lighter. But the tablet experience is still hindered by the lack of proper apps, so if you look at it as a slate, the Surface Pro will not sound that great.

The Surface Pro could be an ultrabooks alternative for some of you, but regular laptops still have their fair share of aces

As a laptop replacement though, it might. It really depends on what you want from your device though. The Surface will handle movies, browsing and other everyday activities just as well as a regular laptop. You’ll just hold and use it differently. However, if you need the keyboard, the ports or the precision provided by a proper TouchPad, the Surface might not be what you want. But again, that’s highly subjective, so if this Surface Pro caught your attention, you might want to give it a try and see how it works for you.

Long story short, the Surface Pro can be, for some of you looking for a compact, powerful and long-lasting Windows based device, the tablet that could replace the laptop, ultrabooks or the Macbook Air. But at the same time, it might not, simply because you want a proper keyboard, a wide trackpad, ports or even the “lapability” and ease of use provided by a classic ultraportable. So as expected, each side has its own particularities, and to sum them all up in a single sentence: with the Surface Pro, you get the form factor and the sleek and light body at the expense of a few standard ultrabook features.

Disclaimer: Our content is reader-supported. If you buy through some of the links on our site, we may earn a commission. Learn more.
Andrei Girbea, Editor-in-Chief of Ultrabookreview.com. I've been covering mobile computers since the 2000s and you'll mostly find reviews and thorough guides written by me here on the site.
← Previous Story Apple acknowledges issues with keyboard design on MacBook and MacBook Pro
Next Story → HP Chromebook X360 12b and 14b with support for universal styluses (USI)