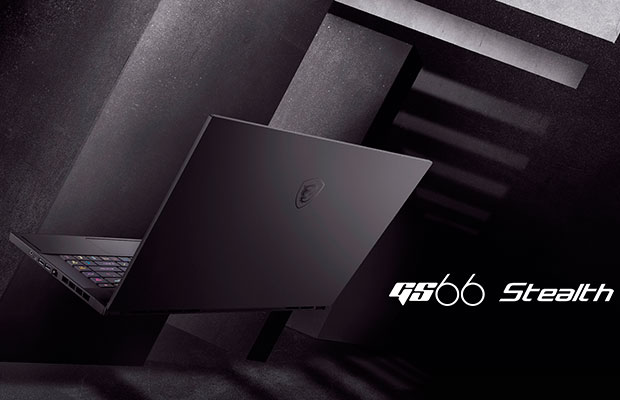 MSI are refining most of their gaming notebooks lineup for 2020, with revamped editions of the ultraportable GS Stealth series, the performance GE Raider and the budget-friendly GF65 Thin lines.

The MSI GS66 Stealth follows up the popular GS65 Stealth Thin from 2018/2019, which we’ve reviewed in its RTX 2080 version here on the site, but also in its larger GS75 implementation.

It builds on the same principles, as an ultraportable performance laptop with exquisite design lines, but this time around in a redesigned chassis. That’s great news, as the previous GS65 chassis felt rather weak and squeaky, despite MSI’s efforts to strengthen it in the 2019 update.

The GS66’s new build is boxier, similar to the Razer Blade and Asus ROG Zephyrus M.

Update: Our detailed review of the MSI GS66 is available here.

From what I can tell based on the preview-pictures and videos, it’s also marginally thicker and bigger than before, but cleaner as well, with a completely black theme and subtly integrated branding elements: a dark MSI logo under the screen and a dark Dragon Shield on the lid.

The entire hinge and back part have been redesigned as well, and I fear this approach no longer allows the screen to fall back flat to 180-degrees, which was a feature I appreciated on the GS65.

The keyboard, clickpad and IO haven’t changed much, with most ports still on the lateral sides, still no SD-card reader and one extra USB-C slot than before, which replaces the miniDP on the GS65. I’m also seeing a combined headphone/mic jack, instead of the dedicated jacks before, and IR cameras at the top of the screen, which the previous Stealth lacked.

Back to that keyboard, I did notice that MSI moved the Windows key to the left, like on most Windows notebooks, but also integrated the Power Buton as the top-right key, pushing the Delete key to the left. Not a fan, and something you’ll need to get used to if upgrading from an older MSI notebook.

The speakers fire through cuts in the palm-rest now, so we should hopefully see in improvement in the audio department over the GS65. Not sure about that positioning, though, as I fear they might be easily obstructed by our hands with daily use. There’s also still a mesh grill at the top of the keyboard, which I  expect that to be used for air intake like on the GS65.

As far as screen options go, it looks like this we’ll also get the newer 300 Hz IPS panel that’s been touted for the GE66 Raider series. Not that you should care, anyway, the previous 240Hz options were perfectly suitable for gaming, unless you’re playing shooters at a very, very competitive level.

Aside from the changes we can easily see, MSI further emphasizes on the updates they made beneath the hood. The GS66 gets a hardware bump to Intel’s 10th gen Core-H Comet Lake platform, the latest Nvidia GeForce RTX graphics (we can assume Super refreshes of the current 2060/2070MQ/2080MQ offers) and a 99.9 Wh battery, the largest legal capacity for flying. Furthermore, Power Delivery is now supported via USB-C, at up to 100W, but you’ll need to stick to the larger brick when running games and other demanding loads. 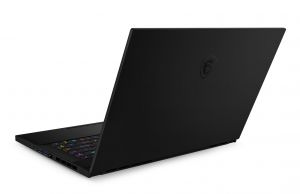 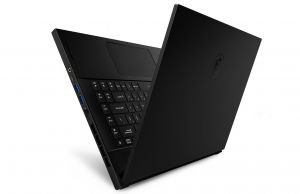 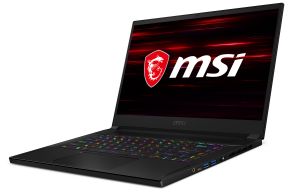 It’s too early to tell much about the performance, wait for our proper reviews for that. On the processor’s side, 10th-gen Comet Lake Core H is just a further refinement of the 14nm process, so I wouldn’t expect more than minor refinements and potentially higher-clocked speeds, as long as allowed by thermals. Also, keep in mind the GS66 is onyl available with either a Core i7-10750H (6Core) or an i9-10980HK (8Core), and not with the 8Core i7-1-875H processor included on most other ultraportables, so you’re being forced to upgrade to the i9 for those 8Cores, thus end up paying a significant premium that could make the GS66 less competitive than some of the other options. Wel’ll see.

This aside, MSI have redesigned the thermal module in the GS66 Stealth, opting for what they call a Cooler Boost Trinity+ design with three fans, very thin .1 mm fan blades and 10% increased airflow over the fans used in the GS65. This is another welcomed update, as the previous GS65 struggled in demanding combined loads due to high thermals and could only accommodate the 80W version of the RTX 2080 chip in its higher tier variant, while some of the competition was able to squeeze in the slightly faster 90W version in their 15-inchers.

RAM and storage haven’t changed much between generations, except for the slight bump to DDR4 2933 MHz memory with Comet Lake. The laptops is, however, a lot easier to upgrade now, as it’s a standard design that only requires you to take out the bottom to get to the components, and not the entire motherboard, as with the previous generations.

All in all, while we don’t have all the details yet, the GS66 Stealth seems to address two of the main GS65’s problems: build quality and performance/thermals. Add in a tuned fan-profile, easier hardware access, improved quality control, and more competitive pricing, and this could get very close to the top-pretenders in its class in 2019, the Asus ROG Zephyrus S and the Razer Blade 15, which won’t probably get more than a hardware bump in the first part of 2020.

No word on pricing and availability just yet, but we’re looking forward to reviewing the updated 2020 MSI GS66 Stealth Thin and share our findings with you, so stay tuned for updates.

Update: Our detailed review of the MSI GS66 is available here.

Disclaimer: Our content is reader-supported. If you buy through some of the links on our site, we may earn a commission. Learn more.
Andrei Girbea, Editor-in-Chief of Ultrabookreview.com. I've been covering mobile computers since the 2000s and you'll mostly find reviews and thorough guides written by me here on the site.
← Previous Story AMD TUF Gaming A15 FA506IU review (GTX 1660Ti 80W, Ryzen 5)
Next Story → AMD Ryzen 5 4600H benchmarks and review, vs Ryzen 7 4800H, Core i7-9750 and others