How to Fix Throttling on the Dell XPS 15 series 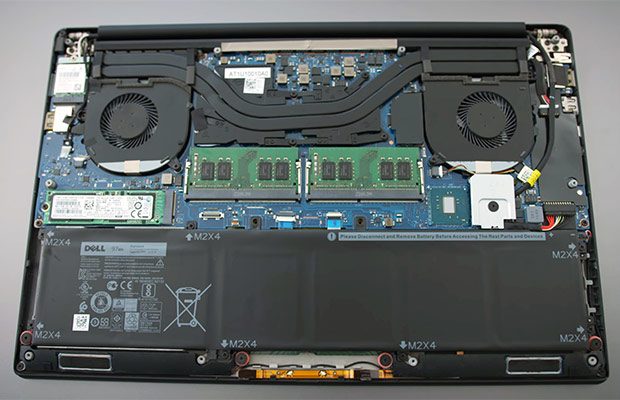 Without some hardware and software tweaks, your brand-new XPS 15 won’t be able to perform anywhere near its potential due to throttling.

In this article, we’ll tell you how to address this issue, but be aware that while this procedure works and is safe when done correctly, it may void your warranty or damage your computer if you don’t know what you’re doing. We’re just providing a guide and cannot be held accountable for your actions, so proceed at your own risk.

Note: Title has been changed to reflect that many of the XPS 15 generations benefit from the same solutions as the XPS 9560 exemplified in this article. I’ll update the contents if needed when I get a 9570 to test (already did, here’s the review, and here’s the review of the more recent XPS 9510 series and XPS 15 9520 model), but for now, these tweaks will work on most builds.

Before you begin the journey of optimizing your XPS 15, you’ll want the following: 1.5mm 6.0W/mK thermal pads, Thermal Grizzly Kryonaut (best thermal paste at the moment without resorting to the liquid metal variants), some highly pure rubbing alcohol, and some microfiber cloths.

The first type of throttling is quite straightforward to all but the most uninitiated: the CPU and GPU have temperature limits to prevent damage. Exceeding the temperature max (100C for CPU, 97C for GPU) will cause an instantaneous shutdown—but you should never see temperatures anywhere near that as the components will throttle their performance long before they get to that point.

There are softer limits than 100C and 97C for the CPU and GPU respectively, however. The GPU will reduce its clocks to keep its temperature below 78C, and the CPU will dynamically reduce its turbo clocks based on temperatures and power consumption.

The second type of throttling is also the result of heat, but because people generally look at CPU and GPU temperatures alone when benchmarking, it went undetected for a long time.

The VRM’s job is to convert 5 or 12V power from the adapter or battery into much smaller voltages to feed the CPU and GPU (generally 1.5v or less). A VRM has several components, but we are primarily interested in only two: MOSFETS (short for metal-oxide-semiconductor field-effect transistor, but you don’t need to know that for any reason except trivia) and chokes. The MOSFET is responsible for switching the voltage down to a manageable level to feed the CPU and GPU; the chokes stabilize the current.

In this image (courtesy of iunlock of Notebookreview), the MOSFETs and chokes have been identified with their temperatures under load. Throttling occurs around 78C. 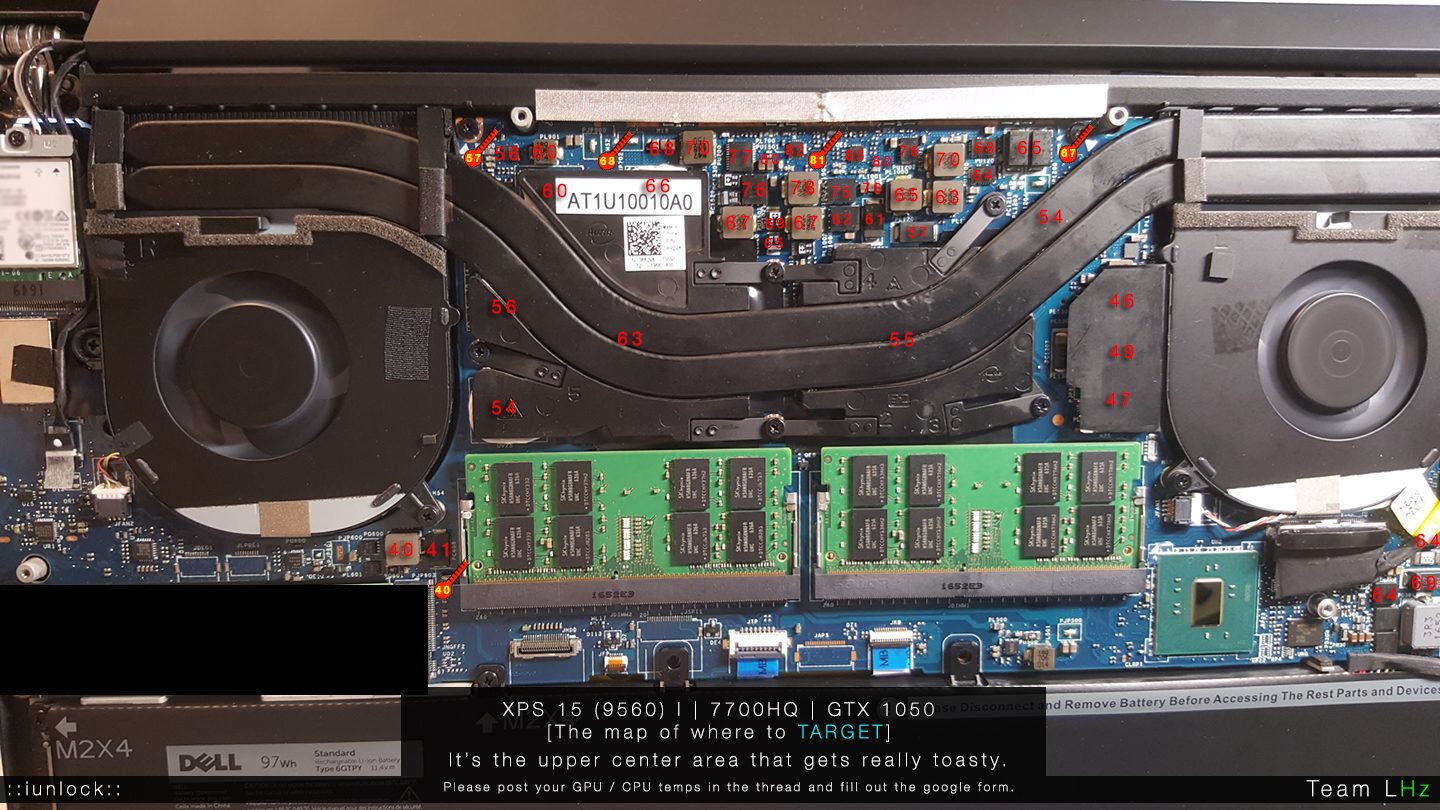 To get your XPS 15 to run at its maximum potential, we will need to solve both these problems. First, let’s take care of the CPU and GPU heat directly. For this, you’ll need your Grizzly Kryonaut, 99% rubbing alcohol, and those microfiber cloths.

The next step is using software called ThrottleStop to reduce the power consumption of your CPU. This can reduce the load wattage needed for the CPU by 10W easily. 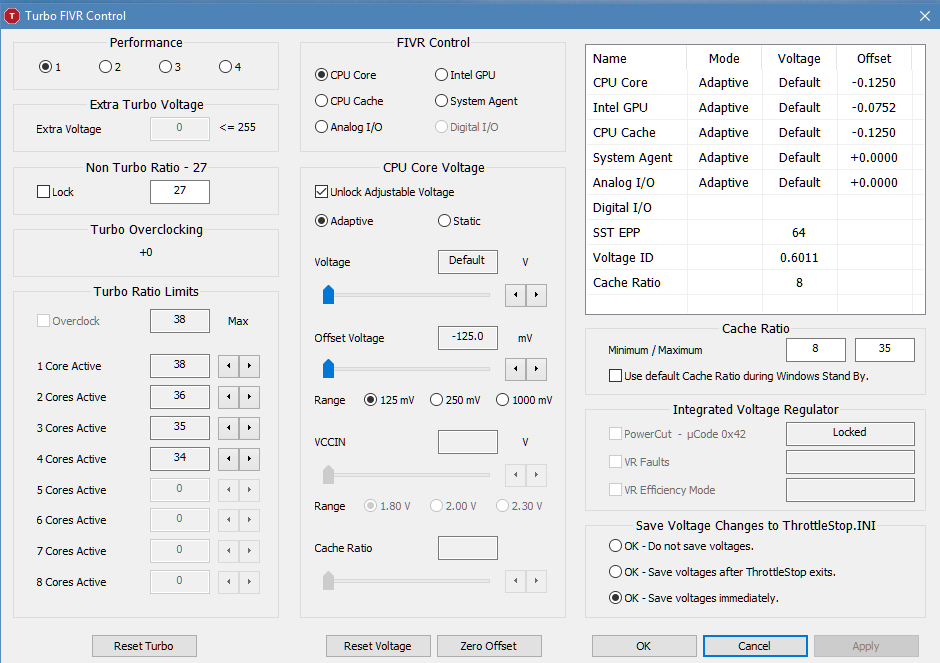 The final tweak to take care of your CPU and GPU temperatures is to go to the Nvidia Control Panel and change the “Maximum pre-rendered frames” value to “2”. This will prevent the CPU from needlessly being overtaxed to send data to the GPU. 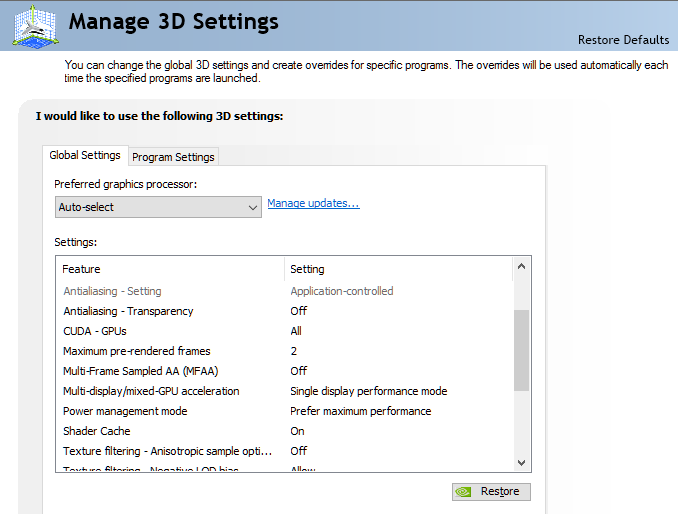 The next step is dealing with the temperatures of the VRM head-on. Take another look at this picture: 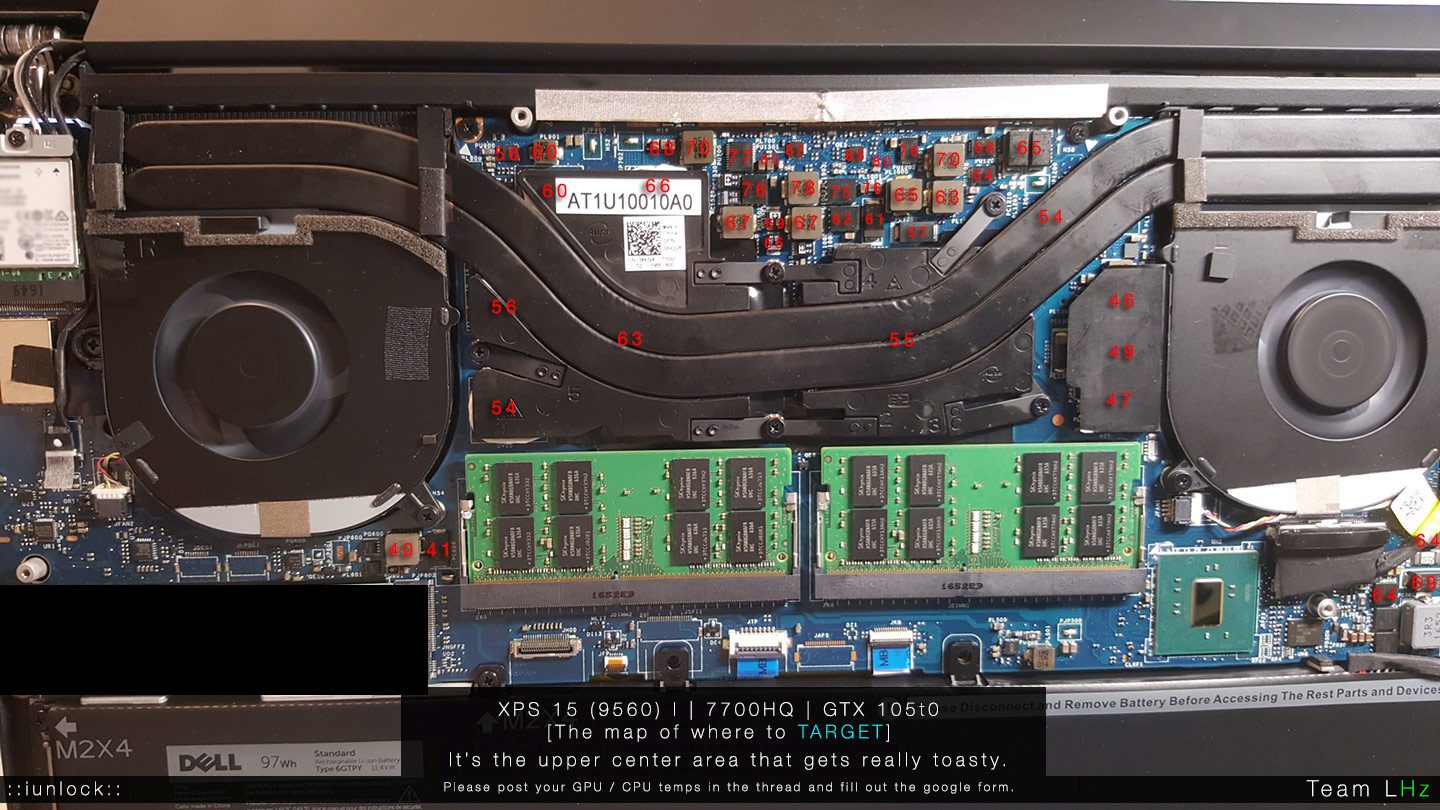 Our goal is to cool those MOSFETs with the highest temperature (above the heat spreader) so they don’t hit their throttling temperature. How? We will be using stacked thermal pads to connect the MOSFET to the aluminum bottom cover. Why? When the right type of pads are used, the bottom cover will wick heat away from the MOSFETs.

There is a trick to this, and it explains why we use lower-performing 6W/mK thermal pads instead of some very high-quality ones: if too much heat is transferred to the case it will actually end up heating up the VRM instead of cooling it. This is what will happen if you use an extremely conductive (16W/mK) thermal pad, and it’s why we want the 6W/mK pads for this purpose instead.

The mod is fairly straightforward: cut out small vertical strips from the thermal pad and place them on top of the MOSFETs above the heat spreaders. If you are using 1.5mm thick thermal pads, you will need to stack 3 of them on top of each other in order to reach the case. You want to leave as much open space around the pads so what little airflow there is doesn’t get impeded. 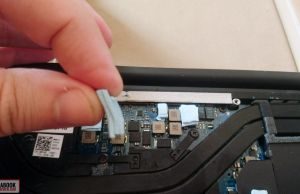 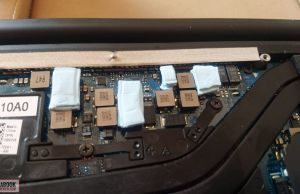 That’s it! Once you have stacked your little padded pillars over the MOSFETs and put the case bottom back on, you should be able to run any game or benchmark without VRM-induced throttling.

After following this guide, your Dell XPS 15 9560/9750 should now be a finely tuned beast of a machine, able to leap mountains in a single bound. If this guide helped you, please let me know in the comments and share this guide.

Disclaimer: Our content is reader-supported. If you buy through some of the links on our site, we may earn a commission. Learn more.
Douglas Black is a Technical Writer, Analyst, Teacher, and DJ currently based in North Carolina.
← Previous Story 2022 Lenovo Legion 7 and Legion 7i updates– AMD Ryzen 6000, Intel H55 Alder Lake & more
Next Story → MSI Prestige 15 review (2022 A12U model- i7-1280P, RTX 3050)