AMD Radeon Vega 8 vs 7 benchmarks and gaming results, vs Nvidia MX350 and MX250 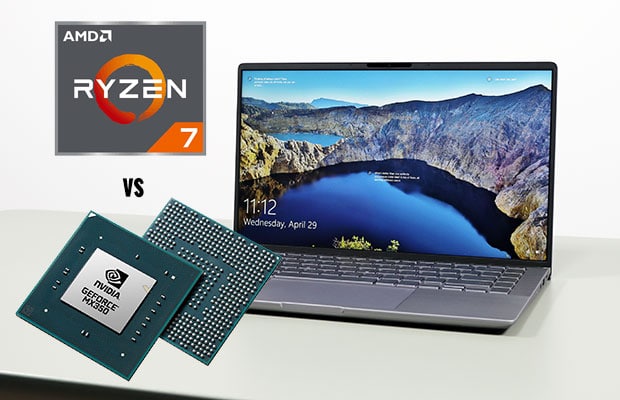 We’re reviewed a couple of AMD laptops in these last few weeks and I think it should be interesting to see how the Vega 7 and 8 graphics integrated with the Ryzen processors fare in benchmarks and games, as well as how they compare against Nvidia’s alternatives for ultrabooks, namely the MX250, MX330 and MX350 chips.

That’s especially interesting since many of the Intel-based ultrabooks of this 2020 generation are going to implement MX330 and MX350 Nvidia graphics, especially on the Comet Lake variants that still relly on mediocre 2016-level GT2 UHD integrated graphics.

Down in AMD’s camp, however, things are a bit different, as the Renoir Ryzen 4000 mobile platforms bundle some decent Vega 6, 7, and 8 integrated graphics, which could actually suffice for light and casual gaming by their own. Furthermore, some of the AMD configurations will also integrate Nvidia graphics, and it’s interesting to find out whether those AMD+Nvidia configurations are actually worth paying extra for.

With that in mind, the first part of this article focuses on the Radeon Vega 7 and 8 graphics, and we’ll talk about the MX250/MX350 alternatives further down.

Our findings are based on several Asus G14 configurations running on Vega 7 and Vega 8 graphics. I specifically disabled the Nvidia GPUs to see how these Vega 7/8 chips perform in an ideal implementation with an over-competent thermal module. I’ve also thrown in our results from the Ryzen 7 4700U ZenBook UM433 ultrabook with the same kind of Vega 7 graphics, but much more limited cooling, which is more in line with what you should expect from mid-tier AMD ultraportables. We’ve yet to test an ultraportable Vega8 or Vega 6 implementation, so we’ll update with that info later on.

Now, you should only take this article as a general reference of what to expect from these platforms, and make sure to go through our detailed reviews for more in-depth tests and analysis.

With that in mind, let’s have a quick look at the specs sheet.

The performance of these chips is going to vary significantly between implementations, as it’s highly dependent on each thermal and power design.

They perform flawlessly in something like the Zephyrus G14, with the iGPUs running at 1.75 and 1.6 GHz in games and tests, so these results are pretty much the best-case you can expect from these chips. However, they won’t run at full frequencies in most of the ultraportable Ryzen U implementations, as is the case with the ZenBook 14 UM433 and IdeaPad Slim 7 included here.

With that in mind, let’s look over some benchmark results:

The Zenbook is within 10-20% of the G14 implementations in these tests, which is definitely not bad. But the gap widens in more demanding CPU + GPU loads, such as demanding real-life games.

We ran a couple of DX11, DX12, and Vulkan titles on the best-performance profiles available in each case and FHD resolution/lowest graphics settings. Here’s what we got:

The G14 Vega 7/8 implementations run flawlessly, as illustrated in the following logs. 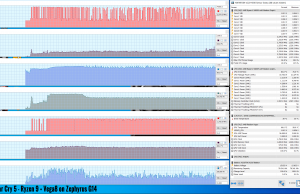 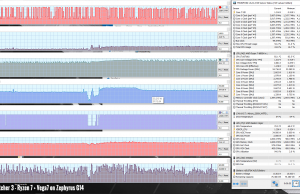 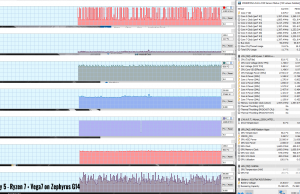 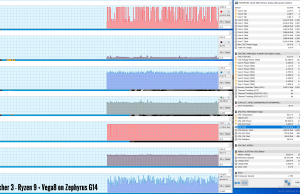 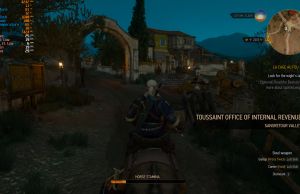 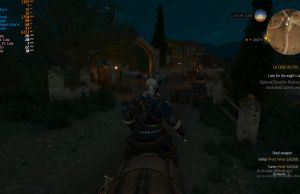 The Zenbook 14 ultraportable implementation, on the other hand, clocks down aggressively to .95 – 1.2 GHz in the more demanding titles, such as Far Cry 5 or Wicher 3. 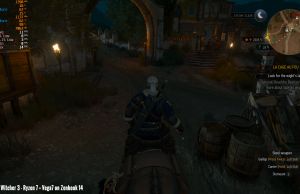 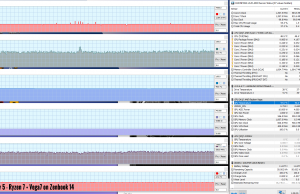 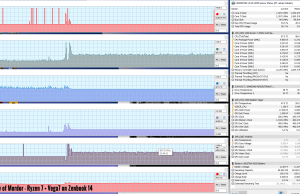 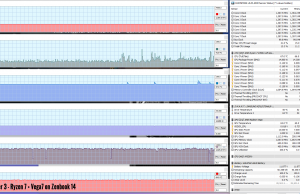 Simpler titles such as Dota2 run well even on the ZenBook 14, but even in this case, there’s a noticeable difference between playing with Low or High settings.

Furthermore, titles like Red Dead Redemption can’t even start on any of these AMD chips, due to their limited memory buffer. So you shouldn’t realistically expect to play the latest AAA games on these Vega integrated GPUs, there’s only so much they can do. In fact, you shouldn’t expect to play them on the MX350/250 models either.

Older games or simpler titles such as Fortnite, LOL, Dota, Minecraft, and the likes should play well at FHD resolution with low-to-medium settings.

Here’s a quick specs sheet of the Vega7 chip next to the Nvidia MX250, 330, and 350 options. The specs are in there for a better look at the Nvidia options, as there’s no point comparing the two architectures specs-wise, although the Processing Power row gives you a ballpark idea of how these fare against each other.

Among those Nvidia options, the MX330 is a rebadged MX250 from last year, but the MX350 is a different GPU based on the GP107 chiplet, thus the most competent option here.

The thermal module pays an even more important role in MX implementations, though, as it also has to handle the extra power of these Nvidia chips.

Here are some benchmark scores:

The MX350 comes on top in most tests, even in this thermally limited ZenBook 14 implementation, and it should score higher in a better-cooled design. The Vega 7 and 8 chips beat the MX250 implementation, though, and they should outscore the similar MX330 as well.

Now let’s look at some games. We ran the same DX11, DX12, and Vulkan titles as before, on the best-performance profiles available in each case and FHD resolution/lowest graphics settings. Here’s what we got: 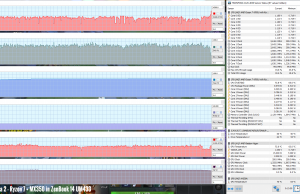 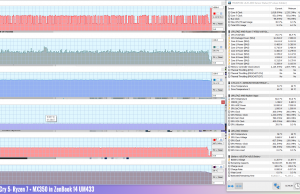 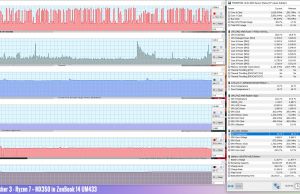 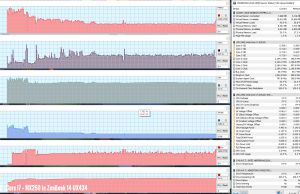 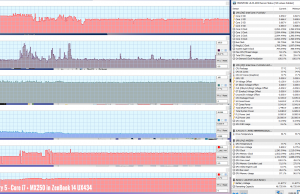 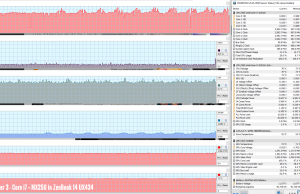 The Vega8 scores high as well and even outmatches the MX350 in the more demanding titles, but don’t forget that’s on a Ryzen 9 configuration, so the increased CPU power and the competent thermal design play a major role in those scores. A regular Ryzen U 4800U + Vega8 ultraportables won’t score as highly. On top of all these, I’d also expect the MX350 to score better in ultrabooks with superior cooling, further winding the gap between it and the Vega options.

In conclusion, Nvidia MX350 configurations should be your number one choice if interested in compact ultrabooks with some gaming prowess at around the $800-$1200 mark. Still, GTX 1650Ti configurations are also available in a few ultraportable formats, and would offer a significant boost in most games. Those tend to sell for more, though, as they’re implemented in devices such as the Zephyrus G14, MSI Prestige 14, or the premium and pricey Razer Blade Stealth.

At the same time, Ryzen 5 and 7 based ultrabooks offer a competent alternative for the Intel + MX250/330 models in the lower price brackets, most likely with increased efficiency and lower temperatures, so these are definitely something to keep an eye on. Just make sure to read proper reviews to figure out how the particularities and quirks of each implementation, so you’ll know what you’ll be getting into.

Disclaimer: Our content is reader-supported. If you buy through some of the links on our site, we may earn a commission. Learn more.
Andrei Girbea, Editor-in-Chief of Ultrabookreview.com. I've been covering mobile computers since the 2000s and you'll mostly find reviews and thorough guides written by me here on the site.
← Previous Story Asus Zenbook 14 UX434FLC (Intel Core i7) vs UM433IQ (AMD Ryzen 7) compared
Next Story → Asus ZenBook 13 UX325 vs ZenBook 14 UX425 compared