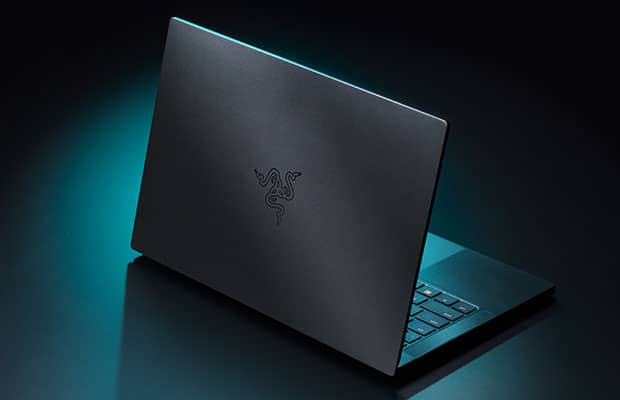 Razer’s Blade Stealth is the most compact gaming-ultrabook money can buy right now, but the 2019 model cut a few corners.

We’ve reviewed it here on the site and our main complaints were the limited CPU performance in taxing loads, the squashed keyboard layout, the 60Hz-only screen option (not ideal for a gaming notebook), as well as the high-pricing that didn’t pair up with these quirks.

Razer listened to these complaints and pretty much all of them seem to have been addressed on the 2020 update of the Blade Stealth 13, which is available as of April 21st in the US/Canada and will soon come to the other regions. It’s still expensive, that hasn’t changed, as it starts at 1799 USD/1999 EUR for the FHD screen option, and 1999 USD/2199 EUR for the 4K touch version.

Here’s a quick specs sheet of the 2020 and 2019 models side by side, and we’ll further touch on the changes down below.

However, this is now set to run at 25W on the higher performance settings, instead of being limited to 15W. In fact, the 2019 Stealth did allow the CPU to run at 25W if you opted to disable the GPU, but the thermal design could not cope with that much power while the Nvidia GPU was also active. I’d reckon Razer had to redesign the thermal module in order to properly cool a 25W CPU + 35W GPU in such a small chassis, and hopefully did a good job at it. That’s something we’ll only be able to judge once we spend more time with the product, so look forward to Derek’s review shortly.

The 25W CPU should primarily show its strength in CPU-heavy loads such as image/video rendering or programming software, making this updated Stealth a more capable mini-workstation. It’s still a 4C/8T Core U processor though, so if this sort of multi-threaded performance is what you’re after and can live with a slightly larger 14-inch product, the AMD Ryzen 4000 HS models out there should definitely be on your radar as well. We’ll touch on them further down.

Back to the 2020 Stealth, as far as the dGPU goes, it gets the updated GTX 1650Ti MaxQ (35W) chip from Nvidia, which is very similar to the pre-existing GTX 1650 in the Blade Stealth 2019, but with GDDDR6 VRAM memory. That should translate in 5-15% performance increase in certain titles, but you should still not expect more than FHD gaming with medium, and even low settings in recent games from this sort of configuration. Nonetheless, the higher power CPU will further alleviate the bottleneck caused by the 15W CPU in the 2019 Stealth in CPU-heavy titles, which could lead to an even greater boost in fps in these games. However, the gaming experience is limited by the form-factor with this sort of ultrabook, and that’s just something you need to accept when shopping for such a product.

The 120 Hz FHD screen option offered for the updated Blade Stealth further narrows the gap to the 15-inch gaming ultraportables. Previously, the Stealth was only available with 60 Hz panels, and that’s changing now, this being the only option with a faster display in the 13-inch class. However, I’d wait for the final reviews before getting overly exciting and especially look into the response times.

Asus have also pushed a 120 Hz screen in their 14-inch Zephyrus G14, another first in that segment, but the rather slow response time translated in some ghosting in fast-paced games. Of course, tearing and ghosting on these 120 Hz options are not as severe as on the 60 Hz versions used in the past, but they’re still no match for the 15-inch screens with 144+ Hz refresh and 3ms response (with overdrive) available on larger performance ultrabooks.

Finally, Razer have also tweaked the keyboard on this product, with a redesigned arrows/right-shift layout, the standard approach most OEMs use for this section these days, with smaller up/down arrows and a full-size Shift. The glass clickpad is still the same, and one of the better in the Windows space. 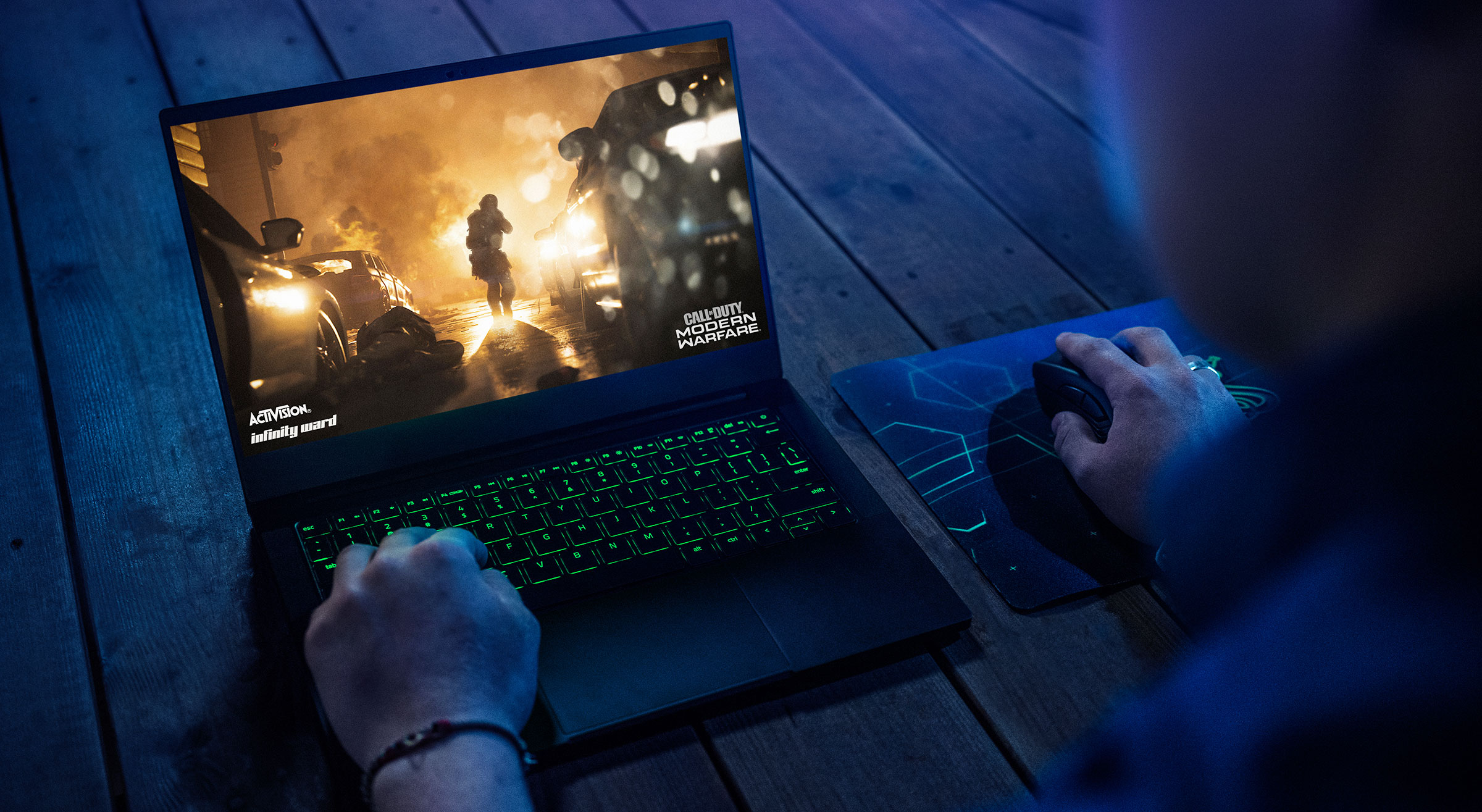 Not much else has changed on the 2020 Stealth 13, but it didn’t have to, as Razer already nailed most of these other aspects with their 2019 product.

The build is still among the best in the business, with the premium unibody aluminum chassis, there’s still a 53 Wh battery inside and USB-C charging from a compact 100W power brick, a Hello camera at the top of the screen, as well as pretty good up-firing speakers, flanking the keyboard. The IO is still somewhat limited, though, with only USB-A and C, so you’ll still need to use adapters to connect to an external monitor or an SD-card in your camera.

To sum this up, Razer undoubtedly improved their Stealth 2020 with this generation, addressing most of our complaints of the 2019 version. However, something significant has happened in this segment in the meantime, with the launch of AMD’s spectacular Ryzen 4000 mobile platform, so while the Stealth 13 is still the most capable performance/gaming ultrabook in the 13-inch segment, there’s now a significantly more powerful option in the 14-inch class, and others might be launched in the months to come. I expect this to force Razer to cut on those Stealth 13 prices to stay competitive and still attract at least some of the power users looking for performance in a compact footprint, and even that might not be enough, given the options with team Red.

The Zephyrus G14 is, for now, the only premium AMD-based ultraportable available in stores, so pretty much the closest alternative to the Blade Sealth 13 2020.

It is nonetheless a slightly larger and heavier product, so the Stealth still has the portability factor on its side. But it’s not a lot bigger or heavier. We don’t have a Stealth around for comparison, but the Stealth is about the same size as the 13-inch MacBook Pro (source), and here’s how that compares to the Zephyrus G14.

The Stealth is also the nicer crafted and more premium product of the two, as well as offers marginally nicer inputs, especially thanks to that larger clickpad, as both are otherwise good typers. Razer does include RGB and brighter/more uniform illumination on their unit, while the G14 only gets white and more washed-out lighting.

However, as a larger product, the Zephyrus G14 also gets a larger 14-inch screen, more ports (but without Thunderbolt 3), a larger 76 Wh battery, and significantly more powerful hardware. Here’s a specs sheet of the two.

AMD did a tremendous job with their Ryzen 4000 platform, and the HS APUs included in the G14 are their cherry-picked options. With a TDP of 35+W in sustained loads and 8C/16T, expect the Ryzen 9 4900HS/Ryzen 7 4800HS to demolish the Intel i7-1065G7 in the Blade in pretty much every demanding task (here’s a detailed review of the 4900HS G14 configuration), except for the very few that favor Intel builds, such as video-editing in Premiere, where Quick Sync should help narrow the gap. Even the 6C/12T Ryzen 5 4600HS included on the base-tier variants outperforms the Intel IceLake CPU by a huge margin.

We’ll further compare the two once we get to properly review the Blade Stealth, but it’s obvious that the G14 is the higher-performance option here, and most likely the better value performance-ultraportable. With the Stealth, you’re paying a premium for the excellent craftsmanship and the more portable form-factor, in still the most capable performance/gaming ultrabook in the 13-inch segment, but it’s up to you if that premium is worth it, given the options now available in the 14-inch class.

Disclaimer: Our content is reader-supported. If you buy through some of the links on our site, we may earn a commission. Learn more.
Andrei Girbea, Editor-in-Chief of Ultrabookreview.com. I've been covering mobile computers since the 2000s and you'll mostly find reviews and thorough guides written by me here on the site.
← Previous Story Dell XPS 13 9300, 2020 model – what to expect, vs XPS 13 7390
Next Story → Intel & OEMs are disabling undervolting. Here’s how to re-enable it