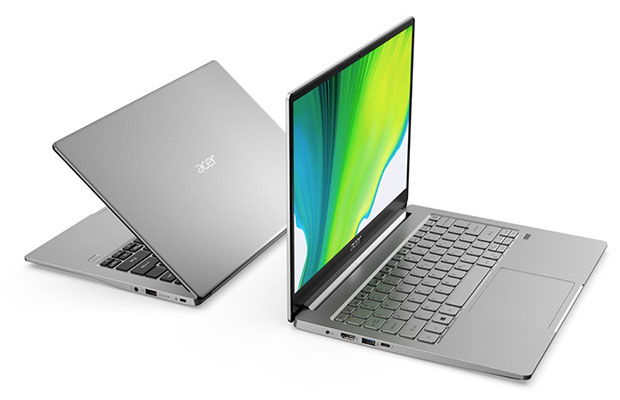 Acer offer a handful of new Swift 3 series for 2020, built on two of the important hardware platforms available for ultraportable laptops at the beginning of this year: AMD Renoir Ryzen 7 4000 Mobile Series (7 mm) and Intel’s 10th gen Ice Lake Core U (10 nm).

Choosing between these platforms, and the Swift 3 lines, requires a fair bit of research, as each has its particularities.

In few words, Ryzen 7 chips mostly make their way in budget and mid-range products, while Intel IceLake is reserved for higher-tier ultrabooks, but it is not necessarily the fastest or the most efficient of the two (or even the three, if we’re also considering the 10th-gen Comet Lake 14nm that also powers some mid-range ultraportables, like the VivoBook S14, for instance). However, IceLake tends to be a part of more premium products with design aspects and features not available for the lower tiers.

With that in mind, down below we’ll explain to you the 2020 Swift 3 series, built on these platforms. We’ll go over their particularities, but first, here’s a quick specs sheets: 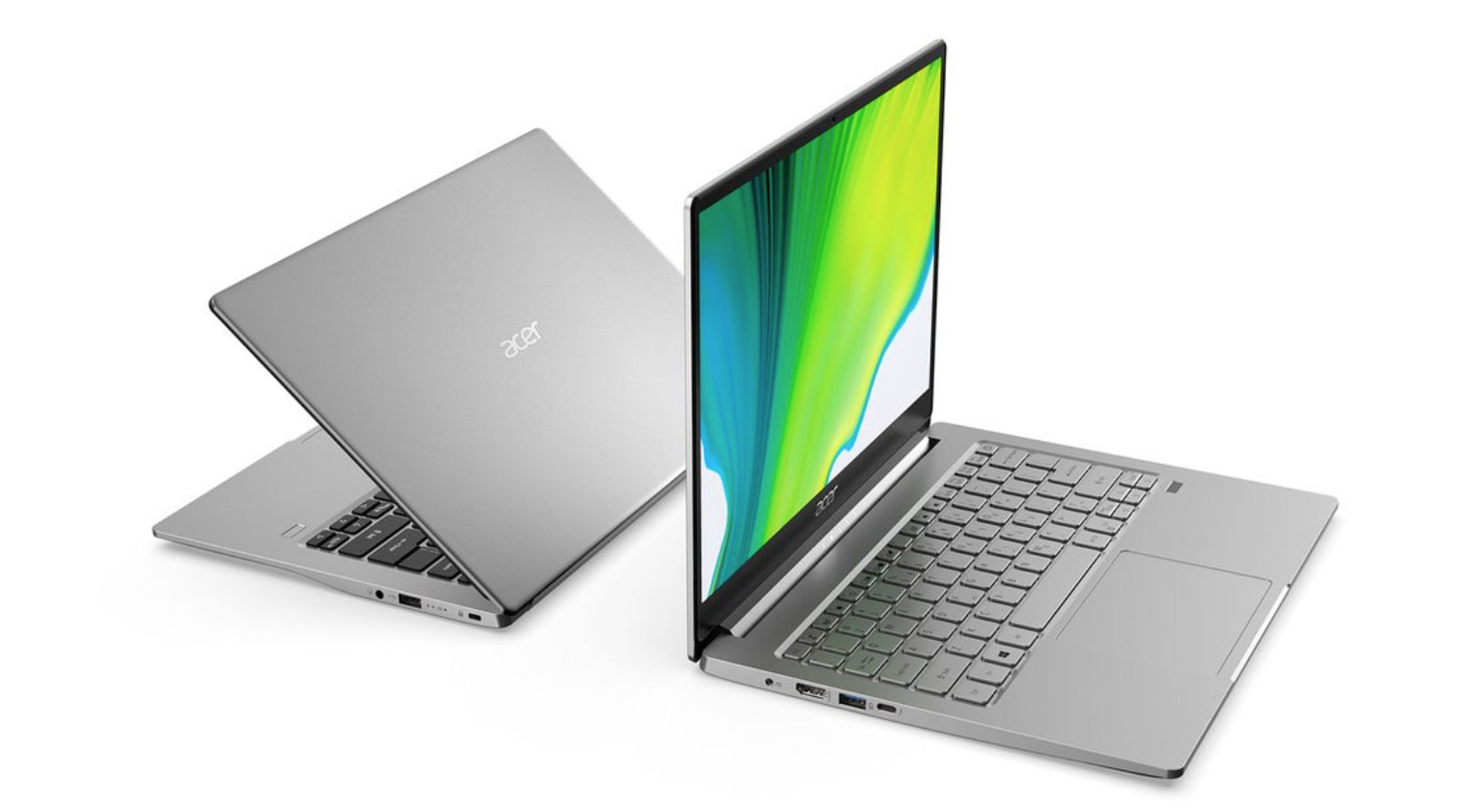 14-inch options with either Intel/AMD hardware

The Swift 3 SF314-42 and SF314-57 are identical in every way, except one is built on AMD Ryzen 7 and another on Intel IceLake Core hardware. Our detailed review of the Intel-based Swift SF314-57 version is available over here.

In a few words, though, this a competent mid-range ultrabook. A mix of magnesium-lithium and magnesium-aluminum materials are used for most for the entire outer-case, lid, interior and bottom. They don’t feel as premium as regular aluminum to the touch, but those alloys are very strong and the laptop is solid and well made. They also do a very good job at repelling smudges and finger-oil. 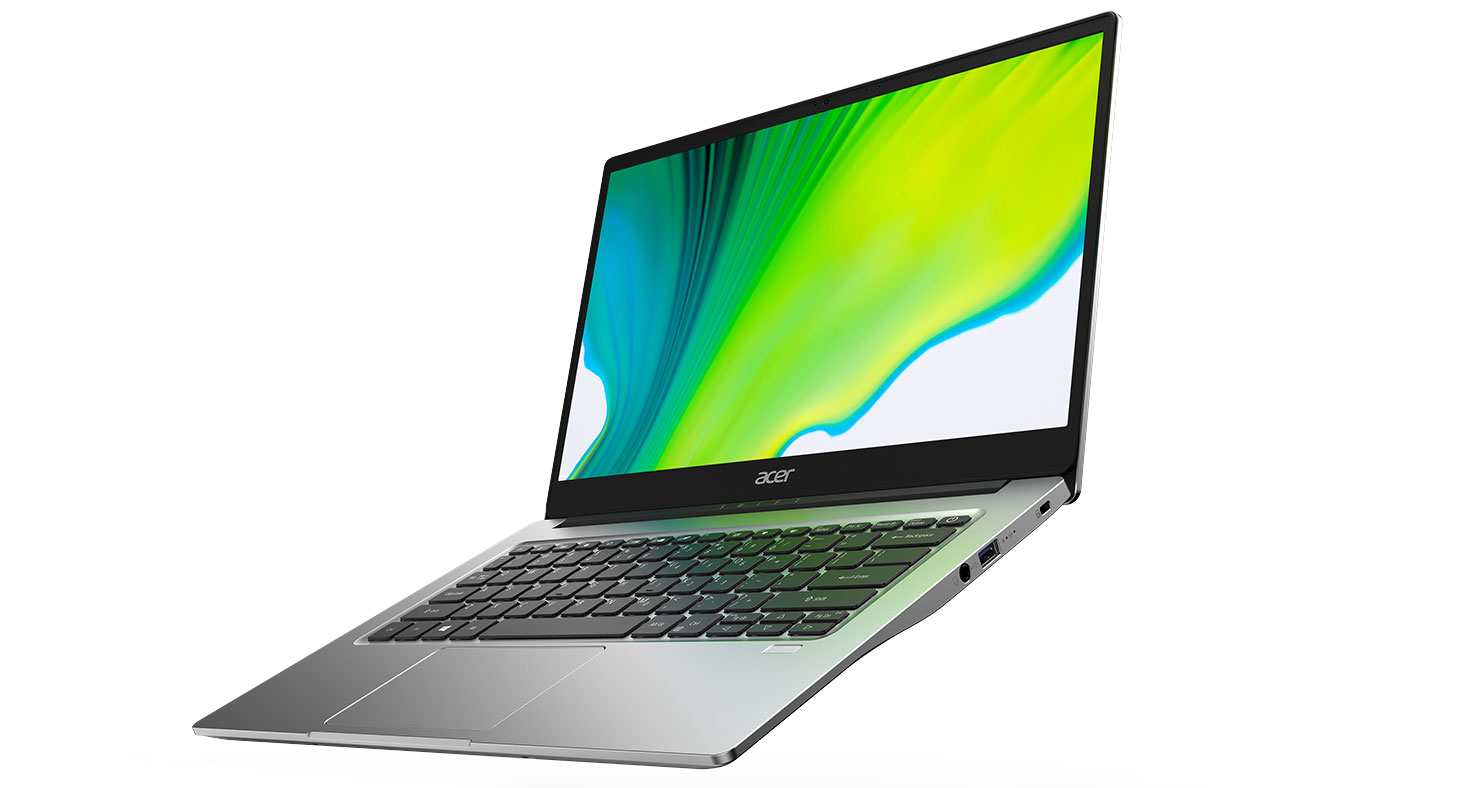 As far as the IO goes, both get USB-A and HDMI ports, but Thunderbolt 3 is only available on the Intel version, and placed by a USB-C gen2 connector on the AMD model. Neither versions can charge via USB-C, though.

The keyboard is standard for Swift 3 laptops, so OK for casual use, but be aware Acer offers both backlit and non-backlit versions, make sure yours gets the backlit variant.

The screen is a rather mediocre 14-inch 16:9 Chi Mei N140HCA-EAC panel, the kind we’ve seen on past Acer and Asus mid-range ultraportables. It’s not very bright and rather washed out, at about 220-nits at max settings, 800:1 contrast and 65% sRGB coverage.

The performance, thermals and noise levels are OK. Our review unit is the mid-range Core i5-1035G1 model, a slight bump from the previous Core i5 versions in tests and especially in graphics benchmarks, as detailed in this separate article. That’s mostly due to the Gen11 Intel iGPU and LPDDR4x support, as the performance per core hasn’t improved, and nor has efficiency.

Higher tier configurations get the Core i7-1065G7, which includes Intel Iris Plus G7 graphics with 64 EUs, twice the amount of the G1 in the i5 and third the amount of the Intel UHD 630 bundled with the WhiskeyLake Core i7-8565U processor. This will show its worth in demanding GPUs loads, such as data processing and video decode/encode, but also in games. However, the G7 is still not even on par with the MX250 on some ultraportables, so don’t expect much in terms of gaming. You can, however, opt for an MX250 or MX350 dGPU on the Swift 3 SF314-57, but that would make little sense on an IceLake build and would affect thermals/noise, so better stick with the previous Swift 3 if you’re after a 14-inch ultrabook with that sort of graphics performance.

For comparison, the AMD Ryzen 4000 variant promises all-out improved performance, with Ryzen 3 4300U 4C/4T, Ryzen 5 4500U 6C/6T, and Ryzen 7 4700U 8C/8T processors, as well as faster Ryzen 7 Vega graphics. The jump to 7nm, alongside various IPC and design improvements, allowed AMD a significant 2x performance boost from the Ryzen 3000 APUs, within the same 15W envelope, so expect these to demolish their Intel counterparts in multi-threaded loads. AMD is also promoting +28% GPU gains over the Intel Iris Plus G7 implementation, as well as improved efficiency. I still expect Intel platforms to have an edge on battery life with daily use, but the gap should be much smaller than with the 2019 platforms.

AMD Renoir is only scheduled for late-Spring 2020, so not an option if you’re after a laptop in the first part of the year. In comparison, the IceLake based Swift 3 SF314-57 is already shipping in most regions, starting at $599/599 EUR, which is also the touted start price for the AMD version. However, I expect big discounts on the Intel models in the second part of the year if the AMD platforms actually deliver on all their promises.

The 13-inch Acer Swift 3 SF313-52/G is a slightly different product, a Project Athena Windows laptop with the 13.5″ 3:2 screen, similar to the ones we’ve seen on last year’s Chromebook Flip Spin 13 and Huawei Matebook 13. it’s still a clamshell notebook, though, so the screen is matte and without touch.

Update: Our detailed review of the Swift 3 SF313-52 version is available over here.

It’s still about the same weight and footprint as the 14-inch variants, due to the taller screen, and gets the same construction, design lines, and keyboard. It also gets fair IO, with Thunderbolt 3, USB-A and HDMI. The keyboard is silver, though, unlike the black implementation on the 14-inch variants, which I prefer due to the improved contrast with the switched-on white key-backlighting. 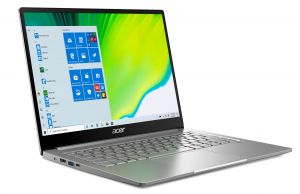 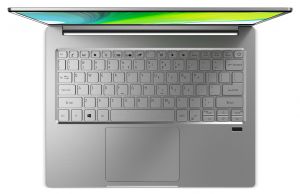 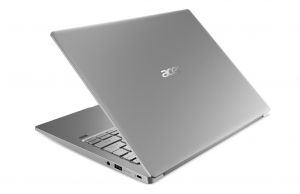 The Swift 3 SF313-52/G is exclusively built on Intel IceLake hardware, so it looks like Intel are still winning the higher-tier SKUs, something AMD have deeply struggled with in the past. I’d reckon that might change towards the second part of 2020 and in 2021, if Renoir delivers and Intel doesn’t strike back hard with Tiger Lake, but we’ll see. For now, though, don’t expect AMD Ryzen-U in most high-tier ultraportables.

Acer also taunt faster storage support for this 13-inch Swift 3, a bigger 56 Wh battery, and optional Nvidia graphics on the SF313-52G variants. No details on what this mysterious chip could be, but I expect some sort of follow-up for the current MX250 available in similarly sized products. Update: That’s the GeForce MX350, a significant step-up from the previous MX150/MX250, that should improve the performance with games at the screen’s 60% higher than FHD native higher resolution, where the MX250 struggled, based on our findings on the very similar MateBook 13 ultrabook.

All in all, I’d say the 2020 Swift 3 ultraportable lineup remains competitive, with good features and aggressive pricing that could be enough to compensate for the rather mediocre keyboards and screens on the 14-inch variants. The 13-inch model is especially interesting for its 3:2 matte display and big battery, an excellent mix for productivity in a small envelope. However, if Renoir ends-up as dominating as it promises, some of you might look past it for being solely built on Intel IceLake hardware.

Look forward for our updates and detailed reviews in the months to come.

Disclaimer: Our content is reader-supported. If you buy through some of the links on our site, we may earn a commission. Learn more.
Andrei Girbea, Editor-in-Chief. I've been covering mobile computers since the 2000s and you'll mostly find reviews and thorough guides written by me here on the site.
← Previous Story Dell G5 15 SE with AMD Ryzen 9 4900H and Radeon RX 5600M graphics
Next Story → Eluktronics MAX-15/MAX-17 – lightest full-performance gaming laptops, vs MAG 15 and MECH 15/17