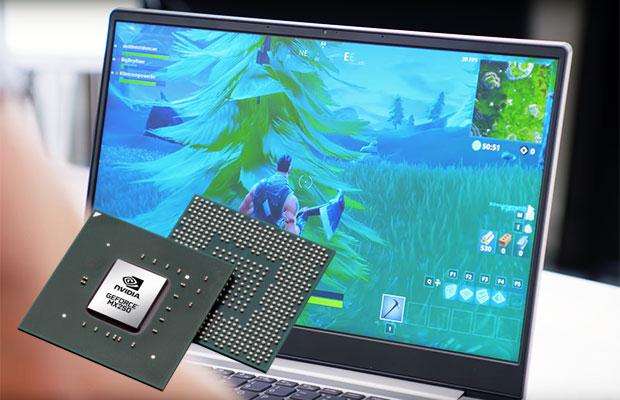 This article explains what to expect from laptops with Nvidia MX250 and MX230 graphics chips, how these GPUs compare to the popular MX150, as well as provides a complete list of portable devices bundled with these chips.

Update: 2020 laptops now get an option for an MX350 dGPU, a more capable direct successor of the MX250. Follow this link for more details.

Both are entry-level dedicated GPUs designed as more capable alternatives to the Intel UHD graphics integrated within the Intel Core U processors.

As solutions for thin-and-light notebooks and ultrabooks, these are made with efficiency in mind and have low power requirements, which makes them suitable for compact builds. At the same time, they are also more affordable than the higher-tier Nvidia GPUs, so you’ll also find them in a handful of affordable full-size laptops.

Exact details are still scarce on the two, but we do know that they’re both based on Nvidia’s GP108 14-nm chip, so you can summarize them as slightly higher-clocked versions of the GeForce MX150 GPU. That means you should not expect the MX250 to run significantly faster than the MX150, while the MX230 should squeeze in somewhere between the two, but with a slightly higher TDP and cheaper price.

We’ll update with benchmark results and performance expectations once we get to review MX250/230 laptops, but for now, we’ll leave you with the specs sheets, then jump to the list of actual products built with these chips.

Update: We’ve covered the performance of the GeForce MX250 1D13 GPU in this separate article.

Based on these specs, I expect the MX250 and 230 to perform similarly to their predecessors, with the main difference between the generations being the slight increase in Clock and Memory Speeds, and the addition of support for Vulkan 1.1, OpenGL 4.6 and OpenCL 1.2.

On top of that, Nvidia will offer different versions of both these chips, just like with the MX150s: a lower power option for ultrabooks, with a TDP of 10-15 W, and higher power alternatives for full-size devices, with TDPs of around 25-30 W.

As far as gaming goes, expect to be able to run less-demanding titles and older games at FHD resolution and Medium/Low details, while for AAA titles you’ll pretty much have to go to HD resolution to get 30+ fps.

Down below we’ve compiled a list of laptops built on Nvidia MX250 and Mx130 laptops. Very few such devices have been announced at this point, but we’ll constantly update the tables and fill them up with the new launches as they come out.

Update: Many of the 2020 laptops in this segment now get an option for an MX350 dGPU, a more capable direct successor of the MX250. Follow this link for more details.

Here’s a short glossary of the terms mentioned above:

That’s about it for now, but as I’ve mentioned in the beginning, this article is a work in progress and I’ll be adding new products as they are released, so bookmark this for updates if interested on the topic.

That aside, if these Nvidia GeForce MX250 and MX230 laptops don’t offer the performance you want, you should also check our lists of more powerful laptops with Nvidia GTX 1050/1050Ti , GTX 1060 graphics or the newer RTX 2060 options.

Disclaimer: Our content is reader-supported. If you buy through some of the links on our site, we may earn a commission. Learn more.
Andrei Girbea, Editor-in-Chief. I've been covering mobile computers since the 2000s and you'll mostly find reviews and thorough guides written by me here on the site.
← Previous Story Laptops with Nvidia RTX 2080 / 2080 Max-Q graphics (complete list)
Next Story → Laptops with Nvidia RTX 2070 / 2070 Max-Q graphics (the complete list)