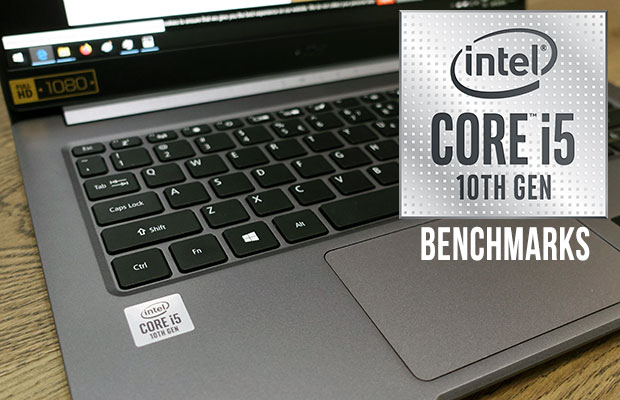 In this article, we’re taking a look at the Intel Core i5-1035G1 processor, the mid-range CPU in Intel’s IceLake platform designed to power most mid to high-tier ultrabooks throughout 2020.

However, Ice Lake processors are available side-by-side with 14nm Comet Lake processors, and both are called 10th gen platforms, that’s why choosing the right option for your needs and budget can get confusing.

We’ll explain the differences between the Core i5-1035G1 (Ice Lake) and Core i5-10210U (Comet Lake) below, as well as how these two 10th gen processors fair against previous platforms, namely the Whiskey Lake Core i5-8265U and the AMD Ryzen 5 3500U. We’ll also touch on all the Core i7 options in a separate article.

Before we get to talk about the performance and particularities, let’s go through this summarized specs sheet. 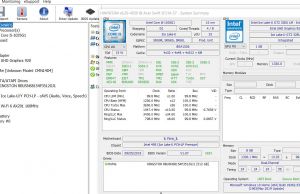 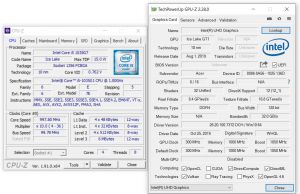 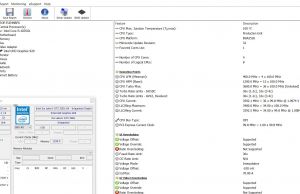 There are a few main things you should take out of these specs lists: 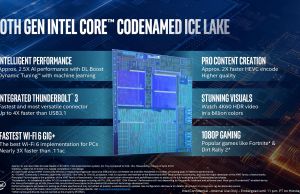 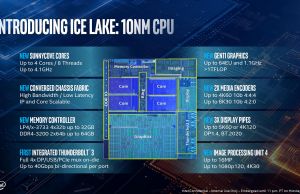 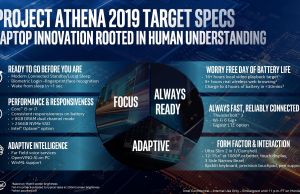 Before we proceed it’s important to understand that manufacturers are able to tweak the power allowances for each notebook. With the i5-1035G1, the PL1 limit can vary between 13 and 25 W, and higher power implementations will be able to run at higher frequencies, thus perform better in demanding CPU loads.

However, most 13/14 inch ultrabooks will get the standard 15W i5-1035G1, and that’s what we’ve used in our tests as well. The results in this article are based on the 14-inch Acer Aspire Swift 3 SF314-57, configured with the Core i5-1035G1 processor, 8 GB of LPDDR4 memory and 512 GB PCIe x2 SSD storage, a mid-range ultraportable with standard hardware/thermal designs. I expect higher tier implementations to score slightly better in some tests, while the 25W variants that will make their way inside some of the 15-inch notebooks will score even higher.

Here are a handful of CPU benchmarks results:

Overall the i5-1035G1 fares well against the other options. It looses to the higher clocked Comet Lake i5-10210U in some of the tests, but comes on top in others due to the faster memory.

Like with most modern processors, the performance drops with longer loads, as you can see from the Cinebench loop test illustrated below. The CPU kicks in hard for the first runs, and then settles at lower frequencies once the heat builds up. This test also shows that undervolting helps a fair bit with this sort of demanding loads. 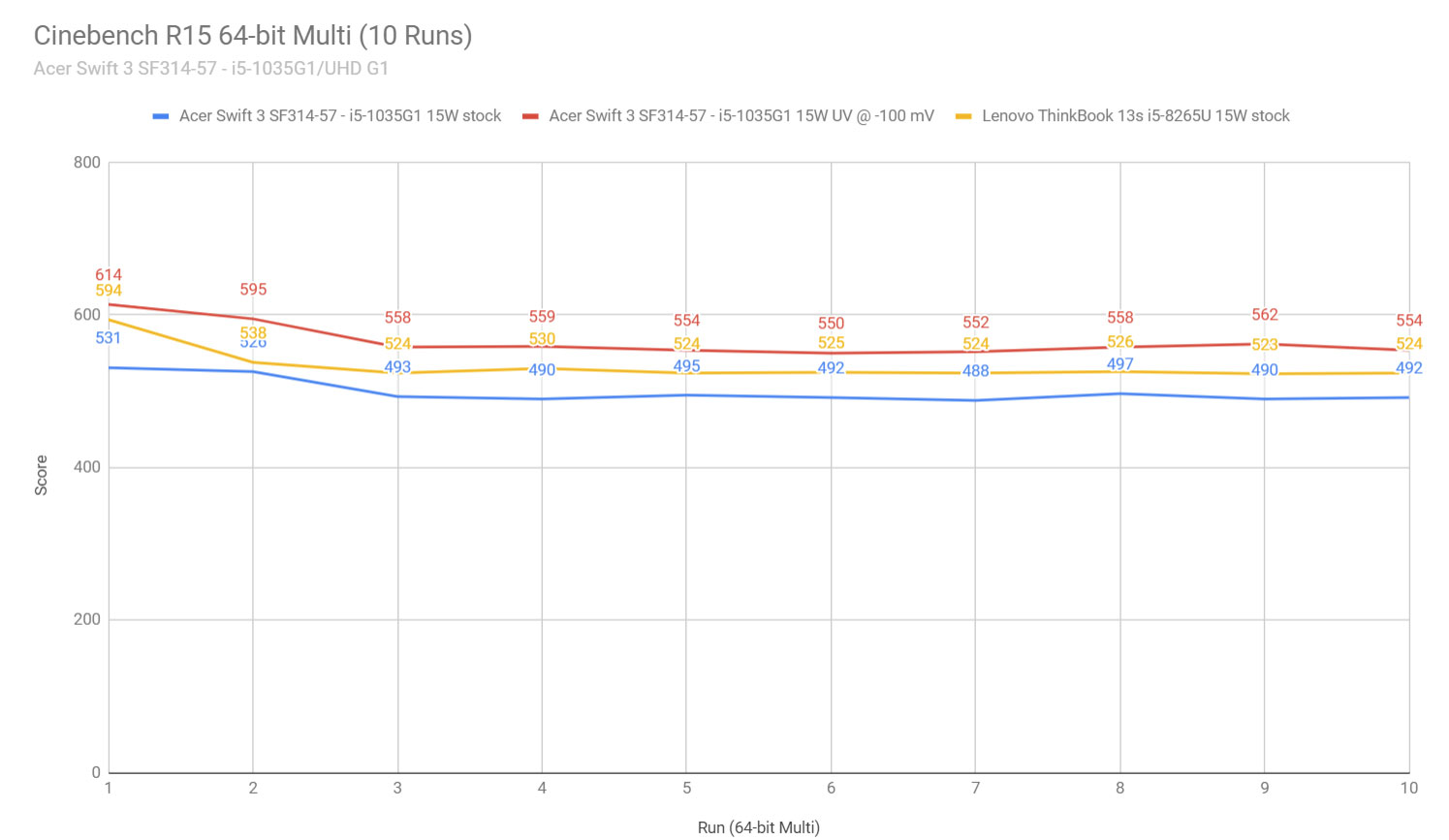 As for the GPU results, here’s what we got:

I’ve also thrown in Nvidia MX250 results, for comparison. While we don’t have the results to fill in all the blanks, it’s obvious that the UHD G1 iGPU is faster than the older UHD 620 iGPU in the Comet and Whiskey Lake i5s. At the same time, though, it trails the Radeon Vega 8 in the AMD APUs and the builds with dedicated MX250 graphics. That’s why you should not expect to comfortably game on a basic Core i5-1035G1 configuration (our detailed review of the Acer Swift 14 SF314-57 further looks into gaming performance in several titles).

However, it’s important to mention that Intel also offers beefed-up SKUs of the IceLake Core i5s, the Core i5-1035G4 (48 EUs) and Core i5-1035G7 (64 EUs), which will perform better in GPU loads and games. However, based on what I’m seeing right now, I don’t expect much love for these processors. You can find them in devices like the Lenogo Yoga 740 or the Surface Laptop 3 13, but most OEMs opt to implement the Core i7-1065G7 processor with faster clocks, more cache and the 64 EU UHD graphics as the higher-tier option, while keeping the i5-1035G1 as the mid-level configuration.

This pretty much wraps-up our initial overview of the Intel Core i5-1035G1 processor. In few words, this CPU offers a slightly more balanced platform for mid-level ultrabooks than the previous Intel Whiskey and Comet Lake hardware platforms, with good CPU performance for daily multitasking and casual use, as well as improved GPU performance for older or simpler games. It’s not a ground-breaking update, but it’s a fine mid-ranger for the average user.

However, those interested in improved multitasking and high-load performance should rather look at the available Comet Lake six-core Core i7-10710U builds, while those interested in fair gaming performance on an ultrabook should opt for the higher-tier i7-1065G7 options, or better yet some of the MX250 powered variants out there. Finally, AMD Ryzen 5/7 and next-gen Renoir-based Athlon platforms are definitely not something you should look past, especially if you’re shopping in a lower budget.

Disclaimer: Our content is reader-supported. If you buy through some of the links on our site, we may earn a commission. Learn more.
Andrei Girbea, Editor-in-Chief of Ultrabookreview.com. I've been covering mobile computers since the 2000s and you'll mostly find reviews and thorough guides written by me here on the site.
← Previous Story IC Graphite Pads: Better than thermal paste?
Next Story → Intel Core i7-10875H (8 Core, 10th gen) laptops – the complete list