The best mobile powerbanks/external batteries for your laptop (2022) 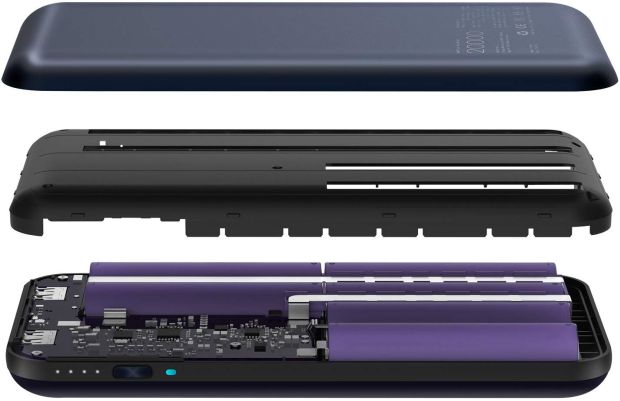 This article tells my experience in finding a good powerbank for my laptop, something I could use as an external battery when needed. It also lists a few of the best such mobile power-banks I found in my research.

Though removable batteries in laptops are rarer and rarer these days, the upside is that more and more laptops, phones, and tablets are capable of being charged over a USB-C connection. Most universal power banks emerged as a result, as they were now able to capitalize on the ubiquity of the USB Type-C connection to be compatible with more devices.

They weren’t always a great solution, though. My first powerbank was the 18,000 mAh/66 Wh Dell Power Companion, and I barely used it. It was heavier than my XPS 15’s power adapter which meant it greatly added a lot of weight to my kit, but the most frustrating thing was that it required the XPS 15’s proprietary barrel adapter to charge, making it a lot more difficult to recharge than it should have been.

Combined with advancements in lithium-ion battery and USB-C PowerDelivery technology, the weight and capacity of mobile powerbanks capable of charging laptops have improved a lot since their debut, however. In short, if you are on the go and rely on your phone or laptop for much of the day, a good powerbank might be very worthwhile. In this list, I give my picks for some of the best candidates for mobile powerbanks for laptops as well as smaller devices.

The list (not in any particular order) is based upon 1) specifications such as weight/capacity ratio, etc., 2) subjective evaluation of reviews, and 3) cost. As usual, most Amazon links to products embed our affiliate codes, but feel free to purchase from elsewhere and support other companies.

The Dell PW7018LC Notebook Power Bank Plus is an evolution of my original Dell Power Companion but a quite costly premium. Now supporting charging by USB-C (must be a USB-PD adapter) natively, this 65 Wh power bank can deliver up to 65 W, which is fairly good for a 1.06 lb charger. Other advantages include a 10 W USB Type-A port for charging an additional phone or other smaller device and the fact that you can plug the Power Bank Plus between the laptop’s adapter and the laptop, charging both the power bank and the notebook at the same time.

The downsides seems to be the relatively high price and user reports that it gets very hot during charging — it doesn’t sound like you want to touch it while it’s plugged into a laptop.

The Mophie Powerstation is a unique entry in this list as the power bank capable of the highest output courtesy of its built-in AC jack.

When using an AC adapter, the Powerstation can deliver an impressive 100 W to your laptop while the two USB ports (one Type-A and one Type-C) are rated at up to 30 W over USB PD each. Thirty Watts is a magic number here because it’s enough to provide fast-charging functionality to iPhones and other supported smartphones.

As far as capacity, the Wh rating is not listed on the Amazon page. However, with 3.7v per Li-ion cells at 22,000 mAh, the Powerstation AC is estimated to have a capacity of around 81 Wh.

Overall, I like the general design of the device and its raw power output, but it’s also one of the more expensive and heavy powerbanks on this list. Like the Dell power bank above, it also reportedly suffers from high temperatures during use. 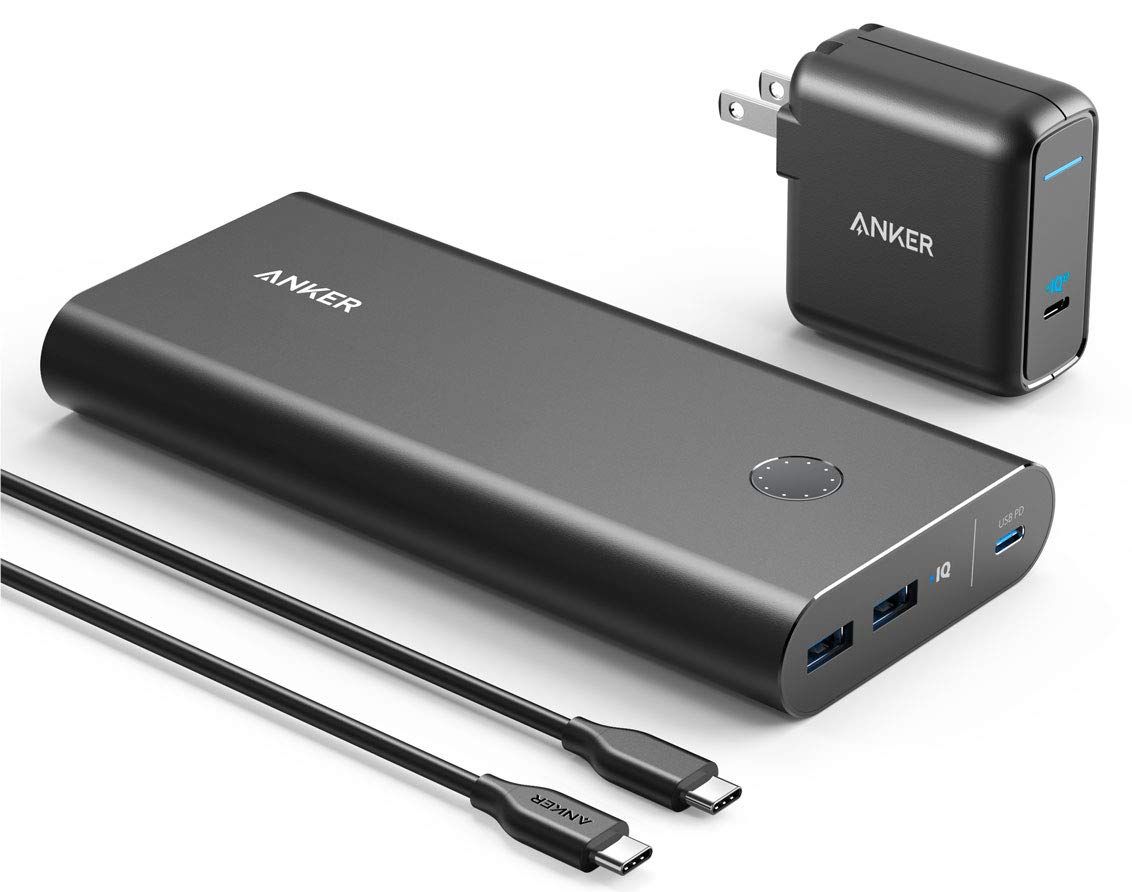 The PowerCore+ is not the lighest or most powerful powerbank on this list, but it does hit a few sweet-spots for its price. The 45 W of power output alongside an (estimated) ~98 Wh capacity makes it a suitable companion for most ultrabooks on long trips, and the extra 2 USB-A ports are a nice bonus. What I like most about this package is the fact that it comes with a universal 65 W charger, making it a nice “total-package” solution for someone traveling or working frequently with an ultrabook like an XPS 13 or such. It’s also cheaper than much of the competition, so you do seem to get a lot for your money here.

As far as downsides go, the biggest one (literally) seems to be its weight and dimensions. At 1.6 lbs, and 7.09 x 3.15 x 0.94″, its not the smallest and lightest traveling charger companion there is. But, if you want a lot of capacity and an extra charger and don’t need very high wattage, the Anker PowerCore+ seems like an excellent option. 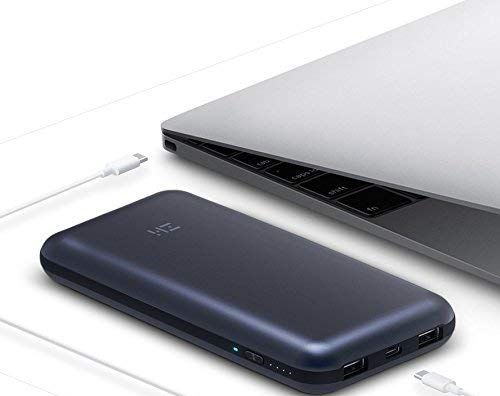 Another budget offering that should work for most people quite well is the ZMI USB PD Backup Battery & Hub. It weighs only 0.9 lbs while packing a succulent 72 Wh of juice (sorry for the wordplay) and can charge through its one USB-Type C or two USB Type-A ports at up to 40 W. If you are looking for a nicely constructed power bank for your ultrabook, phone, or tablet that’s significantly south of $100, this looks like a great option — save for one big caveat, of course.

The biggest downside is that, according to ZMI, the USB PD Backup Battery & Hub explicitly doesn’t have the ability to charge Dell’s XPS 15 9550 (requires 60W according to Dell), which makes me doubt as to whether it will work for other laptops in that family. This is (my guess) likely due to the lower wattage (40) or voltage output of the powerbank. If you have a 6/8-core powerful laptop, make sure you check the minimum compatible wattage for it before buying a power bank or charger.

Overall, it’s relatively cheap, generously sized, and fairly compact. It doesn’t come with its own wall-charger like the above Anker option and it can’t charge more power-hungry laptops, but, those are fairly standard drawbacks for such a low pricepoint.

There are lots of powerbanks out there, but there are also lots of caveats for most of them. Be sure that the bank is capable of putting out the required minimum wattage for your device regardless of its USB-PD certification, is cleared for airline travel, and has mostly positive user experiences in the reviews. To be honest, though we struggled a bit at the time of writing trying to find better alternatives to any of these four listed products for various niches of the market, there are new devices being released all the time and you may be able to find something new just one or two months from now. If you have a power bank you’ve been using and would like to recommend it, please feel free to sound-off in the comments below!

Disclaimer: Our content is reader-supported. If you buy through some of the links on our site, we may earn a commission. Learn more.
Douglas Black is a Technical Writer, Analyst, Teacher, and DJ currently based in North Carolina.
← Previous Story Gaming laptops with 144Hz, 240Hz, 360Hz & 480Hz high refresh screens
Next Story → Logitech K400 Plus vs K830 vs MX Keys- My search for the best wireless keyboard