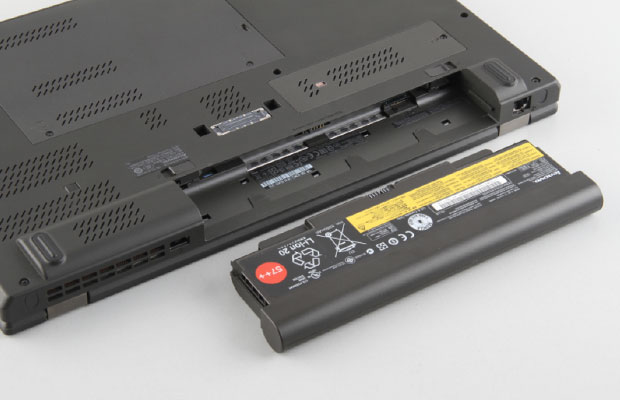 For some of our readers, external batteries might be a distant memory from 2005. For others (notably ThinkPad users and fans), an external battery is a much more recent memory. That’s because up through the Tx80 of the venerable T-series (I won’t make a pewdiepie joke) ThinkPad line, many ThinkPads still had external batteries that could even be hot-swapped.

Unfortunately for some, the 2019 lineup of X290, T490, T590, and P53 all saw their separate external and internal batteries swapped out for a single internal one. It was a controversial move that some lamented, while others defended.

At IFA this year, we got the chance to chat face-to-face with a couple of leading voices for Lenovo and, of course, ThinkPad! First on our docket of questions was what happened to external batteries (and Lenovo’s Power Bridge technology along with it): many on forums were of the opinion that ThinkPads were being commodified in an attempt to be thinner, lighter, and generally more “MacBook-like”, but the official line from our Lenovo executive is a bit more straightforward: As a financial decision, the extended batteries just weren’t being sold enough to justify their continued existence for the company.

That’s sad news for those of us (myself included) who enjoyed the autonomy and flexibility that having multiple spare and extended batteries provided, but there’s also a vocal group who welcomed the move. These users find the battery life afforded by modern CPUs and internal batteries good enough for their own uses and are happy to bring along a USB-C power bank when more autonomy is needed.

Personally, I’m still hoping that the option for external hot-swappable batteries makes a return next year or in the near future. Of course, Lenovo will need to figure out a way to make the option more financially viable.

What do you guys think? Do USB-C power banks like this one Lenovo put out effectively replace the option for external and extended batteries for your own usages? Let us know down below.

Disclaimer: Our content is reader-supported. If you buy through some of the links on our site, we may earn a commission. Learn more.
Douglas Black is a Technical Writer, Analyst, Teacher, and DJ currently based in North Carolina.
← Previous Story At $339, the Lenovo 330S is the cheapest “Hackintosh” yet is faster than the MacBook Air
Next Story → Gaming With a Business Laptop