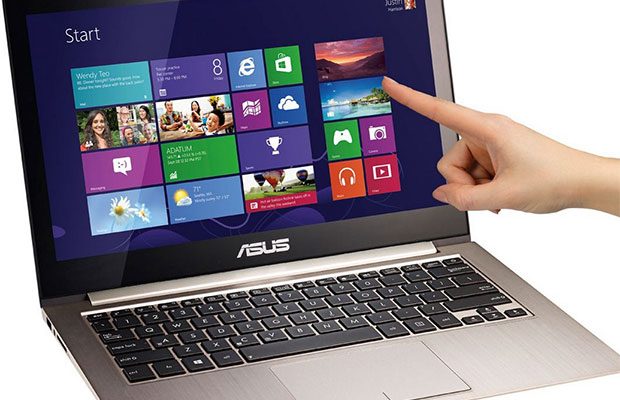 Haswell is here and that means we’ll see a whole bunch of new ultrabooks and ultra-portables in stores in the next few months.

Details are still rather scarce on the two for the time being, but stay tuned, we’ll update the post in the near future and hopefully we’ll get out hands on them asap, for reviews.

From the looks of it, the Zenbook UX31A LA is pretty much the UX31A we tested a while ago, with two additions: is powered by a new Intel Haswell ULV hardware platform and offers a touchscreen, instead of that nice non-glare display we had on the first UX31A generations. Having a touchscreen of course means that the entire screen is covered in glass, thus is glossy and reflective, especially when used outside. And it also adds a bit to the total weight of the product.

Aside from these, the laptop looks and feels exactly like the current generation: aluminum case (in two shades, darker on the hood, lighter on the bottom and inside), decent selection of ports around the side (2xUSB, SD Card-reader, micro HDMI and mini VGA – some dongles are also included in the pack). By the looks of it, the UX31A LA seems pretty much identical to the standard UX31A, so we can assume it’s going to measure around 338 x 226 x 11~18 mm (13.3 x 8.9 x 0.44-0.66 in) and weigh about 3.1 pounds (or 1.3 kilos).

Also, there’s probably the same 50Wh battery  inside the the UX31A LA, but while the Ivy bridge versions lasted around 5 hours each charge on average use, we could expect the new Haswell options to last about 6 to 7.

Of course, the Asus Zenbook Pro Touch UX31A LA will be available in a bunch of different hardware configurations, with Intel i5 or i7 ULV processors, different amounts of RAM and different types of storage options, including some RAID SSD  options, like we’ve seen on the Zenbook UX51.

How about prices? Well, those are still unknown for the time being, but I’d reckon the UX31A LA will start from around 1100 USD and should hit the stores during this summer. We’ll update once we know more.

The Asus Zenbook Infinity is still mostly surrounded in mystery. Asus showcased it at Ccomputex, but offered very few details about it. We do know that it’s going to inherit many elements from the current Zenbooks, but:

And that’s about it for now. We do know that the laptop will also feature a backlit keyboard, a LED backlit logo on the hood and will come in a darker shade than what we’re used to on the current Zenbooks, based on the units displayed at Computex.

Asus claimed they will have the Zenbooks Infinity in stores around Q4 this year, so there’s still a fair amount of time to wait before we could buy it. There are no exact details on prices, but given the specs and the features, I’d reckon at least $1500, if not more.

Anyway, that’s about it for now. I’ll update the post once there will be more details about these machines. But in the meantime, let me know what do you think? For me, the UX31A LA is an expected follow-up for a popular line, and the extra battery life, plus the performances boost, will certainly be appreciated. I only hope they will make a non-touch version as well. We’ll see.

As for the Zenbook Infinity… I don’t know. It sounds very nice on paper, such a powerful and slim computer, but we’ll have to see how the high resolution screen, powerful hardware and cramped body will be able to live with each other. I’m afraid it will get quite hot, I’m afraid the battery life could be bad and last but not least – what’s with the glass covered hood? Who wants that? :P

Disclaimer: Our content is reader-supported. If you buy through some of the links on our site, we may earn a commission. Learn more.
Andrei Girbea, Editor-in-Chief of Ultrabookreview.com. I've been covering mobile computers since the 2000s and you'll mostly find reviews and thorough guides written by me here on the site.
← Previous Story Asus Zenbook comparison: Prime UX31A vs UX32A vs UX32VD vs UX51VZ
Next Story → Sony Vaio Pro 13 vs Pro 11 – which one to choose?