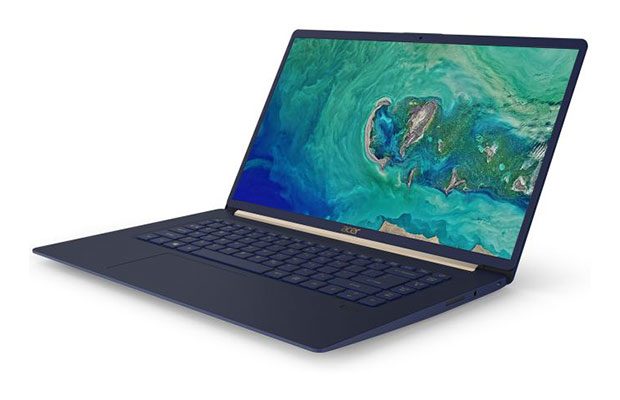 Acer has a bit of recent history with creating products that are the most something, seemingly for the sake of the title. The Swift 7 was the thinnest laptop in the world, with its current iteration’s waistline measuring just under 9mm.

Acer did say that the model on display at [email protected] was a prototype, but we can expect the final shipping product not to change much. Like it or not, you can’t say that Acer’s Swift series don’t have their own distinct style. Sporting the same ocean-blue and gold colorway as the other Swifts, the new 5 looks like the natural evolution of its predecessors, the original Swift 5 and 7. Where the 5 and 7 have very chunky bezels, the new 15-inch Swift has a much more modern, streamlined look.

Update: Our full review of the Acer Swift 5 S515-51T series is available over here.

Acer touts a new partially magnesium-lithium construction as the reason why the laptop can be so light. LG has had issues in the past with their laptops feeling very flimsy (remedied to a degree with the most recent iteration), so here’s hoping that Acer has figured out how to make the chassis not just lightweight, but sturdy, like the X1 Carbon.

Around 200 grams lighter than the LG Gram 15, the Acer Swift 5 15 should be the new lightest 15-inch laptop in the world.

While it does have a decent I/O assortment of 2 x USB 3.1 Type-A, 1 x USB 3.1 Gen 2 Type-C, full-size SD card reader, HDMI, and 3.5mm audio, it unfortunately does not support Thunderbolt 3. For security features, the Swift 5 15 packs a fingerprint scanner and Windows Hello-compatible IR camera.

The exact CPUs used, battery size, and price details are all unknown at the moment, though the sales rep claimed it had a battery life of around 10 hours. Because cooling and battery are two of the heaviest components in a chassis (and are thus most often impacted when cutting weight), it will be interesting to see how the new Swift 5 performs in these departments. Hopefully it will get a bigger battery than the 36 Wh one inside the existing 14 inch model. Availability to purchase is rather far off, with an expected release date of Q4 of this year.

Update: Our full review of the Acer Swift 5 S515-51T series is available over here.

Disclaimer: Our content is reader-supported. If you buy through some of the links on our site, we may earn a commission. Learn more.
Douglas Black is a Technical Writer, Analyst, Teacher, and DJ currently based in North Carolina.
← Previous Story Razer Blade 15 gaming laptop – 8th gen Core H CPUs, up to GTX 1070 graphics and 144 Hz IPS screen
Next Story → Huawei MateBook X Pro – premium build, 3:2 screen, Thunderbolt 3 and proper hardware