AMD Carrizo – a breath of fresh air for mid-priced laptops? 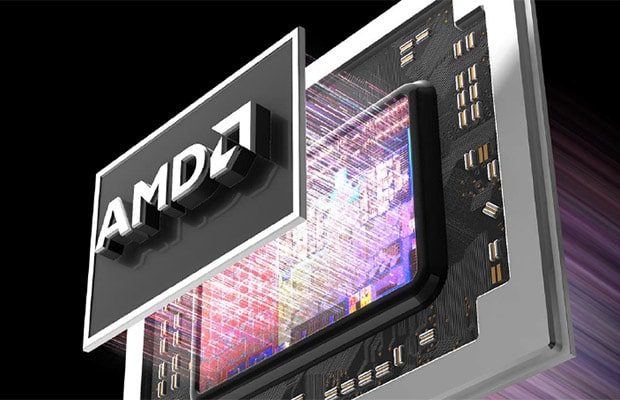 AMD powered notebooks have become a rare commodity lately. A multitude of reasons lead to this outcome, but the core problem has been the hardware, which paled in comparison to the competition year after year. AMD are aware of their problems and are confident their latest mobile-architecture, Carrizo, is going to change things.

Carrizo hardware will ship to OEMs at the beginning of this summer and will end up on final products in the next few months. Asus, Lenovo, Acer, HP and Toshiba are on board and will offer notebooks built on it.

The platform is meant to offer solid day-to-day performance, a decent gaming experience and good battery life for mainstream laptops. It is aimed towards devices with prices between $400 and $700 and will compete against the low-end Intel laptops with Core i3 and maybe i5 ULV processors and no dedicated graphics. That means it will probably not make its way into many ultraportables. Still, I’ve seen at least one sleek prototype, so chances are we’ll have some beautiful AMD notebooks in the end.

On the other hand, it’s wise from AMD not to overstretch, to only aim at a chunk of laptop users who don’t have many good options to choose from right now. Chasing the giant called Intel across the board would be impossible, but attacking and hopefully making an impact in a smaller niche could end up in at least a victory.

According to AMD, the Carrizo platform is built around three main pillars: 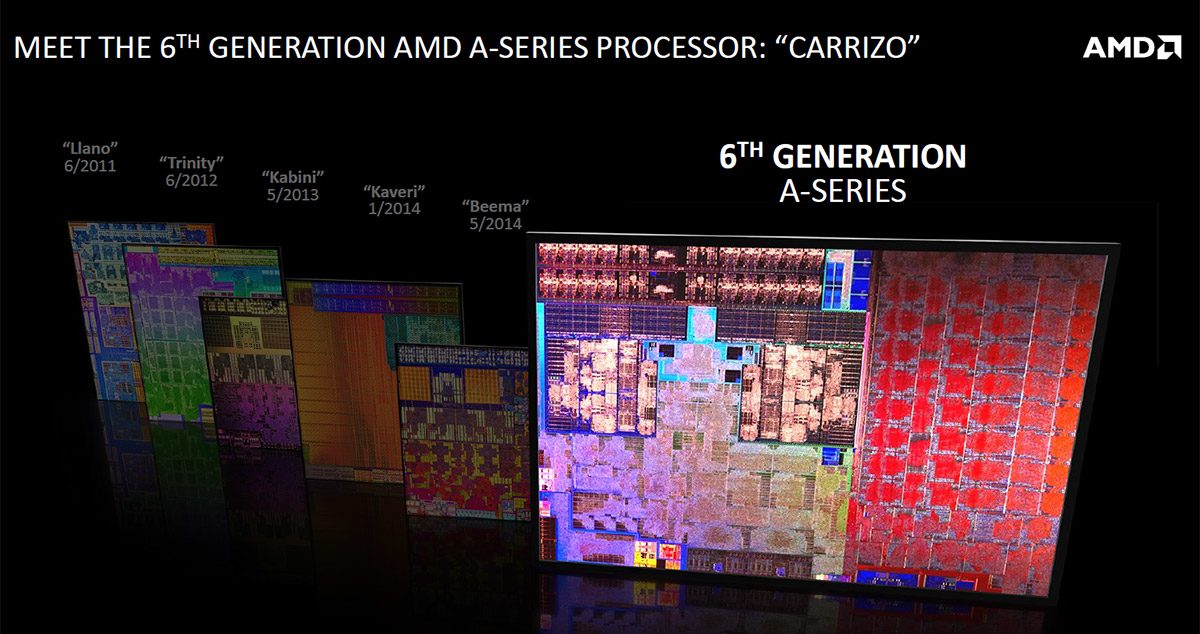 We’ll talk about all these below, but first you should know that the Carrizo APUs will get an 8xxxP indicator in order to differentiate them from the previous AMD lines. Several different APUs will be available down the road, including A6, A8, A10 and FX models. Some of them are mentioned in the following table, just to see what to expect in terms of specs:

First of all, you should know that Carrizo is still based on the 28nm architecture and comes in an FP4 package. It is however AMDs first HSA 1.0 compatible SOC (you can read more about this standard here) and integrates the CPU, GPU, NorthBridge, SouthBridge, IO on the same die.

Compared to Kaveri, the FCH (SouthBridge) is also included on the SOC now and that leads to improved security, Display, Audio, PCI-E, SATA and USB support. The Carrizo APU offers HDMI 2.0 and up to 3 PCI-E 3 interfaces for discrete graphics, as well as up to 8 USB ports and 2 SATA 3 ports. Those technical details might not mean that much for the average user, but actually show that Carrizo is, at least design wise, quite a significant improvement.

The chips include 4 Excavator Cores with 2 MB of L2 cache, 3rd gen GCN GPU with up to 8 computing units (up to 512 cores) and supports dual-channel DDR3 memory with speeds up to 2133 MHz. If you’re familiar with the previous AMD platforms, you’ll notice the amount of L2 cache has dropped from 4 MB to only 2 MB, but the designers increased the amount of L1 Cache, improved Branch Prediction and several other aspects, thus the end result is actually capable of pushing more instructions per clock without requiring more energy. The gains will of course vary from application to application and without testing a final product, it’s impossible to say how fast will a Carrizo laptop be in certain tasks. 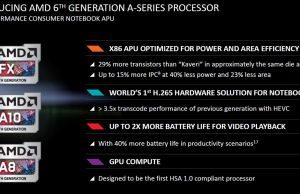 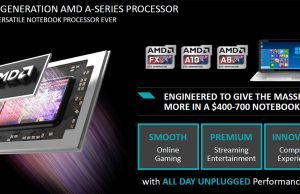 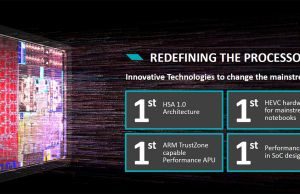 AMD did announce their are working closely with Microsoft, Adobe and other software manufacturers to integrate the hardware capabilities into their programs. This should translate in speed increases in Office, Photoshop, Premiere and especially in Windows 10. We’ll talk about that in a bit.

AMD also work on their own suite of apps, among them are Gestures and Looking Glass, a piece of software that will index all the video content on your computer and help you quickly find, tag, and edit those parts that include a certain person, for instance.

It’s important to mention that the Carrizo APUs will be offered with several different TDPs, ranging from 15W to 35W, and the most noticeable gains are visible on the more efficient models, again, compared to the previous generations. Manufacturers will be able to pick the exact type of APU they would want in their machines, opting between speed or battery life. 15W APUs should be the options for ultraportables and will take Intel’s 15W Core i processors heads-on, while the more energy-hungry options will probably make their ways in beefier multimedia laptops.

The APUs include a new UVD (unified video decoder) that offers hardware encoding/decoding for a variety of video formats, including the popular H.264 and the more recent H.265 (HEVC), a standard meant to provide improved video quality with less hardware requirements (as long as HEVC decoding is supported by the platform, like in this case). Intel’s latest Broadwell series does not offer hardware HEVC support and as a result, HEVC video content runs choppy on Intel processors and flawlessly on the Carrizo AMD.

However, whether that’s going to be relevant for mainstream buyers, those AMD targets with their platform, remains to be seen and will be greatly impacted by the major online streamers’ decision of supporting this format or not. Google for instance is pushing the VP9 codec, also supported by many other companies (including Intel, Samsung or Qualcomm), while Microsoft or Amazon are pushing HEVC, so we’ll have to see which one comes on top in the end. 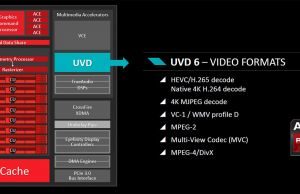 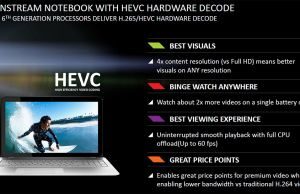 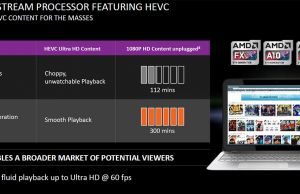 What you should take out of this though is the fact that notebooks built on the Carrizo APUs will be able to play FHD and 4K content at 60 fps smoothly with little burden on the hardware, which will majorly help with the battery life, temperatures and noise. In fact, increased battery life in video-playing is another major selling point in AMDs pitch.

Last but perhaps the main selling point of Carrizo are graphics performances in games. AMD targets online gamers, those who play titles like LOL, Strarcraft 2, CS:GO or DOTA online, look for a laptop that can handle them smoothly and only have a limited budget at hand, one that doesn’t allow them to buy a computer with dedicated graphics. The Carrizo APUs will outmatch the Intel Core i5-5200U processors (with Intel HD 5500 graphics) in these games.

The truth is AMD’s APUs have been on top of their Intel counterparts in these last years as well, but they did sacrifice battery life and thermal/acoustic performance. By the looks of it, that’s not going to be the case anymore. 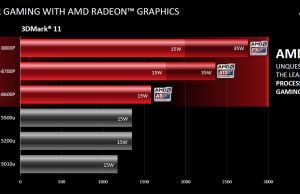 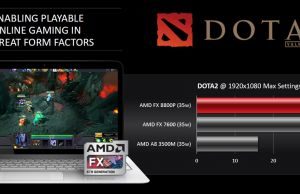 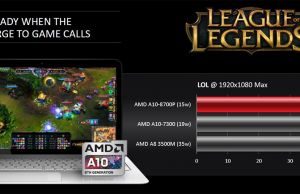 Microsoft’s Windows 10 will make better use of the graphics on a computer by providing GPU accelerated elements withing the main interface and applications. These might not sound like much, but if the hardware and software work well together, a smooth end-user experience will be possible on only mid-level hardware.

Among other things, Windows 10 will support HEVC decoding in Windows Media Player, HEVC streaming in Skype and streaming from an Xbox One to a PC through HEVC. That benefits the AMD hardware greatly, since it does offer the hardware UAV.

However, the big thing with Windows 10 is DirectX 12, which supposedly offers a massive performance increase over the DirectX 11 API used by most PC games these days. That translates in better frame-rates from a given hardware, which will lead to modern games being playable on mid-range computers, which is exactly the segment AMD targets with Carrizo. 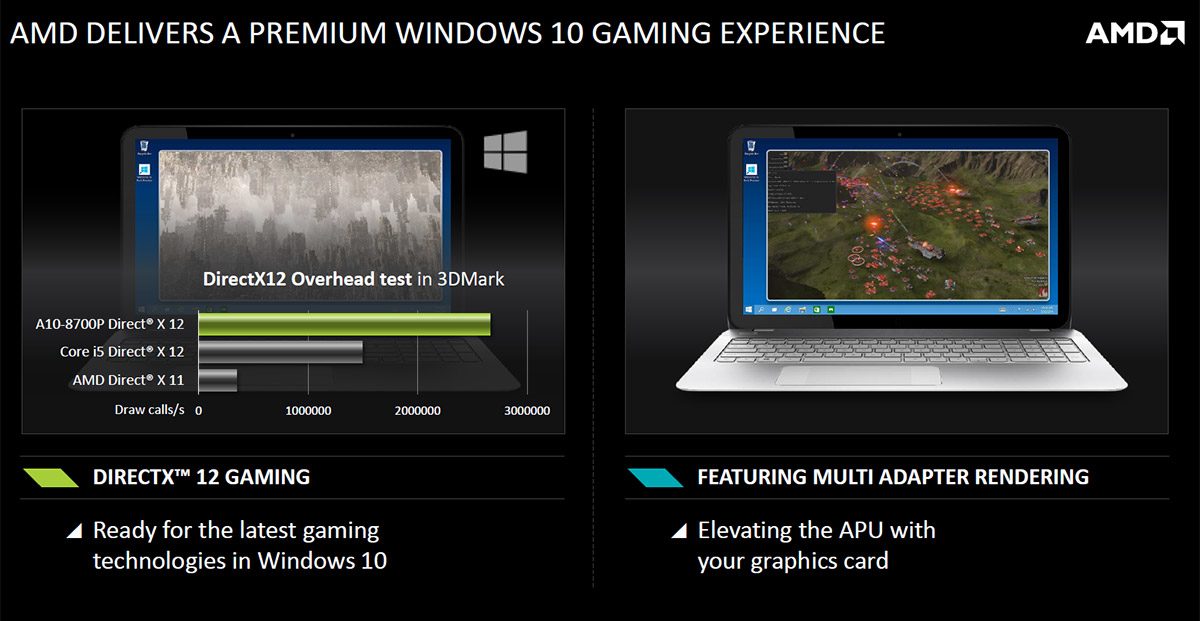 DX12 games will hit the stores towards the end of the year though and by that time we should know better how the Carrizo APUs are going to handle those titles and especially how they’re going to compare with Intel’s integrated graphics chips. 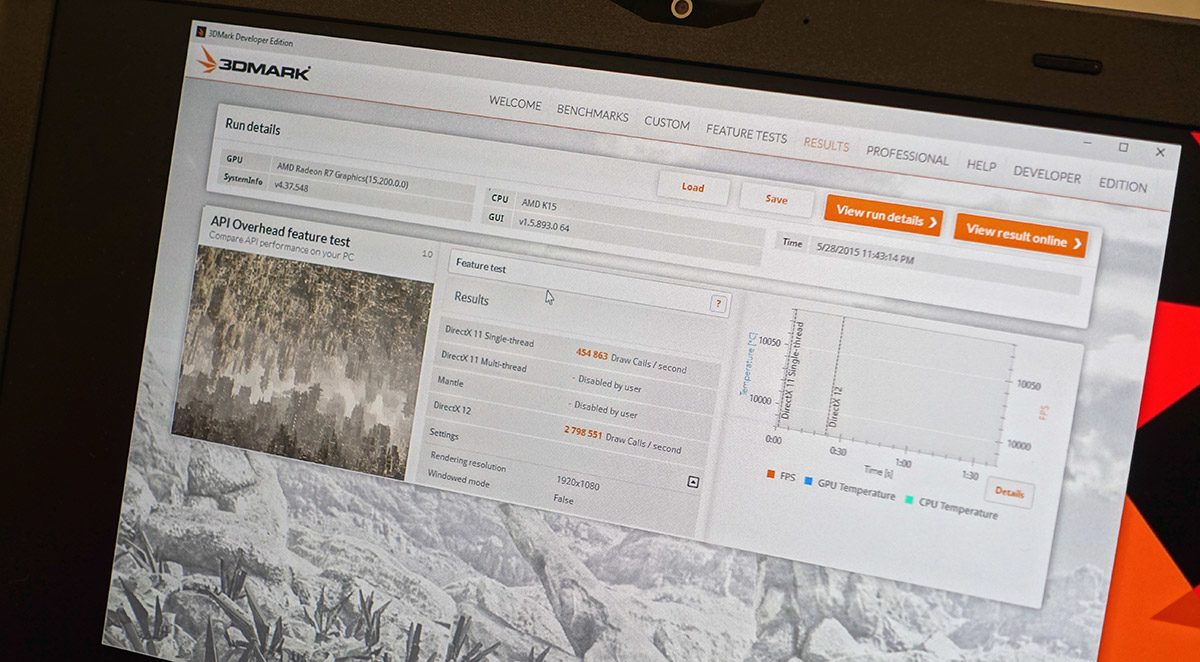 Previous AMD platforms trailed their Intel counterparts by miles when it came to battery life, especially since the Intel ULV series have become more and more efficient each year.

I haven’t tested an AMD laptop in a while, but with Kaveri you could expect them to last about 3-4 hours in daily use each charge. Carrizo should fix that, more than doubling the expected battery life in video looping and streaming, but also improving efficiency in games and tasks that put the graphics to work.

The question is how will these Carrizo notebooks behave in daily use (browsing, text editing, listening to music, watching movies, etc) and how will they compare to Intel’s Broadwell and Haswell machines. And I’m including Haswell here cause the AMD hardware is probably not going to compete with the Broadwell devices head to head, given how Carrizo targets a lower price-segment, where we will find last year’s Intel powered devices with discounted price tags.

Of course, battery life is going to be greatly affected by all the other components on a laptop and the battery’s size, so once again, it’s impossible to draw any conclusions until we get to see the final designs and products. Keep in mind that there’s also the variable TDP to consider and opting for a 15W or a 35W APU will have a significant impact as well. 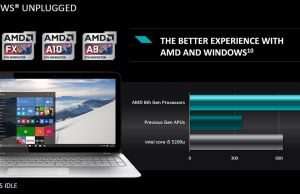 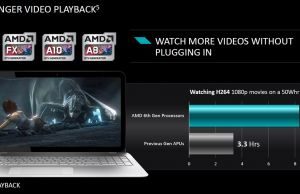 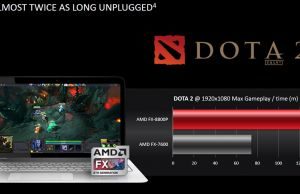 At the end of the day, all these aspects mentioned above will have to be backed-up in practice, by the real products we’ll be able to buy in stores.

I’ve seen some Carrizo prototypes at work, smoothly playing HEVC video content, games like Dirt:Rally on FHD resolution with medium details or running DirectX 11 and 12 benchmarks. The results are promising, but AMD and the OEMs just need to pack the hardware in good notebooks now.

The targeted price range, between $400 and $700, should make these AMD machines highly attractive for the average buyer, but scares me at the same time, as I’m afraid of the sacrifices that will have to be made in order to reach those prices. They could translate in poor displays, faulty construction, bad keyboards and all the other nits we’ve seen on affordable AMD-powered laptops in the past. Having a decent platform is not enough to sell notebooks these days… 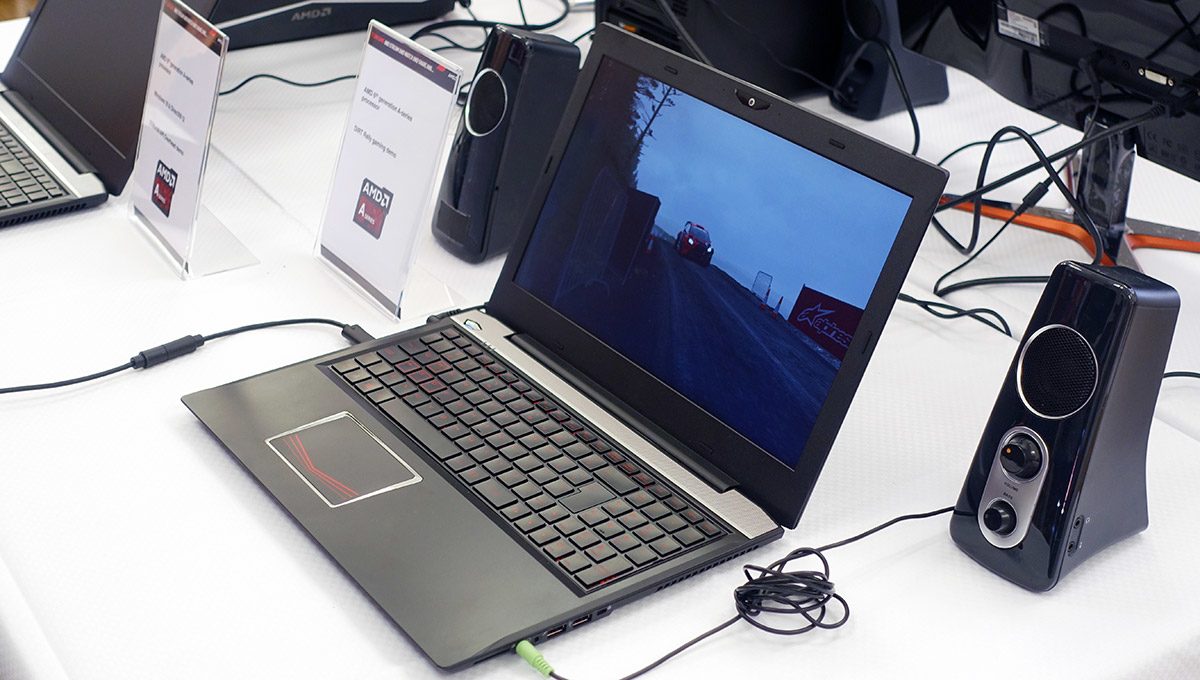 Carrizo is promising, but AMD needs to put the hardware in some good notebooks by the end of the Summer

And since we mostly cover thin and light machines here, I’ve asked the AMD officials whether they plan to include this hardware in premium ultraportables, given how many of you are interested in thin and light gaming machines. They said it’s not their main concern, but they haven’t dismissed the idea completely either, so perhaps something like that will come out in the end. I’m looking at Asus or Acer, they had some interesting AMD mini-laptops in the past.

We’ll see. So far, we can conclude that the platform looks like a potential winner for a certain niche of buyers, but there’s a long and steep road ahead for AMD.

Disclaimer: Our content is reader-supported. If you buy through some of the links on our site, we may earn a commission. Learn more.
Andrei Girbea, Editor-in-Chief of Ultrabookreview.com. I've been covering mobile computers since the 2000s and you'll mostly find reviews and thorough guides written by me here on the site.
← Previous Story Intel Core i5-5200U vs Core i7-5500U – which one’s the better deal?
Next Story → The complete list of Broadwell (Core M and Core i3/i5/i7) portable laptops and ultrabooks