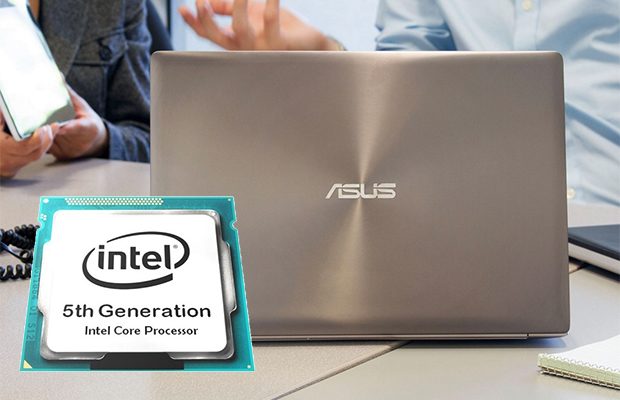 Asus quietly updated their lines of ultrabooks with Broadwell hardware and these devices are already starting to pop-out in stores around the world. They also launched a few new devices, sleeker than ever before, like the Zenbook UX305 or the Chi T300.

Broadwell is a “Tick” update, a shrink in die-size from Haswell, and that’s why when it comes to everyday performance, there’s not a lot of a difference between the two platforms. I’ve already analyzed the Core i5 and the Core i7 Broadwell processors side by side to the Haswell i5s and i7s, and the new hardware wins when it comes to efficiency and integrated graphics, while RAW CPU analysis show only a minor update from one generation to another.

All these, combined with the imminent launch of Intel’s next “Tock” upgrade, Skylake, at the end of this year, left OEMs reluctant to push Broadwell heavily. That’s why some went for these quiet updates, replacing the Haswell CPUs with Broadwell processors in their laptops, while others just haven’t yet announced Broadwell models.

Anyway, with that out of the picture, let’s turn our attention of the Broadwell Zenbooks and Transformer Books available these days. We’ll start with the Broadwell U models and we’ll also talk about the Core M devices towards the end.

The mid-range Zenbook UX303LA now available in the US and several other countries with an Intel Core i5-5200U processor. The UX303LA-DS51T model includes 8 GB of RAM, a 128 GB SSD and a Full HD 1080p touchscreen, all for under $900 these days. Follow this link for more details an up-to-date prices.

The laptop can also be paired with an Intel Core i7-5500U processor in Europe (already shipping in UK, Germany, France, etc), Canada and Asia, but it couldn’t find an i7 configuration in the US just yet. 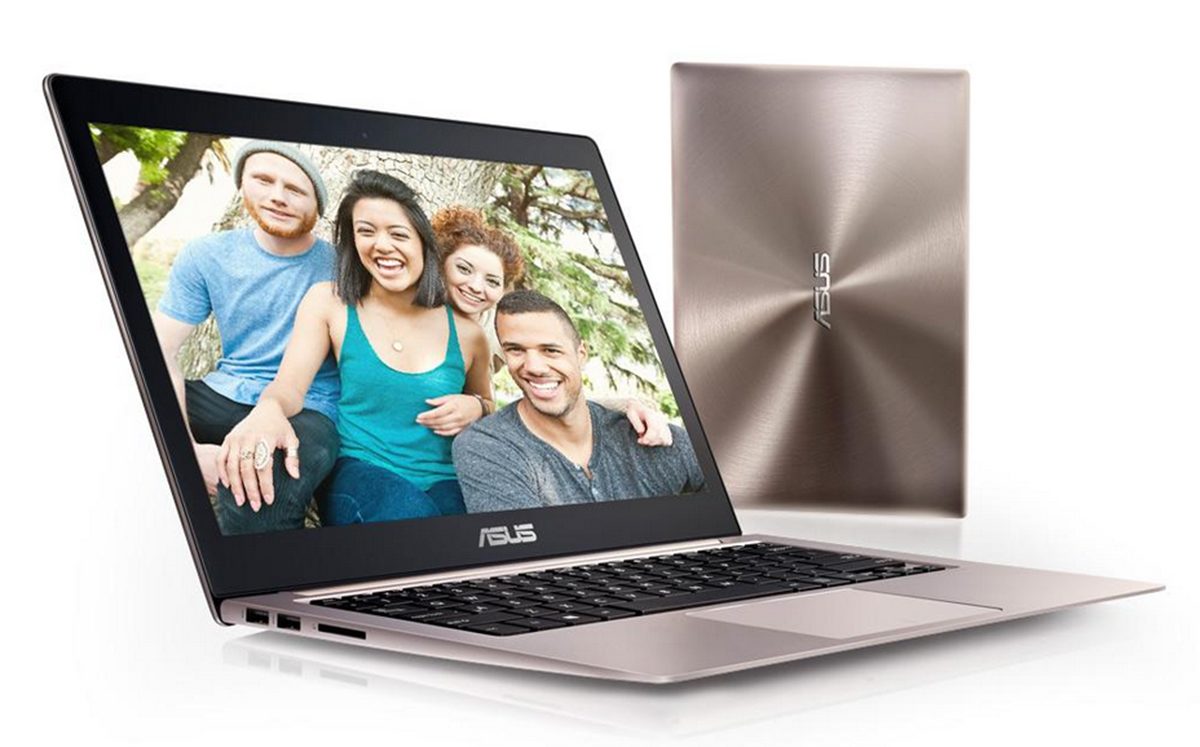 The Zenbook UX303LA is now available with Broadwell U hardware

The UX303LA Broadwell models fully benefit from the platform’s gains, as they should last 30-60 minutes longer on a charge, but also offer improved graphics performance, which is mostly going to be visible in light games and other graphics-demanding applications. But especially in games. That aside, the UX303LA remains the same solid min-range 13 inch ultraportable.

If you’re into gaming, the UX303LN is clearly the better choice here, as it is actually one of the most compact and powerful laptops out there. Our detailed review of the UX303LN series will tell you more about that. The update to Broadwell doesn’t help it much though, as the burden falls on the Nvidia chip in demanding titles. In fact, you’ll only see an improvement in terms of daily use battery life, and maybe a minor, minor bump in terms of fps and loading times, due to the marginally faster processor.

The screen on the other hand still suffers from those murky colors, a problem Asus were still not able to address from what I’m aware of (please correct me if I’m wrong), despite unofficially saying they’ll release a fix for months now.

The Zenbook UX303LN with the Broadwell i7-5500U processor, QHD+ display, 12 GB of RAM and a 256 GB SSD is already available in some parts of the world with a MSRP of roughly $1300, which is on par with the Haswell version at launch. The i7-4510U Haswell models have seen price cuts in the meantime though and retail for under $1200 these days, which could actually make them a smarter pick, unless the slightly longer battery life is really worth $100+ for you.

For the last year or so the UX301LA was among the fastest Windows running ultraportables on the market, as it was one of the very few built on a 28W Haswell platform (the top configurations, with the Intel Core i7-4558U processor). That made it a prime option for those seeking performance in a compact body, for programmers, designers, photographers, etc. Battery life was somewhat sacrificed though, due to the more demanding processor, and in fact our detailed review of the UX301LA series shows you exactly what to expect from this model.

2015 brought quiet updates for this Zenbook as well, and at least two distinct models are (or will soon be) available in stores around the world, one with an Intel Core i7-5500U processor, and also the 28W Broadwell model, called the UX301LA-XS71T, that offers an Intel Core i7-5557U , 8 GB RAM, 512 GB SSD and Intel HD 6100 graphics for a whooping $2149. That’s a lot of money for a 13 inch ultraportable, but the UX301LA has always been pricey. In fact, follow this link for up-to-date prices on this series.

As mentioned in my analysis of the Core i7-5500U processor, the UX301LA equipped with it should come close to the i7-4558U model, while going for longer on a charge. The Core i7-5557U is the one that will catch all the attention though, and while I expect it to outmatch last year’s model, I can’t exactly tell what to expect right now. I do hope it will be 10-20% faster, run cooler and more efficient, but how will these actually translate in real-life use remains to be determined.

The Core i7-5557U version of the UX301LA is listed in a few shops, but a shipping date isn’t yet available. Will update this section in the near future.

The Transformer Book Flip TP300 and the TP500 were quite popular at the end of 2014, mainly because they were great devices for the money Asus asked for them and because they were widely available across the world.

Asus upgraded them to Broadwell, but kept the prices at bay, and just like with the UX303LA, that should boost performance, graphics abilities and battery life, making these series even more attractive.

Check out my full reviews of the TP300LA and the TP500LA for more details. And keep in mind that in the US you will also find the Q302 and the Q502 models, which are identical to the ones before, but have a black case, as opposed to the silver one on the TPs.

The Flips offer plenty for a fair price

While the devices mentioned above are powered by Broadwell U hardware, Asus also have a few Core M powered ultraportables in stores.

Core M, or Broadwell Y, is Intel’s low-power platform meant for ultra-compact and in most cases, fanless devices. The hardware is only powerful enough for daily activities like browsing, watching videos, editing texts and photos, etc, but isn’t particularly good at multitasking and definitely can’t match the Broadwell U laptops in terms of performance. But Core M devices tend to be very sleek and mostly affordable.

Here’s what Asus has to offer right now:

At the end of the day, Asus offers quite a few Broadwell powered devices these days, with more coming in the very near future.

All the Broadwell U laptops are in fact last year’s models with updated hardware and they’re mostly an improvement in terms of graphics performance and battery life, while all the other aspects remained unchanged.

The Core M machines are brand new though and they are thin, light, fanless and properly priced, that’s why I’m pretty these sure could become solid options for those of you that require a compact computer for casual daily use.

Regardless of what you end up choosing, be sure to check out my full reviews here on the site, as well as this complete list of Broadwell ultraportables or my selection of the best ultrabooks of 2015. Those should help and if you have any other questions, the comments section is open and I’m around to reply.

Disclaimer: Our content is reader-supported. If you buy through some of the links on our site, we may earn a commission. Learn more.
Andrei Girbea, Editor-in-Chief of Ultrabookreview.com. I've been covering mobile computers since the 2000s and you'll mostly find reviews and thorough guides written by me here on the site.
← Previous Story Asus Zenbook UX305FA revisited – who is it for?
Next Story → Acer Aspire R 13 (R7-371T) review – an odd 13 inch convertible