In this article we’re discussing the 2023 Asus ROG Flow X16 lineup of 2-in-1 performance laptops.

This generation is a hardware update with a few other minor refinements of the 2022 Flow X16 that we’ve reviewed in these two previous articles: top-specced Flow X16 with the miniLED display, and mid-specced X16 model with the IP display.

Unlike the previous model, though, the 2023 Flow X16 ditches the AMD platform for Intel specs, paired with the latest Nvidia RTX 4000 graphics chips and a MUX with Advanced Optimus. The transition to Intel processors allows for a boost in responsiveness and multi-threaded CPU performance, and support for Thunderbolt 4, but at the same time will most likely lead to shorter runtimes on battery use and an increase in price.

The previous X16 was already an expensive series, and I wonder whether the tradeoff that results in switching between platforms makes sense on this sort of product, that’s meant to marry performance and portability in a 16-inch chassis.

I can see many of you complaining about Asus ditching the AMD specs, but as long as Raptor Lake proves more efficient than the past Intel platforms with daily use on battery power, the switch might be worth it for the potential gains in performance in sustained loads. We’ll know more once we get to properly test the 2022 Flow.

For now, we’ll go through the notable features and particularities of the 2023 Asus ROG Flow X16 series down below, comparing it to the previous X16 model, and we’ll follow up with an in-depth review somewhere in the next few weeks.

While not as compact or as lightweight as some other options in its niche, the ROG Flow X16 is one of the most versatile portable full-size laptops on the market, if not the most.

What we found out during our time with the X16 models we’ve used over the last months is that the 2-in-1 format with a 360-degree convertible touchscreen, the sturdy construction and sober looks, the good display options and inputs, as well as the powerful specs kept in check by one of the best cooling designs in the segment, are among the main selling points of this series.

All these findings apply to the 2023 ROG Flow X16 as well, as this update is built on the same chassis as the mid-2022 models, but with new-gen specs and a few refinements involving the screen, IO, and camera options. Down below I’ve included a few pictures of the 2022 Flow X16, so you’ll better understand what to expect with this lineup, and the 2023 model is an identical design. 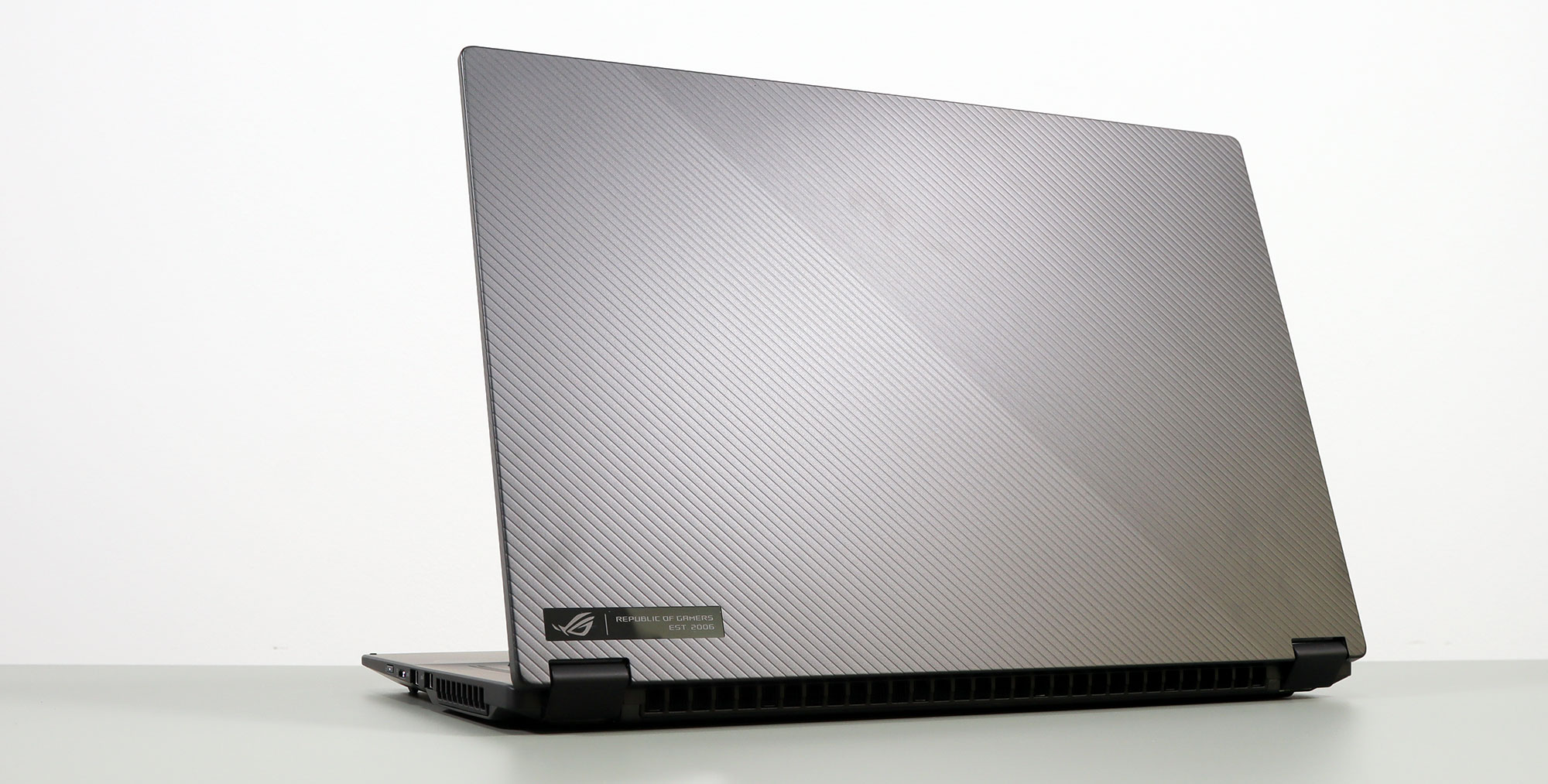 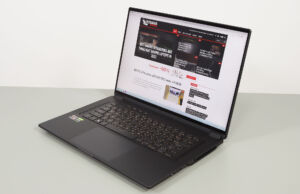 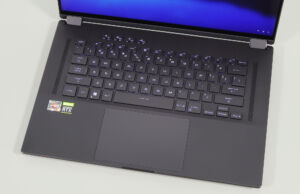 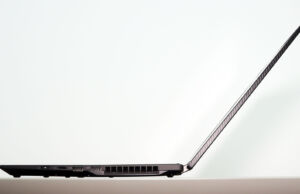 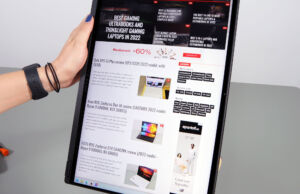 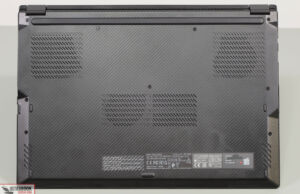 Here’s a brief summary of those updates on the 2023 models: 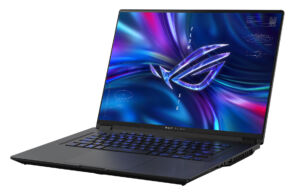 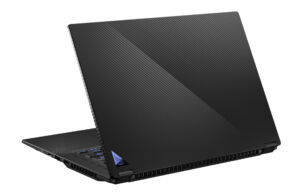 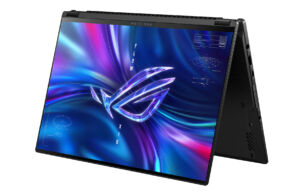 The other notable change is on the inside, where the AMD Ryzen 9 hardware was replaced with an Intel Core i9 H 13th gen platform for the 2023 Flow X16 generation. This allows for a bump in performance with both single and multi-threaded applications, and a slight increase in performance in combined loads as well, thanks to the higher clock speeds of the Intel platform.

Of course, it’s too early to tell for sure how the i9-13900H would have compared to the equivalent Ryzen 9 7000 HS hardware in this design, but we’ll know more soon enough. What we do know at this point is that Asus have steered away from AMD platforms on many of their 2023 laptops, yet not necessarily for performance reasons, but rather most likely for reasons involving the limited availability of AMD mobile components in the past (and future?).

I’d also expect to transition to Intel hardware to impact the battery life of the 2023 ROG Flow X16. The 2022 model offered 5-7 hours of daily multitasking and 8+ hours of video runtimes, and I doubt the 2023 model can match that unless both Intel and Asus are able to optimize things for better energy management on battery use. We’ll look into that in the review.

I’ll also look into the performance of the RTX 4000 graphics chip available for the 2023 Flow X16 series, with options for up to an RTX 4070 125W on the top model. I am a little surprised that there are no options for 4080 and 4090 dGPUs on this series, unlike on the Zephyrus M16 and the more compact 2023 Zephyrus G14, especially since this X16 and the M16 share a common internal design.

That means both offer 2x RAM slots and 2x SSD gen4 storage slots, as well as the tri-fan thermal module with the full-length heatsink across the entire back edge of the laptop. The third fan is positioned in the middle of the laptop, and pulls in fresh air over the components and towards the back radiator. Here’s a picture of the internal design of the 2022 X16, and the 2023 model is just the same. 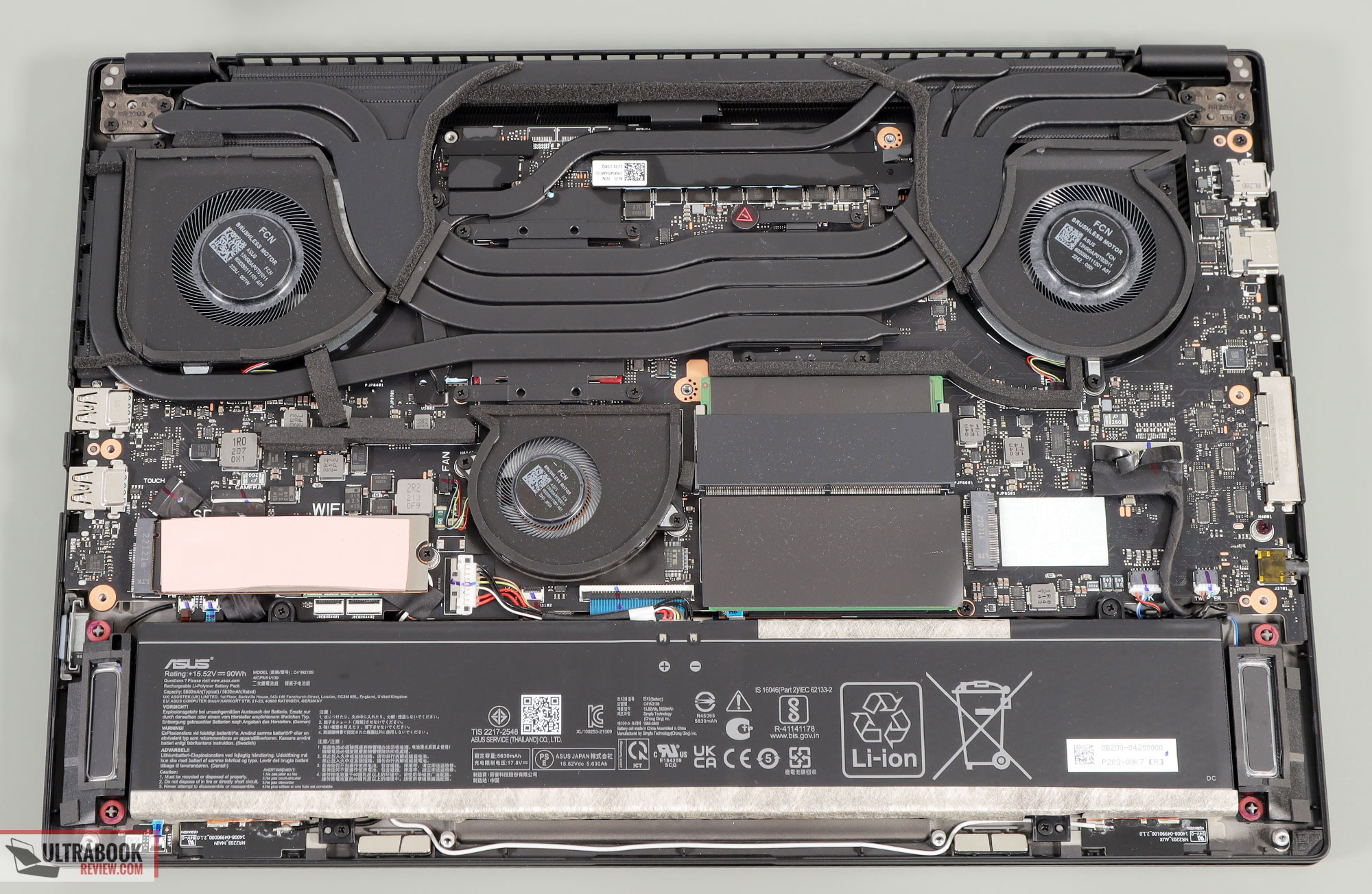 This cooling design allowed the X16s that we’ve tested to perform flawlessly and run quieter and cooler under load than the other ROG Zephyrus models with the more traditional dual-fan thermal module. I expect a similar behavior on the 2023 Flow X16 configurations, as the power settings between generations haven’t changed in any way, and the transition between the AMD/Intel platform should not impact things significantly in terms of heat/temperatures in combined loads.

You’ll still want to place this laptop on a raiser stand when running games and sustained loads for longer, as the fans are otherwise somewhat choked up while having the computer on a flat surface, as a result of the slim rubber feet implement in order to allow for the 2-in-1 format and the screen’s ability fold-back for tablet mode. This is not ideal, but it’s a quirk I can live with considering everything else offered in this series.

Look forward to my full review of the 2023 Asus ROG Flow X16 configuration in the weeks to come, as well as details on availability and prices.

For what is worth, the previous R9 + 3070Ti + miniLED configuration of the Flow X16 sold for around 2500 USD at launch, so this new model will realistically cost more. You should find better value with the mid-tier specs, though, with the QHD IPS display and perhaps an RTX 4060, although there’s going to be a noticeable difference in capabilities between the 4060 and the 4070 dGPUs, much like with the previous-gen Nvidia platforms.

That’s about it for now, but I’m curious about your thoughts on this 2023 update of the Asus ROG Flow X16 series and the decision of switching to an Intel platform. Get in touch down below, in the comments section.