This article is a follow-up of our 2022 ROG Zephyrus G14 review, where we’re going to check out the laptop’s performance and overall behavior on USB-C power and when connected to an external monitor, with or without the lid closed.

USB-C power performance is relevant in case you don’t want to carry around the bulky and heavy (.73 kg – 1.6 lbs) included charger when traveling or during your daily commute to work/school. In this case, you can plug in the laptop via the USB-C port, and we’re going to explain what to expect from the computer in this case.

External monitor performance should also be interesting to some of you, in the eventuality that you want to use the laptop as a dock, connected to external peripherals and external screens. We’re going to analyze two situations, when you’re keeping the laptop open and sitting on the desk with or without the main display switched on, as well as the case when you’ll close the lid and put the notebook in a vertical stand.

These aside, if you’re interested in the 2022 Zephyrus G14, you’ll find our in-depth analysis in the detailed review, as well details on what to expect in terms of performance with the AMD Rzyen 9 6000 processor, the Radeon RX 6800S graphics chip, or the RDNA2-based Radeon 680M iGPU, in these dedicated separate articles (to be updated).

For this test, I’ve plugged in the laptop via the 135W USB-C charger that comes with the MacBook Pro, as that’s what I had around at this point. I do like how this white charger pairs with the white version of the laptop.

It would be interesting to follow up with a deeper look at the USB-C behavior on a compact 100W GAN charger or the Asus proprietary ROG 100W charger, but I didn’t have any of these available at the time of the article – I’ll update if I get to retest.

According to the specs, the 2022 Zephyrus G14 supports USB-C power delivery at up to 100W. The Turbo profile is not available on USB-C PD – PowerDelivery, so Performance is the fastest available profile. That means the CPU and GPU will not run at their maximum potential on USB-C power, which shouldn’t be a surprise.

Furthermore, Asus designed their laptops to be able to work at higher than 100W power-use on the PD mode, in order to provide higher performance than what a 100W hard-limit would impose, even if that means the battery will slowly discharge in the process.

That’s especially the case on the Performance mode, in which case the battery discharges by up to 50% per hour in sustained CPU+GPU loads, and less so on the more power-limited Silent mode, as in this case you’re only losing up to 25% of the capacity per hour. The battery drains out only with sustained combined loads, and not with CPU-only loads or everyday multitasking.

With that in mind, let’s firstly go over a series of performance tests on the Performance PD mode vs the Performance and Turbo modes with the laptop plugged-in via the included 240W charger.

We start by testing the CPU’s sustained multi-core performance by running the Cinebench R15 test for 15+ times in a loop, with a 1-2 seconds delay between each run. 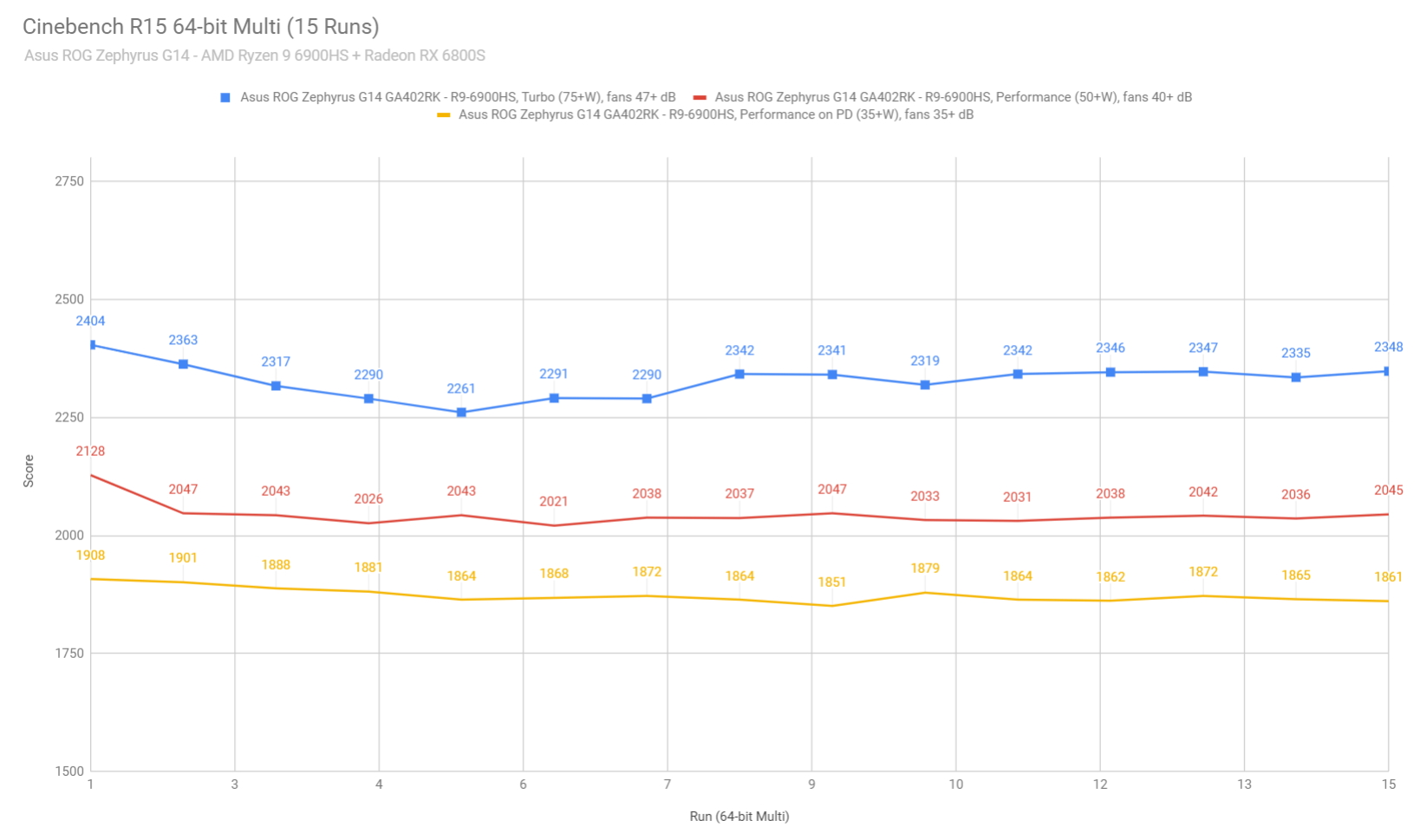 That means the sustained CPU performance on USB-C is about 10% lower than on the plugged-in Performance mode, as a result of the processor running at lower power. That laptop does run quieter, though.

Compared to the Turbo mode, the G14 on PD Performance ends up ~25% slower in this test, but is also a much more enjoyable experience in terms of noise and heat.

I’ll also add that the battery does not discharge at all in this CPU-only sustained test. All this info is detailed in the HWInfo stress log down below. 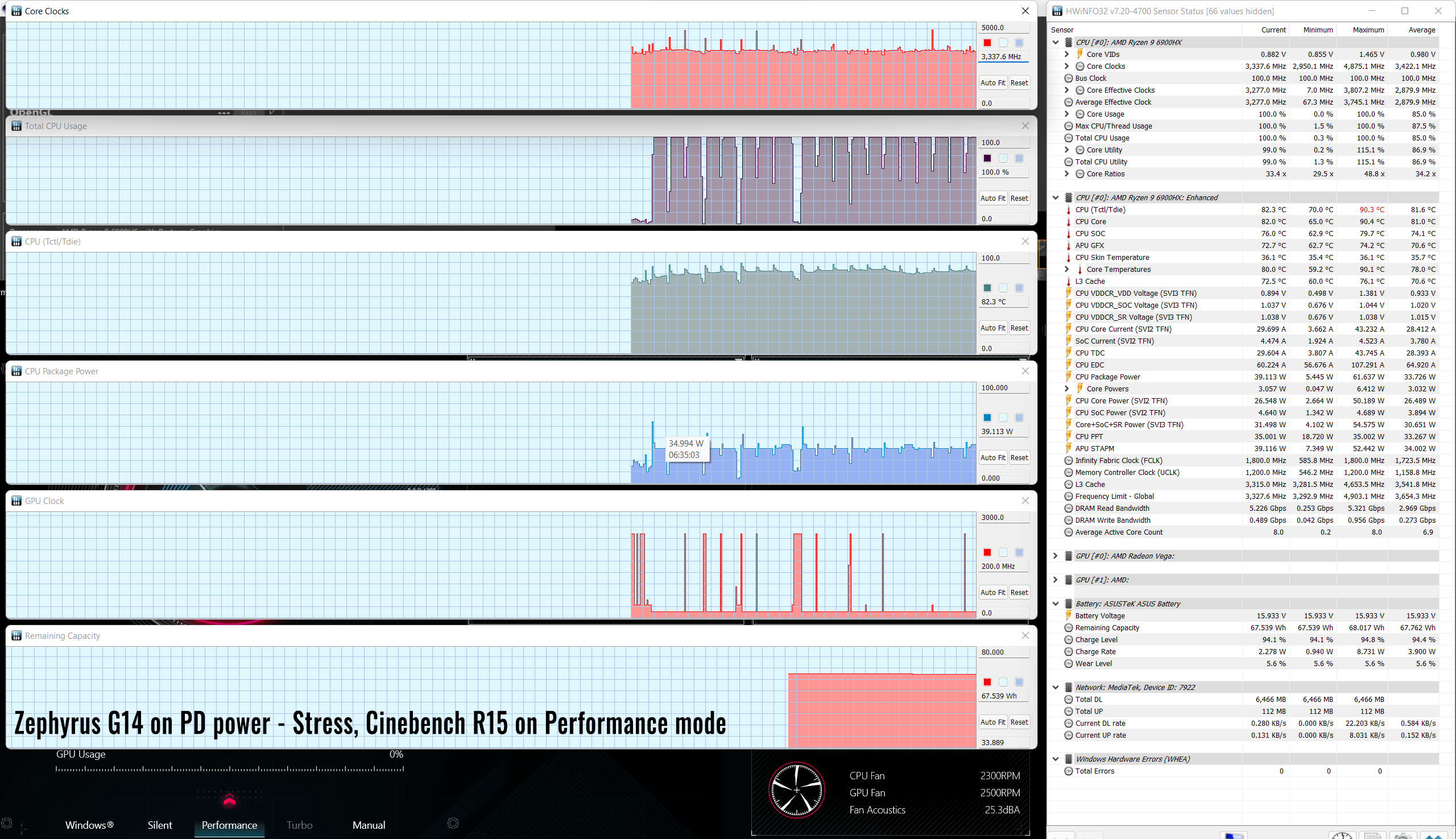 Next, here are some synthetic benchmarks:

On PD USB-C power, the system’s overall performance drops by roughly 3-10% in comparison to the plugged-in Performance mode.

At the same time, compared to the Turbo plugged-on mode, the PD performance drops by somewhere between 10-25% in the CPU tests and 15-30% in the GPU tests.

Moving further, let’s dive into some real-life workloads such as Blender and the multitude of apps included in the SPECviewperf 2020 suite of tests, such as 3DSMax, Maya, SNX, or Solidworks. I didn’t get to run the Puget Adobe tests on PD power.

Much like in the synthetic benchmarks, we’re looking at a ~20% drop in CPU performance and 15-25% in the combined loads that require both CPU and GPU processing power, versus the max-performance Turbo profile with the laptop plugged into the wall via the main charger.

Next, let’s look into some games. For these tests, we switched the laptop’s MUX on the discrete GPU mode

The framerates that the system is capable of are almost identical on the Performance modes on either USB-C or main-charger power.

However, that’s only possible because the combined system power jumps over 100W on PD, and this causes the battery to discharge at a rate of between 30 to 50% per hour. That means you should realistically expect 2-3 hours of gaming runtimes on USB-C power, on the Performance mode.

The battery is going to discharge on the Silent profile as well, but at a much slower pace, which should offer 4-6 hours of game time. The framerates take a dip compared to the other profiles, as the GPU is more aggressively power-limited on this mode, but you’re still getting playable framerates at FHD+ resolution in most titles, even with Ultra settings. Lowering the graphics to Medium would ensure 60+ fps even in recent titles, with hours of runtime, good temperatures, and quiet fans.

Here are some gaming logs to go through, on both Performance and Silent USB-C modes. 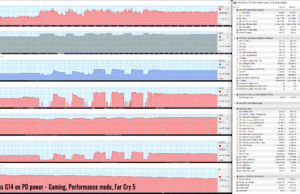 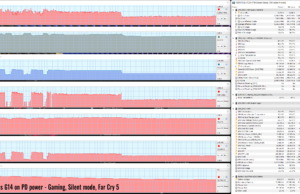 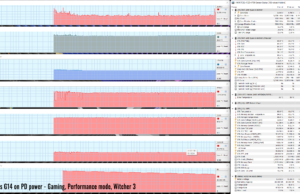 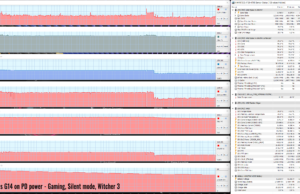 Zephyrus G14 on an external monitor, via USB-C DP

This next section goes over our findings when connecting an external monitor to the Zephyrus G14 via one of the USB-C ports.

Choosing to hook up an external monitor via the iGPU port (left side) means that the laptop is not going to wake up the main dGPU with everyday use, and that allows for minimally lower internal component temperatures than when connecting through the dGPU (right side) and having the dGPU always active. 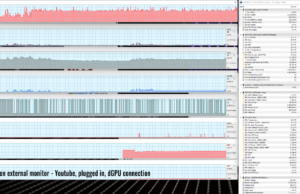 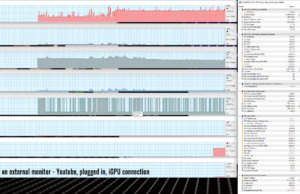 This makes an even greater difference if you’re running the laptop on battery while connected to the external monitor.

In our tests, we ran a Youtube video on an external screen connected via USB-C. Hooked into the left USB-C port, the laptop draws about 9W of power per hour and will last 8+ hours on a charge, while when connected through the right USB-C port, the power draw jumps to 22W per hour and limits the battery life to only 3+ hours with the same task. This is a major difference. 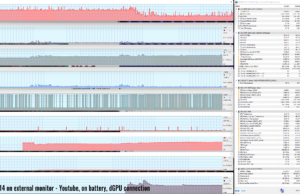 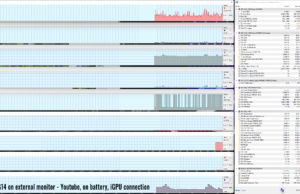 When it comes to running more demanding loads and having the laptop plugged in via the main charger, there shouldn’t be any noticeable differences when connecting an external monitor via either of the USB-C ports.

I was expecting a difference with games, as I was assuming that outputting straight from the dGPU-connected USB-C port would impact our findings in a positive way. It didn’t, as you can see down below.

I also haven’t noticed any major differences in frequencies or temperatures when outputting games via either of the two ports, on Turbo mode.

For these logs, the Zephyrus G14 sits on the desk, with the lid open and the main display switched off. 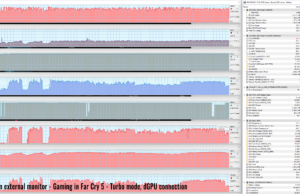 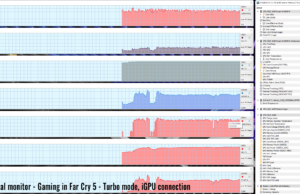 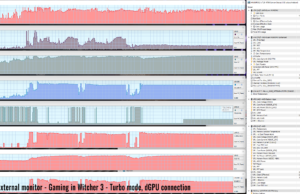 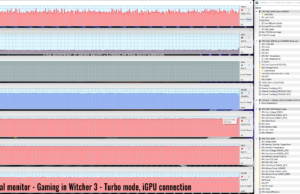 I was also looking forward to testing the behavior and performance of the laptop with the lid closed, on Turbo.

Thing is, for some reason the laptop goes straight into hibernation mode after only a few minutes of starting the test, so I’d reckon the thermal module cannot properly cope with the heat with the lid closed at the higher power settings available on Turbo, even if the laptop is placed vertically and the intake fans on the bottom are completely unobstructed. This has changed with the latest BIOS 308 update, but mostly because that BIOS limits the combined CPU+GPU power for the Turbo mode, limiting the performance. Future software tweaks should be able to address this behavior and hopefully, allow for Turbo use with the lid closed.

At this point, I only managed to get this to work with the lid closed and the laptop in a vertical position on the Performance mode, in which case the temperatures are looking good, but the performance is also limited, as explained in our review. 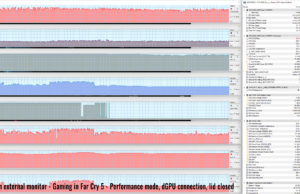 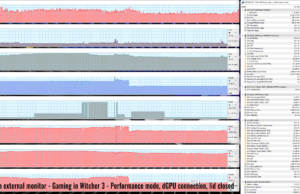 One final aspect to mention here is that once Asus/AMD release the update that will add USB4 support for the USB-C port on the left side (with the iGPU connection), I expect you to be able to power the Zephyrus G14 exclusively via USB-C from a compatible monitor with PowerDelivery support, without having to even hook up the main charger in. But that’s a topic for another article, when USB4 will be eventually available.

That’s about it on this follow-up to our main review of the 2022 Zephyrus G14 GA402. I’m waiting for your feedback and questions down below, so get in touch.