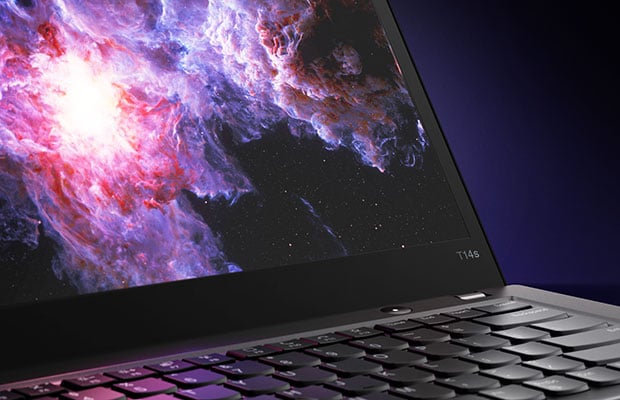 Lenovo are updating their entire lineup of Thinkpad T notebooks for 2020, moving into the new decade with a rebranded nomenclature. This way, the ThinkPad T14 replaces the existing T490/T480 versions, with a ThinkPad T14s ultraportable variant, while the 15-inch ThinkPad T15 follows up on the T590.

The ThinkPad T lineup has undertaken some controversial changes in recent years, with effects on upgradeability or battery life, both iconic features of the series, dating back from the IBM days. Unfortunately, that’s not changing with the 2020 updates, which are merely minor updates of the previous lineups, built on the same chassis, much like the updated 2020 ThinkPad X1 Carbon in comparison to the 2019 X1 Carbon.

The major update is the much-expected move to more recent hardware, with versions based on either 10th gen Intel Comet Lake vPro platforms, available from Q2 2020, or AMD Ryzen 4000 Mobile Pro, hinted for a later date. We’re going to cover those in a future article, and focus on the Intel updates for now.

As far as we can tell, nothing has changed in terms of design, build and important features from the 2019 lineup, so reviews of the T490, T490s and T590 will paint a solid picture of what to expect from these new versions, if you’re planning on buying one before the actual reviews come out. You might want to hold on for those though, especially if you’re interested in going with some of the top tier configurations, as the big novelty with the upgrade to Comet Lake is the option to spec these notebooks with a six-core Intel Core i7-10810U vPro, which is pretty much a slightly higher clocked version of the more widespread i7-10710U.

However, some of the previous ThinkPad T lineups (namely the T490s) struggled to keep the quad-core i7-8565U in check-in demanding loads, due to a rather lackluster thermal module, that’s why I look forward to finding how Lenovo managed to address this with the 2020 versions, and why I recommend waiting for the reviews.

Furthermore, you might be interested in the performance of the GeForce MX330 graphics optional on the T14/T15 models, some of the new screen options, whether Thunderbolt 3 x4 has been implemented this time around, or the capabilities of the WiFi 6 wireless bundled with the 10th gen Intel platform. We’ll update on these in future articles and our reviews. In the meantime, though, I’ve added specs sheets of the T14s, T14 and T15 updates next to their predecessors, so you can easily visualize what to expect from these 2020 models and what’s changed between generations.

The ThinkPad T14s remains the thinner and lighter option in the 2020 ThinkPad T lineup, at about 16-17 mm in thickness and from 1.3 kilos/2.8 lbs in weight. It’s available in multiple configurations, with different screen options, up to a Core i7 vPro processor, 32 GB of RAM (soldered), up to 2 TB of storage (single slot M.2 PCIe x4) and a 57 Wh battery (internal) with rapid-charge and USB-C charging. Dedicated graphics are not an option, and only reserved for the larger T14 and T15 models.

Looks like the WQHD screen is also no longer an option for the T14s and was replaced with a 4K panel instead, most likely the one already offered on the X1 Carbon lineup.

Furthermore, as mentioned earlier, you should look into how Lenovo are able to tweak the thermal module for the T14, given the issues on the T490s, especially if you’re looking at the six-core configurations that would require a higher 25W power allocation to excel.

The T14s also comes with either a black or silver casing, with a difference in materials and height/weight between them, as the Silver variant uses Aluminum for the hood, while the Black gets the CF hybrid alloy construction, just like the T490s before. As a minor novelty, the official literature mentions an updated Function row on the keyboard, but that’s only a change in functionality for the F9-F11 keys (what Lenovo calls UC – Unified Communications functions), like on the 2020 X1 Carbon.

The ThinkPad T14 is the slightly thicker, slightly heavier, more affordable and to the most-part, less compromised, alternative for the T14s.

Based on the experience with the 2019 ThinkPad T490, on whom this is based on, the increased height allows for a more capable thermal module that can cope with a 25W CPU and 25W GPU in demanding loads. That’s important, as the 2020 update gets not just options for the six-core i7-10810U CPU and future eight-core Ryzen Pro 4000 APUs, but also the updated Nvidia GeForce MX330 GPU. In all fairness, though, MX330 is merely a rebadged MX250, so don’t expect much in this field. Either way, the ThinkPad T14 is going to be one of the most powerful 14-inch laptops on the market, for the time being.

Of course, at the same time, this is not as compact, as lightweight or as nicer built as some of the alternatives out there, including Lenovo’s own T14s and X1 Carbon lineups. It makes up for these with the balanced implementation and competitive pricing, though. Win some, lose some. 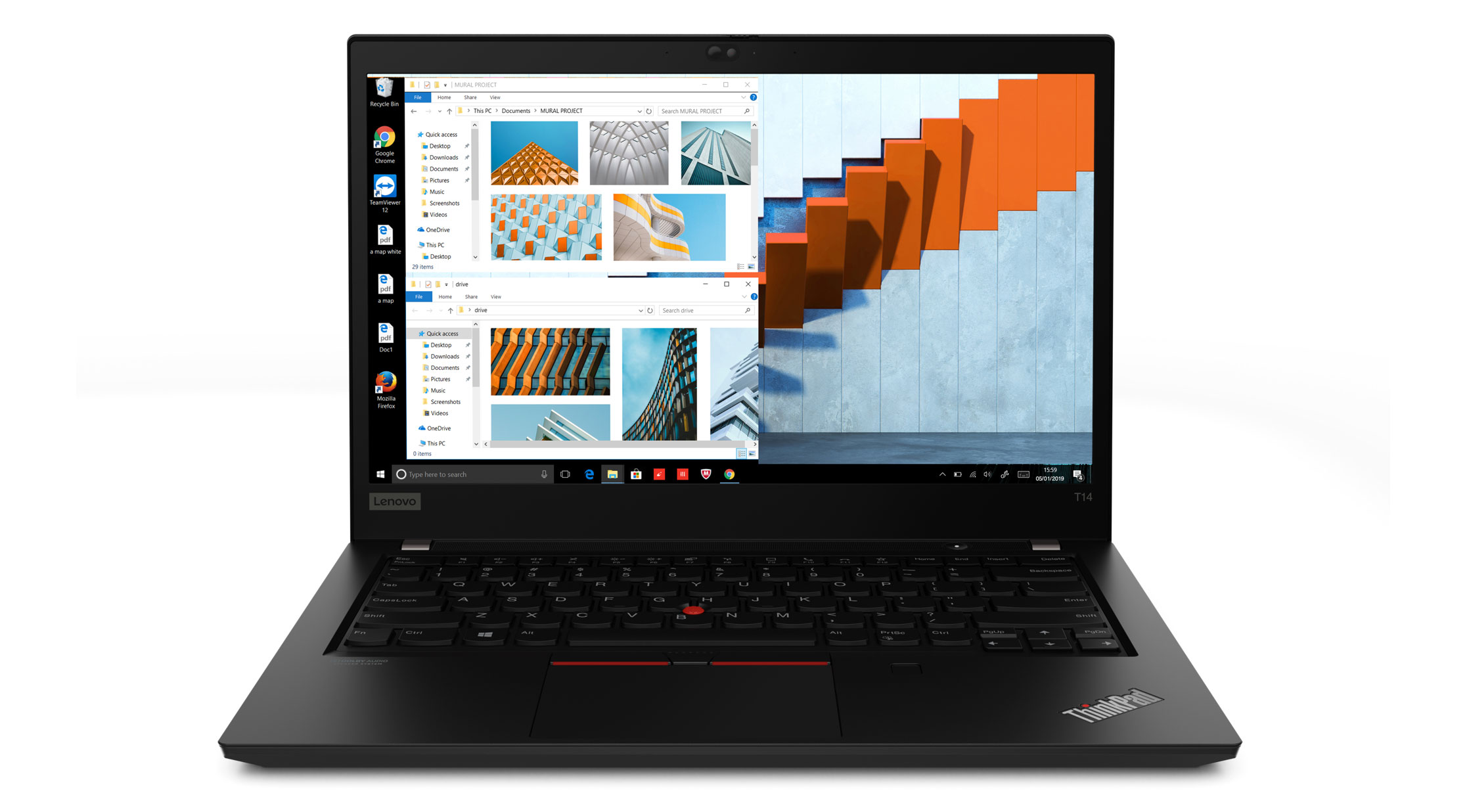 Nonetheless, too bad Lenovo didn’t update on the battery matter. Last year’s T490 got a lot of heat from die-hard users for dropping the upgradeable battery options of the past generations for an internal 50W battery, and the T14 is no different. That’s why, if battery life is also important among your criteria, I would only get this with one of the FHD screen options, especially the low-power variant. But even those might not suffice, as there’s still only so much that can be squeezed from a 50 Wh battery.

The ThinkPad T15 is an oversized version of the T14, with a full-size 15.6-inch display, a full-keyboard that includes a numerical section, a slightly tweaked thermal module, and a slightly larger 57 Wh battery.

However, a lot of space goes unused inside this 15-inch chassis, which could have easily incorporated a larger battery or better hardware. Lenovo opted not to, most likely as a cost-cutting measure and in order to not cannibalize on their higher-tier and higher-gross margin product, the Thinkpad X1 Extreme.

As a result, the T15 is aggressively priced, but whether a Core U/MX330 implementation is worth your money in a full-size 15-inch shell, that’s going to be up to you to decide. For me, the even more affordable, smaller and lighter 14-inch variant makes more sense.

All these are the Intel Comet Lake versions, while the availability and pricing for the AMD Ryzen 4000 ThinkPad T14s/T14 models will be communicated at a later date.