Lenovo are quietly announcing their 2023 lines of Thinkpad laptops and ultrabooks, starting with their lightest ultraportable design, the 2023 Lenovo ThinkPad X1 Nano Gen 3.

I just recently reviewed the 2022 X1 Nano gen 2 model and have it fresh in mind, so I can compare it with the 2023 update and share my thoughts on what Lenovo have and could have changed in order to make this a better product.

From the looks of it, though, the 2023 X1 Nano is the exact same chassis as the previous generations were, and most likely the same internal design as well. That means the gen 3 is only a hardware bump over the gen2, now available with 13th-gen Raptor Lake Intel processors, in either the consumer Core P (i5-1340P, i5-1360P – my estimations, to be confirmed) or the enterprise variants with vPro and extra functionalities (i5-1350P, i5-1370P – to be confirmed).

This is still an Intel Evo certified design, and an Intel-exclusive configuration.

Here’s a specs sheet of the 2023 ThinkPad X1 Nano 3rd generation next to the 2022 and 2021 models, and we’ll get in-depth on the important changes further down.

At this point, there’s still very little I can share about the 13th-gen Raptor Lake Core P mobile platform in comparison to the 12th-gen Alder Lake hardware, as the official specs are due to be released in a few weeks at CES. I do expect a similar hybrid design with various Performance Cores and Efficiency Cores, with a slight increase in IPC, clock rates, and efficiency, as well as various other generational tweaks.

The specs do mention that the 2023 X1 Nano is only available with 16 GB of memory, while the 2022 model could be configured with 32 GB on the top-tier model with the i7-1280P processor. This might be subject to change, or it might suggest that an i7-1380P 14Core/20Thread CPU will no longer be offered for the 2023 model. We’ll see. Other than that, storage is still an M.2 2242 format on this chassis, which means you’re only getting up to 1 TB of storage space, at least for the time being.

With that out of the way, as we’ve found out in our review of the X1 Nano gen 2, throwing a Core P platform inside a thin chassis with minimalist cooling is not allowing the hardware to run at its full potential in sustained loads. Hence, the Core i7-1270P variant of the X1 Nano stabilizes at only 13W of sustained power in our tests, a fair bit away from the 28W design TDP of the Core P hardware. That translates into a snappy experience with daily use and multitasking, but limits the capabilities in any demanding sustained activity, where the X1 Nano gen 2 trailed other thin-and-light 13-inch designs by a fair amount.

For the 2023 X1 Nano gen 3, though, Lenovo’s reps briefly mentioned an increase in sustained platform power, and that could translate into better-sustained performance. They are mentioning 21W sustained power for the 14-inch ThinkPad X1 Carbon gen 11 2023 update, but didn’t give any numbers for the X1 Nano.

Now, based on my experience with the previous X1 Nano models, this chassis should be able to sustain somewhere around 18-20W of power on the high-performance profile as long as Lenovo are willing to bump up the fan speeds on this power mode, and allows the CPU to stabilize at around 75-80 degrees Celsius sustained. For the gen 2, the fan ran very quietly at around 32 dBA even on the Best Performance profile, so the system had to cut down on the power in order to keep thermals at bay (~ 70 degrees Celsius). Other OEMs and even Lenovo on other designs are pushing their fans closer towards 40 dBA on the max-performance modes, which is fine for the rare occasions you’ll want to run anything demanding on your laptop.

For what is worth, here’s how the X1 Nano gen2 (13W sustained, 32 dBA fan) compares to the Slim 7i Carbon (20W sustained, 37 dBA fan), both being thin 13-inch designs. The sustained CPU performance difference between them is around 15-18%, and with some tweaking, perhaps this should be possible on the gen3 X1 Nano as well. 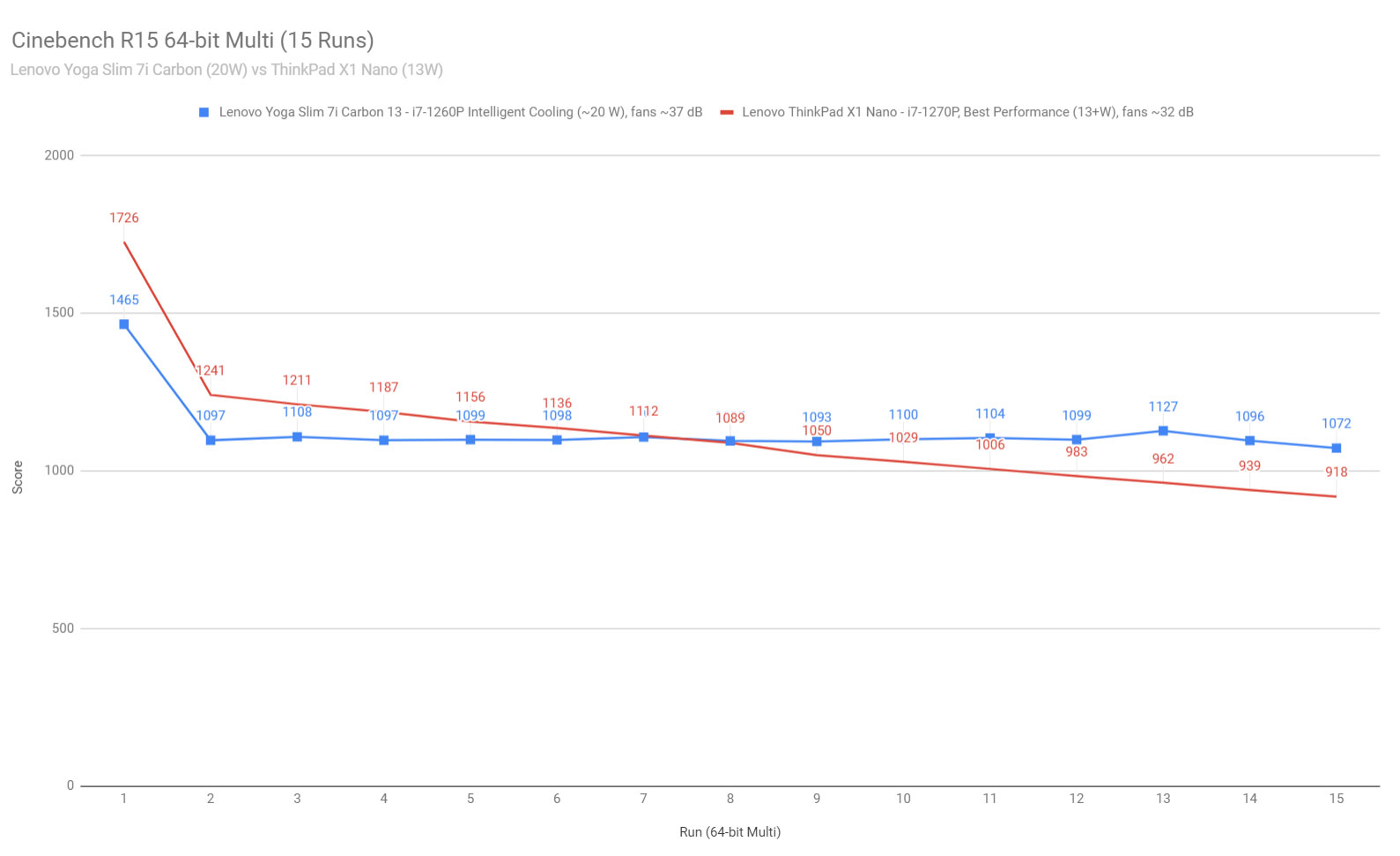 Of course, all these are just my suppositions at this point, and we’ll have to properly review this to find out how Lenovo were able to balance things out this time around, and whether this gen3 is any faster in sustained loads than the previous gen2, or not. I’ll update this once I know more.

Now, with this part out of the way, the 2023 X1 Nano is the same ultraportable laptop as before, so go through my review of the ThinkPad X1 Nano gen 2 for my in-depth thoughts on the design, practicality, inputs, screen options, etc. That’s also the reason I’m using pictures of the gen2 model for illustration purposes in this article, alongside some renders for the 3rd-gen further down.

In just a few words, this is one of my favorite ultrabook designs, albeit I admittedly might be a little biased towards ThinkPads as a long-time ThinkPad owner and fan. 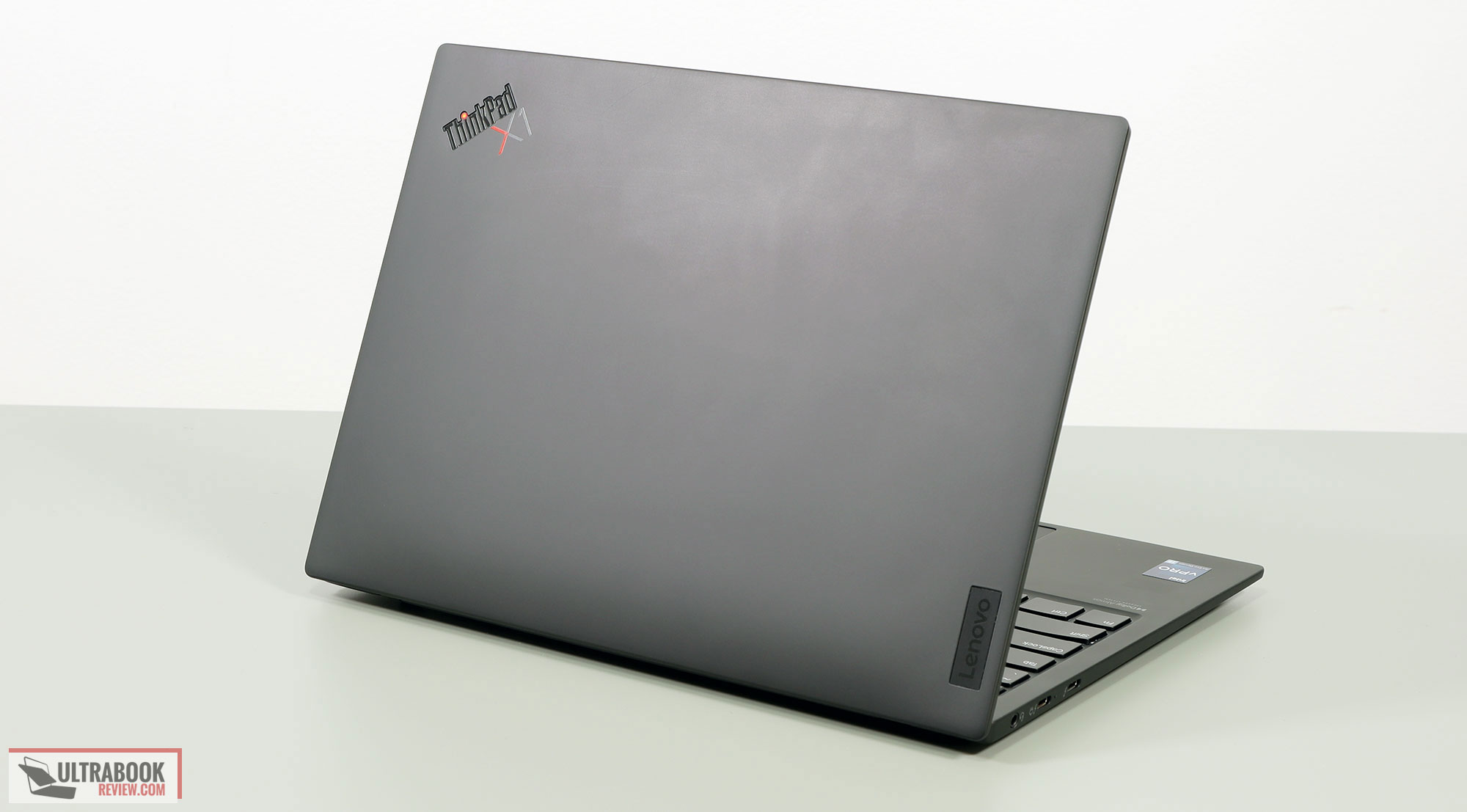 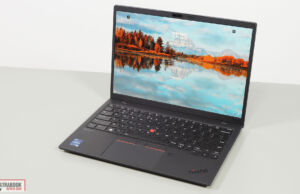 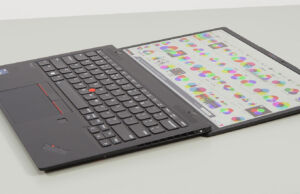 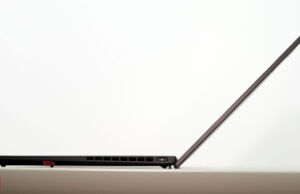 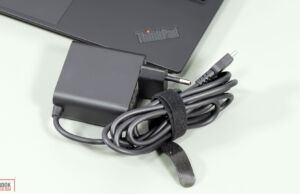 There’s one aspect worth at least mentioning, at it concerns sustainability. For the 2023 Thinkpad models, Lenovo are using 90% recycled magnesium for the main chassis alloys, as well as a fully-recyclable wrapping/box design.

On the performance side, expect this laptop to be a snappy daily driver and multitasker, working well both on battery power and when plugged in. This charges via USB-C, and comes with one of the most compact USB-C chargers you’ll find on a laptop, adding up to the series’s portability factor. There’s only enough room for a ~50Wh battery inside, though, so don’t expect a full-days of work out of a charge. The Alder Lake gen2 variant averaged 3-5 hours of daily use runtime, but hopefully, efficiency will improve with the 13th-gen hardware in the 2023 model.

Aside from the deficiency in sustained performance that I’ve already discussed above, which might or not matter to you based on what you’ll plan on running on your device, my main complaint about the ThinkPad X1 Nano chassis concerns the miniaturized IO that consists of only USB-C ports and an audio-jack, unlike on all the other ThinkPads that offer full-size ports. On top of that, I’d also appreciate some better-quality speakers and perhaps an option for a high-gamut display. I doubt these have changed in any way, though, as just like in the past, the 2023 X1 Nano is still only offered with the 13-inch 16:10 IPS display, with 450 nits of brightness and 100% sRGB gamut coverage, available in either a matte or a touch variant. 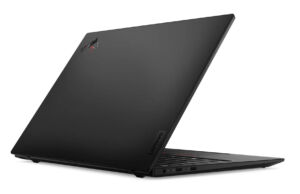 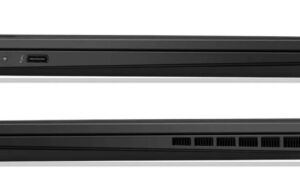 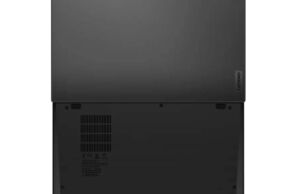 As far as pricing and availability go, the 2023 ThinkPad X1 Nano is expected in stores around April 2023, starting at $1749 MSRP. For comparison, the gen2 started at $1649, but is now available from ~1150 USD or so. You’re nonetheless paying a premium for the format with this series, but you’re also getting one of the better ultra-light designs on the market, as long as you can leave with the quirks. And hopefully, with this 2023 Raptor Lake generation, the X1 Nano can deliver longer runtimes and better performance in sustained workloads.

Anyway, look for our review in the months to come, and in the meantime, let me know what you think about this 2023 model-year Lenovo ThinkPad X1 Nano 3rd generation update.