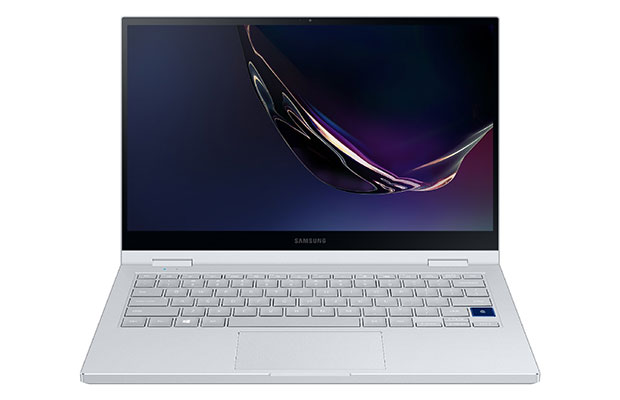 Back in October 2019, Samsung announced they’re working on a lineup of QLED ultrabooks that included clamshell (Galaxy Book Ion) and 2-in-1 (Galaxy Book Flex) models, with both 13 and 15-inch screens. They were dubbed for availability in 2020.

While those are still not yet available in stores, Samsung also hinted another variant of the 13-inch convertible model, the Galaxy Book Flex Alpha (α), as a more affordable version of the standard Flex, starting at $830. If interested, a wider selection of affordable laptops nd ultrabooks is available in this article.

What’s surprising is that the Galaxy Book Flex Alpha does not compromise on the QLED screen, build and hardware, offering a mix of features from the more expensive Ion and Flex models, with only some exceptions. That’s why this could become one of the most competitive Windows hybrids of 2020 and a serious contender even for higher-tier 2-in-1 convertible laptops such as the HP Spectre x360 or the Dell XPS 13 2-in-1.

We’ll get in-depth on the laptop’s particularities down below, but first, here’s a quick specs sheet of the 13-inch Flex Alpha, regular Flex and the Ion.

The Book Flex Alpha is mostly a crossbreed between the standard Flex and Ion. It’s rather similar in design and materials to the Ion, but gets a fully convertible touchscreen, like the Flex. That’s mostly why the Flex Alpha is also slightly thicker and heavier than the other options.

This more affordable model also gets the more complete ports selection of the Galaxy Book Ion as well as the keyboard implementation with slightly deeper strokes than on the premium Book Flex. That means you’re getting Thunderbolt 3, full-size USB and full-size HDMI connectors, as well as microSD card-reader, but you need to plug in a regular barrel-plug charger to fill up the battery. For comparison, the Book Flex rellies entirely on USB-C connectivity and also comes with USB-C charging, yet there’s no confirmation whether the Ion and the Flex Alpha support USB-C charging as well, through their Thunderbolt 3 port.

The keyboard is standard, will full-size keys and good spacing, but integrates a finger-sensor in an unusual position, just below the Enter key. That makes the right Shift tiny, something those of you who actually use that key should be aware of.

The Flex Alpha also shares the hardware specs of the Ion. Details are still rather scarce for now, but from what I can tell, both are based on Intel Come Lake hardware with DDR4 RAM and NVMe storage. No word on whether Samsung will implement the six-core i7-10710U on these models, or settle for just the four-core CPU options.

That aside, the Alpha is limited to only 12 GB of RAM and 512 GB storage, while the other get more RAM and bigger drives. SSDs are upgradeable on all models, but the RAM is soldered. The premium Galaxy Book Flex is also built on an Intel IceLake platform with improved graphics performance and support for faster and more efficient LPDDR4s memory. 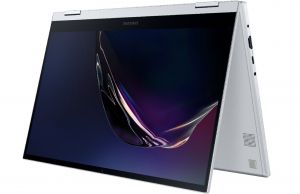 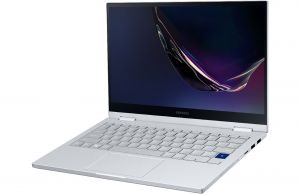 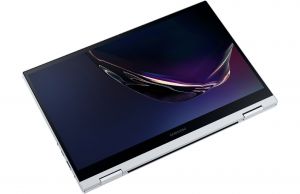 Another is the lack of a siloed SPen, that comes included on the Flex and holstered in its silo. Finally, Samsung boasted the Qi PowerShare capabilities of the Flex and Ion, which would allow charging your phone or accessories simply by placing them on top of the charging area on the lid. No word on this feature for the Flex Alpha, so we can assume it won’t get it.

Finally, the entire 2020 Galaxy Book lineup gets a similar QLED display with FHD resolution and up-to 600 nits of brightness. The high brightness and punchy colors are the main aspects differentiating QLED (Quantum Dot LED) panels from the regular LED IPS screens out there, but we’ll have to wait for review units before concluding color accuracy, uniformity, flickering, and the panels’ overall worth. It’s important not to confuse these with OLED screens, though, they’re definitely not the same thing.

For now, we’re hyped out by this Samsung Galaxy Book Alpha and if Samsung nails quality control, this could be one of the best mid-range 2-in-1 laptops of 2020, next to devices like the HP Envy x360, Dell Inspiron 13 2-in-1 or the Asus ZenBook Flip 13.

Availability is still set for sometime around the first half of the year, though, so it might be a while until we get them in stores. But if not in a hurry, they could be worth the wait. At the same time, keep in mind that Samsung laptops are not worldwide available, so if you’re in Europe, for instance, you’re not going to get them.

Disclaimer: Our content is reader-supported. If you buy through some of the links on our site, we may earn a commission. Learn more.
Andrei Girbea, Editor-in-Chief. I've been covering mobile computers since the 2000s and you'll mostly find reviews and thorough guides written by me here on the site.
← Previous Story Dell Latitude 9510 clamshell and 2-in-1 – premium lightweight 15-inch notebooks
Next Story → Samsung Odyssey CTG9 49-inch ultrawide 5K monitor, vs LG 49WL95C, Samsung CRG9