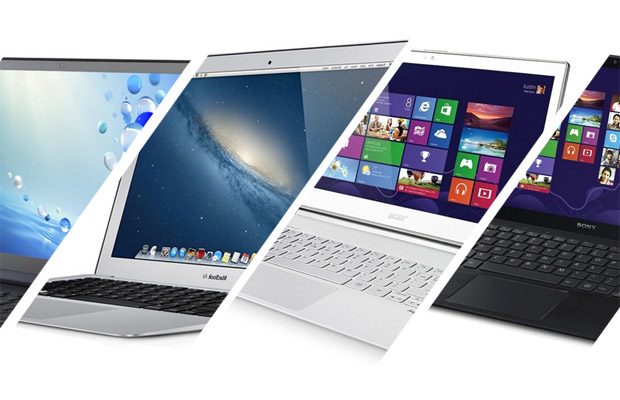 I’ve told you a couple of things about the Samsung ATIV BOOK 9 Plus in a previous article and in this one we’re going to see how the Book 9 Plus stands when compared to some of its most known rivals: the Sony Vaio Pro 13, the Apple Macbook Air and the Acer Aspire S7.

For starters, it’s worth noting that the Samsung, Sony and Acer devices are all premium ultrabooks, some of the best you can find these days on the market. The MBA is not an ultrabook per se, but is the most popular thin and light laptop of the moment.

Price wise, all of these sell for North of 1 grand and can easily go above $1500 for the beefier configurations. But if you do want the best ultraportable these days, that’s the price you’ll have to pay for it.

Anyway, let’s jump to it and get in depth with these devices. And if you have any questions or things you might want to add, make sure to leave your comments at the end of this article, I’ll be around to reply

Let get one thing straight: all these machines look amazing. But they are different. Acer for instance use aluminum and glass for the Aspire S7, which is available in a silver or a white version. Samsung went for an ash black aluminum unibody on their ultra-slim ATIV Book 9 Plus, while Apple sticks to their successful recipe, with a clean aluminum unibody for the Air. Last but not least, Sony chose fiber carbon for their Pro 13, which makes the entire thing very light, but at the same time annoyingly flexible, as you can see from my detailed review of this machine.

Those aside, all these devices have a similar footprint. The Vaio stands out with its light weight, as mentioned above, while the Samsung and Acer units are slimmer than their competitors. 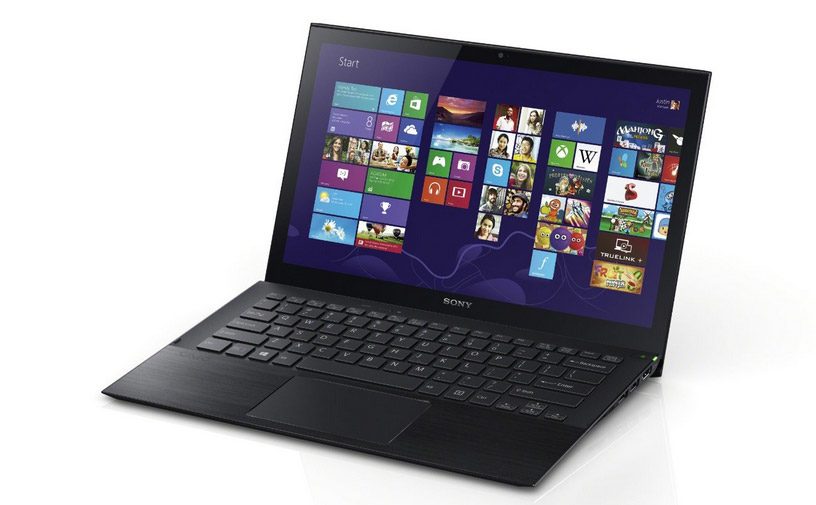 The Vaio Pro 13 is a light and aggressive looking ultrabooks

Around the sides you’ll find a good mix of ports on all of these, with USB ports, card-readers and various video-output options. Each manufacturer went for its own approach, but if I were to pick one here, it would be the Vaio Pro 13, with its Full-size HDMI connector and the Ethernet to WIFI dongle integrated withing the power brick (you can read about it in the review).

Lifting the lid covers, you’ll find the same premium finishing on the inside, plus spacious palm-rests.

When it comes to the keyboards, things are a bit complicated. With such thin laptops, rather shallow keyboards were expected, and the ones on the Samsung and Sony offer the poorest feedback. But you can get used to them.

Even so, the Macbook clearly wins here, with its classic chiclet keyboard, good layout and soft rubbery keys. The keyboard is backlit of course, but that’s the case with all the others as well.

Design wise, all manufacturers went for black keys, except for Acer, that chose silver keys on their unit, that unfortunately creates no contrast with the aluminum used for the area around it.

Acer went for silver keys on the S7

The MBA takes all the praises when it comes to its smooth and precise trackpad as well, and none of the Windows based machines can actually match it.

On paper, the Samsung outakes the competition here, with a 13.3 inch 3200 x 1600 px IPS panel. In practice though, that’s more or less an overkill, given Windows’ scaling difficulties, as some interface elements are going to be way too small and difficult to access, especially in desktop mode.

That’s why I’s rather have the Full HD IPS panels on the Sony and the Acer, also touchscreens. The Vaio Pro 13 actually displays more vibrant colors, thanks to Sony’s Triluminos technology, but you’ll be just fine with the screen on the Aspire S7 as well.

The MBA on the other hand packs a subpar screen, which is basically similar to what we’ve seen on Apple’s ultraportable in the last years: a standard TN panel with 1440 x 900 px resolution. In other words, it lacks the pixel density, but what’s more annoying, it fails to compete when it comes to contrast, colors or viewing angles. On the other hand, the MacBook packs a non-glare display, which makes it more comfortable to use outside, something I for one would pick over a glossy touchscreen, but that doesn’t compensate for all the other aspects. 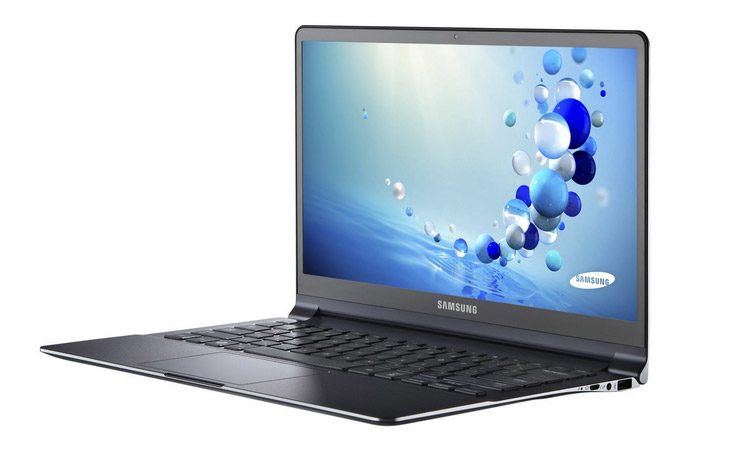 Samsung packs a high-density screen on their Book 9 Plus

Hardware wise, in theory, all these devices are fairly similar, packing SSD storage and Intel Haswell platforms. In practice, there are some things that set them apart.

For starters, it’s worth noting that all the MBA configurations bundle Intel’s HD 5000 graphics (the i5 and the i7 ones), while most of the laptops settle for a slower Intel HD 4400 chip. In practice, you’ll feel the difference when running games or editing videos, and not when it comes to multimedia content. Sony does offer a Core i7 + HD 5000 graphics option of their own, but only in the US for the time being.

Those aside, all these laptops can take up to 8 GB of RAM, and while Acer offers 8 GB of memory by default for their cheapest model, all the others only bundle 4 GB on the base versions. You also get 128 GB SSDs on all of these starting configs, with options for up to 256 GB of space on the Samsung and Acer, and up to 512 GB on the Sony and Apple devices. It’s also worth noting that not all of these SSDs offer the same write/read speeds, the Vaio and especially the Macbook, with its PCIe storage, taking the praises here.

All these devices are going to run fairly cool and quiet when used lightly and at the same time, can get a bit noisy (due to the fan trying to evacuate the hot air – especially the Aspire S7 and the Vaio Pro 13) and even a bit hot when pushed (especially the Macbook Air 13), but that was expected from such thin machines.

The 2013 Apple Macbook Air 13 can easily go for 12 hours of everyday use on a single charge, thanks to its large 54 Wh battery and the poorer, less energy hungry screen.

Samsung rates their ATIV Book 9 at 12 hours as well, but in practice you should expect around 8 to 10.

Sony only had room for a 38 Wh battery on the Vaio Pro 13 and that translates into about 6 to 7 hours of daily use. But you can buy an extra slice battery that will double the autonomy.

Acer went for an even smaller 35 Wh battery on their Aspire S7, which is enough for about 5 to 6 hours of use, but once again you can get a slice battery if you need more.

Connectivity and other details

Connectivity wise, all these devices offer Wireless and Bluetooth, but the MBA is the only one compatible with the latest 802.11ac standard, which does make it more future-proof. On the other hand, with the Sony Vaio Pro 13 we’re getting LTE connectivity and NFC, something not available for the others. However, it’s worth noting that many Pro 13 buyers have reported wireless issues on their units, so you might want to look more into that if you’re interested in this laptop.

Besides that, I should also mention that all these devices offer some good quality HD webcams and capable stereo microphones, that will do the job for your occasional Skype chats or Hangouts.

As of late November 2013, you can find all these devices in stores.

A similarly equipped Sony Vaio Pro 13 starts at around $1200, while the Samsung ATIV Book 9 Plus starts at $1399 (but can be found cheaper online). Last but not least, the cheapest Acer Aspire S7 sells for around $1349 these days or maybe a bit less, but comes with 8 GB of RAM by default.

You can find all these laptops discounted online though, and you should click the links above for more details about that.

At the end of the day, it’s up to you to choose between all these devices.

I for one am somewhat amused to see that the MBA is the most affordable in this selection, but that was expected, given how it lacks a premium touchscreen. Even so, it’s still sleek, light (not the lightest though) and powerful enough, plus lasts longer than any of its rivals on a charge. So unless you really want a touchscreen or you really want an IPS panel, the MacBook Air is a good pick for the money.

The Macbook Air is the cheapest of them all, and for many it might just be the best pick

If you do want those or if you’re after a Windows computer, you’ve got all the others to choose from and there really isn’t an obvious pick between them. Yes, the Sony Vaio Pro 13 is more affordable, lighter and can be equipped with a handful of nice extras (slice battery, LAN to WiFi dongle), but is disturbingly flexible.

The Acer Aspire S7 and the Samsung ATIV Book 9 Plus are expensive. On top of that, the S7 doesn’t really last long enough on a charge without the extra battery, that requires extra spending and makes it bulkier. As for the Samsung, it seems to lack any major flaws, but I’ll hold my final judgement for a detailed review.

Alright, that’s about it for now. Hopefully this article helped you understand the main differences between all these ultrabooks. If you have any questions, shoot them in the comments below, and make sure to subscribe to the site and follow me on Twitter, Facebook or G+ for more details on ultrabooks and portable technology.

And if you’re interested in more details about the best ultrabooks of the moment, my detailed article over here is surely something you have to read.