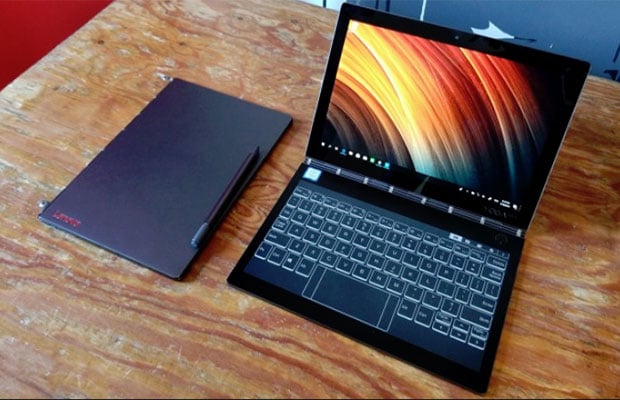 Lenovo updated some of their premium lines of notebooks for the second part of 2018 and first half of 2019, and in this article we’re going to tell you what to expect from these news lines and how they fare against the competition.

Aside from the new ThinkPad X1 Extreme that we’ve analyzed in a different post, a compact 15-inch laptop with premium specs and features, many of you should also be interested in the updated Lenovo Yogas: the S730, C930, the Yoga C630 and the Yoga Book C930, as well as the new offer of affordable Chromebooks.

The Yoga C630 is Lenovo’s first attempt at a Qualcomm powered laptop. The Yoga C930 is the new top-tier consumer convertible and a follow-up of the Yoga 910 and 920 lines we’ve reviewed in the past. The Yoga S730 is not a convertible though, as all the previous devices launched under the Yoga moniker, but rather a follow-up of the IdeaPad 720s, as Lenovo’s top-tier clamshell consumer ultraportable and competitor for the Dell XPS 13 and Asus Zenbook 13, among others.

The Yoga Book C930 builds on the original Book from 2016, as an unique laptop with two screens and no physical keyboard or touchpad. As for the updated 2018 Chromebooks, there are several to keep an eye on, and we’ll get in-depth about all these products down below.

Like mentioned earlier, this is Lenovo’s updated top-of-the-line convertible laptop for the second part of 2018. It builds on the Yoga 920 and 910, and hopefully borrows more aspects from the former, as the 920 was not such a great update, as detailed in the review.

Update: Our detailed review of the Yoga C930 is available over here. 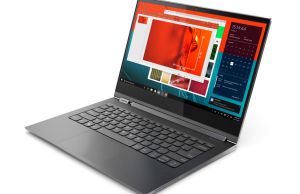 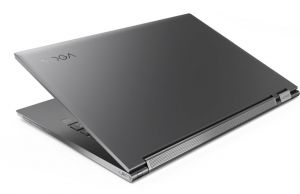 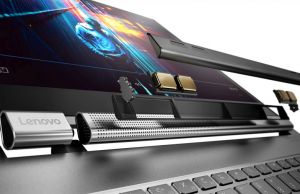 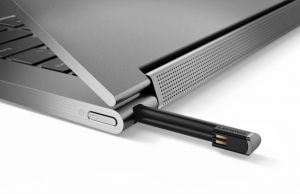 Not much has changed in terms of build and size, with the Yoga C930 weighing around 3 pounds and having an all-metal unibody chassis with a glass lid. The C930 is marginally thicker, but by only .02 of an inch.

It gets a similar keyboard (that can spell trouble, as I wasn’t a fan of the 920’s typing experience), as well as a similarly sized 13.9-inch screen with small bezels and a big chin underneath, with Pen support. A Wacom pen is included this time around though, and can be neatly tucked inside the laptop’s body on the back edge, a feature borrowed from the ThinkPad Yogas and something I sure wish more OEMs would implement on their hybrids.

On top of that, early previews mention a Dolby Vision capable FHD/UHD screen option for this 2018 update, which suggests they should be brighter and more vivid than the rather dull panels used on the 920.

The hinge has been completely revamped. The C930 no longer gets the wristband design implemented since the Yoga 3 Pro back in 2014, but a more standard bar hinge that integrates a sound-system, as well as some clever Lenovo branding. I look forward to hearing those speakers in real-life, but they should sound a lot nicer than the belly speakers of the previous generations. Lenovo claims these speakers are Dolby Atmos compliant, but don’t expect wonders, they should sound great for laptop speakers and pair nicely with the HDR screens, but there’s still only so much you can expect from a set of nail-sized units.

These aside, the Yoga C930 keeps the spartan IO of the 920, with 2x Thunderbolt 3 ports, headphone jack and one USB-A port, and surprisingly pretty much the same hardware specs, at least for the time being. With most other OEMs announcing Whiskey Lake laptops these days, the C930 is still built on KabyLake-R platforms, with up to 16 GB of RAM and single PCIe storage. The battery is smaller than of the previous version, at 60 Wh, but still at least on par or larger with what most competitors offer.

The Lenovo Yoga C930 is expected to start at around $1400 an will be available in stores from October 2018. That’s expensive, but at the same time about on par with the existing Yoga 920, and I’d expect most to find it a competitive pretender in the premium 2-in-1 segment. Stay tuned for updates and our future review.

The Yoga S730 is Lenovo’s first clamshell non-convertible laptop in the Yoga series and a follow-up of the highly rated IdeaPad 720s we reviewed in the past. Its screen does not rotate to 360 degrees, but can fall back flat to 180 degrees.

This could suggest a future rebranding of Lenovo’s consumer line of ultraportables, with the Yoga C (convertible?) including the 2-in-1 hybrids and this newer Yoga S (standard?) sub-section reserved for the classic clamshell formats. At the same time it also looks like Lenovo are selling this exact product as the Yoga S730 in the UK and Europe and as the IdeaPad 730s in the US, which is rather confusing.

Regardless, the Yoga S730 is a standard thin-and-light laptop with a compact and light metallic build, a 13.3-inch IPS FHD screen and narrow bezels around. It’s marginally smaller and thinner than the IdeaPad 720s and is built on Intel’s Whiskey Lake hardware platform, with DDR3 RAM and PCIe storage. 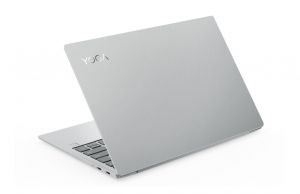 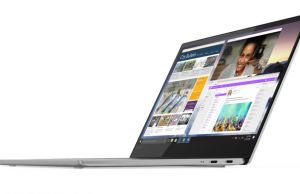 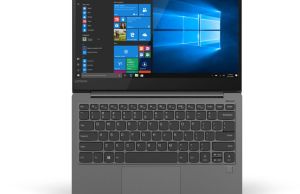 Lenovo advertises improved cooling over the 720s, which already had better cooling than the standard ultraportable, with a two-fan single-heatpipe design. Other changes are the addition of far-field microphones with support for both Cortana and Amazon Alexa, a layer of glossy glass on top of the panel (but no mention of touch), and a slightly redesigned IO, with 2x TB3 ports and a single full-size USB-A slot.

Lenovo didn’t get in-depth about the battery, but I’d reckon it’s still around 45-46 Wh as on the 13-inch predecessor, which is small by today’s standards, even if it comes with quick-charging this time around.

The 13-inch Yoga S730 ix expected to start at around $1000 and ship in November 2018. The previous IdeaPad 720s was also available with AMD hardware and in larger 14 and 15.6-inch variants, so I’d expect similar versions of the S730 to be available as well down the road.

The Yoga C630 WOS (Windows on Snapdragon) is a 13-inch 2-in-1 convertible built on the updated Qualcomm Snapdragon 850 hardware platform.

Qualcomm laptops ship with Windows 10 S and they’re designed as thin-and-lights for everyday use, with smaller/thinner form-factors, long battery life and features like always-on capabilities and integrated 4G connectivity. The early implementations built on the Snapdragon 835 platform (Asus NovaGo, Lenovo Miix 630) were still a fair-bit away from the existing Intel/AMD builds in terms of performance, but Qualcomm promises up to 30% improvements with Snapdragon 850. Personally, I’d recommend waiting for some proper reviews before picking up one of these, unless you’re an early adopter.

The Yoga 630 WOS is expected in stores around November 2018, with a starting price of $850 for a configuration with 4 GB of RAM and 128 GB of storage, so it’s by no means an inexpensive computer.

You’re not going to get the performance of a similarly priced Intel based laptop, but this should handle browsing, movies, music and other basic chores fine. Windows 10 S offers a limited experience on its own, and although you can upgrade it to Windows 10 Pro, a fair bit of software is still not compatible with the ARM build and even the programs you’ll be able to run will take a performance hit, as they’re emulated from x86. 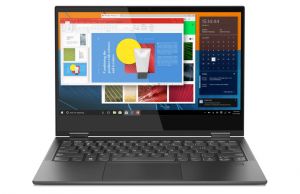 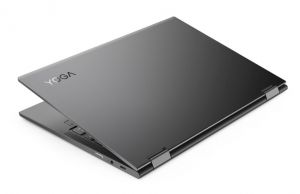 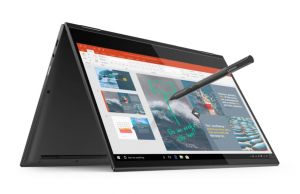 These should, in theory, be compensated by a handful of neat quirks:

On top of these, the Yoga 630 is nicely built metallic computer with a backlit keyboard and fair IO.

Overall though, while on paper this sure sounds like a great device , I wouldn’t expect it to be the ideal pick for the average user just yet, due to the performance and software compatibility gaps that still need to fill up. Enthusiasts might however find this a  good buy, especially if it can run Linux.

Disclaimer: Our content is reader-supported. If you buy through some of the links on our site, we may earn a commission. Learn more.
Andrei Girbea, Editor-in-Chief of Ultrabookreview.com. I've been covering mobile computers since the 2000s and you'll mostly find reviews and thorough guides written by me here on the site.
← Previous Story Lenovo ThinkPad X1 Extreme – vs Dell XPS 15, Asus Zenbook Pro and HP EliteBook 1050
Next Story → Lenovo Yoga 730 15 review (Yoga 730-15IKB model – i7-8550U, GTX 1050 graphics, UHD screen)