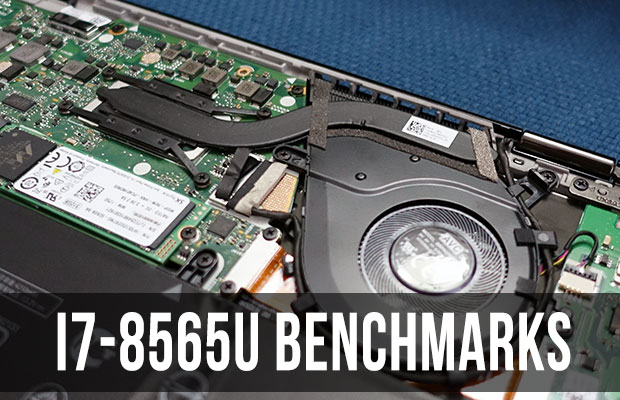 Intel’s Whiskey Lake Core U hardware platform is meant to power the majority of ultra-portable laptops available in stores between Q4 2018 and Q4 2019, when the next hardware update (Cannon Lake) is expected to be released.

This is Intel’s third refinement of the 14 nm lithography (14 nm++) and builds on the previous KabyLake and especially KabyLake-R iterations.

In fact, Whiskey Lake is by no means a major update and shares most characteristics with the existing KabyLake-R designs, with one significant addition: they’re able to reach higher Turbo Boost speeds, as long as that’s allowed by the implemented cooling solution.

In this article we’re taking a closer look at the higher-end Whiskey Lake processor, the Intel Core i7-8565U, a direct follow-up for the KabyLake-R Core i7-8550U. We’ll take you through the basic specs and traits, and then we’ll compare its performance and abilities to the i7-8550U, the mid-range Core i5-8265U and a few other previous generation processors, so you’ll know if this is the right pick for you or not.

Here’s a list of basic specs and how the i7 Core U line has evolved in the last years.

The Intel Core U i7-8565U is a quad-core/eight thread processor with a core clock speed of 1.8 GHz and the ability to Turbo Boost up to 4.6 GHz (4.6 GHz in single-core, 4.5 GHz in dual-core and 4.1 GHz in quad-core loads). It’s still a 15 W processor, but the OEMs can set cTDPs of 10 or 25 W on each implementation, based on the required balance between efficiency and performance. While that can gen confusing, I’d expect standard 15W implementations in most devices though.

These aside, the i7-8565U now gets 16 PCIe lanes, compared to the 12 of the previous generation, support for DDR4 2400 MHz memory and slightly increased maximum memory bandwidth, native support for USB Gen 3.1 and an improved audi0 DSP with support for wake-on-voice and improved voice recognition.

The diagram (below) also mentions integrated Gigabit WiFi and Thunderbolt 3, however these are both misleading, as a dedicated controller is still required for Thunderbolt 3, and the wireless solution is not entirely embedded on the SOC. Whiskey Lake processors use a CNVi wireless architecture (explained here), which means that the MAC components are integrated on the chip, but an external CRF companion is still required, which is represented by the Intel AC 9560 module you’ll find in most Whiskey Lake laptops, or some of the third party modules that are also supported. 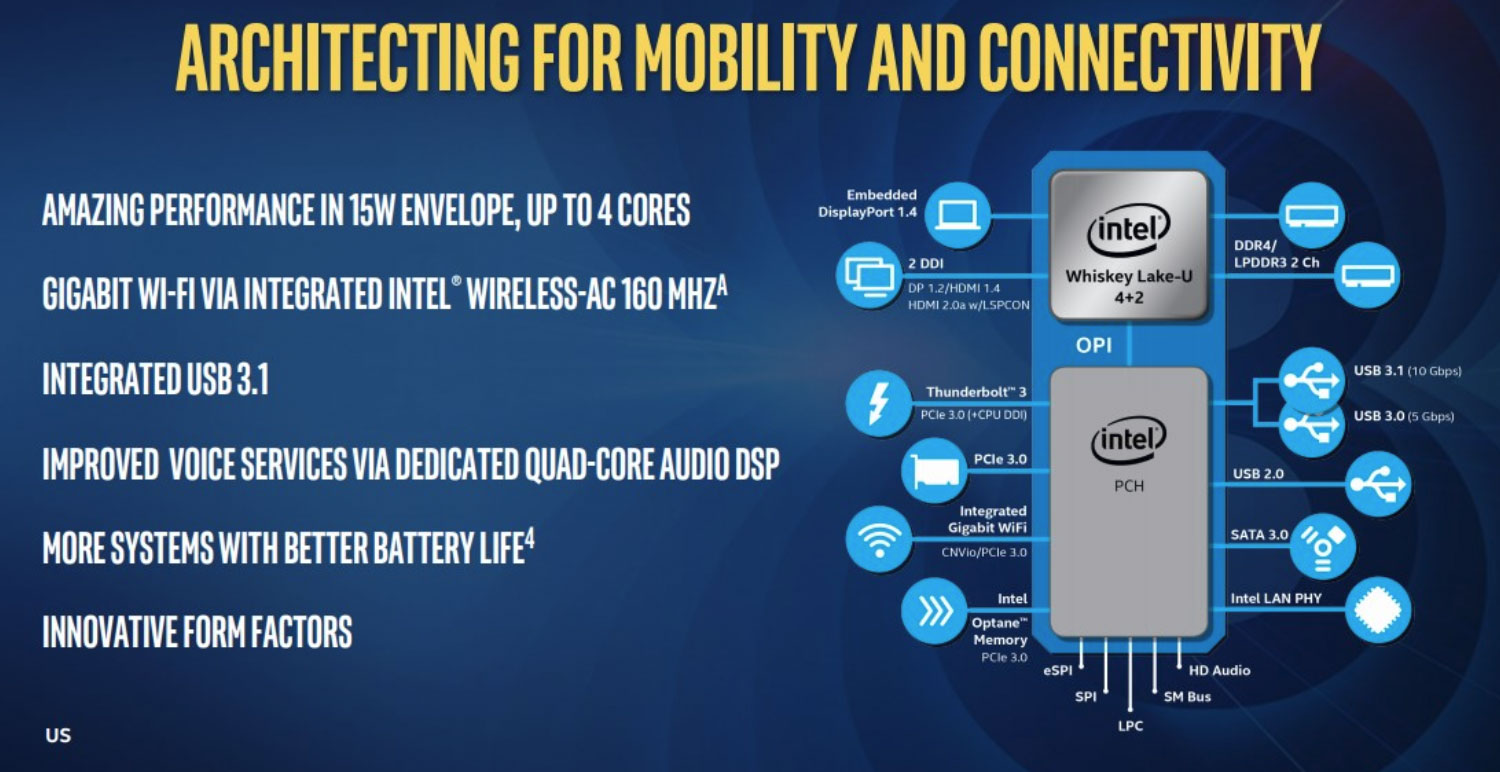 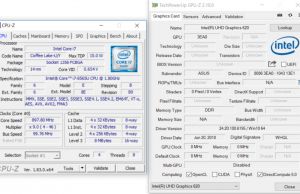 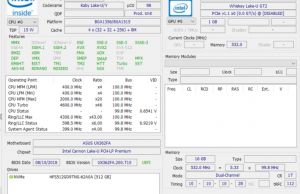 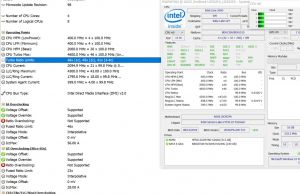 If you’re confused by all this technical mambo jumbo then we can conclude that while the Whiskey Lake platform does offer some deep-layer optimizations over KabyLake-R, at the end of the day that’s going to translate in only a handful of benefits: faster wireless connectivity (up to 1.7 Mbps, but only with matching routers), improved voice command abilities and some performance gains due to the potential higher Turbo Boost frequencies. However, as mentioned earlier, these gains are highly dependent on the cooling implementation’s ability to keep temperatures at bay, and should be minimal with the thinner-and-lighter products, which tend to get hot quickly and can only maintain high Turbo speeds for a few seconds in demanding loads.

We’ve already reviewed several Core i7-8565U ultraportables here on the site, and gathered a handful of various benchmark results below, next to average scores of the previous KabyLake i7s (based on the averages over at Notebookcheck.net, CPUbenhcmarks.net and Geekbench.com, which have a larger data pool of reviewed products) and the Whiskey Lake i5 (based on a larger 15-inch full-size laptop, to be further updated).

Keep in mind that these should only be used for a ball-park comparison, as the performance is going to vary between each implementation, based on the selected cTDP, the cooling’ capabilities and thermal limitations. That’s why we’d advise you to look for detailed reviews of the exact notebook you’re interested in if you want to find out how it performs. These are also early-stage benchmark results based on early or pre-production i7-8565U notebooks, so take them with a grain of salt and expect further improvements with more mature drivers, especially in the 3DMark physics tests. We’ll update the results to make them more relevant as we review other Whiskey Lake devices.

There’s also an i7-8565U UV column above, which shows what can be achieved by undervolting the CPU by -80mV, the stability threshold for all the samples we’ve tested so far.

Undervolting helps lower temperatures and thus allows the CPU to run at high Turbo Frequencies for a longer period of time, which has a significant impact on performance in CPU taxing chores. This article tells you more about undervolting and explains how to safely undervolt your processor, it’s simple and won’t have any negative effects on your hardware.

Let’s take one of the review units, the ZenBook UX433 for instance, a compact thin-and-light 13-inch ultraportable and one of the most thermally constrained implementations of the i7-8565U processor out there. We’re running Cinebench R15 in a loop, with 3 seconds delays between each run, in order to simulate the CPUs performance in demanding loads. Out of the box the i7-8565U stabilizes at 2.3-2.4 GHz, 14.5 – 15 W TDP and temperatures of around 85-88 degrees Celsius, as you can see in the following log.

Once undervolted though, the CPU is able to stabilize at 2.8 GHz, 16.5 W TDP and similar 85-88 degrees Celsius temperatures, which translates in roughly 15-20% improved Cinebench scores. 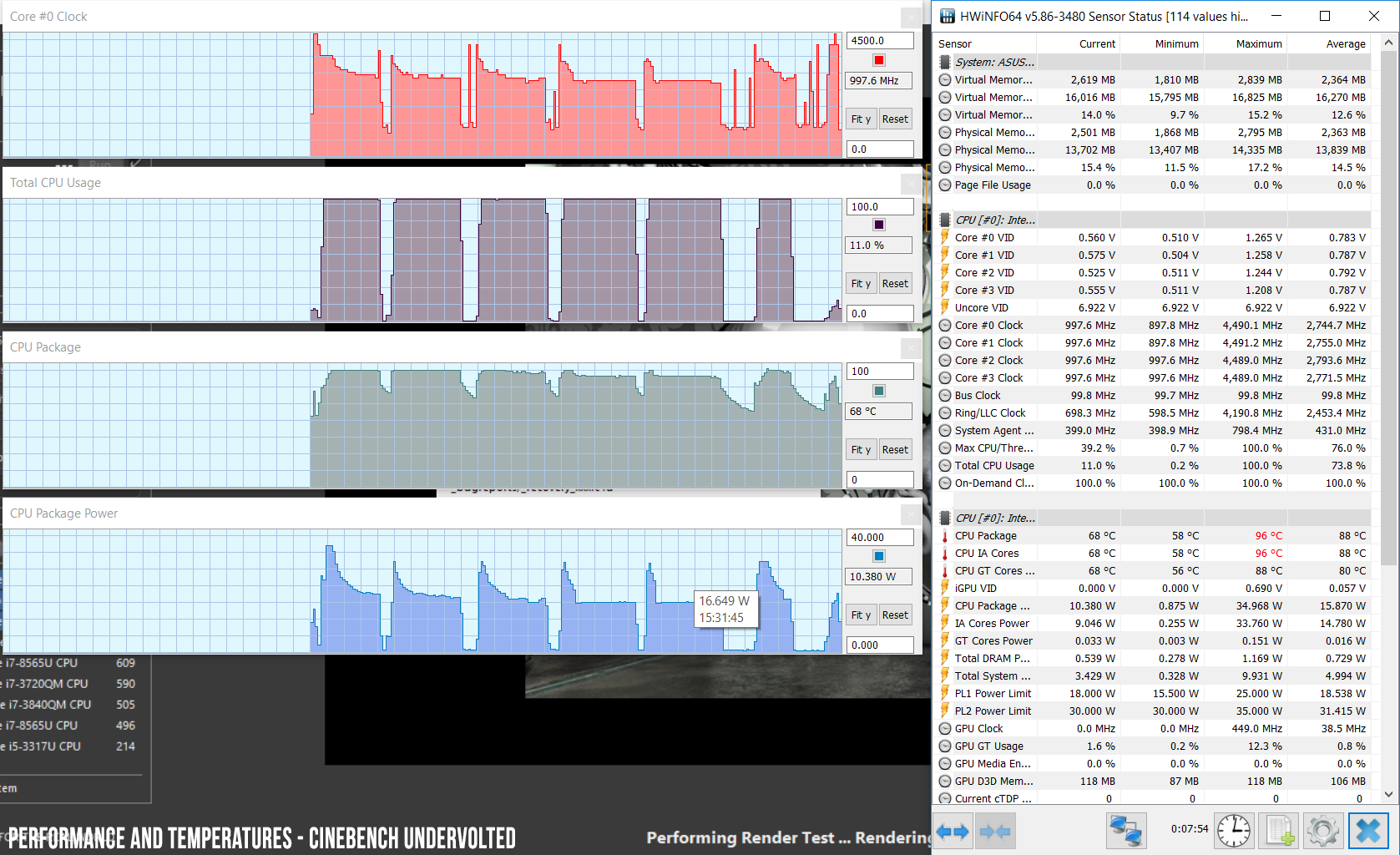 You’ll notice similar results with most other Core U implementations.

Bottom point, the i7-8565U is as of late-2018 and first half of 2019 potentially the most powerful Core U processor the OEMs implement in existing ultraportable laptops. But while it does provide a handful of tweaks over the previous i7-8550U KabyLake-R processor and a performance boost, the gains are rather marginal in real-use and greatly vary between each implementation, which means that you don’t necessarily have to look for one of these Whiskey Lake i7 models and can still find excellent value with some of the i7-8550U builds out there.

This list of all the available Whisky Lake laptops will come in handy if you do want one of the latest launches, and we’ve also covered the other CPUs in this family in separated articles, the i5-8265U and i3-8145U, if you want to see what to expect from those mid and entry-level options.

Disclaimer: Our content is reader-supported. If you buy through some of the links on our site, we may earn a commission. Learn more.
Andrei Girbea, Editor-in-Chief of Ultrabookreview.com. I've been covering mobile computers since the 2000s and you'll mostly find reviews and thorough guides written by me here on the site.
← Previous Story XPS 15 9570 long-term review follow-up: 3 months later
Next Story → UltrabookReview launches Technically Incorrect: a no-BS, non-commercialized tech podcast