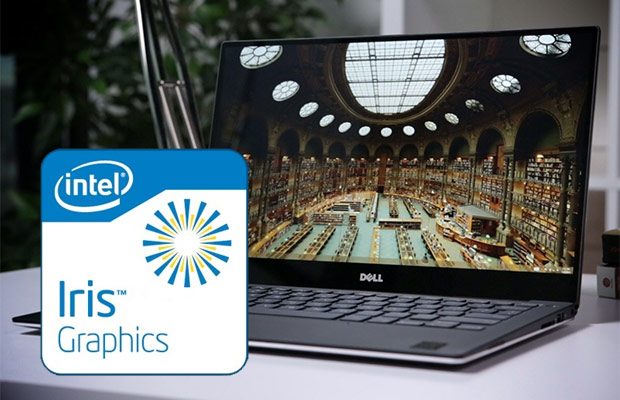 Dell’s XPS 13 is still the undisputed king of Windows (and now even Linux) ultrabooks, delivering more power, style, and portability than any other competitor.

With a price range from $800 to $2130, there are plenty of configuration options for every price point. The only area the XPS 13 (or any other “true” ultrabook, for that matter) could be found lacking in is its graphical number-crunching capabilities. That’s why the announcement of an updated Dell XPS 13 9350 with the newer Intel Core i7-6560U CPU made a lot of people (myself included) excited.

The Intel Core i7-6560U processor bundles an Iris Graphics 540 integrated GPU, as opposed to the Intel HD Graphics 520 found on most other Skylake U-series CPUs. The chart below (information courtesy of notebookcheck.net) highlights the similarities between the two chips.

It is the Iris 540 chip alone that makes the new  SKU of the XPS 13 so tantalizing, as it promises up to a 40% increase in graphics performance compared to the HD 520 variant. The CPUs themselves are mostly the same—in fact, the Core i7-6500U is going to slightly faster in CPU workloads than the Core i7-6560U due to its 300MHz higher base clock (though its Turbo clock is 100MHz lower).

The Iris 540 itself is a relatively big deal because there are no other laptops in this form factor (unless you include the extremely expensive top SKU of the Microsoft Surface 4 Pro) with a relatively powerful GPU, albeit integrated. The ASUS Zenbook UX303UB does have a faster Nvidia Geforce 940M graphics chip, but it’s also larger and lacks the “Infinity Edge” design that has made the XPS 13 so attractive to many. The inclusion of the Iris 540 in the higher SKUs (starting at $1750 at the time of writing) makes them attractive for people who want ultraportablity and are willing to pay for a little more GPU grunt.

However, many were concerned about the real-world capabilities of this new configuration. The Surface Pro 4 for instance suffers from both thermal and TDP throttling. Thus, this article seeks to provide potential buyers with more detailed information regarding the performance and limitations of the XPS 13 with the Core i7-6560U/Iris 540 hardware.

Update: For a more detailed review of the Dell XPS 13 9350 check out this post, and Andrei’s opinion on the series is available over here.

The chart below (information courtesy of Intel ARK) compares the technical capabilities of the Iris 540 and the HD 520 chips.

As you can see, on paper the Iris 540 has a healthy advantage over the HD 520. The question we are trying to answer today is whether or not these specifications translate into real-world performance, making the XPS 13 Core i7-6560U configuration worth its premium over the Core i7-6500U, or even the Core i5-6200U.

As I don’t have access to another XPS 13, this article will compare my benchmarks with reference ones from notebookcheck. My model is the Core i7-6560U/8GB RAM/256GB SSD edition.

My first impression of the new XPS 13 while I was setting it up and copying my files was how hot it ran. I checked HWMon for temperatures and saw the CPU would hit temperatures above 90C while at its Turbo clocks, then drop to 75-80C as the frequency throttled down to 2.2 GHz. This happened while copying files and updating, but those are still alarming temperatures for me to see outside of gaming or stress tests.

Before trying any tweaks, I wanted to get a baseline performance reading using 3DMark. Below is the Intel XTU graph of typical CPU frequency and temperatures under a benchmark load of 3DMark Firestrike.

Package temperatures went close to the 90’s—not something I like to see.

The initial 3DMark score was an uninspiring 1019 points. I’m considering it “uninspiring” because the Intel HD 520 chip, according to notebookcheck’s benchmarks, scores 857 points. This is a 24% performance increase—not the 40% Dell has promised. 1019 was also lower than I expected, even with throttling, as notebookcheck’s model scored 1114 out of the box. This could just be luck of the draw with my model, software/drivers, or the ambient temperatures here in Thailand.

Undervolting with Throttlestop (-80 core/cache, -70 GPU) yielded a slightly improved score of 1049, which was still not the performance I expected. In order to determine whether I could improve on the performance through temperature control, I decided to open the laptop up and repaste it.

Here’s what I found: 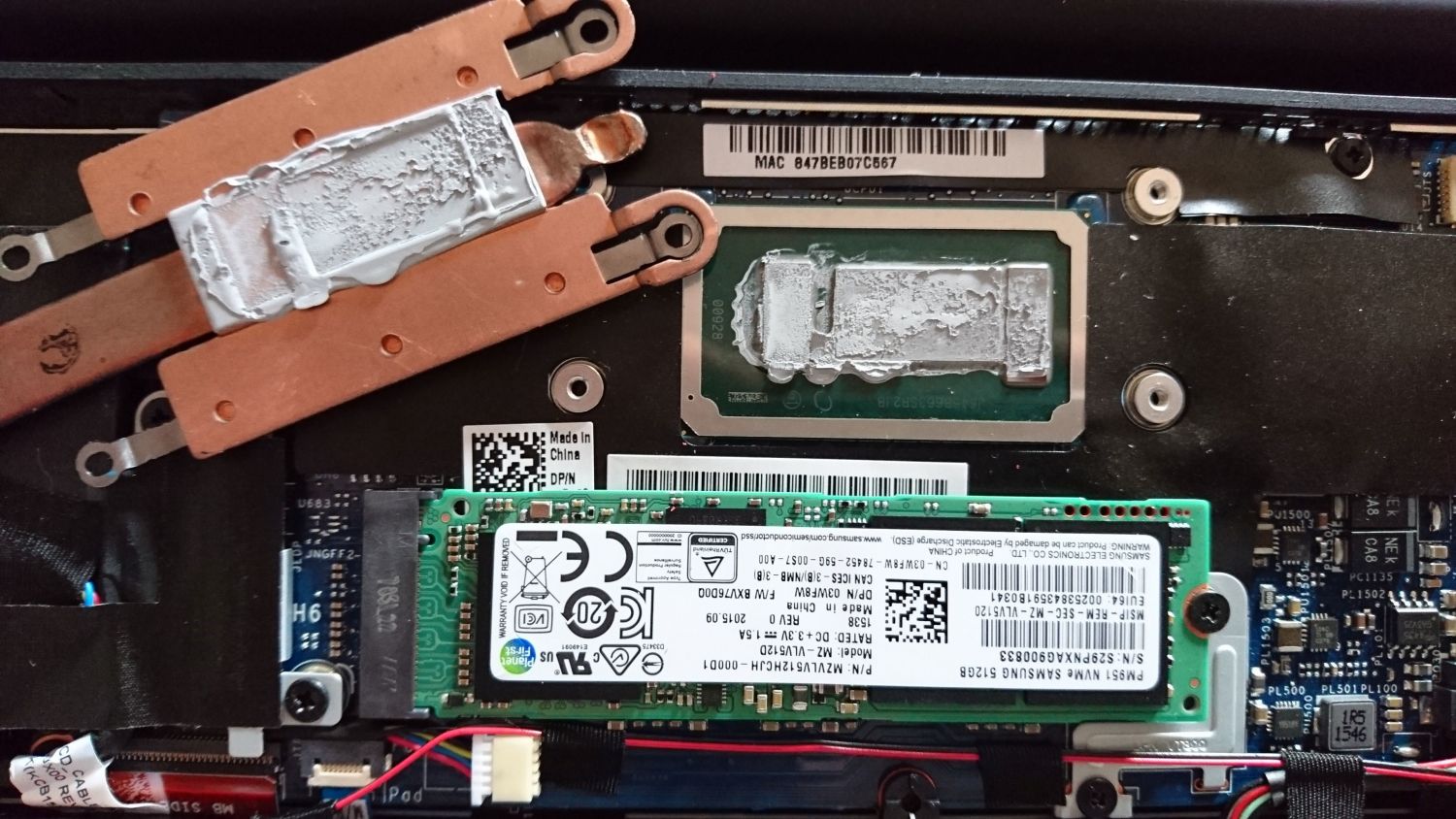 In case you are wondering, that is a lot of paste. I cleaned it off with alcohol and repasted with Gelid GC Extreme. 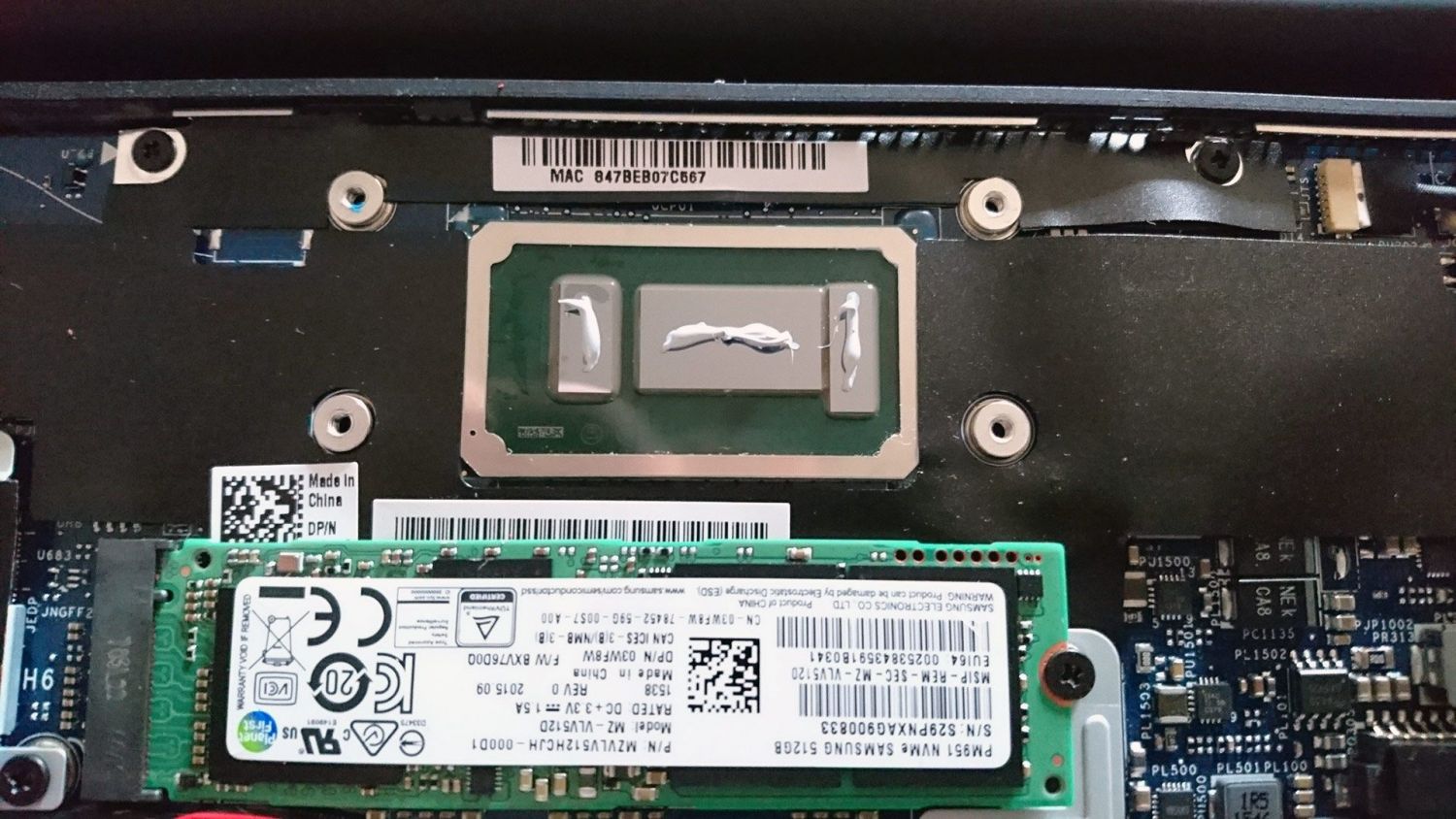 The repaste: with thermal paste, less is more

I ran Firestrike again and got a score of 1179 with temperatures peaking at 91C. This is better—a 39% improvement compared to the XPS 13 i7-6500U’s score, and better than the score out of the box.

The performance was no longer being limited by thermals, but instead by the 15W TDP. As the Iris GPU will use up to 18W at max speed (1050MHz) and the CPU up to 12W, it’s clear that a PL1 limit of 15W shackles the CPU and GPU to submaximal speeds. As a result, the CPU will run at about 1.5GHz while the GPU goes for 600-750MHz during typical gaming loads. You’ll find more details in the picture below.

The bars in the GT: Package-level PL2/3 graph show the time period where the chip is operating at its temporarily higher TDP of 20W. This is the only time the GPU and CPU clocks are able to near their peaks together. This is limited by firmware to only a few seconds at a time. The rest of the time, as demonstrated in the GT: Package-level PL1 graph of the standard 15W TDP the XPS 13 operates under, the CPU and GPU will only run at about half their maximum speeds. 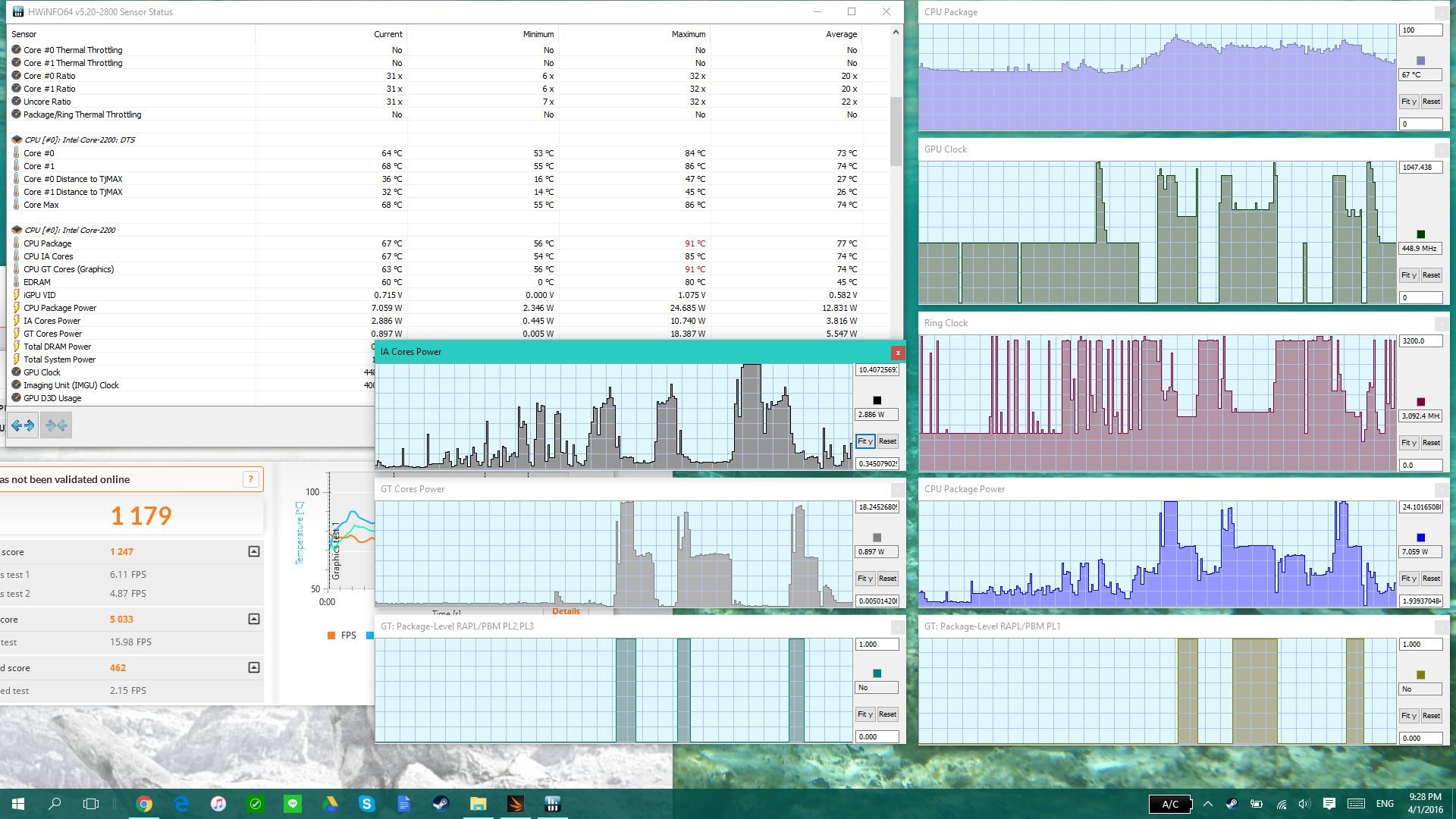 Next I decided to see if I could decrease the temperatures even more using thermal pads.

I placed small 1.5mm pads on the SSD’s NAND chips, a larger square on top of the heat spreader atop the CPU, and two more small ones hugging the heat pipe next to the fan exhaust. This is so the pads will make contact with the aluminum chassis cover, essentially causing it to act as a giant heatsink. I hypothesized this would lower CPU temperatures at the cost of raising surface temperatures—a tradeoff I was willing to make. 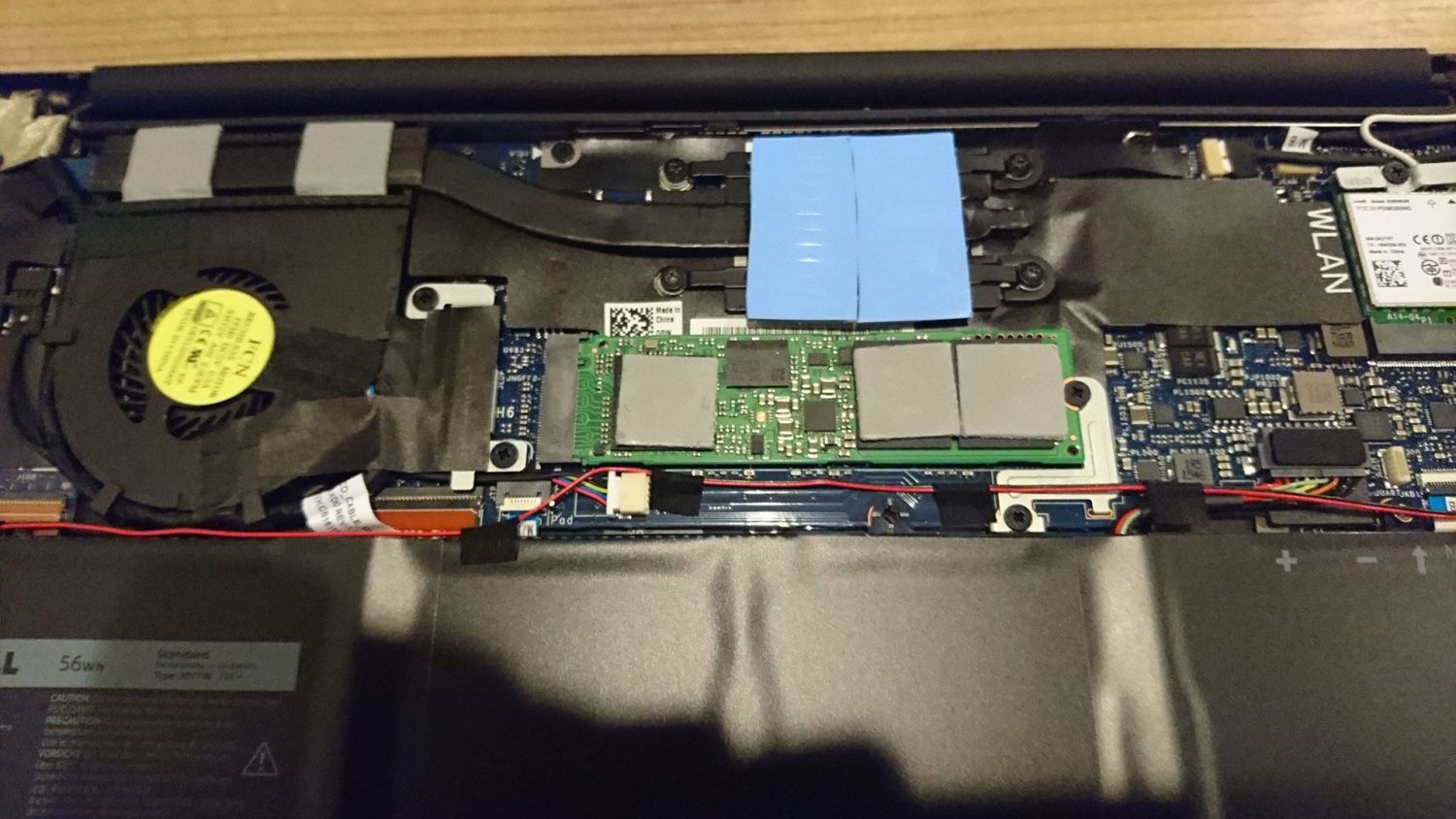 The results were nothing short of amazing: the peak temperature dropped by 15C to a peak of just 76C, while the Firestrike score increased to 1229 points.
The pads did help conduct the heat of the chip to the aluminum shell, effectively making it a huge heatsink.

The cost of the much lower core temperatures is an increase of surface temperature. If this bothers you, it’s easy enough to undo by simply removing the thermal pad from the heat spreader. It didn’t see that much hotter than it was to begin with to me, however. 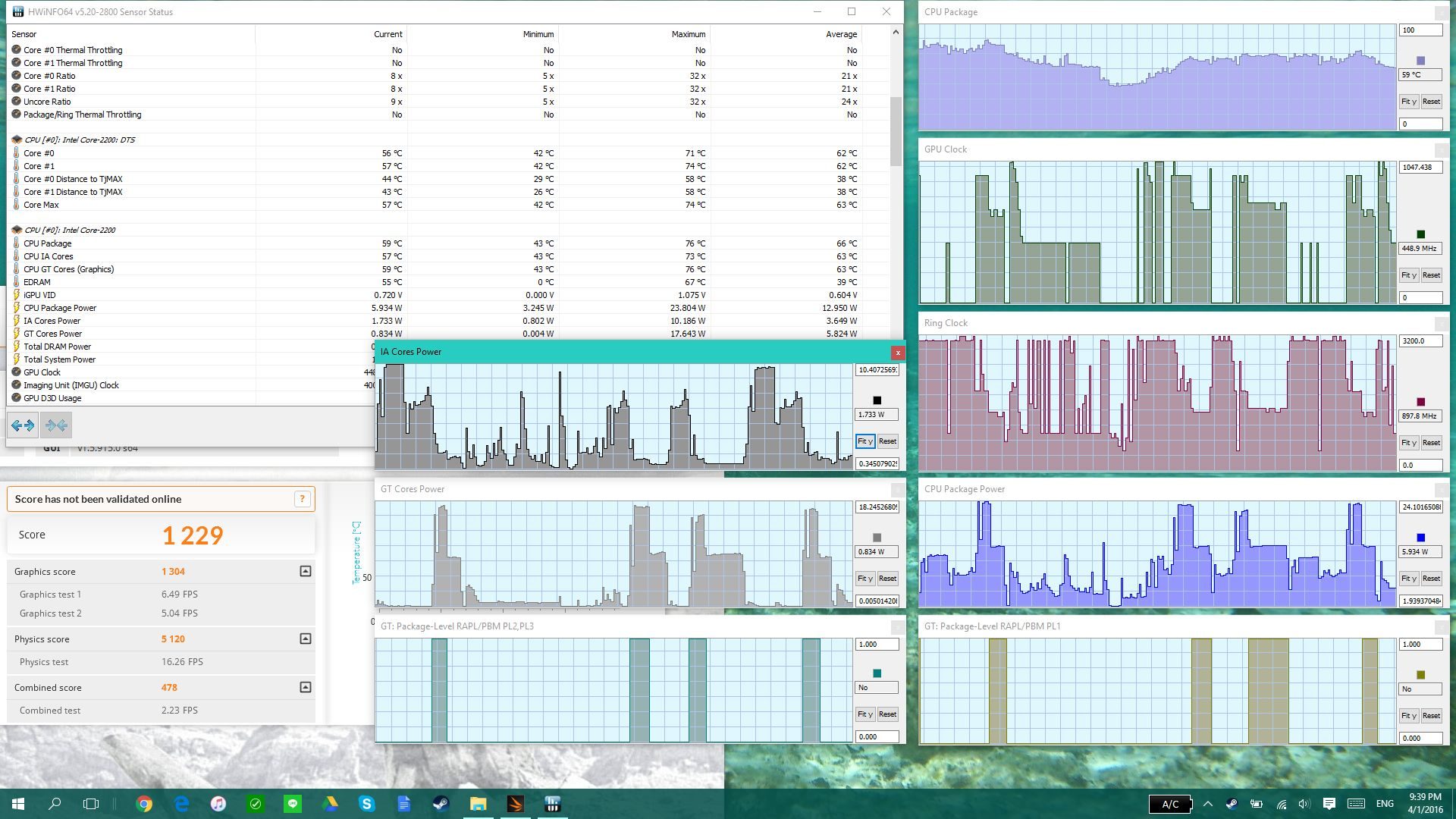 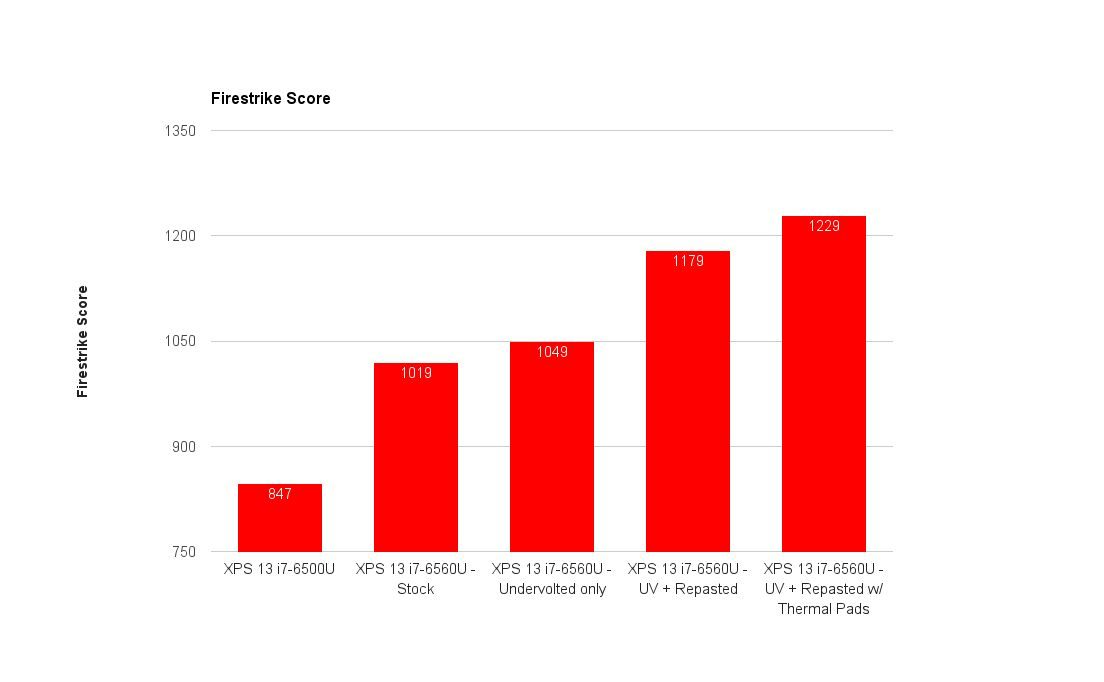 Unfortunately, despite all my tinkering to reduce temperatures, there doesn’t seem to be much I can do to increase the performance any higher due to the 15W TDP. Undervolting produces only a slight increase in performance, but it can’t make a major impact. The Iris 540 chip does have the potential to be much faster—but TDP constraints mean that the CPU and GPU just can’t be both operating at peak performance at the same time.

What this limit translates to for gaming can be seen in the graph below:

After all is said and done, I was able to get the Dell XPS 13 with the Core i7-6560U configuration to score about 45% higher than the XPS 13 Core i7-6500U variant in 3DMark benchmarks. However, this happened with a repaste, undervolting and adding thermal pads to the internals.

Looking at the stock scores and temperatures, you can see how Dell would assume that a 15W TDP was all the machine could handle – and it would be, given the poor job they did with their thermal engineering.

While Dell’s website sells the i5 non-touch and touch for $1000 and $1500 respectively, they can be found for much less on Amazon (for around $200 cheaper than Dell’s website). Meanwhile, the i7-6560U QHD+ version will run you about $1250-1400 on Amazon. If you are okay with paying a premium for a moderate performance bump for light gaming (as the Iris 540 won’t be playing any taxing games on high details at 60 FPS) or applications that make use of the GPU, then the new XPS 13 may be worth it. Keep in mind that this extra power also creates additional heat and dings battery life.

If you’re concerned with battery life, budget, or just don’t plan on playing any games, then the Core i7-6500U or the Core i5-6200U models will provide essentially the same CPU muscle with superior battery life for hundreds less.

Follow this link for our full review of the Dell XPS 9350, this one for Andrei’s opinion on the 9350 series, after using the XPS 9343 for 18 months, or check out this list of the best ultraportables you can find in stores these days.

Disclaimer: Our content is reader-supported. If you buy through some of the links on our site, we may earn a commission. Learn more.
Douglas Black is a Technical Writer, Analyst, Teacher, and DJ currently based in North Carolina.
← Previous Story Dell Alienware 17 R3 review – high-performance gaming laptop
Next Story → Asus Zenbook UX303LB – gaming ultraportable with Nvidia 940M graphics